First Ride Proves This Is No Gussied-Up Audi Q5 The misinformation first started back in May of 2007 – more than six years ago – when word came that Porsche was developing a compact utility vehicle to fill out its product line. Rumors swirled that the German automaker's future "Roxster" would be based on the then-upcoming Audi Q5. By September of 2010, the name had changed to "Cajun," but the vehicle was still expected to be "based heavily on the Audi Q5," said reports in the months that followed. One year later, the first test mules were spotted, the mechanics hidden beneath barely disguised Audi sheetmetal, which did nothing to give the upcoming model its own identity. And even after Porsche announced "Macan" as the vehicle's production name in early 2012, articles stated that it would "arrive on the same chassis as the Audi Q5, though with suspension, brake and engine tweaks suitable to the Porsche range."

It's no wonder that most still consider the all-new Porsche Macan nothing more than a heavily massaged Q5.

To help lift some of the mystery surrounding its latest release, Porsche hosted us in Germany for an in-depth look at its new crossover (while Europeans call it a "sport utility," its car platform allows us to call it a proper CUV). The technology workshop offered us insight to the design and mechanical execution, and it concluded with a short test ride. The trip was both enlightening and educational – and it left us with a whole new perspective on the Macan. 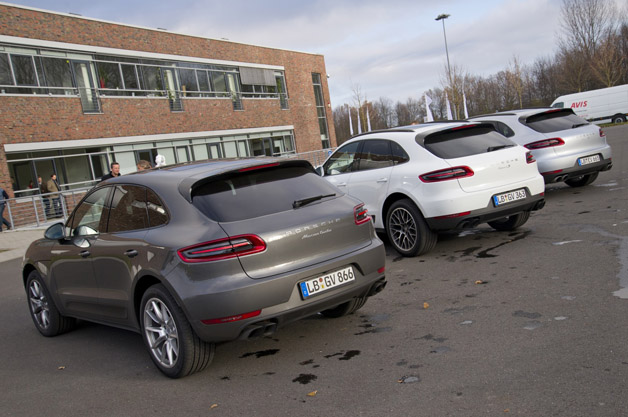 The Porsche Macan is built on the Modular Longitudinal Platform (MLP) proliferating throughout the Volkswagen Group. It's an architecture currently shared with the Audi A5, A6, A7, A8 and Q5. Its performance-oriented architecture allows a longitudinally mounted engine with a differential in front of the clutch for better weight distribution. While Volkswagen offers its scalable MLP in many lengths, the Macan rides on a 110.5-inch wheelbase, which is identical to the Audi Q5.


The Macan S is about 300 pounds lighter than the SQ5.

As expected from platform-sharing cousins, the pan (floor stamping) and firewall are common. The basic suspension architecture, power steering unit and rear brakes are also shared, but each has been modified by Porsche for its new role. Aside from those major components, and the standard hidden-from-view electrical and mechanical subsystems shared with other vehicles in the VW Group, nearly everything else on the Macan is unique. 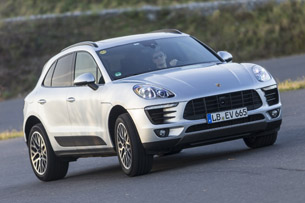 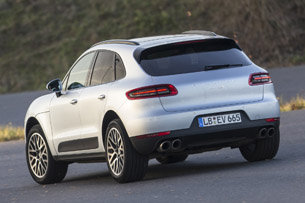 The exterior paints a clear picture of Porsche's crossover design language – it looks like a mini Cayenne from most angles. The shape is relatively sleek (0.36 coefficient of drag), with side mirrors mounted on the door panels and an integrated rear lip spoiler at the top of the liftgate. Unique side accents – available in carbon fiber or painted – are found low on each door and visually shorten the Macan's overall height. The most fascinating part of the model's styling is its unique front clamshell hood. Its aluminum skin is actually comprised of two panels, sandwiched together, with air passages between them to comprise an integrated duct system that feeds air into the intakes on each side of the engine. The approach is innovative and effective, plus it provides an extra cushion of safety for pedestrians, should they ever meet the Macan head-on. We'd toss a few more points to the Porsche engineers for designing the world's easiest and cleanest one-hand hood release, too.

While most in this segment are using eight-speed automatic transmissions, Porsche has chosen to raise the Macan's performance envelope by using its lightning-quick, seven-speed PDK dual-clutch automated gearbox – a first in a utility vehicle. The electronically controlled transmission provides buttery smooth – or rapid-fire – shifting based on its selected drive mode (Sport, Sport Plus and Off-Road). Models with the optional Sport Chrono package will offer launch control. 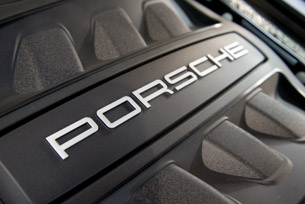 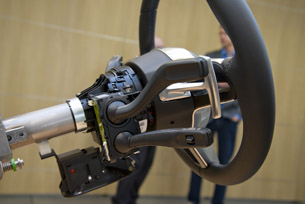 The performance-based PDK transmission, redesigned to accommodate an integrated front-axle differential, is an integral part of the standard Porsche Traction Management (PTM) permanent all-wheel-drive system. While many systems split their power front-to-rear in preset stages or wait for available traction to dictate their operation, the Macan's AWD provides infinitely variable, on-demand torque distribution between the front and rear axles with a response time of under 100 milliseconds. Even though there is no set split ratio between the axles, Porsche engineers explained that the system has been designed to be heavily rear-biased. After another round of interrogation, and being assured that the all-wheel-drive system is not common with the Cayenne, Porsche revealed that the setup on the Macan is shared with the 911 Carrera 4 – another indication that the automaker has serious performance aspirations for its new compact utility.


The AWD setup on the Macan is shared with the 911 Carrera 4.

Racing the stopwatch, Porsche conservatively says the standard Macan S will accelerate to 60 miles per hour in 5.2 seconds (5.0 seconds with the Sport Chrono package) and not run out of steam until it hits an aerodynamic wall at 156 mph. The more powerful Macan Turbo will do the same sprint in 4.6 seconds (4.4 with the Sport Chrono package) and top out at 165 mph. Those figures are segment-leading, all around, and most likely conservative.

Even though the independent suspension is similar in architecture to the Q5, with an aluminum five-arm wishbone setup in the front and a self-tracking trapezoidal link in the rear, Porsche offers its Active Suspension Management (PASM) with air suspension at all four corners. While the pneumatic dampers improve the highway ride and provide chassis load-leveling, they also allow the driver to raise the vehicle for improved off-road prowess, or to drop the chassis to ease loading. From minimum to maximum, there is a 3.5-inch variance in chassis height. Lastly, to improve grip, the rear axle has an electronically controlled differential lock. Optional Porsche Torque Vectoring (PTV Plus) is said to improve turn-in and stability when the road gets twisty. No other vehicle in the segment offers an air suspension or torque vectoring. 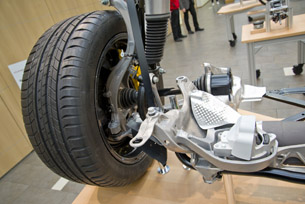 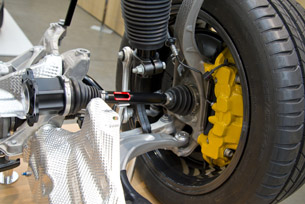 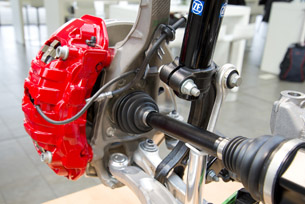 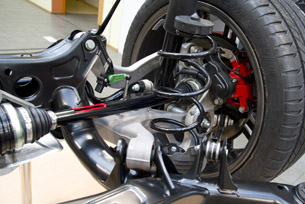 The front brakes are six-piston fixed calipers, sourced from Brembo, clamping down on ventilated iron rotors. The rear calipers are single-piston sliding units, a configuration we cannot recall Porsche using in decades, over a ventilated iron rotor. When asked, an engineer explained, matter-of-factly, that the rear braking system, along with its integrated electric parking brake, was carried over directly from the Audi Q5. Even when upgraded with the optional Porsche Carbon-Ceramic Brakes (PCCB), another first in this segment, there is a single-piston sliding caliper over a ventilated ceramic rotor.


This is the first time that a Porsche SUV has been equipped with an electro-mechanical steering system.

Porsche has been color-coding its brake calipers for years, and the Macan is no exception. Standard models (including the Diesel that is not yet offered in the States) have black calipers, while Macan S models have silver calipers. Red calipers designate the Macan Turbo models, while the yellow calipers are reserved for the PCCB setup.

As mentioned, the electro-mechanical power steering architecture is shared with the Q5, but it has a quicker ratio (14.3:1 compared to 15.9:1) and it has been designed to have a heavier feel from behind the new 918-inspired multi-function steering wheel. This is the first time that a Porsche SUV has been equipped with an electro-mechanical steering system, but the engineers explained that it is optimal for this application, as its self-contained design (the motor is contained within the rack) provides excellent packaging and its active steering capabilities integrate well with the optional Lane Departure System (LDS). 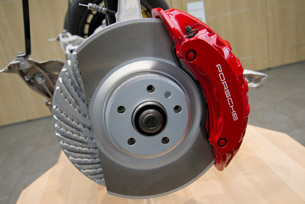 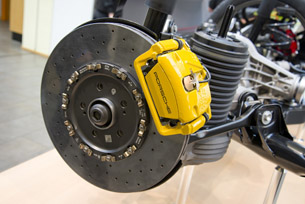 The Macan rides on staggered-size rubber front and rear (all Cayenne applications are "square" setups, meaning all tires are the same size). This configuration, common on the automaker's sports cars, was chosen as it increases traction and enhances stability with the vehicle's unique all-wheel-drive system – remember, the latter was designed for tail-heavy 911s.


There was noticeable body roll, but the AWD system clung to the pavement with tenacity.

The automaker offered us a few short rides in the Macan at a small training center in Grevenbroich, Germany, just southwest of Dusseldorf. We were not allowed behind the wheel – our first drive will happen in a couple of months – but this experience did give us the opportunity to observe the Macan's driving dynamics from the passenger seat.

First up were some high-speed laps around an undulating half-mile road course that was chock full of off-camber turns, hills and dips. It didn't help that the pavement was wet in certain spots. The factory driver pushed the Macan S hard in each of the driving modes, demonstrating how PDK and PTM operated under the different programs. As predicted, the compact CUV lapped with little drama – of course, we didn't expect it to go sailing into the woods. There was noticeable body roll, but the AWD system clung to the pavement with tenacity (the vehicle was fitted with all-season tires) exhibiting little understeer in the process. The most impressive part of our track venture was feeling the Macan soar over a sharp, unsettlingly tall rise in a 65-mph corner, yet completely maintain its composure and quickly recover as the suspension compressed on the other side. Utility vehicles, with their attendant tall centers of gravity, don't typically act like that. 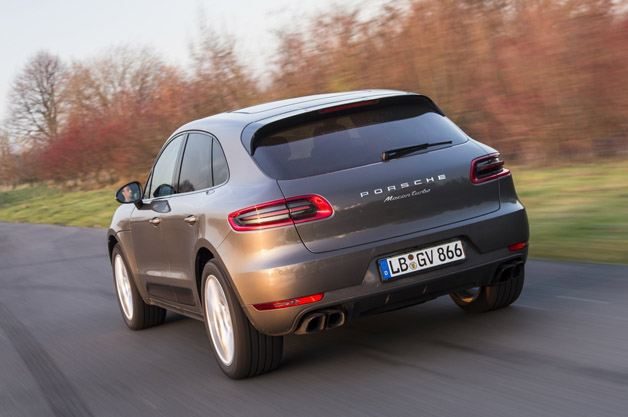 It is a sports car trapped in the shell of a crossover.

Porsche admits that the Cayenne is more capable off-road (while simultaneously admitting the Macan is the better track star), but we still went for a ride on a semi-challenging dirt- and rock-strewn loop at the venue. Ride height and suspension articulation weren't an issue, but a very steep climb on a loose surface had PTM clawing ardently for traction. The Macan made it up all of the hills and across the 45-degree slope with dignity (Porsche also showed us a video of it "dune surfing" in the Middle East), but there are better vehicles for the job – most with locking differentials. If we had a Macan in our garage, we'd choose something else for a Moab or Rubicon trip.

Those two quick test rides revealed the true character of the Macan – it is a sports car trapped in the shell of a crossover.

While all of the competition (fingered as the Audi Q5, BMW X3 and Mercedes-Benz GLK-Class) remain focused on building smaller versions of their fullsize utilities, Porsche appears to have taken a different approach. The Cayenne remains its family hauler, with towing and off-road capability, while the Macan is a tall, utility-minded sports car that just happens to look like its larger sibling.

After focusing on the engineering, it is hard not to be impressed with the amount of resources Porsche has invested to ensure that its small crossover is unique and very exciting to drive. While we will hold off final judgment on the all-new model until after we get a nice stint behind the wheel, a full day with the automaker's new baby made one thing perfectly clear – dismissing the Macan as a rebadged Q5 reveals nothing but naivety.