Has there been any other vehicle in automotive history so maligned by those who don't know or understand it, yet so loved by those who do? Critics typically see the Chevy Volt as an electric car with a pitiful 38-mile range (as if the range-extending engine/generator weren't there), while media testers give it rave reviews and owners offer industry-best customer satisfaction scores.

Like a lot of folks, I loved the Volt's EREV (extended-range electric vehicle) concept - the idea of running on grid-provided battery power for the first 35-40 miles before a small, fuel-efficient gasoline engine starts, if needed, to keep you going - but was skeptical before driving one. My first encounter was a one-day press drive on mostly urban streets, about which I wrote nearly three years ago. My electric/gas composite " fuel economy" for 82.2 total miles (the first nearly 40 miles consuming no gas at all), some of them aggressive, was an eye-popping 81.5 mpg. Beyond that, it was also a surprisingly responsive, comfortable and pleasant car to drive. A while later, I picked up a Volt in the Detroit area, drove it to a meeting, then 80-plus freeway miles home on just over a gallon of gas. For the next several days, I used it for local trips, topping off the battery on 120V in my garage, and burned not one drop more.

Now I've finally been able to enjoy a second opportunity to live with a Volt as if I owned it. I picked it up on a Friday at the Detroit Metro airport with 38 miles on the EV range gauge, and 350 on the full battery/gas tank combo. I ran the first 31.8 miles on battery energy at freeway speeds before its 84-hp DOHC dual-VVT 1.4-liter four started (imperceptibly) with 303 gasoline miles remaining in its 9.3-gallon tank. About an hour later, I pulled into my garage with an indicated 254 miles showing on the gas range gauge. With the Volt consuming no gas for those first nearly 32 miles, then just 1.4 gallons for the final 54, my composite economy was 58.9 mpg.

Following an overnight charge, I drove it to the Detroit area and back Saturday night, burning 4.1 gal. of gas in 180.9 miles at mostly freeway speeds. That resulted in 44.0 composite mpg and left 110 miles of gasoline range. When I plugged it in at 1:00 a.m., the Volt told me its battery would be fully charged at 4:15 p.m. the next day. Yes, 120V is slow!

But Sunday afternoon I had to pick up my wife and her sister at the Grand Rapids airport (about 70 miles west) at 3:30 p.m., so I departed at 2:15 with an indicated 34 miles of EV range (and 145 total) on the gauges. Once both ladies and their luggage were comfortably aboard, I topped off the Volt's tank with 6.5 gallons of premium ( Chevy requires the high-octane gas and says it adds 5-10 percent efficiency by enabling more spark advance and a higher compression ratio) before heading home. That trip totaled 139.4 miles on 3.0 gallons for a composite 45.2 mpg. 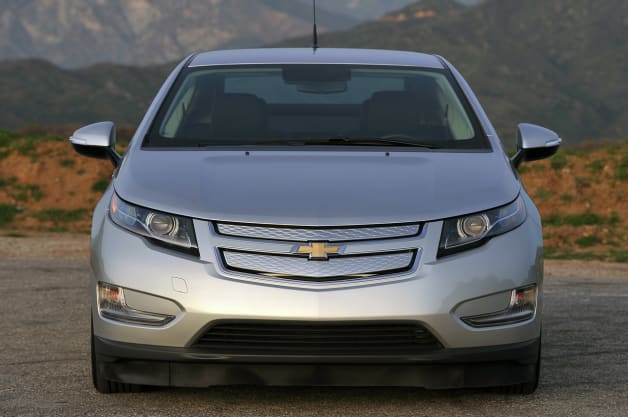 The Volt enjoyed a day of rest and recharge before heading back to Detroit Metro Airport Tuesday morning (with 36 miles of indicated EV range) for a short two-day trip, and I decided to park in the big deck across from the terminal, where EV charging is available on the eighth level (thanks to DTE), instead of in my usual satellite lot. It took several minutes to find the (just two) EV charge stations, which of course were already occupied. Good thing I was driving a range-extending Volt that would get me home on gas instead of a "pure" EV that wouldn't!


When the press car guys picked it up later that morning, I hated to see it go.

By the time I found a regular slot in the nearly-full deck, I had driven 88.8 miles on 1.4 gal. for 59.9 mpg composite economy. And when I returned early Thursday morning, I was reminded why I always use the satellite lot: my parking bill for two days was $40 - compared to the $15 discounted rate I would have paid had I not decided to attempt an airport charge. The 87.6-mile trip home used another 3.9 gallons for a round-trip composite economy of 44.6 mpg, and 98 miles of gas range remaining. When I plugged in at 9:00 a.m., its battery was projected to be full by 1:00 a.m. Friday morning. According to the "B" trip meter (which I never reset), my entire 583.1 miles of driving over six days, the majority at freeway speeds, had burned just 12.6 gal. for a composite rating of 46.3 mpg. No wonder Volt's owners love it! And when the press car guys picked it up later that morning, I hated to see it go. Except for the lack of available chargers at the airport, it had been a great six days of Volt-owner experience. 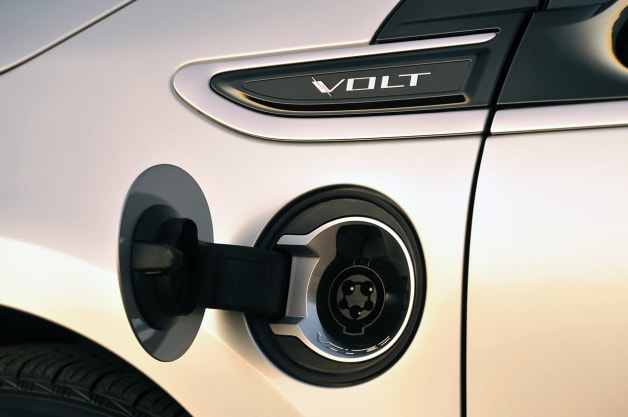 While I love driving EVs, especially on cheap grid energy, and fully understand their appeal to folks with only short-range driving needs, if I were to own one - living in mid-Michigan, 70-90 miles from most places where I regularly need to go - it would have to be an EREV. With a pure EV, I would need a second liquid-fuel vehicle for all those longer trips.

But with its complex dual-powertrain system and its big, expensive battery, the no-range-anxiety EREV's killer shortcoming remains its high cost - one good reason why no other automaker save upside-down Fisker (and, soon, BMW) has yet offered one. Chevy has recently addressed that issue by discounting the Volt another $5,000. And much cheaper, more energy-dense li-ion batteries are rumored to be just around the proverbial corner. Meanwhile, I can't wait to drive that gorgeously slicker, quicker, more athletic (but much less practical) 2015 Cadillac ELR EREV. More fun than Volt, but at a much higher price.