Minicars have yet to really catch on in the US, and while the reason for that is probably at least partially because of our addiction to big crossovers and SUVs, we have a feeling that some of the indifference toward these tiny cars is the lack of functional practicality and efficiency that such small vehicles offer – especially relative to vehicles the next size and price rung up. Looking at the current class of sub-subcompact cars, which includes the Chevrolet Spark, Fiat 500, Smart Fortwo and Scion iQ, only the Spark and 500 provide realistic interior space, and the baby Bowtie is the sole offering in its class large enough to offer a rear set of doors.

The Spark – in one name or another – has been on sale in other markets since 2009 and has sold relatively well, but in the name of globalization and diversifying its lineup, Chevrolet brought it to our shores for 2013. General Motors hasn't marketed a car this small in the US since the Geo/ Chevy Metro, and just like the Metro was the product of a collaboration with Suzuki, the Spark is a product of GM's South Korean operations. With its addition to the lineup, Chevy's menu of passenger cars is now bursting with options, but can this pint-sized hatchback ignite any interest with buyers here in the US? We spent a week with one to find out if it could hold our attention – and our stuff.
Maybe it's just the segment in which the Spark competes, but Chevy's minicar doesn't appear to scream for attention with its shape or dimensions as much as its rivals. As American buyers are still warming to these micro machines, though, we don't consider being the segment's wallflower such a bad thing. Resembling something like a scaled-down Chevy Sonic, the only thing about the Spark that truly grabs your attention is its flamboyant color palette. Our tester came in Jalapeno Green, but there are also a handful of pastel hues including pink, blue and yellow.

The biggest distinction for the Spark is its extra set of doors.

Although a little rhinoplasty wouldn't hurt the Spark, it's a rather good-looking car for its size... especially after your eyes take in the odd proportions of the Smart Fortwo and the Scion iQ. Sure, it's shaped like a doorstop, but its arched roof, sharply rising beltline and boxy rear end give it a more conventional appearance in a segment where quirky designs have become the norm. After factoring in the car's standard look, our tester added the 2LT trim, which tacks on unique facias with fog lights up front and a chrome exhaust tip poking out the rear, sportier rocker panels, silver roof rails, small amounts of chrome trim and 15-inch aluminum wheels with black accents, all of which help further differentiate the Spark in this class.

The biggest distinction for the Spark is, of course, its extra set of doors. Rather than squeezing between the front seats and B-pillars, the doors make the two-passenger rear seating much more accommodating. In total, there is plenty of room for four adults to travel comfortably with short road trips only limited by cargo space rather than passenger comfort. Rear occupants are separated by a cupholder and storage bin ensuring generous amounts of hip and shoulder room to go with a decent amount of head and legroom, which happens to be considerably roomier than the larger Ford Fiesta. Cargo space with the seats in place is limited to just 11.4 cubic feet, but folding the rear seats down practically triples available cargo space. Unfortunately, folding the 60/40 split seats is a tricky three-step process that still doesn't result in a flat load surface.

Unlike what we were taught to believe about inexpensive cars, the Spark is no stripper.

Equally surprising as its passenger space, the Spark has a pleasantly styled interior. Don't worry, there is plenty of chintzy plastic to complain about, but the overall layout makes the materials easy to overlook. Again, the Spark borrows some styling cues from the Sonic, including its motorcycle-like gauge cluster with a large speedometer and small multi-function digital display. Unlike what we were taught to believe about inexpensive cars, the Spark is no stripper – air conditioning, power windows and power door locks all come standard.

Though starting at an inexpensive base price barely topping $12,000, this Spark 2LT topped out at almost $16,000, which comes within spitting distance of much larger vehicles. Hoping to attract younger buyers, all LT trims get the Chevrolet MyLink infotainment system as standard equipment, which provides popular apps like Pandora and Stitcher and a well-integrated navigation system. The same cannot be said for the Fiat 500 and its dash-mounted nav-on-a-stick or Scion's aftermarket-looking system. Stepping up even further, the 2LT adds heated front seats, cruise control, a leather-wrapped steering wheel with audio controls and leatherette on the seats. The latter feel just like vinyl, but there is a fancy pattern and exposed stitching to spice up the look a bit more. Certain exterior colors (including Jalapeno Green) get body-color matching interior pieces for extra flair.

Its little 1.2-liter inline four-cylinder engine out-powers only the Fortwo in this class.

If this car needs some extra flair anywhere, though, it's under the hood. Not that we expect a bargain-priced minicar to come with lots of power (we can dream, can't we?), but the Spark's little 1.2-liter inline four-cylinder engine out-powers only the Fortwo in this class, despite being its biggest member. Our tester's 84 horsepower and 83 pound-feet of torque were sent to the wheels via a five-speed manual transmission, but two-pedal fans can opt for a four-speed automatic – or a new CVT in 2014. As we learned during our First Drive, the four-speed auto isn't an awful choice, but if you don't like playing on-ramp roulette every time you merge onto the highway, then the manual is a wiser choice (the auto adds whole seconds to the already double-digit 0-60 mph time). Even though the Spark is the largest minicar currently offered, its fuel economy is still class competitive with official EPA numbers of 32 miles per gallon in the city and 38 mpg highway. Keep up with the Spark's tach-mounted shift light, and you'll have no problem meeting or exceeding those official numbers. We averaged just over 34 mpg during our week of mixed driving with the Spark.

Thanks to its added size, the Spark is arguably the best daily driver in this segment, mostly on account of the fact that it feels more stable on the highway where crosswinds or passing tractor trailers aren't religious experiences. While the Spark isn't scary to drive at higher speeds, it is undeniably a city car, as evidenced by the transmission gearing that leaves the low-power engine racing at more than 3,000 rpm at 70 miles per hour. Speed isn't the Spark's specialty, though, as this little hatchback really excels in city driving where its small size equates to excellent maneuverability.

The Spark has the whole segment nailed when it comes to balance and ease of driving.

Looking at the competition, the Fiat (especially in Turbo or Abarth trim) is far more appealing to drive, while the iQ is a winner in the tightest turning radius competition, but the Spark has the whole segment nailed when it comes to balance and ease of driving. For starters, the Spark's electric power steering is perfectly suited for low-speed parking maneuvers, while the standard hill start assist makes stop-and-go traffic easier to bear, especially in hilly cities. The suspension tuning leans toward the firm side, but not so firm as to make its short wheelbase hop all over the road. Potholes, cobblestones and speed bumps are all taken in stride by the Spark's suspension.

After about a year on the market, the Spark has found the most success, according to Chevy, in cities like San Francisco, New York, Los Angeles and Chicago. This makes sense for anyone who drives and parks in such dense cities. The small size and relatively high level of comfort that the Spark provides leaves this car feeling less like the big fish in a small pond of minicars, and more like a small car designed just for the big city.

In the not-too-distant past, "inexpensive" and "cheap" were interchangeable words among GM's lineup of small cars, but the 2013 Chevy Spark is proof that this automaker can build a quality car that is also affordable. Furthermore, the Spark one-ups its competition by being priced much lower than the Scion iQ and Fiat 500 and offering a more practical size and powertrain than the Smart Fortwo, all while coming with a styling that is neither frumpy nor goofy.

What's next for this small segment? By next year, each of the four minicars currently on sale will add an all-electric model, which will bring a whole new level of competition to the class. Sitting amongst a set of vehicles that seems to attract with quirkiness, the Spark just does what's expected of it without any excitement or surprises, and that's all we can ask from Chevy's smallest, lowest-priced model. 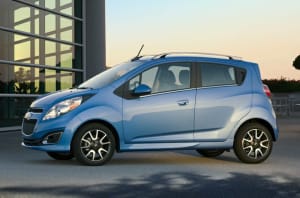