The revised 2013 Acura RDX has found at least one happy customer, and it's an important one: Consumer Reports. The editors at CR gave the RDX crossover their top rating of "Recommended" after Acura ditched the turbocharged four-cylinder that had served as the RDX's sole powerplant since its launch in 2006.

Praise was heaped upon the new powertrain, which features the Honda corporate 3.5-liter V6 in a 273-horsepower state of tune mated to a six-speed automatic. But CR was unimpressed with the new, less-sophisticated all-wheel-drive system in the RDX, which was slow to transfer power rearwards.

Editors liked the redesigned RDX's softer ride, but were much less enthusiastic about its handling, which was judged inferior to the BMW X3 and Audi Q5. The BMW scored highest in the magazine's testing and the Audi also received a Recommended rating. The X3 was not recommended due to an inability to predict the reliability of BMW's new 2.0-liter turbocharged four-cylinder engine.

CR called the RDX's 22 mpg combined fuel economy "respectable" and predicts that its reliability will be "average or above," leading to the magazne's new endorsement.

Scroll down to watch the full video review. 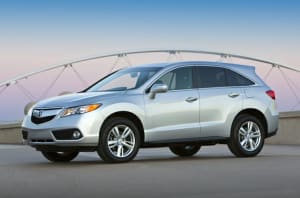