As we assembled media and executives sat down to dinner in Washington, D.C. the night before driving the 2011 Saab 9-4X, a waiter leaned over my shoulder with a bottle of sparkling water and poured it into a waiting rocks glass filled with ice and a lemon. He paused, staring intently at my glass. Clearly flummoxed, the dinner service ground to a halt. "May I, sir?" As I had no earthly idea what was troubling him, I nodded. "Certainly." He picked up the glass, reached into its mouth and fished out the lemon only to squeeze it with much theater. The wedge yielded but a drop or two of juice. "Dry!" he pronounced with a mixture of pride and embarrassment. Perhaps reading the confusion on my face, he followed this proclamation by saying "You can 'ell becooze.... it was... ah.... reluctant to float." He then disappeared into the back of the restaurant for what seemed like minutes, reemerging with a new glass filled with ice and a noticeably plumper wedge of citrus riding atop the rim of the glass.

You just never know what's going to hold up a car launch.

Stick around in this business for a while, and you'll see how labor unrest, cash crunches, bad mergers and natural disasters can wreak havoc on a new automobile's gestation and production schedule. We thought we'd seen it all, but the poor folks at Saab are surely trying for some kind of record with the number of calamities threatening to scrap not just the launch of this 9-4X, but the Swedish brand altogether. In fact, this handsome looking crossover is already late to the party – it was originally slated to launch in 2009 alongside its General Motors' platform-mate, the Cadillac SRX.

Given the strong initial sales of the SRX, you might think that Saab's ownership expects big volume out of its first proper crossover (the late and not lamented 9-7X was an SUV and the 9-3X is little more than a wagon on stilts). But based on our conversations with company officials, not so much – they're looking to shift just 10,000 units globally in 2011 – a seemingly trifling sum until one looks at Saab's miserable sales figures worldwide. Continue reading...

Based on looks alone, and despite its tortured birthing and ill health of its parent company, the 9-4X deserves a chance. At once crisp and organic, this Saab looks nothing like its more angular Ramos Arizpe, Mexico-built cousin. From its cantilevered roof to its sweeping "hockey stick" greenhouse, ice-block blue headlamps and full-width LED taillamp band that echoes that of the 9-5 sedan, Saab has done a remarkable job imbuing brand hallmarks old and new into this simple two-box form. That's partially because Saab, which long functioned as an engineering nerve center for GM, was responsible for a large percentage of the development of both the 9-4X and the SRX.

The 9-4X's interior is similarly utterly unlike that of the Cadillac. The major bits – the three gauge binnacle with the multi-function display, as well as most of the switchgear, green backlighting, egg crate vents and the optional navigation system – will be familiar to owners of the new 9-5 sedan. Observed fit and finish on our charcoal-cabined prototype was very good, though the 9-4X suffers from the same poor 'Night Panel' switchgear placement (exactly where most people expect to find a start button) and somewhat somber character. Seating is firmer and more supportive than the Caddy, but remains typically Saab comfortable. The range-topping 9-4X Aero comes standard with rather unconvincing carbon fiber effect trim, but we were unable to see the woodgrain trim on lower models – hopefully it's better looking than the unfortunate stuff used in the 9-5.

We're similarly happy to report that the driving experience offered by the 9-4X is totally different from that of its Wreath and Crest factory-mate. We fell in love with the first-generation SRX's rear-wheel-drive, tall wagon dynamics, and came away rather disappointed when the second-generation model nixed its sporting character in favor of middle-of-the-road crossover dynamics. Proving once again that automakers should never build a car for journalists, the new model has been outselling the old SRX by leaps and bounds (what do we know?). Thus, we fully expected the 9-4X to follow suit with competent but uninspiring handling – not much in the fun-to-drive department, in other words.

Thankfully, we were wrong – the 9-4X clearly skews toward the sportier end of the luxury crossover arena, eschewing leather-lined kinschleppers like the Lexus RX and Volvo XC60 in favor of chasing sportier entries like the Audi Q5, Mercedes-Benz GLK, and BMW X3. This focus is telegraphed immediately, from the heavier-than-expected steering feel to the hugely firm, short-travel brake pedal – the latter of which feels like it hails from Stuttgart. We spent a couple of days in a range-topping 9-4X Aero with Saab's XWD system (pronounced "Cross-Wheel Drive") on undulating country roads outside of greater Washington D.C., and we found it to be an agreeable dance partner when the traffic cleared – even when the rain picked up.

Power in the uplevel Aero comes courtesy of the same 2.8-liter twin-scroll turbocharged engine that Cadillac recently discontinued on the SRX due to low consumer interest. Here it produces an even 300 horsepower at 5,500 rpm and 295 pound-feet of torque from 2,000-5,000 rpm – figures that best that of the Q5 3.2-liter (270 hp and 243 lb-ft.) and the GLK350 (265 and 258, respectively). The Aero matches the new X3's horsepower, but falls short by five torques. That power is routed through a standard six-speed automatic, reaching the road through all four of the Aero's attractive turbine-style 20-inch alloys (lesser models make do with 18-inchers). This GM-owned, Saab-developed powertrain puts up good marks, though with over 4,400 pounds to lug around (a good bit more than its competition), the resulting CUV is smooth and quiet, but not exactly a sprinter. The 9-4X's well-behaved Aisin-Warner gearbox is down a cog or two on its smaller and lighter German compatriots, so acceleration is fine but not stirring, reaching 60 mph in 7.7 seconds and pushing on to a top speed of 145 mph.

Non-Aero 9-4X models will make do with a 3.0-liter, normally aspirated V6 offering 265 horsepower (at a sky-high 6,950 rpm) and 223 pound-feet of torque (at a dizzying 5,100 rpm), available in either front- or all-wheel-drive guise. Sadly, only fully optioned 2.8-liter models were on-hand during the launch event, so we'll have to wait to return our verdict on the standard 9-4X. Given that the 2.8-liter feels on the healthy side of adequate, we're guessing the standard model won't make many enthusiasts' shopping lists.

Aero models make further overtures to enthusiasts with their DriveSense variable-effort steering and damping settings. Utilizing the touchscreen, drivers can choose 'Comfort' (default), 'Sport' (quicker throttle response and shift schedule, stiffer dampers and firmer steering), or 'Eco' (tardier throttle responses, quicker upshifts). There are also paddle shifters available for added control and interaction, but unfortunately they don't work in Drive, the gear lever must be bumped over to its +/– detent, a less than ideal arrangement.

Thanks to the 9-4X's stout chassis, our drive time revealed that Trollhättan's tuners have been able to bake-in good ride compliance without sacrificing body control. And while XWD defaults to a safe-as-houses 90/10 front-to-rear power split, the system can reverse those figures, and the electronically supervised torque-vectoring limited-slip differential is unobtrusive in its jockeying of power from side-to-side, allowing for more entertaining handling and turn-in with real conviction.

It all adds up to a surprisingly engaging drive experience – one that suggests a 9-4X high-performance model with another 100 or so horsepower wouldn't be just a hoot, but a handler as well. We do wish, however, that we could individually alter the various parameters in DriveSense, a functionality that Saab officials assure is coming after the short 2011 model year.

On the efficiency front, fuel economy for the 9-4X Aero chimes in at 15 city and 22 mpg highway (base front-wheel-drive models tally 18/25 ratings), which trails class leaders a bit – no doubt due to the Saab's larger footprint and heftier weight, but at least it's possible to haul around more stuff.

Speaking of more stuff – there's no shortage of standard equipment in the top-level Aero trim. Everything from navigation and Bose 5.1 surround sound with XM Satellite Radio to heated and cooled leather seats, park assist and bi-xenon cornering headlamps comes standard, which helps blunt the $48,835 as-delivered starting price – a figure that sounds steep until you start optioning rivals up to comparable levels. Base, front-wheel-drive 9-4X models start at a much more modest $34,205, meaning that no matter how you slice it, the Swedish offering is cheaper than its less dynamic peer from General Motors.

Despite leaping into the heart of one of the market's fastest-growing segments with a good-looking package that's better and cheaper than its gangbusters popular Caddy sibling, we still can't help but be worried for this vehicle's fortunes. In recent months, supplier revolt, work stoppages, on-again and off-again partnerships, indecisive governments, a revolving door of executives, investors of shadowy reputation, a crippled dealer network, a tight advertising budget, subterranean residuals and a general lack of consumer awareness have all conspired in one way or another to keep the 9-4X from coming to market. A cocktail of one or two of these factors would've been enough to kill lesser vehicles – hell, lesser brands – but the plucky Griffin has refused to lie down and expire. And perhaps with good reason. The 9-4X may be late to the party, but it shows that Saab still knows how to make some fine tasting lemonade when seemingly everyone – even a waiter fixated on the buoyancy properties of citrus – is busy handing the company lemons. 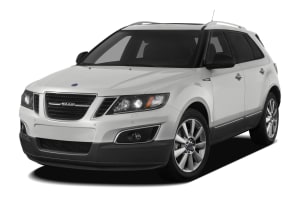