It's not fun to drive, but it looks great, has lots of space and is priced well

Looking at the luxury crossover market, you can probably guess that there’s a clear demand for fastback variants. All the German automakers offer multiple coupe-like crossovers. The rest of the industry hasn't been so sure, including Infiniti, which didn't originally plan to offer a rakish version of its QX50. Yet here is the 2022 Infiniti QX55, and it's the direct result of customer demand. The people wanted it, so Infiniti brought it.

The company didn’t just stop with the low, curvy roofline, though. The front fascia features a wavy, almost sculptural grille, a deeper chin spoiler and crisp black accents around the outboard grilles. The rear gets wider taillights with pronounced LED segments and a diffuser between the tailpipes. The license plate has been moved to the bumper, too, so that you get a big Infiniti badge and proud brand lettering across the hatch. On top of that, every QX55 gets big 20-inch wheels. These detail changes, plus the new roof make this not only a much more attractive-looking iteration of the QX50 but also arguably the best-looking crossover “coupe” in the segment. Infiniti’s flowing design language naturally complements the QX55’s shape, and it looks almost like it was designed to be this way in the first place, whereas competitor’s SUV coupes tend to look like afterthoughts.

Mechanically, the QX55 is nearly identical to its boxier QX50 sibling. The only main distinctions are that the QX55 comes with all-wheel drive as standard, and the new body actually improved chassis rigidity by 10%. The engine is the same turbocharged, variable-compression 2.0-liter four-cylinder from the QX50 making the same 268 horsepower and 280 pound-feet of torque. Fuel economy is also identical at 22 mpg city, 28 mpg highway and 25 mpg combined. 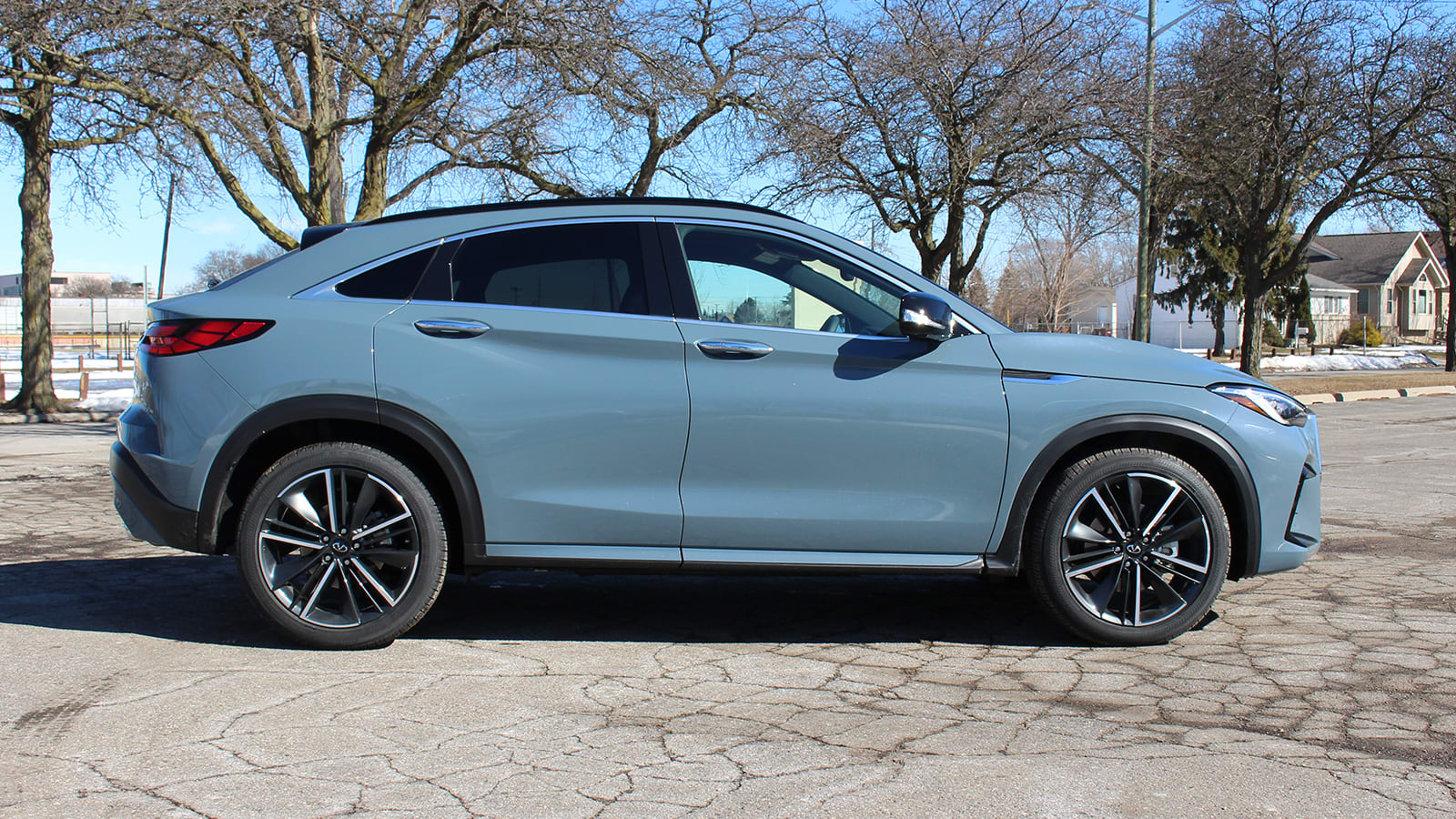 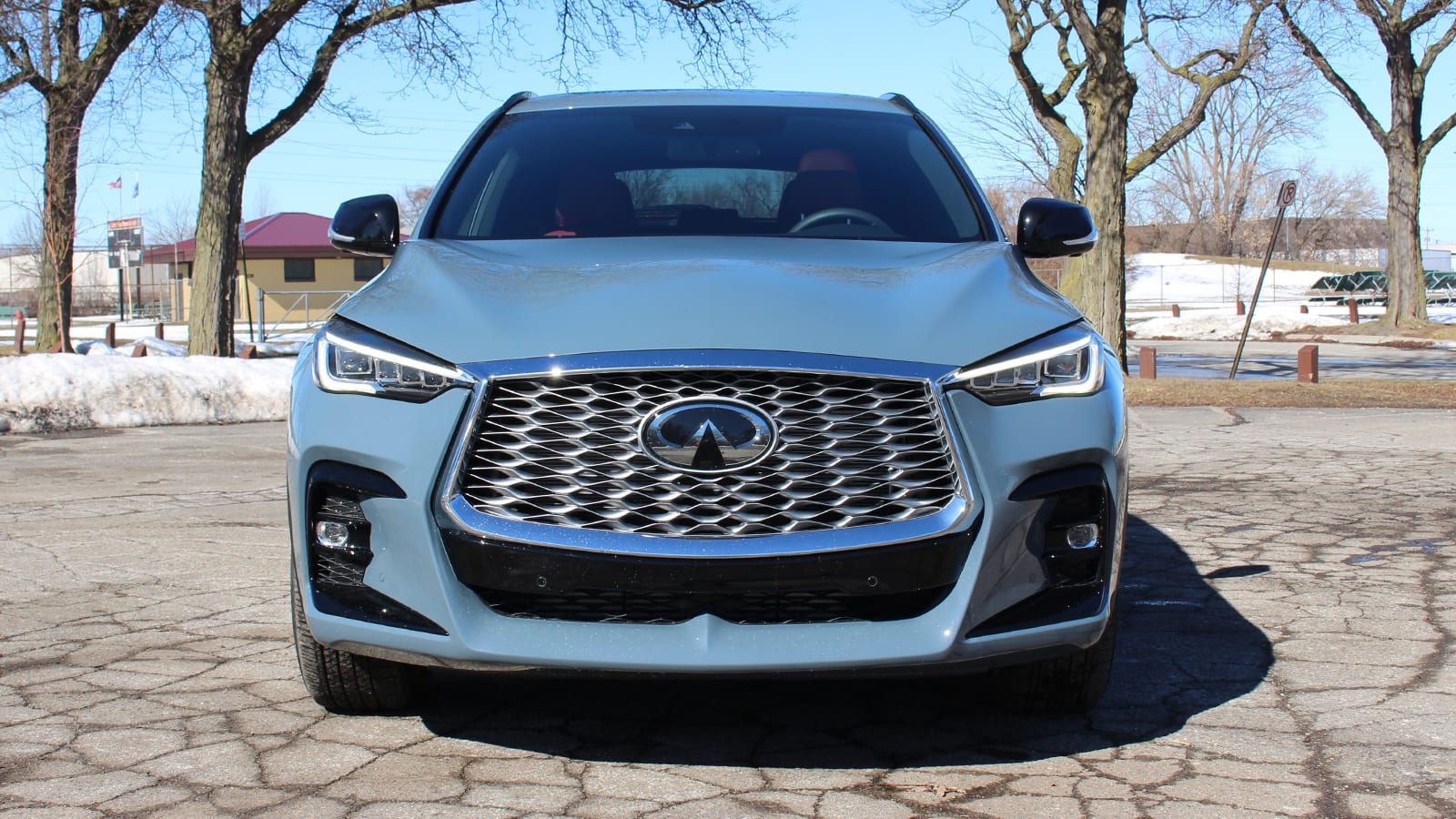 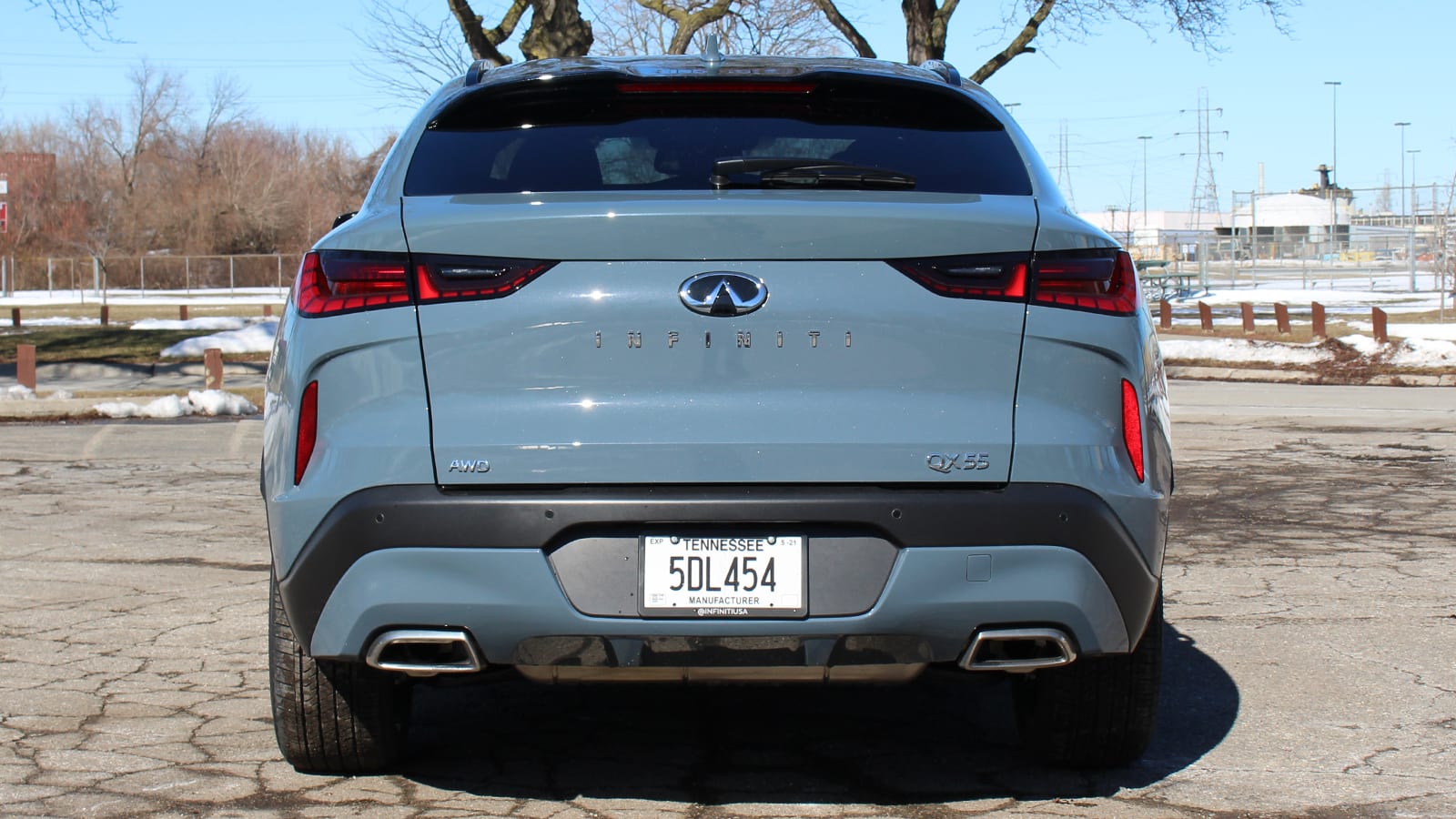 Power goes through a CVT, which again, is basically the same as the QX50’s. It’s not the smoothest engine in the segment, but it’s a responsive and playful one, delivering great low-end torque. The CVT is smooth and reacts quickly to acceleration demands. It has a manual mode that works decently, too, but you never have full manual control. So you might as well let it do things automatically, which is no bad thing.

As for the ride and handling, the QX55, even with its extra rigidity, feels just like the QX50. It has a soft, plush ride and an extremely quiet cabin befitting a luxury car. But when it’s time to corner, it’s deeply disappointing. There’s lots of body roll and understeer. The steering on our test car, the "Direct Adaptive" steer-by-wire system (standard with the Sensory trim, optional on the Essential trim), is light and devoid of all feedback. Thankfully, it doesn’t have the surreal disconnected feeling of past Infiniti steer-by-wire systems, but that's a low bar to clear. The all-wheel-drive system doesn’t really add anything to the driving experience, either. Instead of also mitigating understeer and helping push the QX55 around corners, It’s just there to provide traction at launch and in slippery conditions.

The QX55 interior is a highlight. It’s lifted from the QX50, and that’s good. It’s just as flowy as the exterior, and on our top Sensory trim, it was fitted with sumptuous red and black leather on nearly every surface, plus some dark, natural-finish wood trim across the dash and doors. Lower trim models aren’t quite as flashy but still feature the same attractive design. Only the odd, antiquated dual-screen infotainment lets it down. Most infotainment functions are accessed and operated via the touchscreen at the bottom of the stack. It’s reasonably responsive, though the screen is a little low resolution, and the location isn’t the most easily accessible. The navigation occupies the top slot, and it’s operated by either a touchscreen or with a control wheel on the center console next to the shifter. It’s sluggish and feels outdated to use and look at. On the plus side, it does double as the Apple CarPlay or Android Auto screen, putting those controls in an easy to see and reach position.

The QX55’s high driving position offers great forward visibility, and the front seats have plenty of cushioning. There’s lots of room for front and rear passengers. The rear seats are especially impressive, as your nearly 6-foot tall author could sit behind himself with plenty of knee and headroom. So although the more rakish QX55 has 0.1 fewer inches of headroom up front and 1.5 in the back than the sunroof-equipped QX50, passengers won't really suffer for it. They'll even enjoy more space than the fairly tight accommodations found in many conventional luxury compact crossovers.

While it’s not nearly as engaging to drive as the German competitors, there’s a lot to like about the QX55. You get excellent value and serious practicality all in a gorgeous wrapper. If that’s all you need, the Infiniti needs to be on your shortlist.