It's the all-electric version of the standard GV70 It’s only been a couple of days since a report broke previewing a legion of Genesis EVs to come, but one of our spy shooters has already captured one of those vehicles: the GV70e. Basically, this vehicle is an all-electric version of the GV70 crossover that’s already been revealed.

A number of visual elements give this tester away as the electric GV70. For starters, there’s the solid grille. The heavy camouflage blocks off a grille that is shaped similarly to the normal GV70, but it’s just a big shield in this case. You can see that a tiny slit was cut in the center for what looks like a camera. A criss-cross design is visible in the area immediately surrounding this camera, which is keeping with Genesis’ latest design language. The only difference here is that the crosses are molded into a solid piece, and are not open for air to move through as they would be on the gasoline-engined version.

The only spot in the front end with cooling capabilities appears to be a tiny opening at the bottom of the bumper, which is conveniently placed to be at the same level as a battery pack. Last on the EV checklist is the complete lack of exhaust outlets — the standard GV70 has two exhaust exits in the far corners of the rear bumper. There isn’t even the hint of an exhaust tip anywhere on this tester. Instead, the rear bumper is all one piece, and it’s covered completely by camouflage. 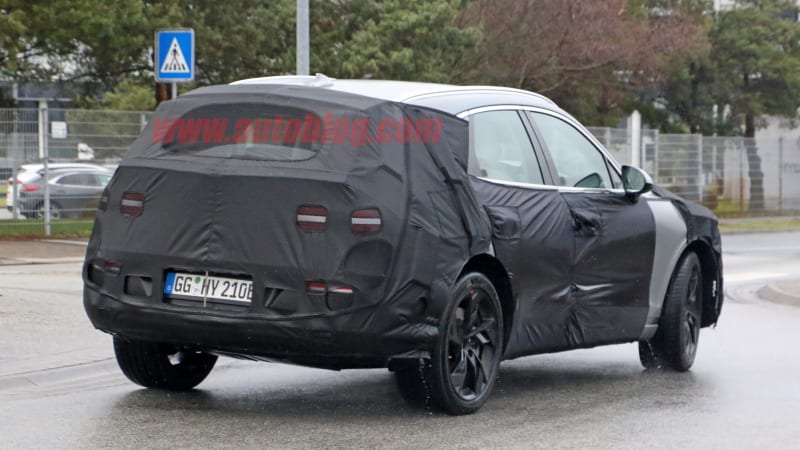 Beyond these electric elements, this GV70e tester looks just like the standard GV70 — the signature Genesis dual-element lights are visible in front and back. There’s a great deal of camouflage still all over the car, though, so Genesis could be cooking up a number of styling details to separate it from the gas engine model.

This EV seems a good fit for the recently-announced E-GMP electric vehicle platform that will underpin a number of electric Hyundai products. The even-smaller electric Genesis crossover we spied the other day (and many others) will also take advantage of the platform. It’s still unclear when the GV70e will debut, but Hyundai has promised to launch 23 electric vehicles by 2025. Considering that Genesis is already on the road testing, this could be one of the earlier ones among the group.