It comes standard with a six-speed stick 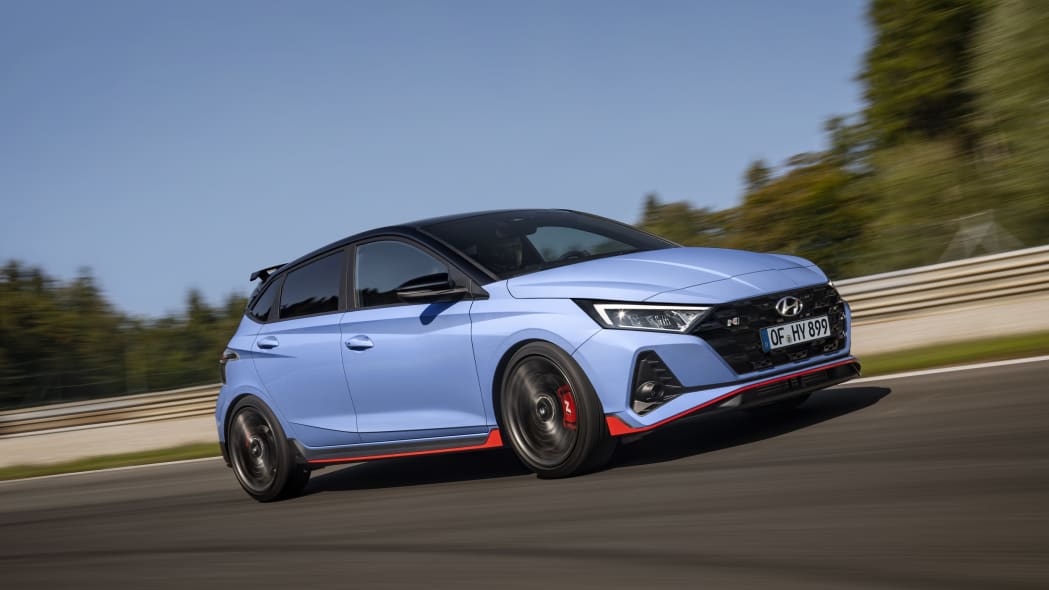 Hyundai added another forbidden fruit to its global range of high-performance N-badged models. It turned the i20, a city-friendly hatchback sold overseas, into an urban rocket aimed directly at the Ford Fiesta ST.

Introduced earlier in 2020, the third-generation i20 competes in a segment that's all but dead in the United States. It's positioned in the same arena as the Ford Fiesta, the Volkswagen Polo, and the Peugeot 208, which are among Europe's best-selling cars. Power for the 2,623-pound N-tuned model comes from a turbocharged, 1.6-liter four-cylinder engine which develops 204 horsepower and 203 pound-feet of torque. It spins the front wheels via a six-speed manual transmission; it doesn't sound like an automatic gearbox will be available.

Hyundai quotes a 6.7-second sprint from zero to 60 mph, and a 143-mph top speed, meaning the i20 N can easily stay wheel-to-wheel with the 200-horsepower Fiesta ST. In the twisties, the pocket-sized hot hatch benefits from the lessons Hyundai learned while developing the Veloster N and the i30 N, and from successfully racing the i20 in the World Rally Championship (WRC). It's notably available with a mechanical limited-slip differential, and it rides on a comprehensively redesigned suspension that's firmer and a little bit lower than stock.

Bigger brakes and a quicker steering system are part of the transformation, too. Hyundai developed the i20 N primarily as a road car, but it stressed the model is more than happy to put in a few laps on the track, too. To that end, drivers have three electronic stability control system settings to choose from: on, sport, and fully off.

Visually, the N builds on the standard i20's sporty design with a specific grille that has checkered flag-like inserts, a roof-mounted spoiler, and an oval exhaust tip integrated into a wide diffuser. Tomato Red accents and 18-inch wheels add a finishing touch to the look. Performance Blue (pictured) is one of the options on the color palette.

The driver faces a three-spoke steering wheel and a digital instrument cluster with a tachometer whose red line varies depending on the oil temperature. Hyundai also added front sport seats with integrated headrests, while the list of extra-cost options includes a 10.25-inch touchscreen for the infotainment system. An available Performance Driving Data System allows users to record, save, and review track-related data.

Hyundai stores across Europe will begin receiving the i20 N in the spring of 2021. Pricing information hasn't been announced yet, but it's of little importance to us because the hot hatch won't be sold in the United States, where the standard i20 isn't available. Product planners haven't forgotten about American enthusiasts, however. We expect to see the Elantra N and the Kona N arrive in showrooms across the nation during the first half of 2021.