Whatever it is, you'll definitely end up parked in a field at some point with some friends

Last week, we took a trip down memory lane to ponder what we would drive in 1985 — you know, if we accidentally got left behind after a crazy old man in a flying DeLorean kidnapped us and left us on a porch somewhere with only a five-year-old hoverboard and a Sports Almanac remaining from our lives in 2020.

Seeing as folks seemed to like that little exercise, we decided to try it again, dropping things back a decade to ask "what would you drive in 1975?" Admittedly, this was going to be a lot harder, as the mid-1970s were not exactly a golden era. More like tin, and inevitably just rust. Nevertheless, in post-Watergate America people still needed to pick a car and so shall we. As before, our only rules were, "It has to be a model year 1975" and in terms of price, "Come on, man, just be realistic."

So, put on your finest oversized collar shirt and join us in a verdant field somewhere as we share what we would drive in 1975. Associate Editor Byron Hurd: I've always been a fan of rotary-powered coupes, and while the FD RX-7 may represent the pinnacle of production Wankel design and performance, the RX-3 (Savanna) was a great-looking car that now holds a ton of nostalgia appeal. I'd drive one of these today, and I definitely would have driven one in '75.

Consumer Editor Jeremy Korzeniewski: I didn't exist in 1975, but, unlike every other member of the Autoblog staff, I do own a vehicle from that year. But as much as I love my 1975 Volkswagen camper van, I wouldn't have bought one brand new. It's a fun playmobile that my family has a great time putting to use, but as a daily driver it's horribly compromised.

So, what to pick? Well, I inherited my automotive tastes from my father, and he bought a brand new orange Pontiac Firebird Esprit with a 350 V8 in 1973 and followed that up with a proper black and gold Trans Am in '77. I'd like to think I'd have made similar choices. My mythical 1975 would be a Trans Am, possibly in black (although the silver one in the image above looks superb, as does the red Firebird Formula with its twin hood scoops), and definitely with the 455 cubic-inch H.O. V8 (a $150 mid-year option) and four-speed manual transmission. 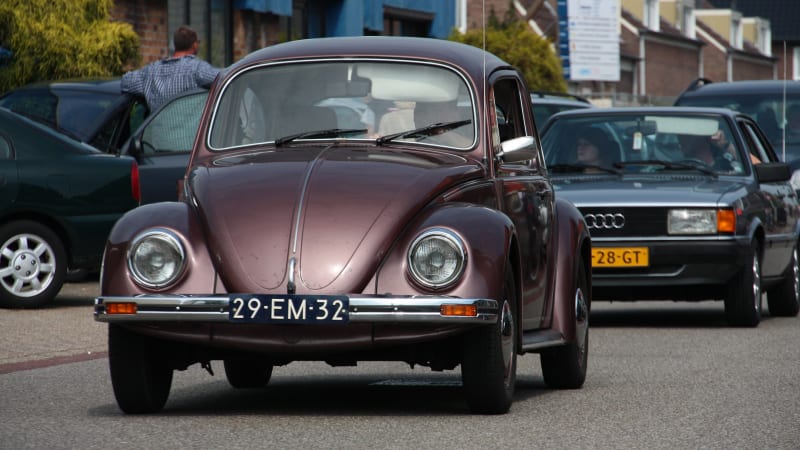 Senior Editor, Green, John Beltz Snyder: Easy: Volkswagen Beetle. Sure, I’m probably going to kiss my legs goodbye if I get in an accident, but this is a car I’ve wanted almost my entire life, and I still plan on owning one at some point anyway. I’ve had a blast puttering around the Oregon coast in my friend’s old Beetle. If I’m buying this new in 1975, I’m keeping it mostly stock, buying that groovy manual and doing my damnedest to keep it running like the Compleat Idiot that I am. Maybe I’ll decide to convert it to electric after driving it for 30 years. One thing’s certain, I’d find so much joy whenever I saw a kid punch their sibling as I drive on by. 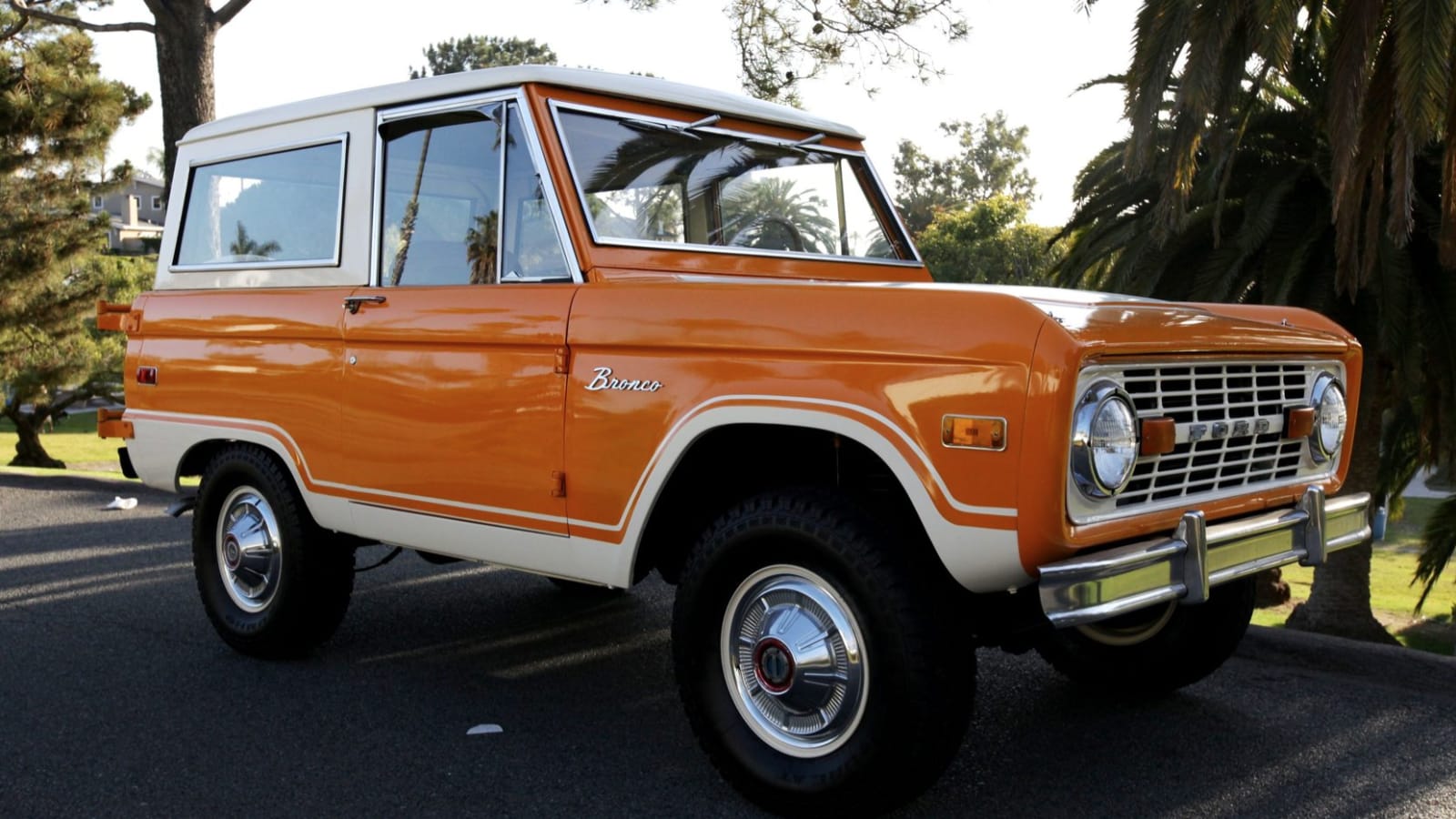 Managing Editor Greg Rasa: I turned 16 in 1975, and though I remember thinking about cars almost constantly, I don't recall thinking about a Ford Bronco much. I didn't know anyone with a Bronco — in those days when you went into the outdoors to hunt or fish, it was usually in a station wagon. My dad was focused on ensuring that my first car was practical, not fast and not cool, and would have called the Bronco, as he later called any SUV, "a truck you can't haul anything in." But today of course we think about the Ford Bronco a lot, as anticipation runs hot for the new Bronco and Bronco Sport.

The starting price was $4,979 in 1975. That's about $24,000 in today's money, and given the current enthusiasm for Broncos, you often see nice examples with an asking price of two or even three times that. So, $4,979, you say? I'll take one in Bold Orange, one in New Lime, and one in Caribbean Turquoise, please. 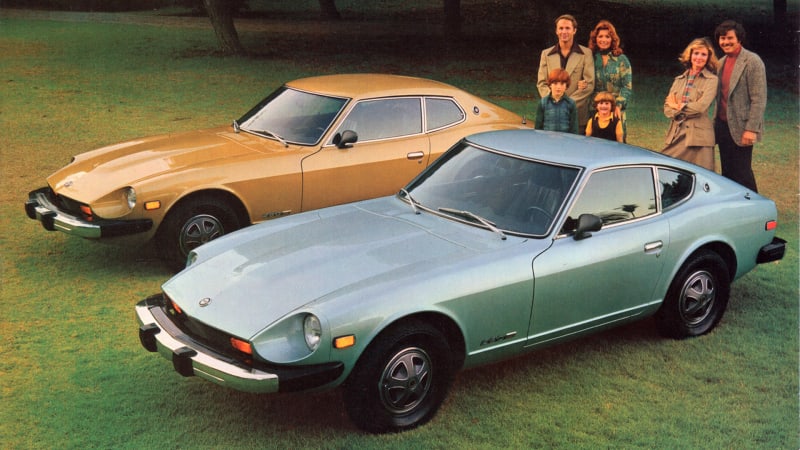 West Coast Editor James Riswick: I was about to pick the Pontiac Firebird, specifically a Trans Am in shockingly classy Stellar Blue, but then Jeremy chose it. Jerk. Instead of being repetitive and also picking a Trans Am, I decided to start pouring over alternatives from 1975. Good grief, what a morass of ugly garbage. Even great nameplates had become the Mustang II or hideous, unmemorable land-bound whales ... and I'm not even opposed to land-bound whales. Just not hideous and/or unmemorable ones. I'd happily, if ironically, pilot a Lincoln Continental, Oldsmobile Toronado or Buick Riviera from just a few years prior. But 1975? Woof. Thankfully, Japan exists, and my search was saved by the Datsun 280Z.

Pronounced 280-Zed as I'm Canadian, it was technically new for 1975, but really just given a higher number to match its new engine's bigger displacement. That fuel-injected 2.8-liter inline-six produced 170 horsepower and 163 pound-feet of torque, which is actually pretty damn shocking for an era in which land-bound whales packed 9.3-liter V8s that could maybe squeeze out 103 horsepower (hyperbole in figures possible). Looking throughout the specs, the Z is basically a spaceship in this era. Actually, it kinda looks like one, too. I would opt for the more practical 2+2 body style, keep the standard four-speed manual and have it painted Racing Green with a beige interior (Dark Purple was tempting). The 280Z is a classic, especially in an era bereft of them. In retrospect, this should've been my pick from the beginning. Sorry about that whole jerk thing Jeremy. 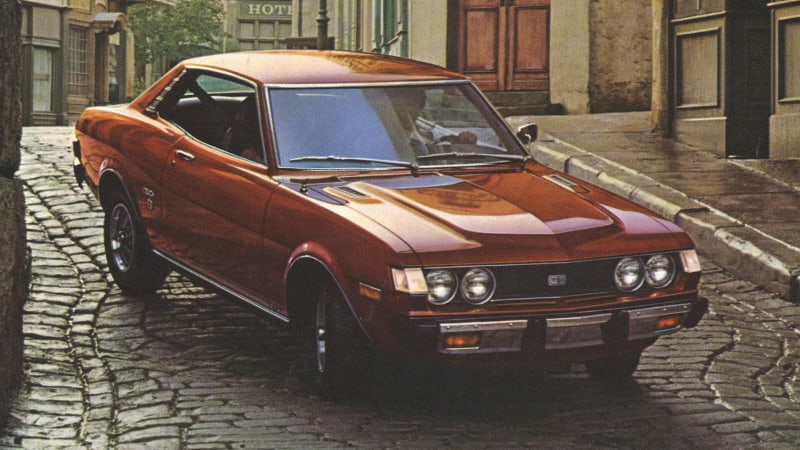 News Editor Joel Stocksdale: Yes, I know, I picked yet another Toyota, but for two decades in a row, that company nails the sporty, affordable (roughly $2,000 less when new than James's flashy Z), reliable car that is right up my alley. This time, it's the 1975 Toyota Celica. It's not the most beautiful version of the car, since it sprouted larger bumpers to meet U.S. safety standards, but it got a bigger 2.2-liter engine that made more torque. Not that there was a lot of power or torque either way at 96 ponies and 120 pound-feet, but hey, all the more reason to get one with every extra bit of performance as possible.

I would definitely go with the GT trim. That added a very modern 5-speed manual transmission that would help make the most of the modest power, and maybe offer a little better fuel economy for the gas crisis era. The outside is spruced up with stylish wheels and a stripe down the side. It also added a leatherette-wrapped steering wheel inside, which would be a nice upgrade over the plastic wood-grained ST trim steering wheel. 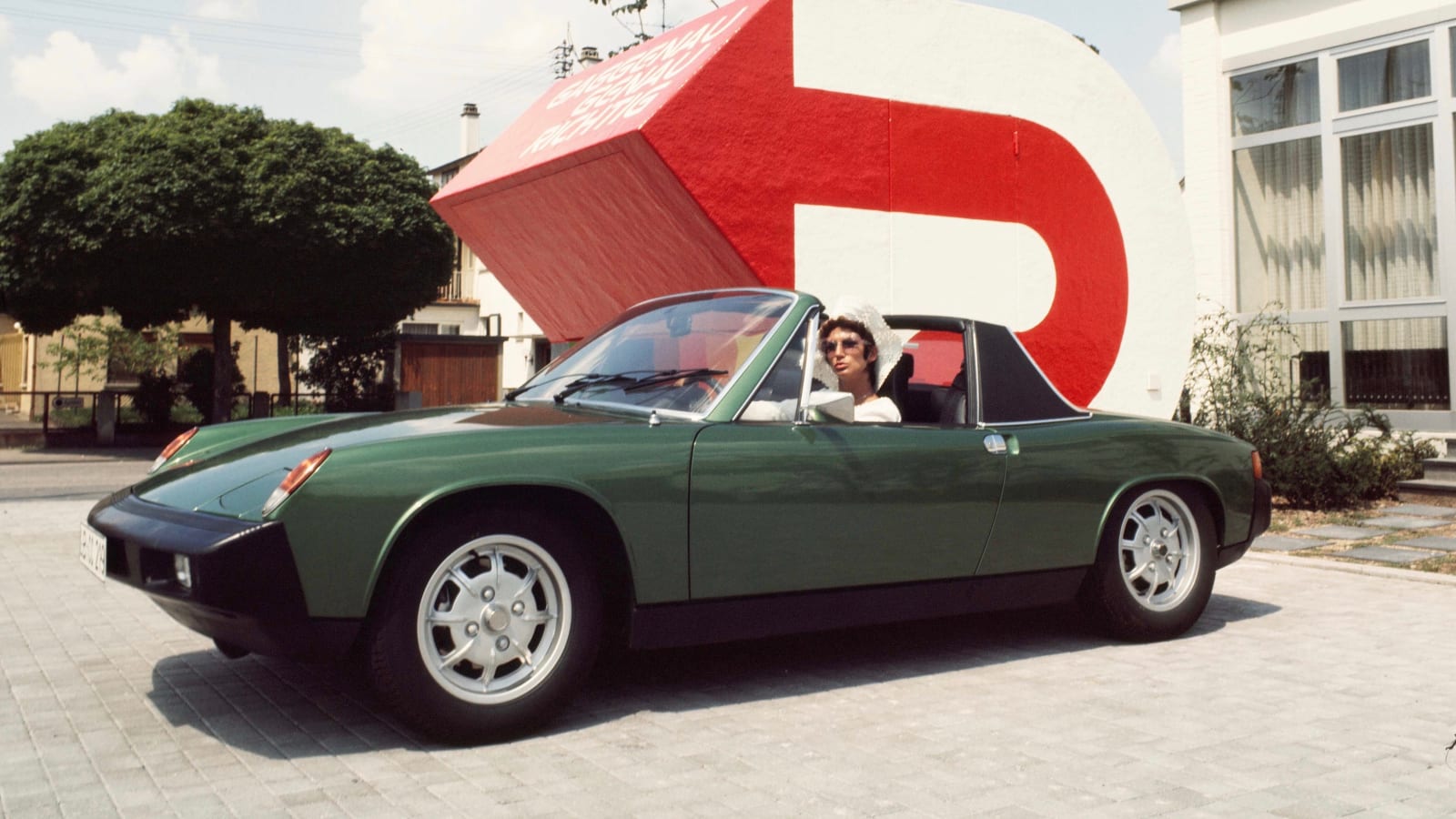 Road Test Editor Zac Palmer: I owned a shell of a 1972 Porsche 914 in high school. The goal was to fully restore it and have that mid-engine Porsche be my first car. That didn’t happen, because I sold it and eventually bought something more suited to Michigan winters. But here’s my chance to rekindle the 914 magic, because Porsche was still making them in 1975. The 914-6 wasn’t an option this year, but the 2.0-liter four-cylinder was, so of course I’d get the bigger engine. To put it lightly, this wasn’t a particularly great era for horsepower, so I’m taking all I can get in a lightweight package.

The 914 I owned was orange, but the green pictured above in an old press photo is just as dashing. We do happen to be in the rubber bumper era, but I’m unbothered. Safety first, right. Affordable mid-engine cars have always held great appeal to me, too. The MR2 has taunted for a long while, and the next vehicle in my garage is most likely going to be a Boxster S from the early 2000s. I could see myself also wanting something Japanese from this era like the 280Z that James picked, but the Porsche allure is too much to resist. Sign me up for the first flight to Stuttgart. 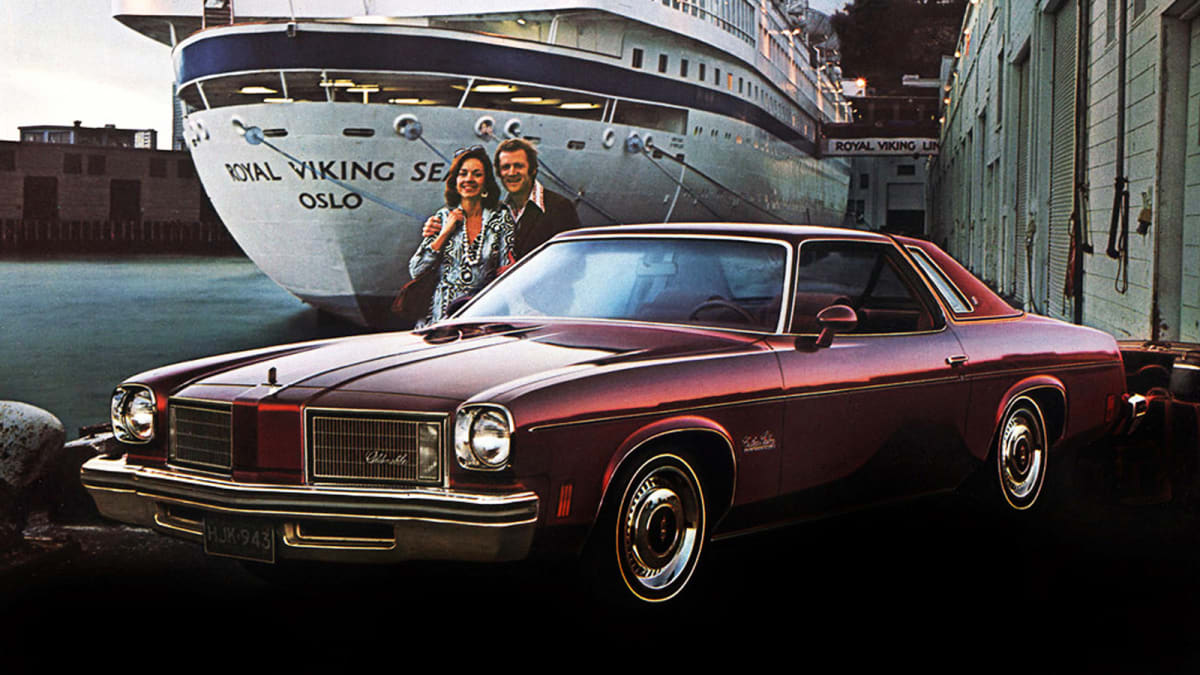 Editor-in-Chief Greg Migliore: This is a random list. And somehow, I’ve chosen two straight Oldsmobiles in this Autoblog series of random lists. That said, 1975. Wow the middle of a forgettable decade that started awesome and ended awful for enthusiasts. Nineteen seventy five feels like the peak of the curve for mediocrity. It used to be better. It was about to get worse.

The 1975 Oldsmobile Cutlass embodies all of that. I actually like the big GM cars from this period, especially the coupes. My parents had a 1973 Chevy Malibu, which is genetically related to the Olds and I’d argue the last 'good' Chevelle. The Colonnade era is underrated, IMO. While ‘73 might have been the last decent year for the Chevy A-bodies, which got worse with progressively uglier lighting shapes, the fourth-generation Cutlass persevered with a look that stood up a little better. One of my uncles had a Cutlass from this era and my dad had a 1970 Cutlass Supreme (third-generation, and generally considered the most iconic), which we’d probably still have had it not been totaled in the late ‘70s. On certain trims you could get swivel bucket seats, and I’d have to take the 455 V8 under the hood. This era of Cutlass also had neat convex design flourishes on the lower parts of the doors and fenders. Considering my hair is starting to look very big and ‘70s as the quarantine rolls on, the Cutlass really suits my mood right now.