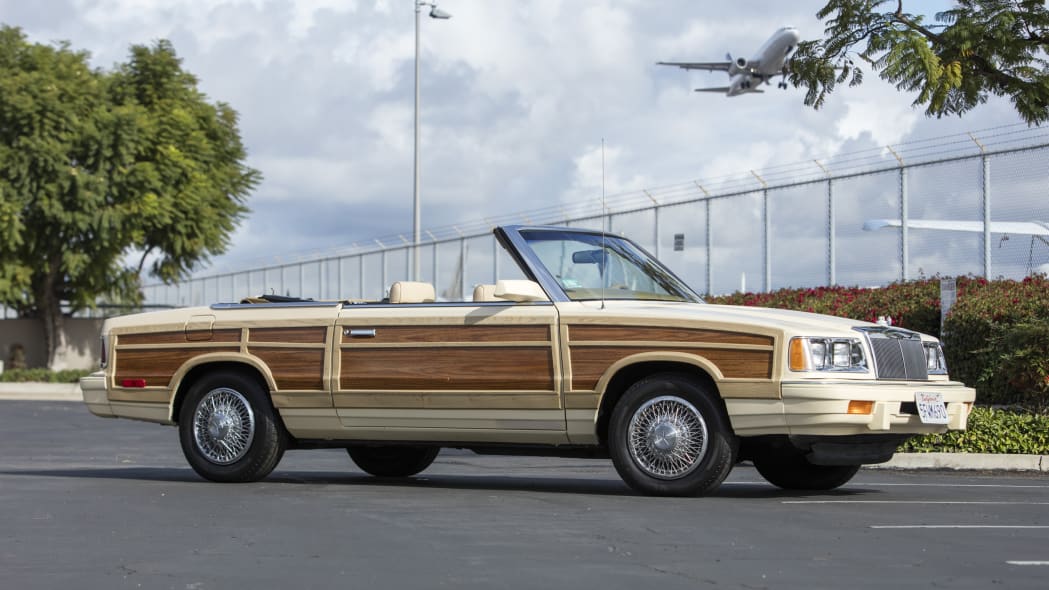 Enthusiasts will have the opportunity to bid on an overlooked piece of Chrysler history during the huge Bonhams auction taking place in Scottsdale, Arizona, on January 16. Offered without reserve, this LeBaron Town & Country Convertible was first registered to former Chrysler boss Lee Iacocca, and it has covered only 20,500 miles since.

The LeBaron Town & Country shares its K platform with numerous Chrysler, Dodge, and Plymouth models built between 1981 and 1989. Nearly every nameplate built on it was mass produced and mass destroyed, but this wood-sided droptop is a rare exception. It's one of 1,105 examples built, and its connection to the man who saved Chrysler (and helped create the original Ford Mustang, the infamous Pinto, and Chrysler's first minivans, among many others) likely helped it reach its 34th birthday in like-new condition, a fate a majority of Ks could only dream of from the wrong side of the Pick-N-Pull fence.

Bonhams stated the Town & Country comes from Iacocca's personal collection. The auction house doesn't mention how long the influential executive owned it for, or how many miles he put on it. What's certain is that Iacocca undoubtedly knew there was nothing exhilarating about the 97-horsepower engine that came standard in the LeBaron, so he paid extra for a turbocharged version of the fuel-injected, 2.2-liter four-cylinder that put 146 horses under his right foot. It spun the front wheels via a three-speed automatic transmission.

Our archives indicate Chrysler charged $17,595 for the Town & Country Convertible in 1986, and priced the turbo four at $628, figures that represent about $42,300 and $1,500, respectively, in 2020. While Chrysler's K-based cars haven't set the collector world on fire yet, Bonhams expects this exceptionally clean example will sell for anywhere between $20,000 and $25,000 when it crosses the auction block in sunny Scottsdale.

To quote Iacocca, "if you can find a better car, buy it." Or, if you're into faster Mopar products, his personal, 6,500-mile Dodge Viper — the very first regular-production example made — will also cross the block in Arizona.