It has been officially revealed in South Korea 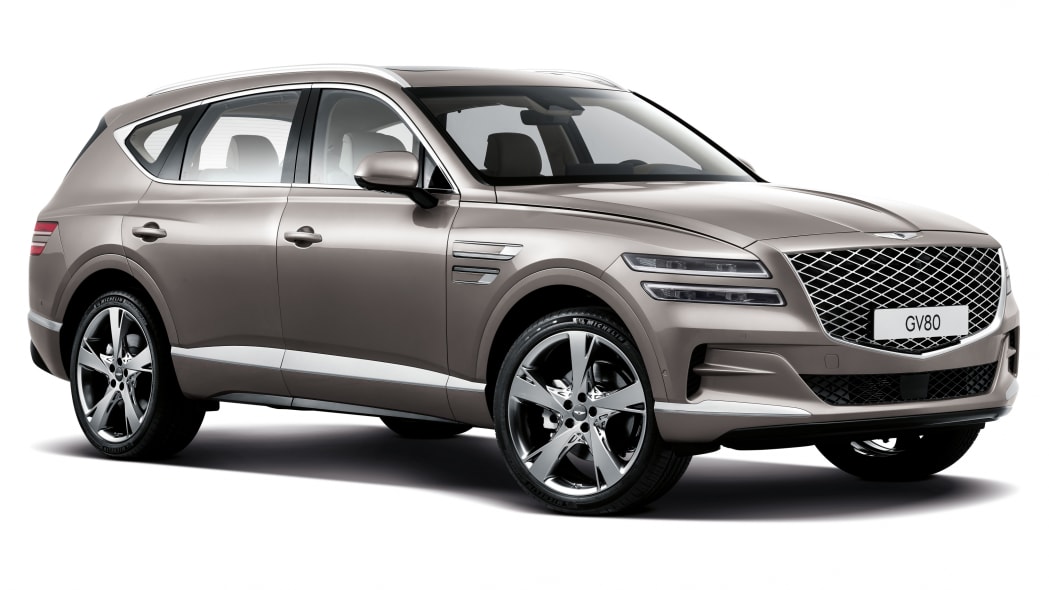 The 2021 Genesis GV80 luxury crossover was given a modest reveal of sorts earlier this month. Now we get a much clearer look at the crossover thanks to its South Korean reveal. It looks pretty much as we expected, with lines based on the original concept. It looks flashy outside and sumptuous inside. Genesis also went to lengths to keep weight down by making the hood, doors and hatch from aluminum.

Besides getting our clearest look at the crossover yet, the company released details about the engines and features. Three engines will be offered globally, and only two are bound for the U.S. The first engine available will be a turbocharged 3.0-liter diesel engine making 274 horsepower and 434 pound-feet of torque. You probably guessed that's not the engine coming here.

The other two engines are a 2.5-liter four-cylinder and a 3.5-liter six-cylinder. We're expecting the 2.5-liter to be similar to the turbo one available in the upcoming Hyundai Sonata N-Line, and will probably be shared with the base Genesis G70, too. Output for it should be at least 290 horsepower and 310 pound-feet of torque. The 3.5-liter engine is more mysterious, as Genesis does not have an engine with that displacement available currently. It could be a higher-displacement version of the twin-turbo 3.3-liter V6 offered on the G70, G80 and G90, as well as the Kia Stinger. The 3.3-liter engine makes 365 horsepower and 376 pound-feet of torque. All engines will be paired with either rear-wheel drive or all-wheel drive, and probably the same 8-speed automatic used in other Genesis models. All-wheel-drive GV80s in the U.S. will get a rear limited-slip differential.

The GV80 also boasts several luxurious bits of technology. The electronically adjustable suspension will have a camera to read the road and automatically change settings for optimal comfort. Navigation will have an augmented reality mode similar to that used by Mercedes in which information will be overlaid on a camera feed to help make clear where to go. The feed is displayed on a massive 14.5-inch infotainment display that also features handwriting recognition for text input. The GV80 has an advanced adaptive cruise control system with steering assist and automated lane change assist. The cruise control also has artificial intelligence that can adjust its driving style to match that of the owner. Active road noise cancellation comes standard, while rear power-adjustable heated and ventilated seats are an option. The GV80 can also be had with three rows of seats.

The diesel Genesis GV80 will be the first to go on sale in South Korea and will start at 65.8 million won. At current exchange rates, that comes to $56,776. Final pricing for the U.S., as well as additional details on trims, power and more will be announced later.