The Genesis G70 is still relatively new, but that doesn’t mean Genesis isn't going to tinker with it. This report from Car and Driver claims that the new 2.5-liter turbocharged four-cylinder going in the Hyundai Sonata N-Line will also be making its way into the G70’s engine bay.

Increased power from the turbo four would make the 3.3-liter, twin-turbo V6 less of an upgrade at 365 hp and 376 lb-ft, unless Genesis squeezes out more power. We wouldn't complain about that.

The news does casts doubt on the future of a manual transmission option. Genesis offers the manual in only one trim of the G70 now, and that’s paired with the 2.0-liter turbo four-cylinder. Take that engine away, and we can only hope that Genesis feels it’s necessary to mate up a manual with the new 2.5-liter turbo. As of now, the Sonata N-Line is the only Hyundai announced to use this engine, and it’s being paired with an eight-speed dual-clutch automatic in that application. Car and Driver says the manual take rate on the G70 so far is only 4 percent, which isn’t a promising statistic.

The most obvious time for this powertrain news would be paired to a mid-cycle refresh of the G70. As it’s still a relatively new car, we don’t expect to see that until 2021 or 2022. We'll let you know if any of this conjecture becomes reality. 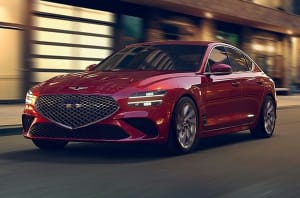 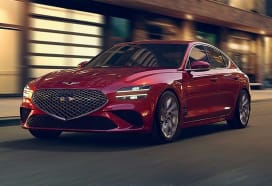