Turbo power brings some N flavor to the Sonata

SCOTTSDALE, Ariz. — With the new 2020 Sonata, Hyundai “wanted to excite people who are looking for a sedan,” says designer Haksoo Ha. That was the impetus behind the car’s aggressively styled exterior, and also the car’s new performance model, the Sonata N-Line.

As Hyundai builds out its N sub-brand, it is following accepted automotive practice by dividing those offerings into two tiers. Full-on N models, like the Veloster N, will be the ultimate expression of the idea, track-capable cars with comprehensive upgrades. N-Line variants will be more mainstream, with changes largely affecting the chassis and the interior. The Elantra GT was the first N-Line, and the 2021 Sonata N-Line will be the second.

Although the production Sonata N-Line has yet to be unveiled, we had a chance to drive a pre-production example. The car was still wearing camouflage, but the lower body kit was clearly visible, and there was nothing hiding the model’s exclusive 19-inch wheels (which are larger than those on any other Sonata) wrapped in 245/40-series rubber – which will be offered in a choice of summer performance tires or all-seasons. 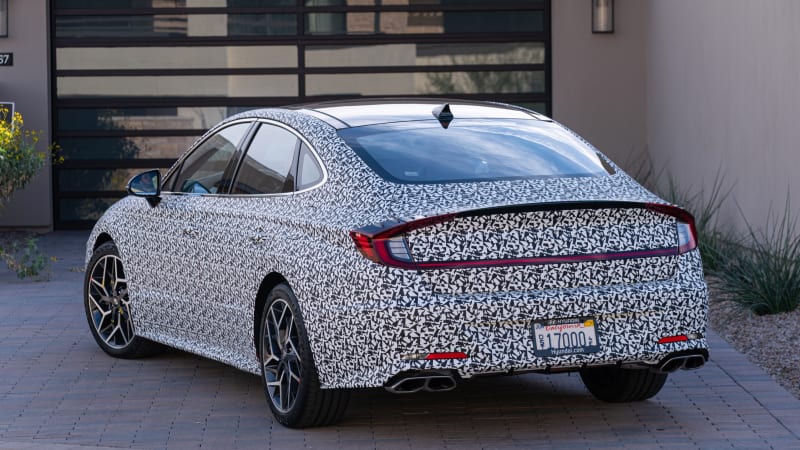 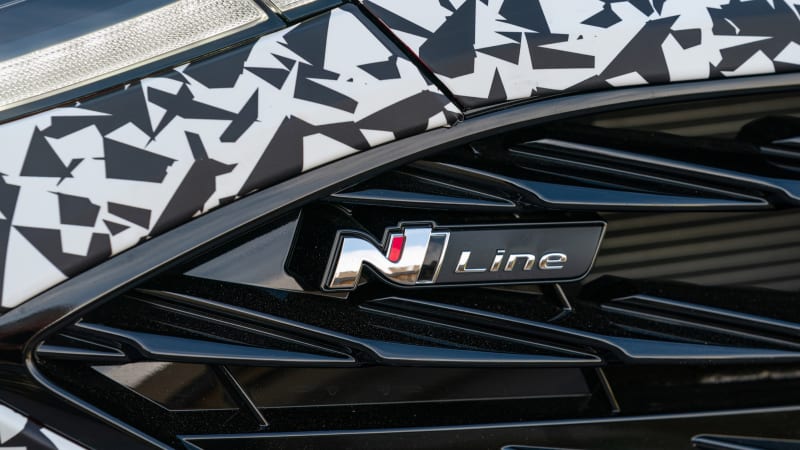 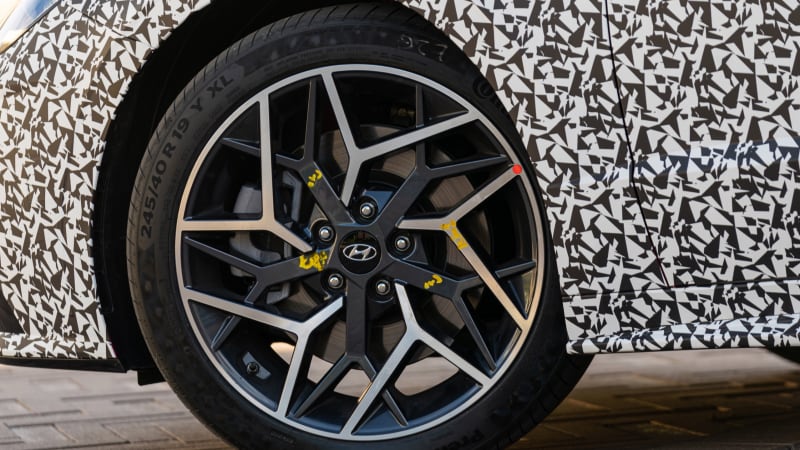 Inside, the big difference in the N-Line is the seats, which have much more pronounced lateral bolsters than the standard chairs, yet are not uncomfortably confining. They’re upholstered in microsuede and leather, and feature red contrast stitching that appears elsewhere in the cabin, which otherwise is little changed.

In the Sonata, the N-Line makeover extends to the powertrain. The engine is a turbocharged and intercooled version of the base car’s 2.5-liter inline-four. A single twin-scroll turbo boosts output from 191 horsepower and 181 lb-ft to an estimated 290 horses and 310 lb-ft (although those numbers are subject to change slightly with the final calibrations). This engine is not an N-Line exclusive, however, and will make its debut in a different Hyundai model before the Sonata N-Line goes on sale next fall. 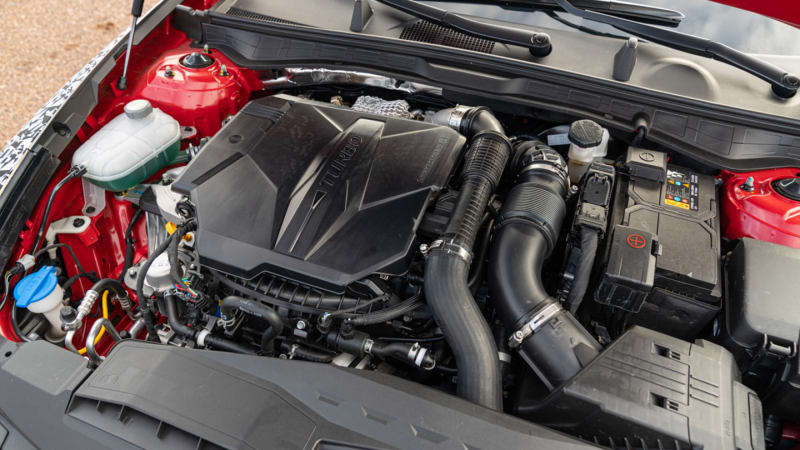 In the Sonata N-Line, the 2.5-liter turbo exhales through dual exhaust outlets, and its subtly sporty tone is apparent immediately upon start-up. The N-Line adds engine-sound enhancement, and the driver can select among standard, quiet, and loud modes. On our drive, the loudest setting was not overly boisterous, but we’re told that it may get more so as development progresses.

The N-Line also gets an exclusive transmission, an eight-speed dual-clutch automatic with shift paddles. Its ratio swaps are impressively quick, and the gearbox has the ability to match revs on downshifts. It was occasionally abrupt moving off from a stop, a common issue with dual-clutch units, although again, we’re told Hyundai is working on smoothing it out.

Stomp on the gas, and the N-Line scrambles for traction but torque steer is under control. (A launch mode also is planned, but this early car didn’t have it.) The N-Line feels notably stronger than the regular Sonata’s 1.6-liter turbo, which itself is no slouch. The engine makes its peak torque from 1,650 to 4,000 rpm, and on the fast sweepers of US-87 northeast of Phoenix, it was fun to lean into the throttle and feel a wave of turbo-spooled torque push us ahead accompanied by a faint whistle. 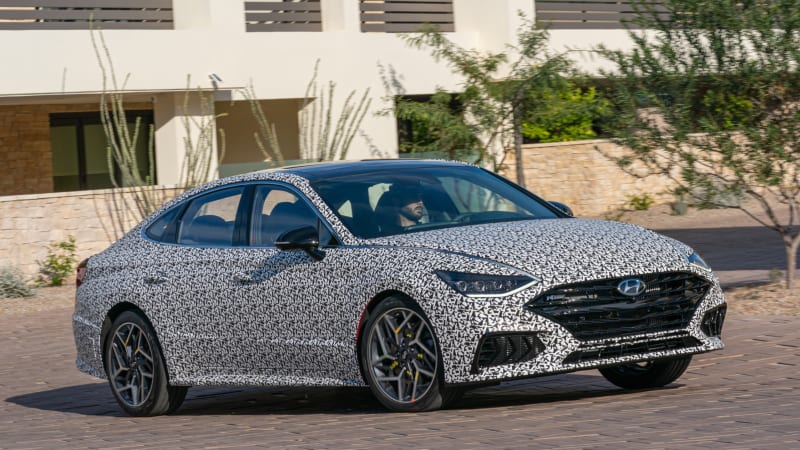 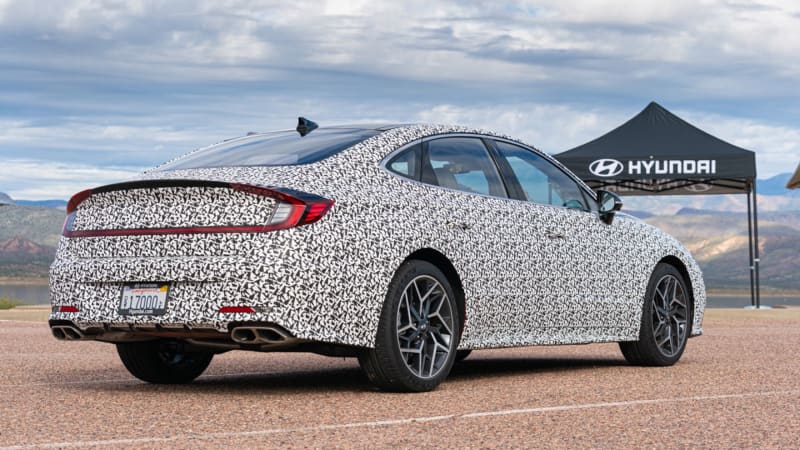 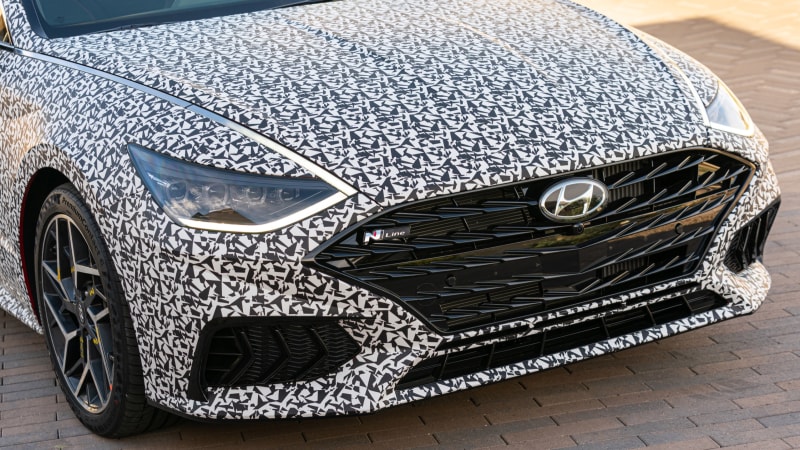 Chassis changes feature prominently in the N-Line, which gets its own springs, dampers, and bushings, as well as more robust brakes. The N-Line also adds a Sport+ setting to the Sonata’s standard drive modes, which alters steering effort, throttle calibration, and transmission shift mapping. Sport+ additionally will affect the stability control system, although Hyundai is currently deciding whether that mode will switch it off completely or just put it into a more lenient program.

The N-Line’s steering has more heft than the standard Sonata’s and is confidence-inspiring without being overly heavy. The suspension tuning is not finalized, but in its current state, the N-Line definitely resists body roll more so than the standard car, and body control is firm. But so is the ride, and Arizona’s relatively minor pavement surface imperfections were dutifully reported.

It will be interesting to see where the Sonata N-Line ends up in its final fettle, and how it looks with the camo stripped away. The car we drove appeared to be outfitted with as much kit as the Limited, which suggests the N-Line could be the most expensive trim level when it joins the lineup. That would mean a price approaching $35,000 – although Hyundai isn’t talking about price or positioning yet. We can say that the N-Line is sure to add an intriguing dose of spunk to Hyundai’s shapely new Sonata, and should further spice up a segment that includes the 2020 Toyota Camry TRD, too. That’s good news for us: fast and fun is exactly how we like our sedans.

$1,238 - $2,219 Nat'l avg. savings off MSRP
See Local Pricing
I'm not in the market for a vehicle at this time. Please move this suggestion to the side for 30 days.
Huge Savings