It's more SUV-like than the outgoing model Mercedes-Benz published a design sketch on its social media channels to preview the second-generation GLA crossover. The model is scheduled to make its debut online on December 11.

The sketch picks up where the last batch of teaser images left off. Don't pay attention to the huge wheels; they're not headed to production. The rest looks fairly accurate. The next GLA is taller and more SUV-like than the outgoing model, it's about half an inch shorter, and it looks like it's better proportioned. While we haven't seen the front end yet, earlier spy shots suggest it wears a sharper design. It falls in line with the design language seen recently on the firm's other compacts.

The similarities continue inside. In a separate post, Mercedes released an image that shows part of the model's cockpit. The air vents, the digital instrument cluster, and the steering wheel are the same units you'll find inside the firm's other compacts. The MBUX infotainment system will be offered, too. The GLA shares more than styling cues and interior parts with the second-generation CLA, the first A-Class sedan, the seven-seater GLB, and the minivan-esque B-Class sold in Europe. All of these models ride on a front-wheel drive architecture that can be upgraded with 4Matic all-wheel drive. Like most of its siblings, the GLA will get a turbocharged, 2.0-liter four-cylinder as its entry-level engine. Mercedes will add more powerful turbo fours (including a 416-horsepower unit that will power the flagship GLA 45), and a plug-in hybrid model could join the range a few years into the production run.

The next GLA will break cover on the Mercedes Me media platform the firm launched in 2017 at 2 p.m. CET on Dec. 11, which is 8 a.m. in New York and 5 a.m. in Los Angeles. It will be the first time Mercedes introduces a car exclusively online. There won't be an unveiling event organized for the media, and executives purposely chose to step well out of the auto show circuit. It's a move that saves a significant amount of money while drawing attention to the Mercedes Me platform. 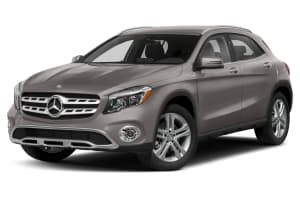