The force is strong with the Mercedes crossover game right now. New, tall vehicles of all sizes seem to be sprouting up constantly with the three-pointed star, including the new GLE, GLS and GLB that we've seen in a rather short timespan. These spy photos give us our best look at the smallest of the bunch: The 2021 Mercedes GLA.

We saw one grainy picture of the jacked-up hatchback a few weeks back. That one looked more like a Mars rover than a suburban rover, with missing rear doors and four blue antenna-like rods rising out of the roof. This batch of spy photos shows us a much more complete prototype vehicle, giving us a better sense of what to expect come launch time.

Though it's going to be built on Mercedes' new front-drive architecture we saw in the new A-Class and CLA, the vehicle's general shape is staying the same as before. There's nothing too rugged or tough about the design we see here — that squared-off body is reserved for the larger GLB. But what were we missing out on before sans rear doors? The camouflage makes it appear as though there's a bulge that starts in the door, leading into the muscular fenders. This body line appears more pronounced and obvious than the current GLAs roaming the world.

Both the headlights and taillights look like they're production-ready units. Those taillights may be mostly covered up, but the light signatures poking through look identical to the LEDs on the rear of the just-revealed GLB crossover. We think they look good there, so the rear of the GLA should benefit, as well. There's a lot of area that's totally covered up in the C-pillar and hatch area that we can only guess at for the time being.

Our spy photographer found this tester driving by Mercedes properties in Stuttgart, Germany. As we mentioned in our first GLA spy shot post, this mini crossover will probably be equipped with a 2.0-liter turbocharged four-cylinder engine. Current estimates place it as a 2021 model year vehicle. 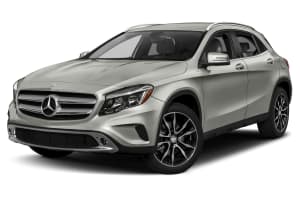