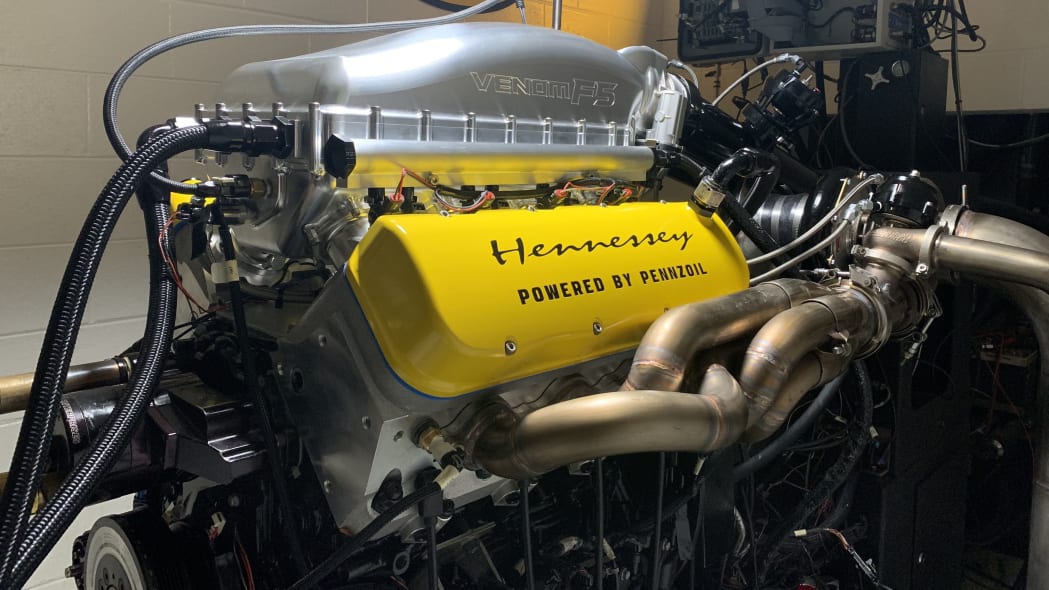 Details on the Hennessey Venom F5 hypercar have been trickling out of the Texas-based company, and they seem to change every time we hear about it. But hopefully things are becoming more concrete, because Hennessey revealed it has finally dyno-tested the engine slated for the car and have final numbers.

It makes 1,817 horsepower at a screaming 8,000 rpm and 1,193 pound-feet of torque at 5,500 rpm. It also apparently will make at least 1,000 pound-feet of torque from 2,000 to 8,000 rpm. Redline is 8,200 rpm. It's worth noting that these numbers put the Venom over 200 horsepower ahead of the Bugatti Chiron Super Sport 300+, Koenigsegg Jesko, and Hennessey's original power goal. The engine revs 1,000 rpm higher than the original prototype, too. This is all good news considering Hennessey wants to break the 300 mph barrier like Bugatti has and Koenigsegg aims to do.

Just as the Venom F5's power isn't what was previously announced, the engine itself has changed since we last saw it. When it was shown at The Quail last year, it was all-aluminum and had a displacement of 7.6 liters. Displacement has dropped down to 6.6 liters, and the engine block changed from aluminum to forged steel. But as with the prototype, it's twin-turbocharged, uses pushrods instead of overhead cams, and the heads, intake manifold and pistons are all still aluminum. The engine has a name, now, too: Fury.

Hennessey also announced it will begin testing the whole car later this year. The company will build 24 examples total, each with a price of about $1.6 million. Provided that all goes well with the regular Venom F5, the company has plans for a roadster variant to come afterward.