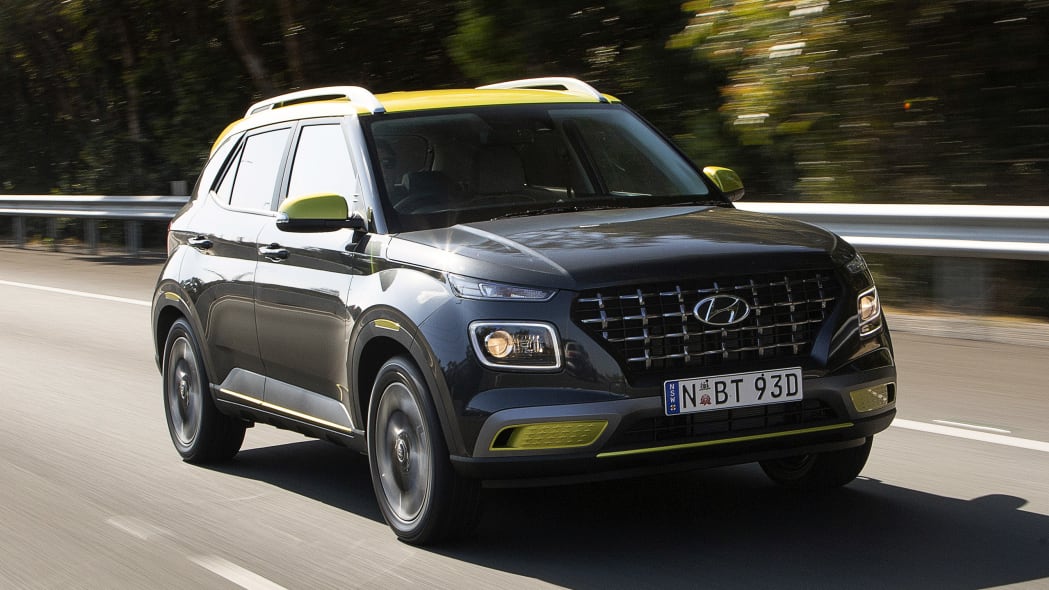 Hyundai's smallest crossover charms with cute looks and great tech. However, a choppy ride, lackluster powertrain and small interior hold it back.

SUNSHINE COAST, Australia — When your country is the size of the continental United States, but is home to fewer people than Texas, you’re going to have lots of wide-open spaces. That’s why Australia is the perfect place to wind out your McLaren Senna or go pounding in a giant off-roader like a Mercedes G-Wagen 6x6. Maybe next time. We’re here to drive the new 2020 Hyundai Venue, the automaker's smallest and least powerful SUV ever.

Yes, smaller than the company’s own petite Kona. With a 99.2-inch wheelbase and 159 inches of overall length, the Venue is about the size of a Nissan Juke or a Ford EcoSport – making it 5 inches shorter overall on a 3-inch shorter wheelbase than the Kona. It’s smaller than a bunch of other subcompact crossovers including the Kia Soul, Nissan Kicks and Mazda CX-3.

Yet the Venue has almost the same amount of front and rear legroom as the Kona, and is only 2.2 cubic feet shy of its overall passenger volume. Its 18.7 cubes of cargo space are just a half-cube behind the Kona, too. It’s only with the rear seat folded that the Venue falls way behind, its 31.9 cubic feet unable to compare to the Kona’s 45.8.

“To find the extra interior space, we pulled all the strings we could,” says Saikiran T. Nuli, Hyundai’s product planning manager on the project. “For example, we made the Venue’s dashboard shorter than the Kona’s, then we took that space and put it in the backseat.”

Slide behind the wheel and the Venue feels a bit narrow, but it doesn’t feel cramped. There’s plenty of glass, and its pillars aren’t overly thick, so the view out feels unobstructed. Hyundai hasn’t botched an interior in years, and its hitting streak continues with the Venue. The layout is clean and the controls are simple, featuring a standard 8-inch touchscreen that is one of the largest in the class. It looks a little tacked on, but it’s well placed. The wheel can be wrapped in leather, and the Venue’s seats are firm and comfy. Its backseat doesn’t force you to sit bolt upright. The only interior gaffe is the hard armrests on the door panels, which can beat up your elbows after a couple of hours. 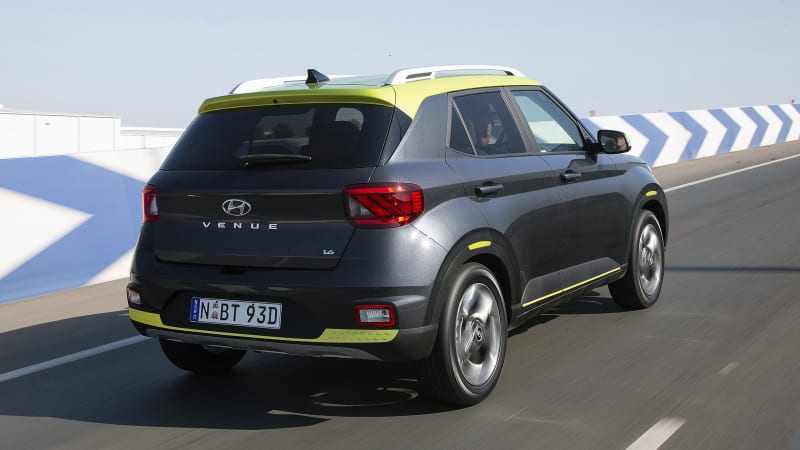 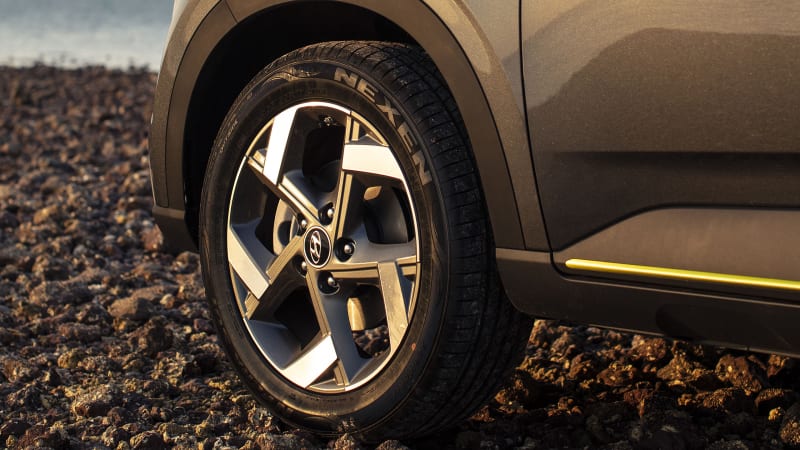 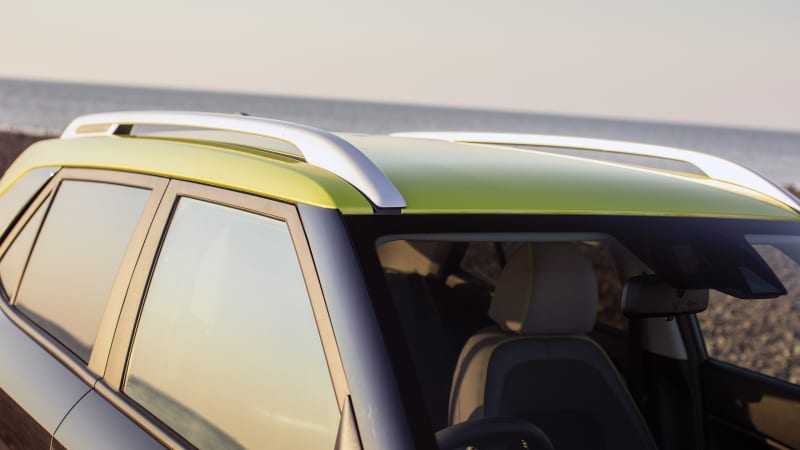 It’s also quite attractive in the flesh. With the Venue’s pronounced wheel wells and hard character lines, it’s sort of a cross between the sporty Kona and the more sophisticated Palisade. The grille is similar in shape to the Palisade's, recessed at the bottom for more dimension. It’s also mostly blocked off to increase aero. The headlamps, LEDs on the SEL, are down low in the bumper, and have been separated from the turn signals, which remain higher.

“The Kona embodies sportiness, while the Venue’s design is a balance of practicality and personality,” says Jang Jae Bong, head of Hyundai’s Exterior Design Group. “Its dimensions are very tight, but there’s visually more angles so it always looks like it’s moving.”

Pinching the bottom of its door emphasizes the Venue’s stance and adds musculature. In the rear, its C-pillar appears more radically raked than it really is. It’s a crafty bit of design that keeps the backlight upright to increase cargo space, but avoids being boxy. The affect is emphasized with a white roof, which is only offered as part of the loaded Denim trim level along with special blue upholstery. If there’s a downside to the Denim trim, it’s that a sunroof isn’t available due to some manufacturing complexities with its white roof.  It all works, including the shapely tailgate and the bold, symmetrical badging. If there’s a criticism to be leveled, the design of its 17-inch alloys are a bit overbaked. 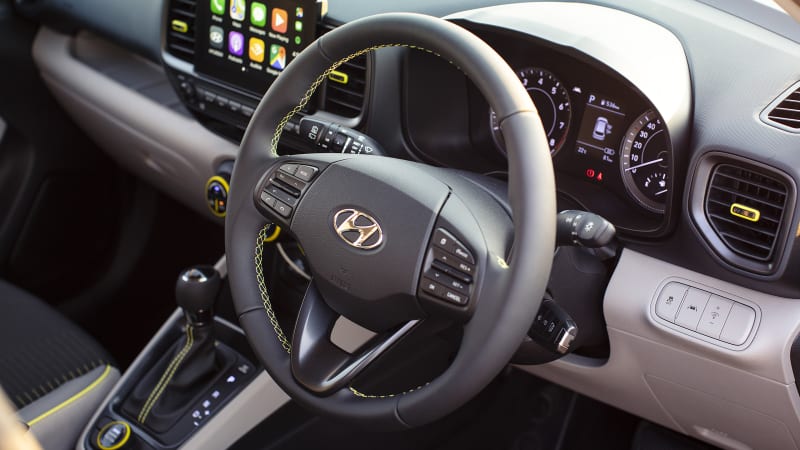 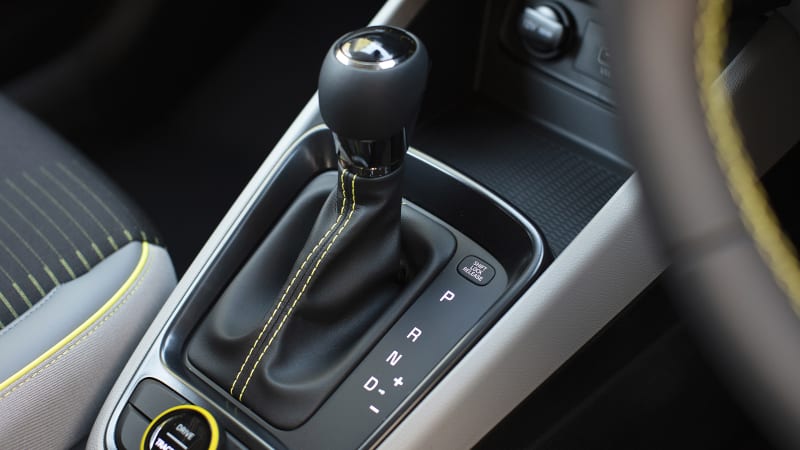 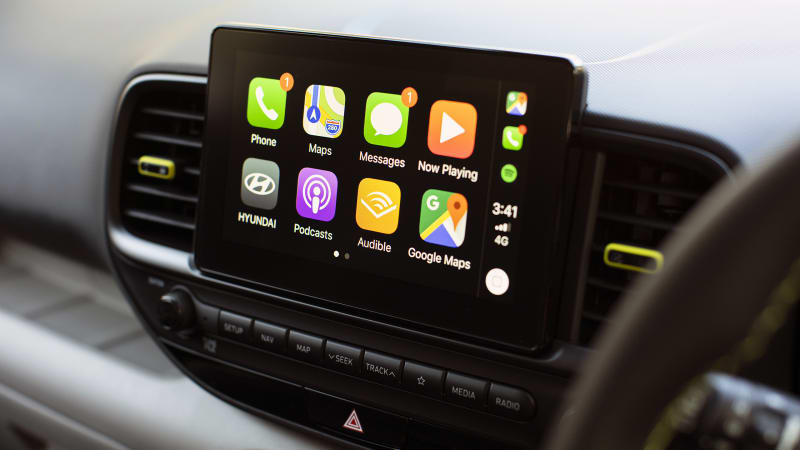 Built in Ulsan, Korea, the Venue is on the small variant of Hyundai’s K2 platform, along with the Accent with which it shares its naturally-aspirated 1.6-liter four-cylinder. Rated at 121 horsepower at 6,300 rpm and 113 pound-feet of torque at 4,500 rpm, it’s a bit light for a class that pushes 140 hp normally, but is on par with the Nissan Kicks and the 1.0-liter EcoSport.

Unlike the Kona, all-wheel drive is not available on the Venue. There is a choice of transmission, however. The S, surprisingly, is available with a six-speed manual transmission. Most buyers will choose Hyundai’s new CVT automatic, which it calls its Intelligent Variable Transmission or IVT. It’s the same CVT used in the Accent, and it was developed in house by the same team that engineered the eight-speed automatic used in the Kia Stinger and Genesis G70. It feels more like a traditional automatic, with six simulated gear “steps” that can be selected with the shifter’s manual gate. There aren't any paddle shifters. Throttle response and the transmission's behavior are adjustable with Normal, Eco and Sport settings. You can feel the difference, especially in Sport mode, which quickens the throttle response and keeps the transmission in lower gears longer.

The all-aluminum, DOHC engine is a bit raspy over 4,000 rpm, but happily revs to 6,500 rpm and moves the CUV with enough zest to be entertaining to buyers in this class. Hopefully the Venue feels as quick with the IVT transmission, which Hyundai says improves fuel economy. Official fuel economy numbers aren’t available yet, but we’re told the U.S-spec model should deliver a combined rating of 32 mpg, which is 1 mpg lower than a Kicks but 4 mpg better than the 1.0-liter Ford EcoSport and 2 mpg better than the base front-wheel-drive Kona. 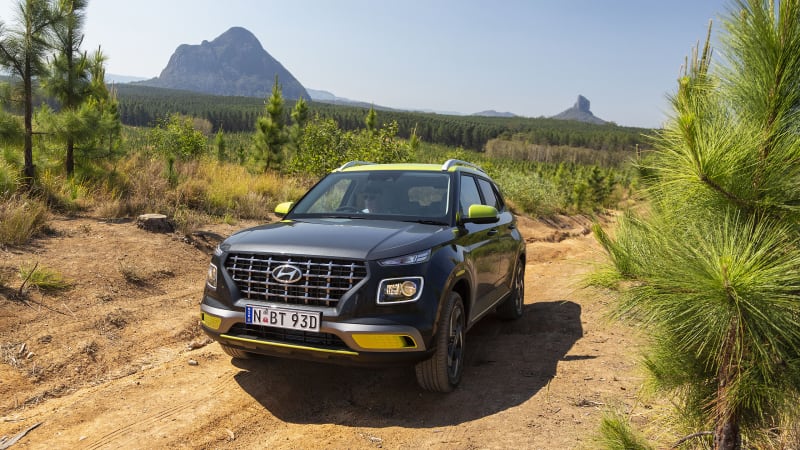 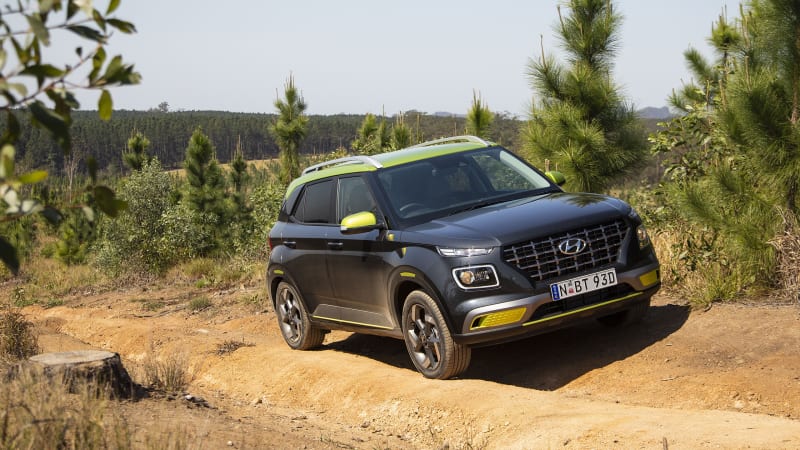 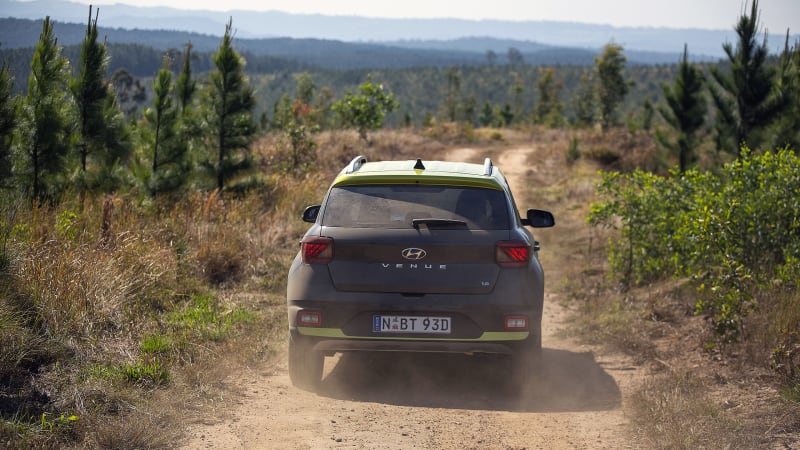 The cars we’re driving are Australian spec, and there are a few differences, including stiffer dampers than Americans will get, summer tires instead of our all-seasons, and a six-speed automatic instead of the CVT. On the twisting and undulating two lanes about two hours north of Brisbane on the country’s east coast, the Venue likes to be tossed around. There’s little body roll and its steering isn’t overboosted. Both S and SEL trims ride on 15-inch wheels, however, our Denim test vehicle is equipped with 17s, and there’s enough grip to impress. The larger setup will also be optional on the SEL.

The lightest Venue is a mere 2,557 pounds, and even fully optioned it’s just 2,732 pounds, so it doesn’t need a ton of tire to keep our desired pace. It understeers at the limit, but that’s to be expected considering its 60% front weight bias and torsion beam rear axle. While the S is equipped with rear drums, the SEL and Denim also get four-wheel disc brakes. Although the pedal is a bit softer than ideal, the brakes are easy to modulate and have plenty of bite.

Push the little Venue around harder than it likes and its traction and stability control systems take swift action, but they aren’t heavy-handed. The system features a brake-based torque vectoring system for a little extra confidence in corners. Although you can feel it working, keeping the Venue on the desired line, it doesn’t feel like it’s doing the driving for you. The system is controlled with a large knob behind the shifter. There are Normal and Snow modes. 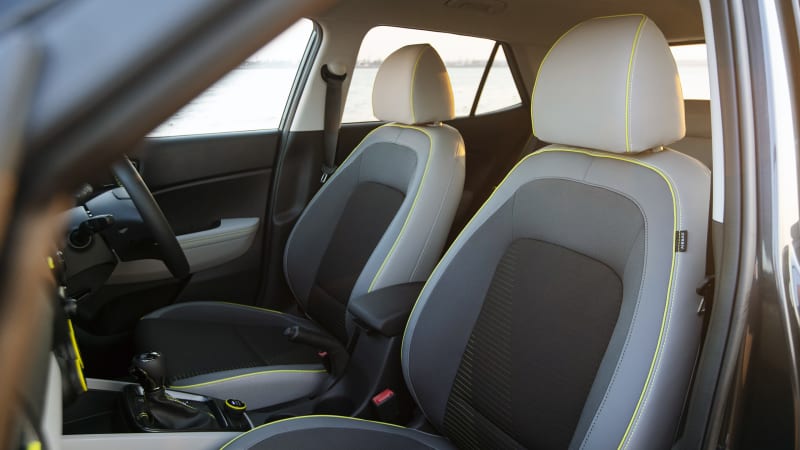 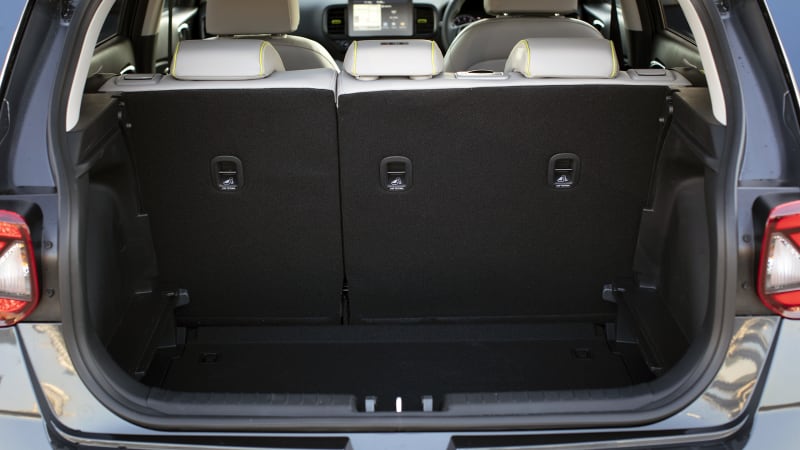 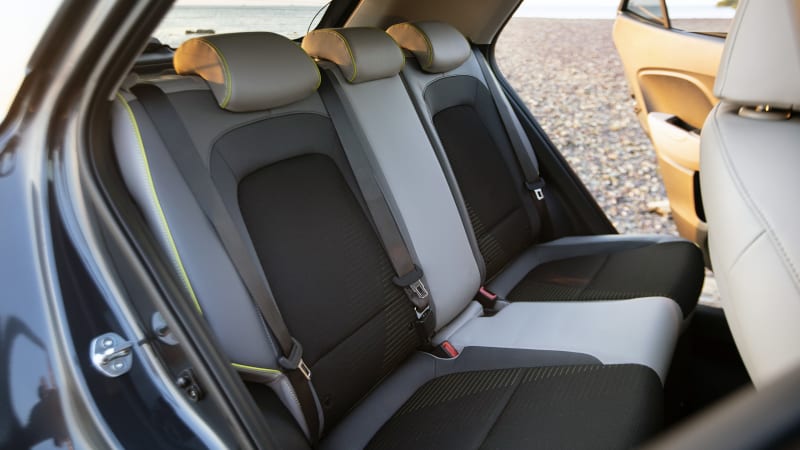 The little Venue uses a MacPherson setup up front and a less-sophisticated but cost-effective torsion beam setup in the rear. With the firmer Aussie-spec shocks, the ride is tight but quite agreeable, even at 60 mph on Australia’s many gravel roads. Large impacts are soaked up well and the cabin isolation may be the best in this class. There’s 6.7-inches of ground clearance, the same as you get in a Kona. The crossover also feels substantial on the road. It doesn’t feel like it’s going to get blown around by a passing truck or a stiff crosswind. And it doesn’t feel tinny. Its doors close with a solid thud.

Pricing hasn’t been set yet, but the Venue should start well under $20,000. Every Venue gets forward collision warning with automatic emergency braking and pedestrian detection, lane-keeping assist, and a driver inattention warning system. Blind-spot and rear cross-traffic warning are optional on the SEL and standard on the Denim.

Dealers should be getting their first batch of Venues in December, bringing Hyundai's crossover count to six, and its fourth all-new crossover launched in the past two years (if you count the fuel-cell-powered Nexo). An all-new Sonata is also about to hit, but Hyundai already sells more SUVs than cars, and it says the Venue is an entry-level model intended for recent college grads. Its competitors, according to Hyundai, also include used cars. 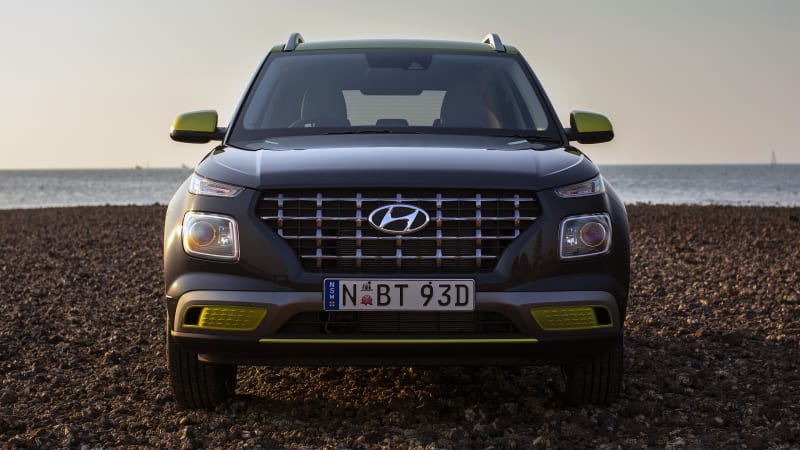 Its timing seems right for success. Kona sales have basically doubled in 2019, putting Hyundai on pace to sell about 100,000. Last year Ford sold nearly 55,000 EcoSports, and its sales are also up sharply in 2019. After our brief drive Down Under, we prefer the Hyundai over the Ford, but without pricing we’ll wait to place judgment on the Venue’s value proposition over a Kona or its many other competitors.

Now, does anyone know where we can rent a G-Wagon 6x6?