2020 Land Rover Defender vs. 2020 Jeep Wrangler: How they compare on paper

For ages, the Jeep Wrangler has had the serious off-road SUV market in America all to itself, especially when it comes to two-door variants. But competition is coming, and the first on its way is the 2020 Land Rover Defender, which was just revealed at the Frankfurt Motor Show. Each packages retro looks and impressive off-road capability, but does one have an advantage? We decided to take a look into each SUV's specifications and compare them on their engines, drivetrains, interior space and towing among other things, to see how they stack up. Since both SUVs are offered in two-door and four-door versions, we've made sure to feature both versions. You can find all the vital stats in the chart below, followed by more in-depth analysis. 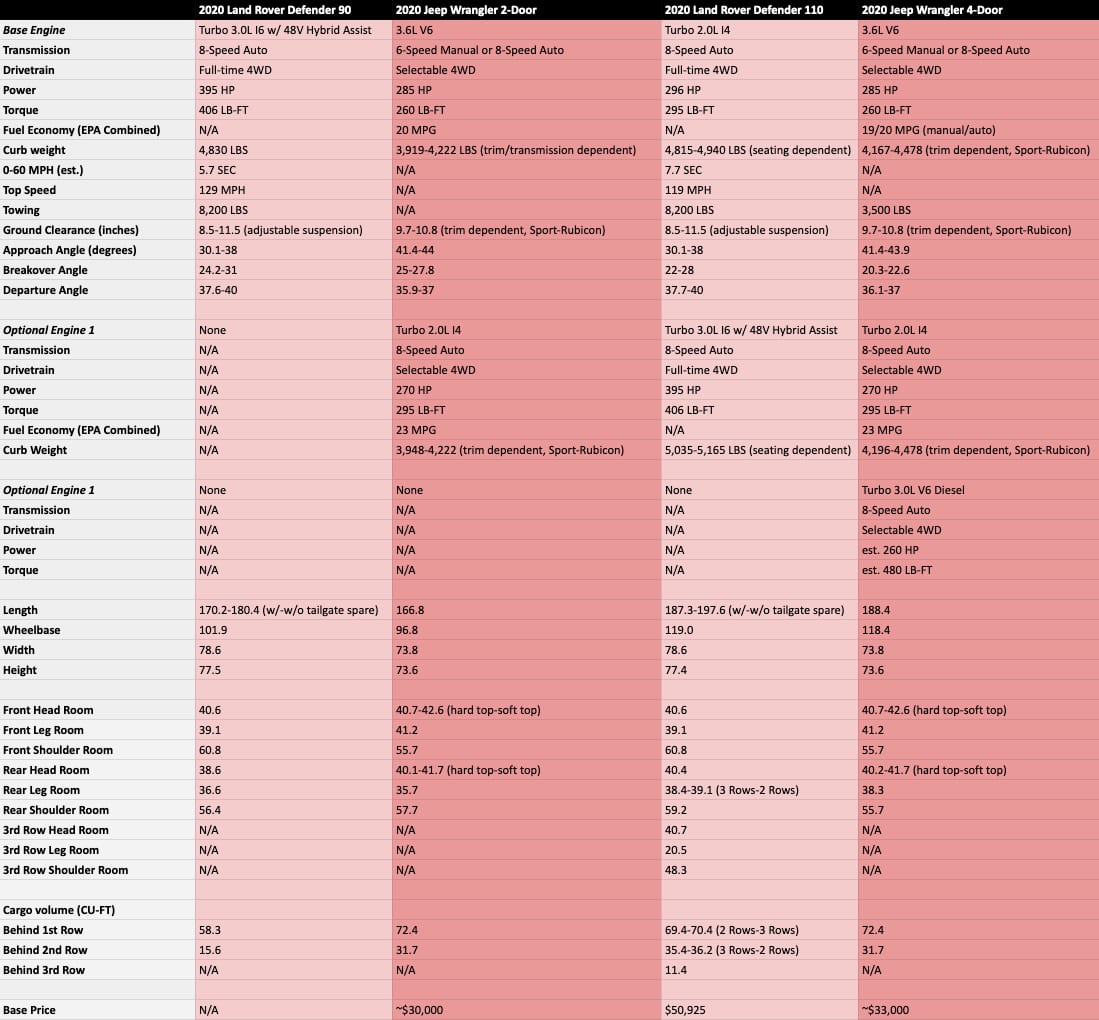 The Land Rover is the clear high-performance option of these two SUVs. Its base turbocharged 2.0-liter four-cylinder, offered only in the four-door Defender 110, is more powerful than either of the gas engines offered on the Jeep Wrangler. The Wrangler's four-cylinder matches it on torque, at least. The optional turbocharged 3.0-liter inline-six in the Defender makes over 100 more horsepower and pound-feet of torque than either Jeep gas engine. But if you're looking for diesel propulsion, along with its associated torque and fuel economy, the Wrangler will be your only option. Final specs haven't been released, but in the Ram 1500, the same engine makes 260 horsepower and 480 pound-feet of torque. Fuel economy hasn't been announced for the Land Rover or the diesel Wrangler. But if fuel economy is a concern, the four-cylinder Wrangler is the most frugal of the SUVs we have numbers on.

As for transmissions, the Wrangler is your only choice if you have to have a manual. It's available on both the two-door and four-door models, but only with the V6 engine. If you don't mind an automatic transmission, both SUVs come with variations on the ZF eight-speed auto.

Here, the Wrangler and Defender go in different directions yet again. The Wrangler relies on very traditional solid front and rear axles for its suspension setup. This allows for lots of axle articulation that helps make sure all four tires are on the ground and moving the SUV forward. To help with this, the Rubicon version offers disconnecting sway bars for further axle articulation as well as front and rear electronic differential lockers to keep power going to all four wheels.

The Defender uses a much more modern suspension setup with independent suspension at both ends. This can provide a more refined on-road driving experience, but can limit axle articulation and lead to having a wheel or two in the air at times when off-roading. Land Rover does include various terrain settings for the drivetrain to improve traction in different driving conditions. It will also offer a locking center differential and automatic locking rear differential to help improve traction.

Suspension design isn't the only thing to look at when considering off-road capability. You also want to see what kind of ground clearance and approach, breakover and departure angles each vehicle has, which determine how steep a hill or object your SUV can climb onto, clear, and descend down without hitting anything expensive. Though the Defender sits the lowest in standard settings, its adjustable suspension can lift it to have 11.5 inches of ground clearance, which is even more than the Wrangler Rubicon's 10.8 inches. As for approach angles, both versions of the Wrangler will let you get started up a steeper hill. But when it comes to cresting and coming down, the Defender, in both 90 and 110 styles, can handle sharper and steeper objects than comparable Wranglers.

Comparing two-door and four-door models, both types of Wrangler are a bit shorter, narrower and lower than the comparable Defenders on the outside. Despite that, the Wrangler does have more head- and legroom for the front passengers, and more rear headroom than the Defender. The Defender has an edge when it comes to front shoulder room and rear legroom. The Defender 110 has an extra bonus in the availability of a third row of seats, something not available on the Wrangler Unlimited.

When it comes to cargo space, the Wrangler has the absolute maximum amount of space available. And when comparing the two-door models, the Wrangler has more space behind the rear seats. But with the four-door models, the Defender 110 has more cargo space behind the second row, something that's possible by having enough room to cram in a third row if desired. The Defender is also the clear choice if you want to tow, as it has a maximum tow rating of 8,200 pounds for both the 90 and 110 versions. The four-door Wrangler Rubicon is only rated up to 3,500 pounds, and the two-door model isn't rated at all. If you want a Wrangler to tow things, you're better off with the Gladiator pickup truck, which can tow up to 7,650 pounds.

The Jeep Wrangler is, unsurprisingly, the more affordable choice. Though pricing hasn't been announced for the 2020 model, it should start at about $30,000 for a base two-door Sport and about $33,000 for a base Wrangler Unlimited Sport. The Land Rover Defender starts at $50,925 for the 110. Pricing hasn't been announced for the 90, which will be available later in 2020, along with pricing.