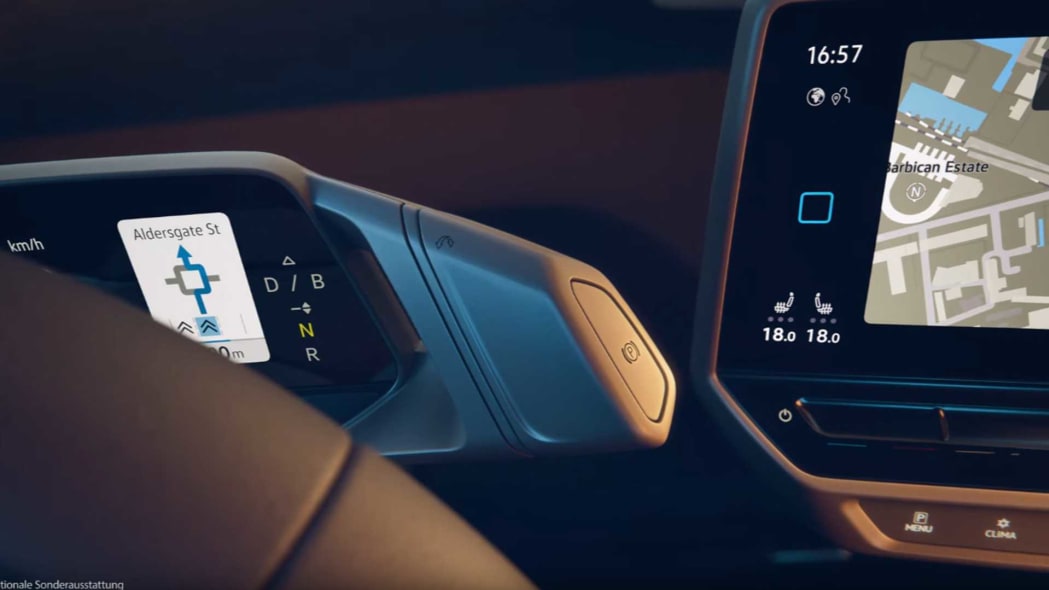 In May, Volkswagen accidentally published, then took down, a video showing the ID.3 in a fetching wrap of fuchsia swirls on a teal background. A few days later, the company showed off the car in an official press release. Seems the first part of that two-step has happened again, as various Volkswagen outposts are publishing a promo video of the ID.3 interior and technology features before the video got pulled. Folks fast with a right-click copied the vid and took screenshots, giving us a better view of what's coming Europe's way when VW shows off the production EV at the Frankfurt Motor Show in September.

Turns out we've already seen these components in the Seat el-Born concept, which was brought to this year's Geneva Motor Show by VW's Spanish brand. The dash cluster lives on a digital screen that, in the el-Born and this ID.3 video, is broken into three information displays for automatic cruise control and lane assist systems, speed and range, and navigation. Gear indicators are listed vertically along the right edge of the display. The gear selector forms a chunk of the right edge of the plastic frame holding the dash screen. To shift, the driver twists the selector toward or away from himself, akin to the technique used in the BMW i3. Going by the up and down arrows in the gear indicators, the ID.3 appears to offer several levels of brake regeneration.

The 10-inch infotainment screen in the Seat el-Born concept was divided into three panels of vivid color. The ID.3 screen in the promo video is broken into four much plainer, geometric panels, relinquishing everything Latin for everything Teutonic. Navigation takes up most real estate, leaving room for music, phone, and sound-setting panels. Based on the two temperatures appearing in the lower left corner – which the el-Born didn't have – the ID.3 likely offers dual-zone climate control. The lower portion of the screen contains capacitive sliders to change the temperature. The promo vid touts "Natural Voice Control," exemplified by a voice telling the hatchback, "Hello ID, I am cold," the car responding, "The temperature will rise soon." Beneath the screen reside buttons labeled Menu, Climate, Assist, and Mode.

In other news concerning the upcoming EV, a European Tesla owner who caught an ID.3 at a charging station said the hatch had rear drum brakes, which seems a decidedly European thing since the Renault Zoe and certain versions of the Opel Corsa-E use the same.

The ID.3 will come in at least three versions, with the top possessing a 77-kWh battery and a 204-horsepower rear-mounted motor good for 342 miles. We have two months before seeing the final product, but these peeks continue to justify our expectation of something worthy.