Two-thirds in survey see urgent problem, but just one-third would spend even $100

WASHINGTON — Nearly 70 percent of Americans, including a majority of Republicans, want the United States to take "aggressive" action to combat climate change — but only a third would support an extra tax of $100 a year to help, according to a Reuters/Ipsos poll released Wednesday.

The results underscore a crucial challenge for Democrats seeking to unseat President Donald Trump in next year's election. Many will have to balance their calls for strict environmental regulation with a convincing argument for why the changes are good for taxpayers and the economy.

"There isn't any doubt climate change has emerged as an important issue in this election," said G. Terry Madonna, Director of the Center for Politics and Public Affairs at Franklin and Marshall College. "But when it comes to how you will pay for it, that's what can make a big difference."

Nearly all the Democratic contenders for the White House have supported the goal of quickly eliminating U.S. carbon emissions by replacing fossil fuels with clean energy. Such ideas aim to tap into a growing sense of urgency about global warming on both sides of the political divide.

Republicans and some labor unions have panned their ideas as a threat to jobs and not feasible in a country that has become the world's top oil producer.

Americans generally support Democratic calls for urgent action on climate change, according to the poll of more than 3,000 people conducted between June 11 and 14. A majority believe the United States should transition to 100% clean energy within a decade, and that clean energy would on balance "create new jobs and growth" instead of "hurt jobs and the economy."

But the plans quickly lose support when voters sense they come with a personal price tag, such paying extra taxes, higher power bills, or trading in their current vehicle for an electrical one, the poll showed. 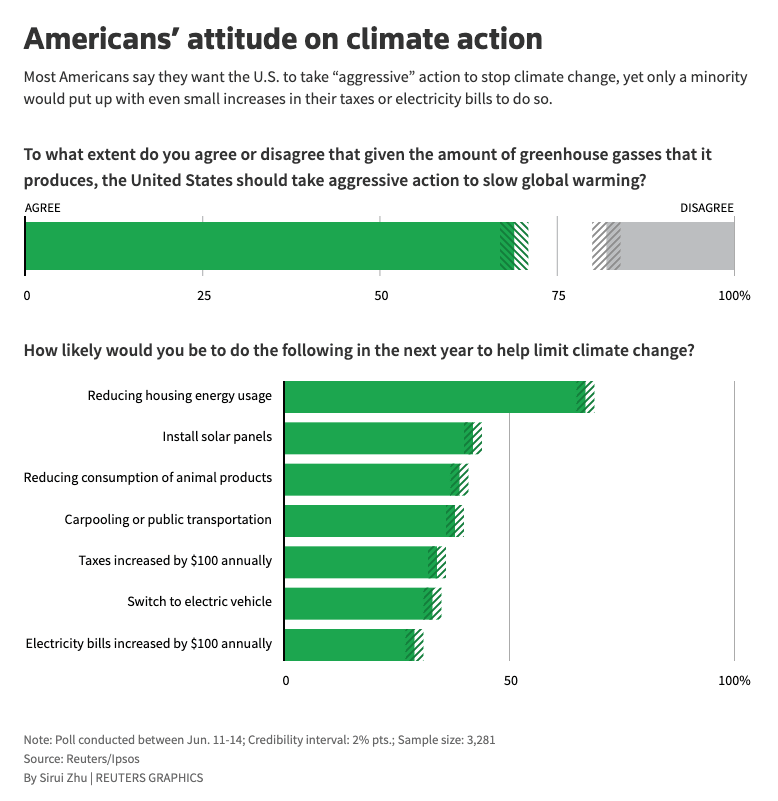 Trump's successful bid for the White House in 2016 was centered on a promise to boost the manufacturing and fossil-fuels industries by rolling back environmental regulations he said were killing blue-collar jobs.

Since then, he has replaced former President Barack Obama's centerpiece climate regulation cutting carbon emissions from power plants, moved to weaken vehicle fuel economy standards, and promised to withdraw the United States from an international accord to fight global warming.

Over the same period, Democrats who are enraged by his policies and alarmed by research about the accelerating threat of global warming have shifted far left of their party's 2016 platform on climate change, which called for deriving 50% of electricity from renewable sources in a decade and an 80% reduction of greenhouse gases by mid-century.

Sixteen of the 20 leading Democratic contenders, for example, have endorsed or co-sponsored the so-called Green New Deal, a non-binding Congressional resolution to end the fossil-fuel economy within a decade through massive government investments in clean energy. The resolution was introduced by Senator Ed Markey and Representative Alexandria Ocasio-Cortez.

The Green New Deal would also create an economic safety net for communities affected by the impacts of climate change and the shift away from fossil fuel use, including through guarantees of healthcare, jobs, and training.

Jay Inslee, a Democratic candidate who has focused his entire campaign on climate change, said he believes many politicians underestimated the public's concern about global warming: "This is a winning issue for us in the general election against Donald Trump," he said.

The Republican National Committee said it viewed the Democratic field's climate proposals as a gift to Trump.

"Voters will face a clear choice in 2020: four more years of lower taxes, a booming economy, and a safer America under President Trump's leadership, or a socialist America led by a radical Democrat agenda," said Allie Carroll, RNC spokeswoman.

Trump has already attacked the Democrats' embrace of the Green New Deal, casting the platform as an absurdity that would "permanently eliminate all Planes, Cars, Cows, Oil, Gas & the Military" because of their carbon footprints.

Tim Murtaugh, a spokesman for the Trump campaign said, "Trump will continue to advance realistic, market-based solutions to promote a cleaner environment and reduce emissions."

According to the poll, 69% of Americans — including 56% of Republicans and 71% of independents — believe the United States needs to take "aggressive" action to fight climate change.

Some 78% believe the government should invest more money to develop clean energy sources such as solar, wind and geothermal, including 69% of Republicans and 79% of independents.

About 65% of Americans identify themselves as Republican or Democrat, while 23% consider themselves independent, according to the poll.

More than half of Americans either strongly or somewhat support the idea of weaning the United States off fossil fuels entirely within 10 years — the central tenet of the Green New Deal — including a third of Republicans and 57% of independents.

Most Americans believe such a transition to clean energy could be good for the economy, according to the poll. Some 58% think it would generate jobs and growth, while just 14% who believe that fighting climate change would kill jobs and hurt the economy.

Among those who believe that clean energy can be good for jobs and the economy are 43% of Republicans and 62% of independents, the poll showed.

Support for such changes dropped off dramatically, however, when poll respondents where asked whether they would be willing to assume certain costs to achieve them.

Only 34% said they would be very likely or somewhat likely to pay an extra $100 a year in taxes to help, including 25% of Republicans and 33% of independents, according to the poll. The results were similar for higher power bills.

Currently, about 1 percent of cars sold in the United States in 2017 were electric, according to EVAdoption.com, which tracks the industry. Meanwhile, about 2 percent of U.S. homes had solar installations at the start of 2019, according to the Solar Energy Industry Association.

Alex Conant, a Republican pollster with Firehouse Strategies, said that he felt Democrats may be vulnerable to Republican arguments that their climate proposals would hurt the average American's pocketbook.

But he sounded a note of caution for Republicans, warning that neglecting the rising public concern about global warming could be a mistake.

"If there is a devastating hurricane, more wildfires or extreme weather in 2020," he said, "Republicans will need to be willing to talk about climate change."