Air-cooled engines take over the backlot of Universal Studios Hollywood It's a crisp Saturday morning and I'm strolling along the idyllic sidewalks of Hill Valley from the Robert Zemeckis films. To the right of me is the courthouse where Doc Brown precariously hung his sketchy, uninsulated, exposed metal cable around the hands of the clock, ziplining down to get to the loose connectors. To the left of me is the street where Marty McFly sped up to 88 mph to get his impeccably timed, 1.21-gigawatt hit of lightning. Instead of a DeLorean stealing the scene, though, the vehicular stars are the rows upon rows of parked Porsches.

The name of today's production? Luftgekühlt 6. The location? The backlot of Universal Studios Hollywood.

Leaving the Courthouse Square from the Back to the Future films, I meander through urban film sets I've seen in countless films, TV shows and commercials. It's been years since I was last here, sitting in a tram on the Studio Tour that takes visitors inside the working production spaces. Today, Porsches of every color line New York Street and its side capillaries. Just as the building facades span different periods of the Big Apple or some other fill-in-the blank metropolis, the varying vehicle models span generations. This doesn't include modern automobiles however, they are limited to the era when the engines came air-cooled – two words that, when translated to German, are condensed into one: luftgekühlt. 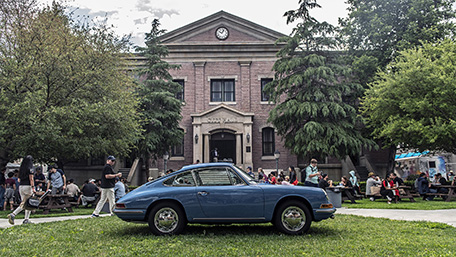 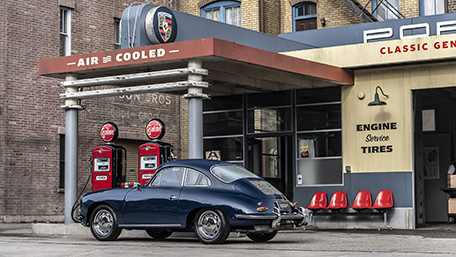 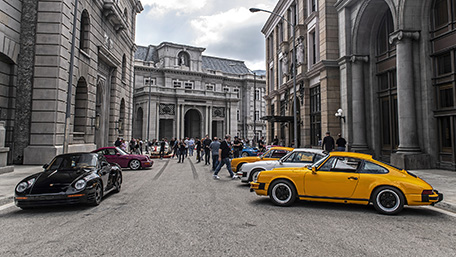 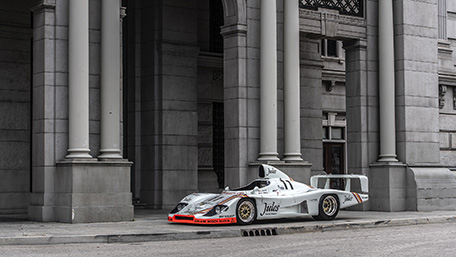 Crossing James Stewart Ave, the setting makes a hard transition from city slicker to cowboy. In Western Town, buildings and brownstones give way to two-story, wood-sided structures with signs painted in words such as "General Store," "Apothecary" and "Guns." Yee-haw. John Wayne may have filmed here in the past, but the only outlaws on the dusty streets this morning are of the customized Porsche kind.

Beyond hosting a car show in what is the most epic of locations, where the Luft team crushes it is in the details. The faux theater on New York Street has the event name and date on both sides of the marquee, juxtaposed against a red 935 and a Gulf 917 K. The throwback gas station set across from the Back to the Future courthouse has been converted to a Porsche Classic pop-up (#sponsor) – in its bay is a 356 shell on a rolling chassis stand, flanked by a wall of vintage-looking toolbags. Somehow, someone was able to convince the suits at Universal to allow the petrol station's signage to be swapped with Porsche crests and lettering. 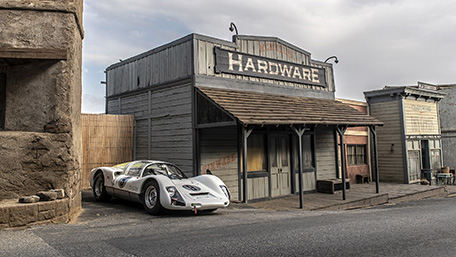 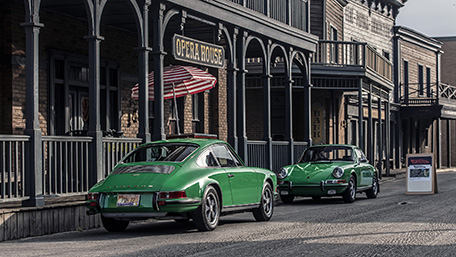 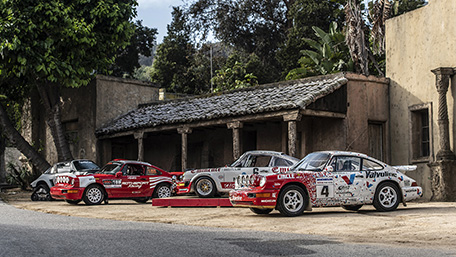 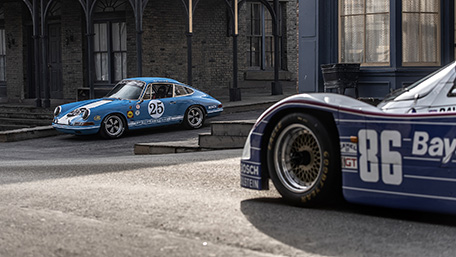 It's this effort by co-creators Patrick Long and Howie Idelson, as well as Jeff Zwart, to produce a highly curated automotive experience that draws a diverse crowd of people and air-cooled Porsches. With the value of a standard display car beginning at about the median U.S. household income, specialty trims quickly climb into college admissions scandal kind of money. In the elite club, there are P-cars worth a million-plus.

What kind of Porsches are A-list Hollywood money? Alexander Weaver from RM Sotheby's, the auction company specializing in classic cars, lent his expertise, identifying the candidates we could find from a socioeconomic status foreign to me.

"The key elements that make a Porsche valuable," explains Weaver, "are the exclusivity of the model, the racing history of a particular car, the owner history, what role it played in the development process, and the works heritage of the brand." And here I am, pumped when a Carfax on a used Honda comes back clean.

Note, the figures provided are rough estimates only. Actual value, just like mileage, may vary.

Built for homologation purposes, only 57 GT2-spec 993s were produced with a twin-turbo flat-6 engine. Pair the rarity of the trim and the fact that one in Riviera Blue sold at auction in 2016 for $2.4M places this car's value easily in the million mark. 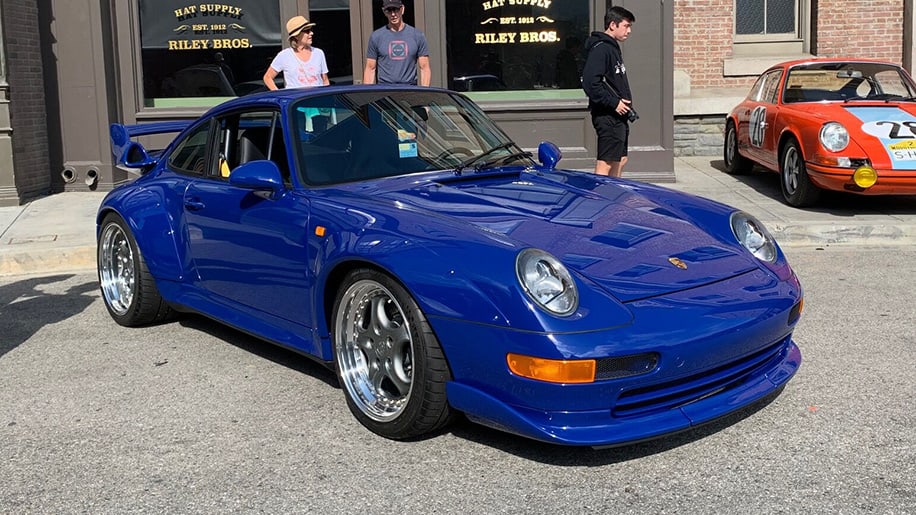 Built to Group 4 specs, a total of 31 934s were built using a turbocharged flat-6 engine. This particular 934 was recently restored by Canepa. 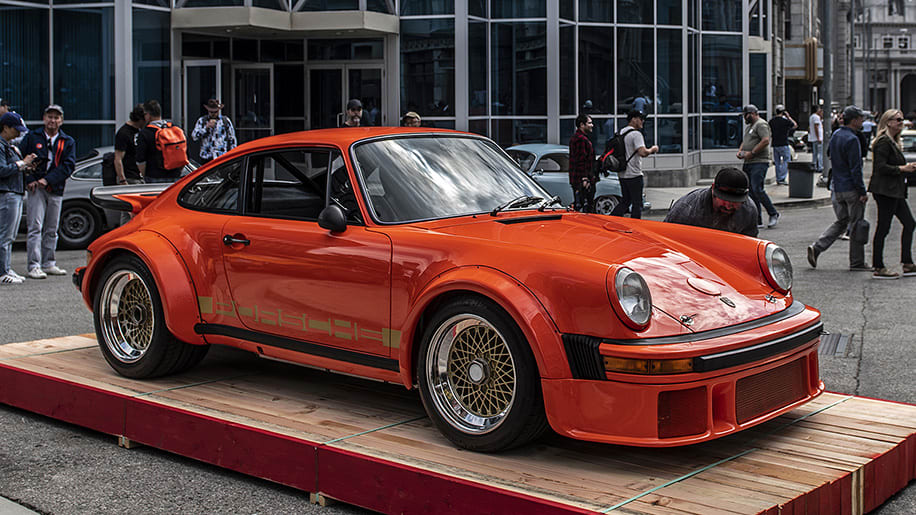 A replacement for the 956, the 962 was built for IMSA GTP class of racing. This prototype Porsche was owned by Bayside Disposal and finished second at Road America in 1985. 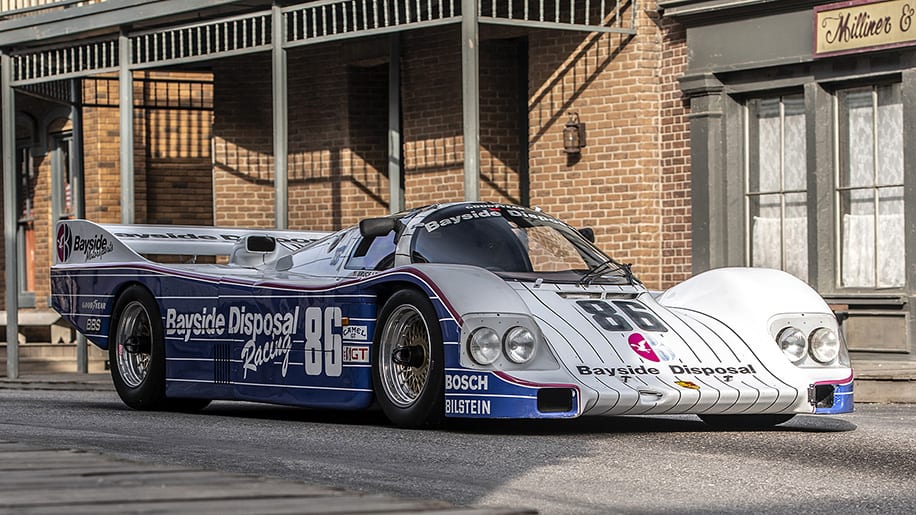 A total of 50 906s were built for Group 4 homologation rules. The vehicle utilized fiberglass resulting in a car that weighed only 1,280 lbs, significantly lighter than the 904 model it replaced. 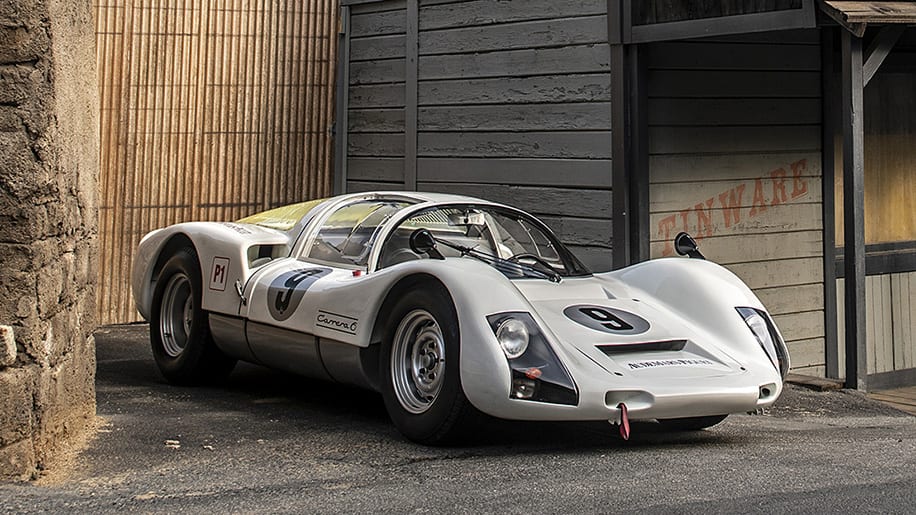 Restored by Canepa, this 959 features cosmetic and performance upgrades, resulting in 800 hp from its twin-turbo flat-6. Other modifications include wheels remanufactured with an 18-inch diameter to open up tire availability. 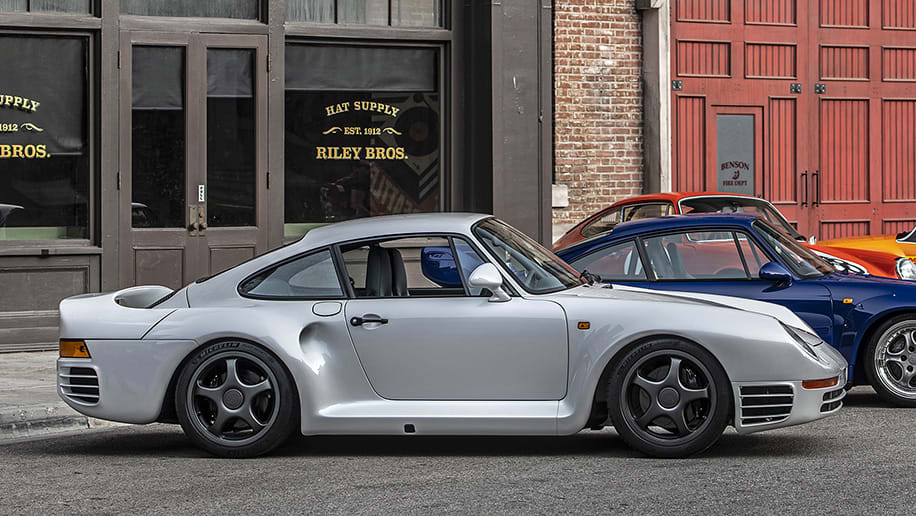 The 356 wearing #44 is constructed with an aluminum body, making it the only one of its kind in existence. 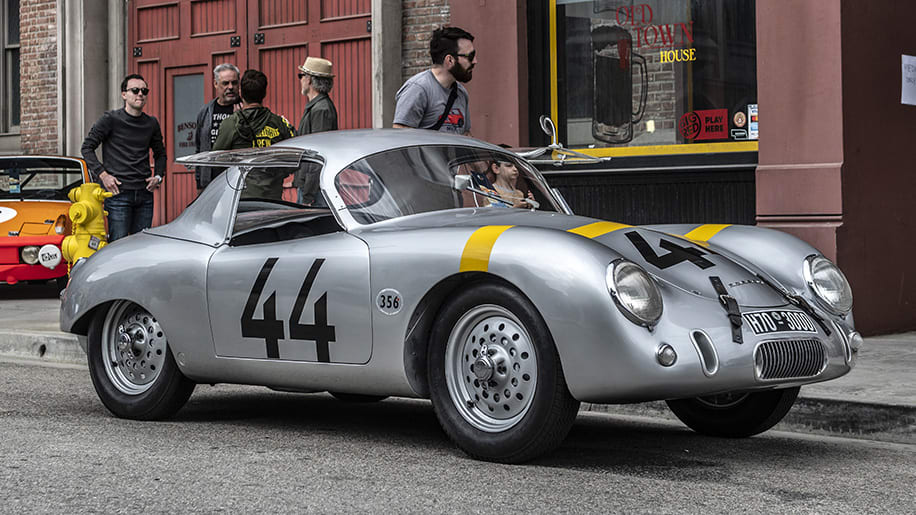 This is the first production 911 R, and is one of 20 of the lightweight race cars. This particular vehicle went on to set five world records at Monza, driving 96 hours straight. 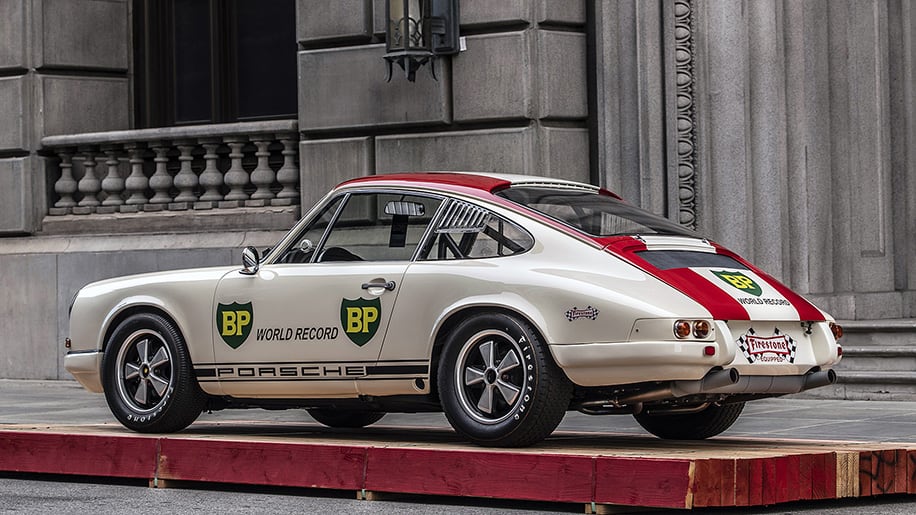 Paul Newman raced this 935 along with Dick Barbour and Rolf Stommelen at the 1979 24 Hours of Le Mans, resulting in a second overall finish and a class win. In 2016, Adam Carolla purchased the car for $4.4M. 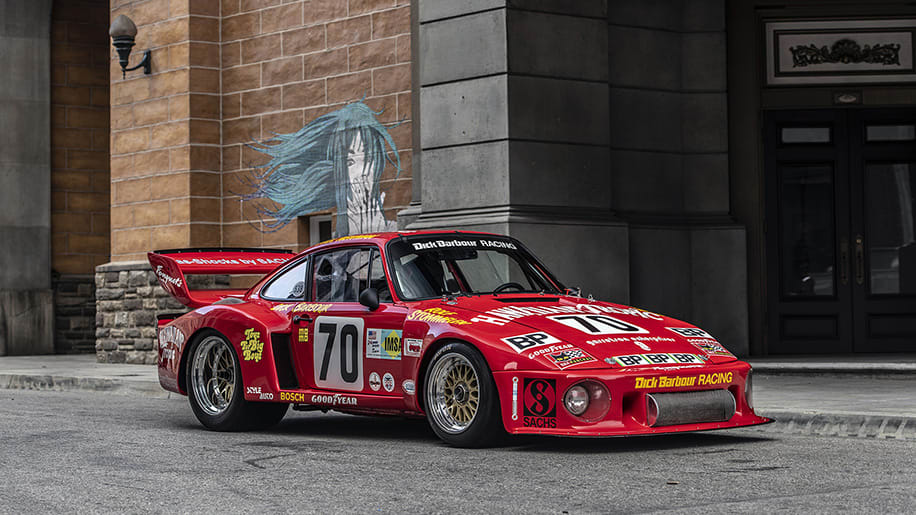 Called X-ray for the red livery that reveals the inside of the car, this 935 competed in Le Mans in 1977, finishing third overall and winning its class. 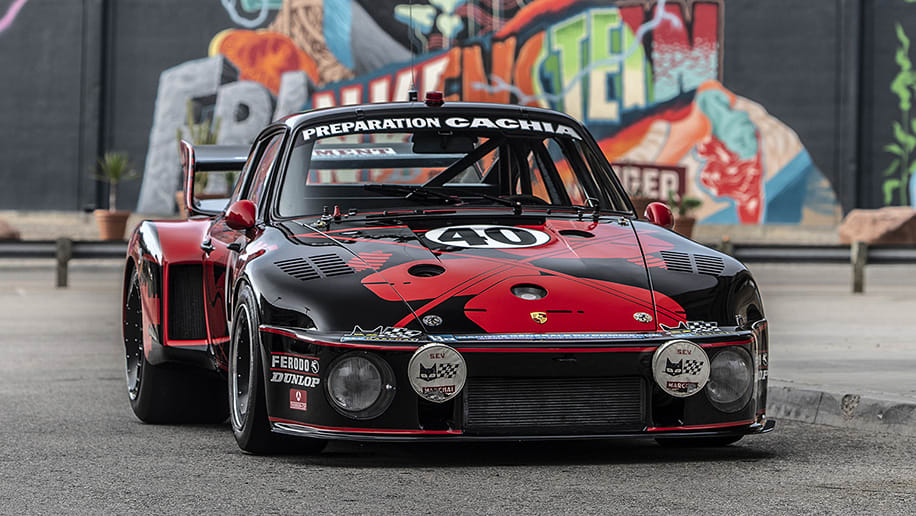 Only 90 Porsche 550s were produced for motorsports, of which many were involved in accidents. This particular specimen is very original and therefore very desirable. 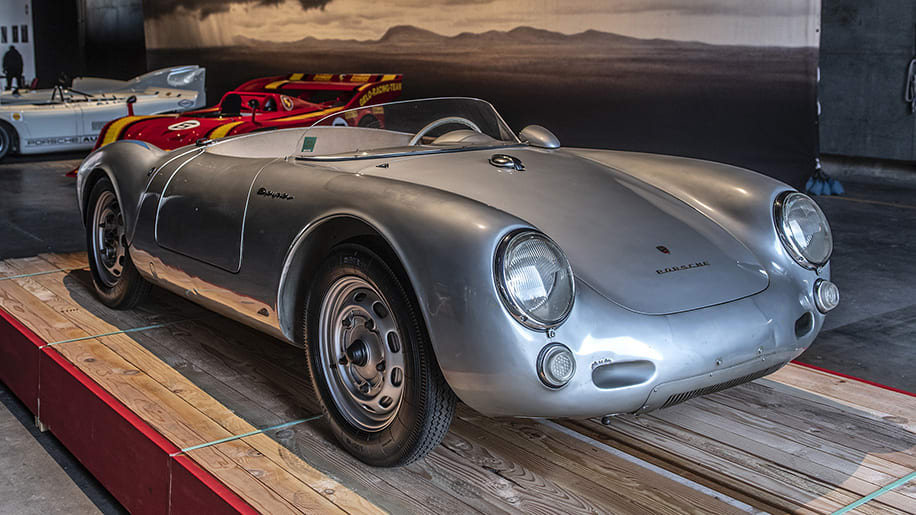 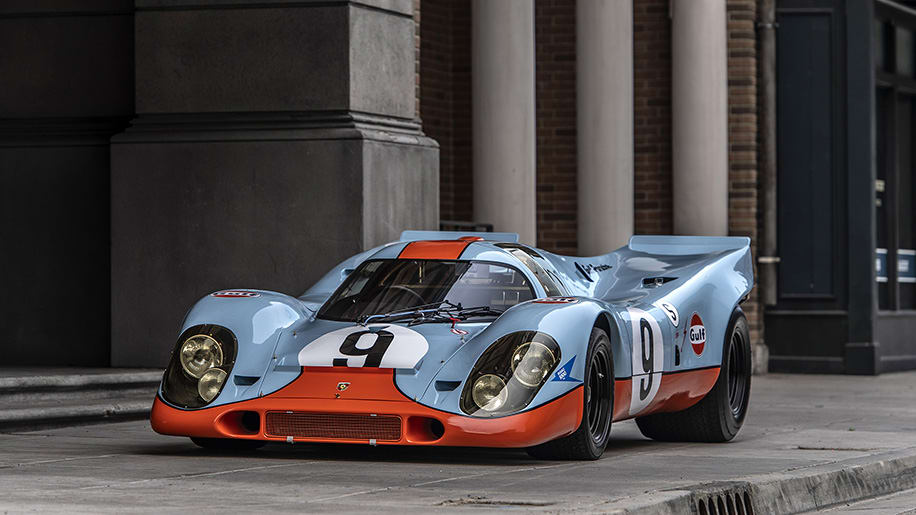 The 917/10 was developed from 917 coupes and would go on to compete in and win championships in Can-Am and Interserie with its turbocharged flat-12. This red specimen wearing #6 is one of the most original 917s, winning three first place finishes. 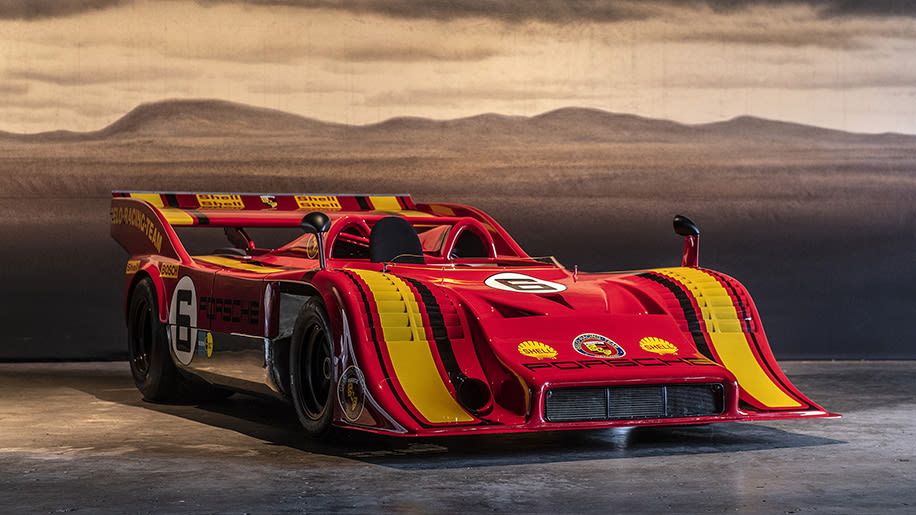 The white with blue racing stripes adorned 917 P/A was built to enter the popular Can-Am series in 1969 at the behest of Vasek Polak, the Porsche Audi distributor in California. This is one of only two machines constructed and relied on a naturally aspirated flat-12 engine. 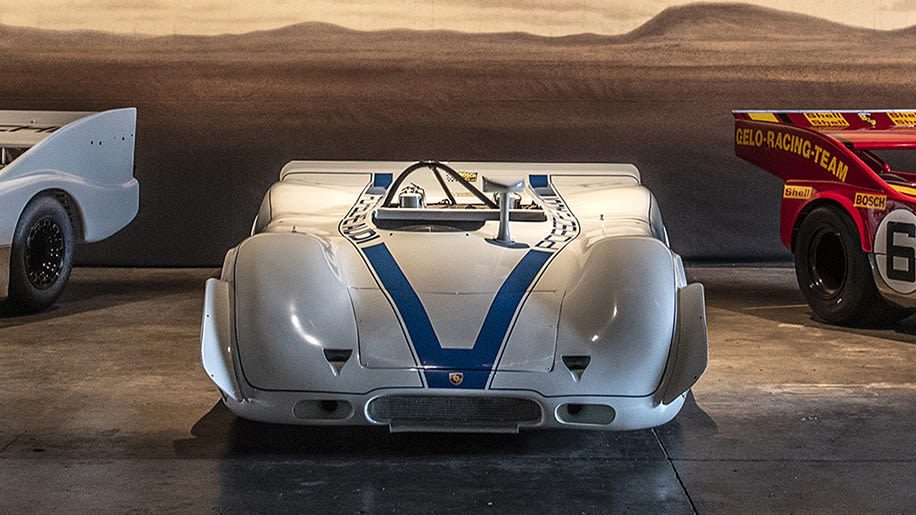 An evolution of the 917/10, the 917/30 boasted an extended wheelbase and additional horsepower out of its twin-turbo flat-12 engine. Only six of this variant were built. 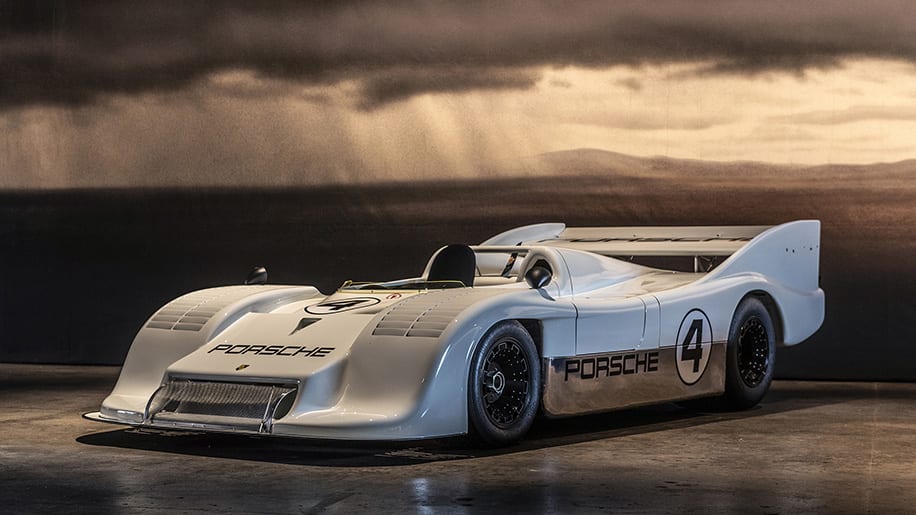