VW's Electrify America launches app, takes us behind the scenes Electrify America has been making huge strides over the past year, since it installed its first ultra-fast EV charger in May 2018. The charging network — borne of the consent decree between Volkswagen and the EPA over the Dieselgate emissions scandal — promises to bring fast charging to the growing number of Americans who own EVs without a Tesla badge. Like, really fast charging: up to 350 kW, which is enough juice to add 20 miles of range to a car's battery per minute. Today, Electrify America has announced the launch of its own mobile app for its network, as well as membership options for users.

Ahead of this announcement, Electrify America flew us to its headquarters in Reston, Virginia to catch up on its progress, its plans, and to experience the technology in person.

First, a little background. Electrify America plans to spend $2 billion on its EV campaign over the course of 10 years, which largely focuses on building charging infrastructure, but also includes awareness/education and green city initiatives. The group is handling this in a series of four cycles between 2017 and 2026. Cycle one, which ends halfway through 2019 will see 484 charging sites commissioned in 42 states — more than 2,000 total DC chargers, and more than 2,800 Level 2 chargers — to the tune of $370 million. Essentially all are underway, with more than half of the sites built. When we arrived in Virginia Wednesday morning, 159 fast chargers were online. As of Friday, 164 sites were open, with an average of about four chargers per site. By the time you read this, that number will have gone up. Check out the sites at Electrify America's map.

The exciting thing about Electrify America is the capacity of their DC fast chargers. They're installing 50-, 150- and 350-kW chargers. The Porsche Taycan will be the first passenger EV in the U.S. that will be able to take full advantage of the 350-kW chargers, which will provide up to 20 miles of range per minute. These 350-kW chargers will be the first to use liquid-cooled charging cables. The non-conductive liquid coolant, which is in direct contact with the copper wiring inside the cables, allows it to handle 350 amps without having huge amounts of copper or melting the cables. (It seems like such a silly thing to get pumped up about, but we weren't the only members of the press gathered who noted that liquid-cooled charging cables are badass.)

Electrify America is sourcing the 350-kW chargers from four suppliers (Signet, ABB, BTCPower and Efacec, if you were wondering), though they'll all look similar, work the same and have the same 15-inch touch interface. In addition to a CCS connector, each DC unit also has a CHAdeMO connector (though the CHAdeMO standard is limited to 50-kW charging). 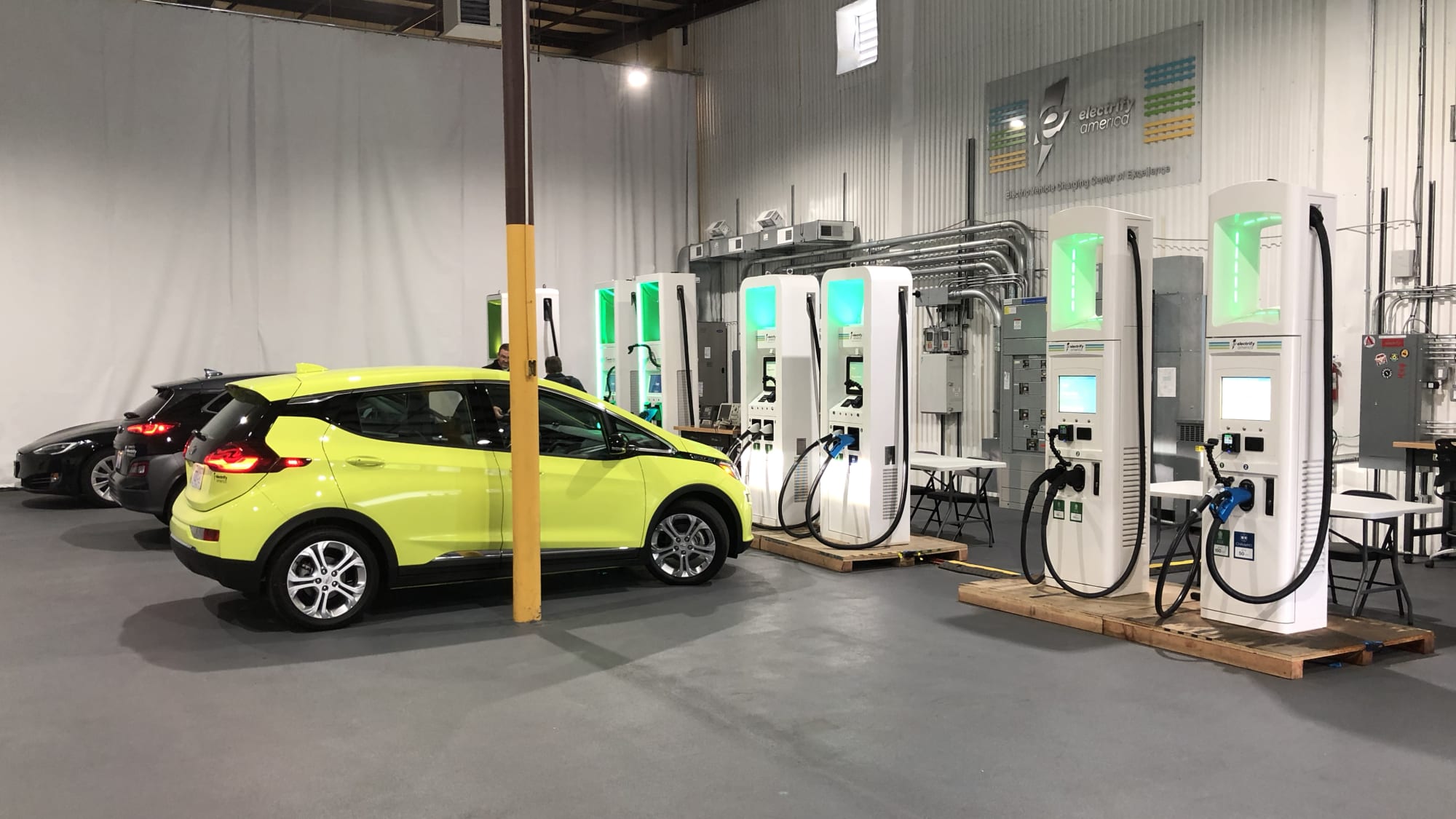 So back to the news, which includes a new Electrify America mobile app, as well as membership plans. The app, which we had the opportunity to play with, allows you to find a charger, pay for a charge and track your charging session all from your phone. The charger finder not only tells you where to find it, but also how many of each type of charger are at the site, the cost of using them and whether or not they're currently in use. You can save your payment information to the app, or just walk up and swipe your credit card (there's even Apple Pay capability). While charging, you can check how much of a charge you have and how much time until you have a "bulk" charge of around 80 percent, and get notifications when charging starts, slows and stops. In addition to providing useful information, the app was easy to use, and we also found it nice to look at, whatever that's worth.

To coincide with the launch of the app and membership plans, Electrify America's per-minute pricing is now structured around the charging power level. Charging at zero to 75 kW will be the cheapest, and price will increase at 76 to 125 kW and again at 126 to 350 kW. The price tier you pay is dependent on the charger you use and your vehicle's charging capability. For instance, you won't be charged the 350-kW price if your car is only capably of 50 kW. Electrify America says it will reduce its standard price of about $0.30 to $0.35 per minute by about 20 percent.

If you're still reading, you're our type of person — one who can get geeked about EV chargers — so we'll supply you with a little more of what we experienced and learned. Another interesting piece of technology Electrify America is working on is something it calls "Plug & Charge," also known as the ISO 15118 standard. This is a type of vehicle-to-grid communication that allows you to simply park at a charger, plug it in and walk away. The car and the charger communicate to authenticate, process payment and initiate charging without the need of a credit card, member card or mobile app. This technology will be especially important for the future of autonomous vehicles, which may not have a human present to pay for charging. Electrify America says it will be the first to demonstrate Plug & Charge technology. Meanwhile, the race is on for automakers to add the capability to the vehicles they sell.

We mentioned the cycles Electrify America is working under, and the second one is approaching soon. It begins in Q3 2019, and runs through Q4 of 2021. During that period, its budget for infrastructure is $388 million, with another $62 million going toward education, awareness and marketing. Education and Awareness is brand neutral, and runs the gamut from things like highway signage for charging stations to participating in STEM education. On the infrastructure side, Electrify America will be doing more than putting EV charging station in big cities and busy highways. It will also be experimenting with rural sites, including a $2 million project in rural California.

We'll be watching what Electrify America does closely. Too long has a lack of charging infrastructure been a barrier to EV adoption, which is something Tesla has addressed better than anyone else (and for which we heard Electrify America President and CEO Giovanni Palazzo praise the California automaker). Now, thanks in no small part to an emissions cheating fiasco, we have someone working to provide solutions for the rest of the EV universe. And not only is Electrify America making it possible to charge in more places, it's making it easy and it's making it fast. While it'll be a while before many vehicles can make full use of the 350-kW chargers, they'll be ready when those cars finally arrive.