It really packs a punch

A special product that marks a new direction for Kia. Sharp styling and a comfortable, well-appointed interior are paired with solid driving dynamics. It only really falls off when you push the car to its limits on a track, but a great GT for the streets.

8.5
One of the big draws of our long-term 2018 Kia Stinger GT is its twin-turbo 3.3-liter V6. With 365 horsepower and 375 pound-feet of torque hooked up to a rear-drive-based drivetrain (rear-drive is standard), it's an exciting proposition. In real life it lives up to the promise with only a few minor caveats.

First the good stuff: This engine is a real ripper. It feels much, much stronger than the numbers purport. Shove the throttle down and the Kia shoves you back and doesn't let up. Your only reprieve is at redline when it shifts, then the process starts again. This sensation is accessible anywhere in the rev band, too, a benefit of peak torque arriving at just 1,300 rpm. It's an exciting and addictive feeling, and it matches the Stinger's fierce appearance.

From the driver's seat, it sounds good but not great. It produces a smooth, deep growl, but it's flat. Other V6s have more of a gargle, or a howl or a shriek that provides personality. The Stinger's V6 sounds generic in contrast. Bystanders won't even get a generic growl, though, as the car is as quiet as a Camry from the outside. On the plus side, keeping the Stinger GT quiet does help it stay peaceful on commutes and road trips, but some kind of electronically adjustable exhaust would really liven up the Stinger GT's soundtrack without sacrificing refinement. 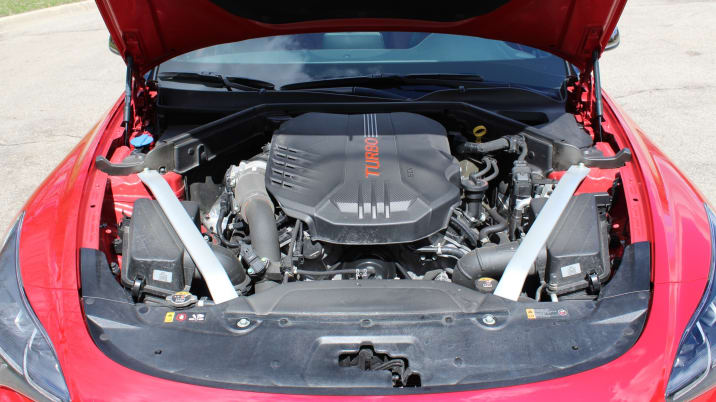 In addition to some better pipes, the Stinger GT could use better throttle response. We've become accustomed to wickedly responsive turbo cars nowadays, so it's a little surprising to hop in the Stinger GT and feel a moment's pause before the revs rise and the boost hits. The slow response works the opposite way, too, with acceleration continuing for a moment after releasing the gas pedal. Sport mode helps alleviate the lag, but it never disappears entirely. Still, you can adjust to accommodate the sluggish throttle response, but the Stinger would be an altogether more confidence-inspiring car without it.

Finally, when it comes to fuel economy, the Stinger GT meets expectations. The EPA rates it for 17 mpg in the city, 25 on the highway and 20 in combined driving, and almost every entry in our fuel log fits that range. There were a couple refuels that revealed numbers as low as 15 mpg, though our Green Editor John Snyder managed to break 29 mpg on a trip. I also saw 29 mpg average indicated on the outgoing leg of a road trip, followed by 30 mpg average on the return trip, so if you're gentle on the highway, it could surprise you, but don't count on it. If you're really looking for good fuel economy from a Stinger, definitely opt for the 4-cylinder that's rated for 21 in the city with rear-wheel drive, 22 with all-wheel drive and 29 on the highway in either configuration.

One added bonus to this engine specific to the Stinger GT is the price. This V6 is used on almost every rear-drive-based vehicle from Hyundai and Kia, which means it can be had in every Genesis sedan, as well as the Kia K900. The Stinger is the cheapest at a base price of $40,295 for a new one. The next closest the smaller G70 at $44,745. The G80, similarly sized to the Stinger GT, starts at $56,245. On top of that, only the G70 with rear drive and the K900 have better fuel economy, and they only improve by 1 mpg in the city and in combined driving. So the engine is a good value when wrapped in the Stinger's stylish shell. All in all, we're happy with the Stinger's powertrain, but if Kia can hone some of the dull points, the Stinger will really be a stunner. 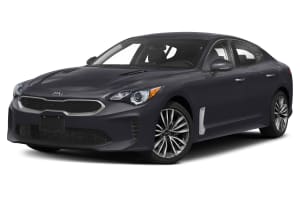