Questionable at first glance, but it starts to make sense as you dig deeper

James Riswick
Add a Review
At first glance, the 2019 Mini E Countryman plug-in hybrid is wildly unimpressive. It can only go a meager 12 miles on electricity alone, and when out of plugged-in electrons its turbocharged three-cylinder engine manages an EPA-estimated 27 mpg in combined driving. Pretty good for a compact SUV, but crap for a hybrid.

Its price tag is eye-watering. Although it starts at $37,750, including $850 destination, my test Countryman hit the register at $45,750 and still didn't have power seats, leather, satellite radio, adaptive cruise control, and other items that should be included on a vehicle at this price range in this segment (compact SUVs like the Mercedes GLA or Volvo XC40). Admittedly, if you skip our test car's $2,000 John Cooper Works Appearance package (not a bad idea), you can add some of those extra niceties instead, but the price would still be steep. An E Countryman, or 2019 Mini Cooper S E Countryman ALL4 as it's officially and ridiculously known, is roughly about $4,000 more than a comparable gas-only Cooper S Countryman ALL4.

There are some functional disadvantages as well. The plug-in hybrid lacks the regular Countryman's sliding back seat that adds cargo space without folding the seat backs and therefore wiping out passenger space (see video below). It also has only about 30 percent of the under-floor storage available in the cargo area, the result of the batteries needing to go somewhere. Now, Senior Editor Alex Kierstein reports that he found the E Countryman to still be perfectly space efficient. There was sufficient room for his wife to sit up front with a rear-facing baby seat behind her and a big stroller in the trunk. Still, he would've had even more room in the regular Countryman.

The bottom suitcase in the right photo would not fit in the E Countryman since it lacks this regular version's removable floor panel. 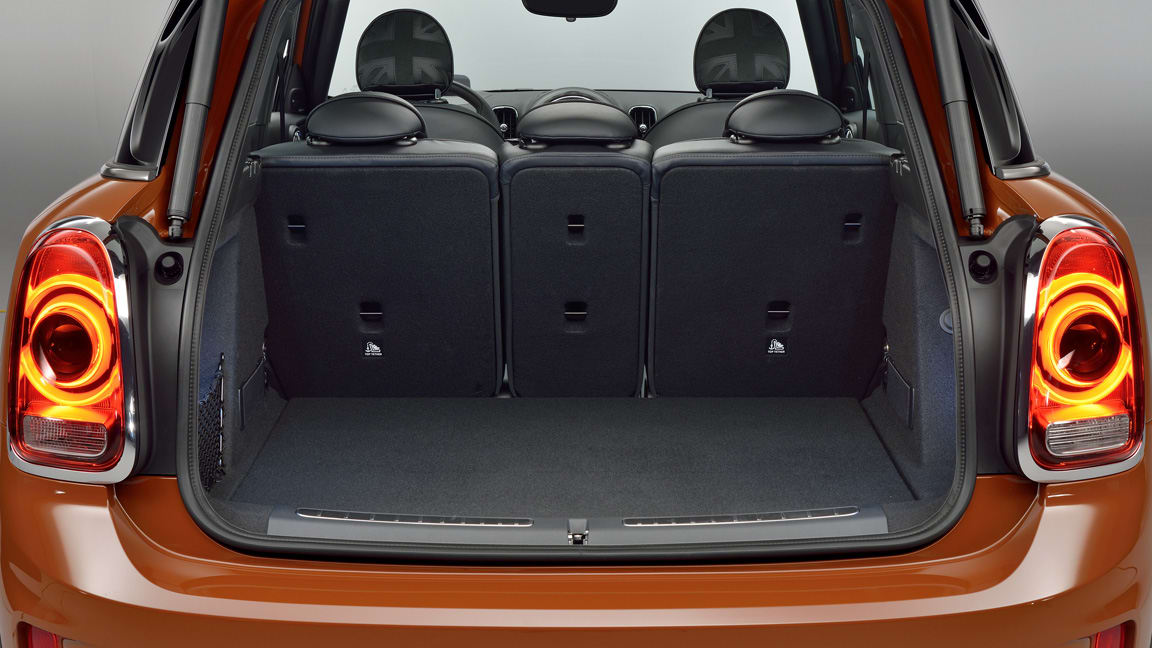 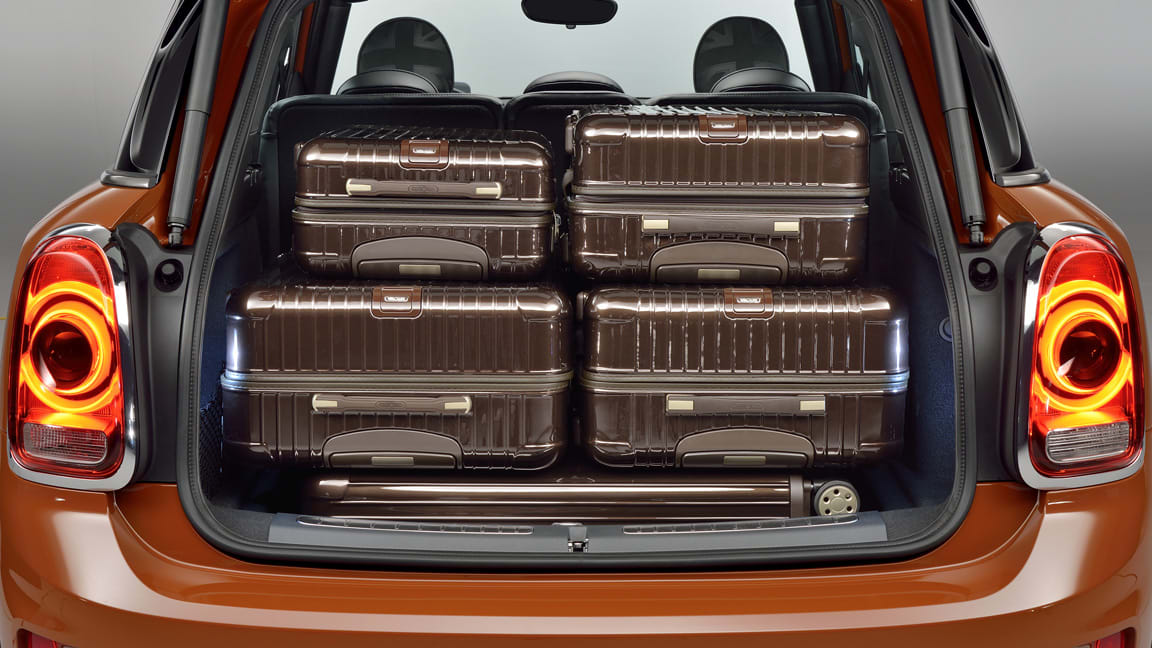 Really, all the above issues make the plug-in hybrid version of the Countryman a little hard to recommend ... at first. At second, third and fourth glances, it actually starts to make a lot more sense.

Sure it only went between 10 and 12 miles on electricity after I recharged it, but hey, that's still 10 to 12 miles further than any other Mini can muster. You can even utilize the "Save Mode" that allows you save that electric range for times when you know it'll be most beneficial (say, the urban-driving conclusion to the morning commute). Plus, that electric motor is still present when the plugged-in capacity is drained, adding that sweet, smooth, torque-rich electric power to initial throttle inputs and pairing well with the Mini's already torque-rich and surprisingly quiet three-cylinder turbo (combined output is 221 hp and 284 lb-ft of torque). The estimated fuel economy might be low for a hybrid, but the acceleration is comparatively both abundant and characterful. All that electric torque also goes exclusively to the rear wheels, preventing torque steer.

Besides, the EPA's 27-mpg estimate is misleading. That assumes you never plug it in, but if you do that, why bother getting a plug-in hybrid in the first place? That goes for any PHEV and indeed, their ultimate efficiency is more dependent on individual use than any other powertrain type, making EPA mpg estimates virtually useless.

As it is, I did plug in the E Countryman every night, and over the course of about 100 miles I averaged 40.3 mpg. Now, I typically do achieve EPA combined figures with gas-only test cars, so assuming that would be the case with a Countryman S ALL4 that gets an EPA-estimated 26 mpg combined, I'd be getting an extra 14 mpg by going with the plug-in hybrid. According to the EPA's annual fuel cost calculator, that's good for an average difference of $750 in gas every year. 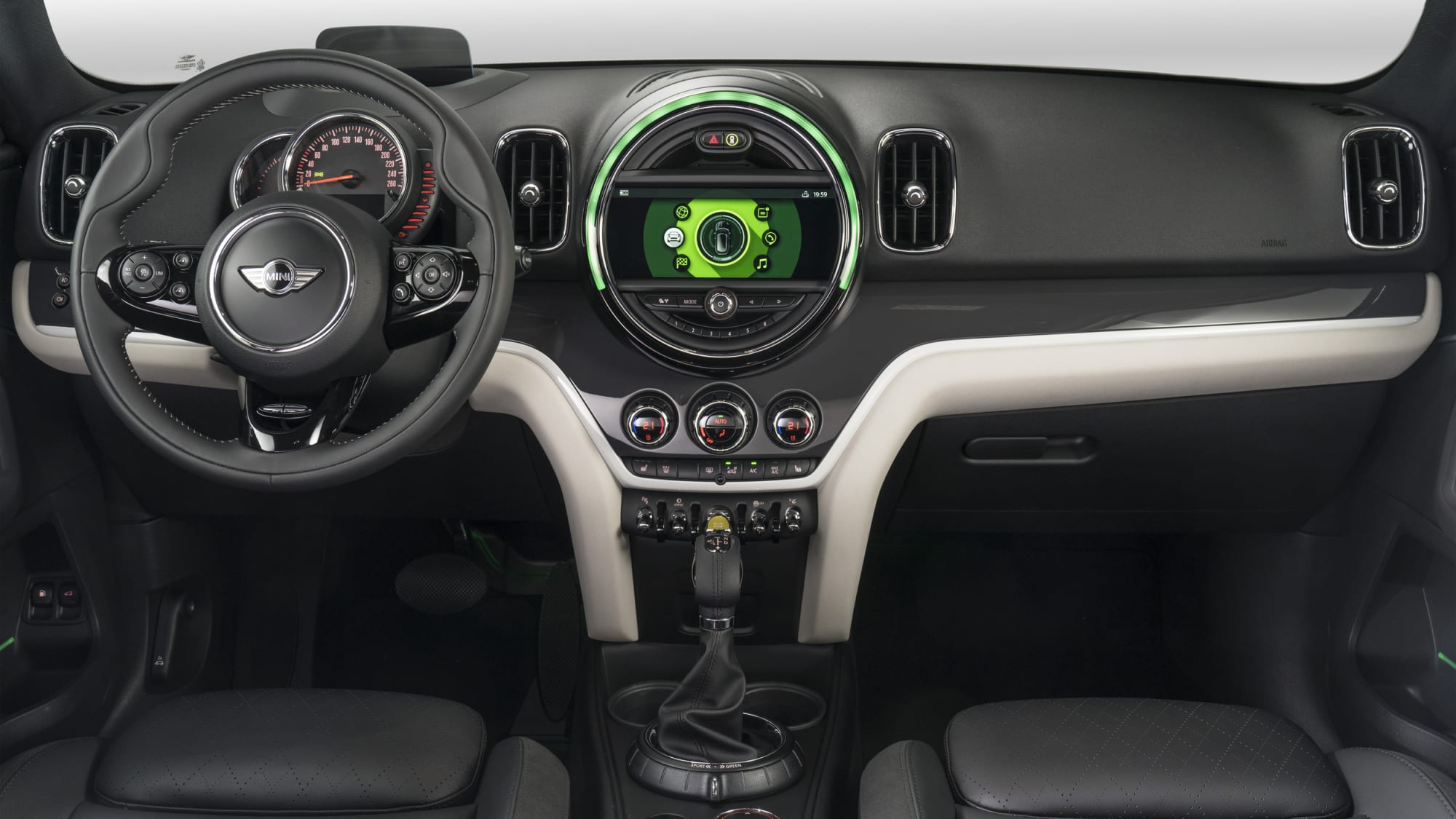 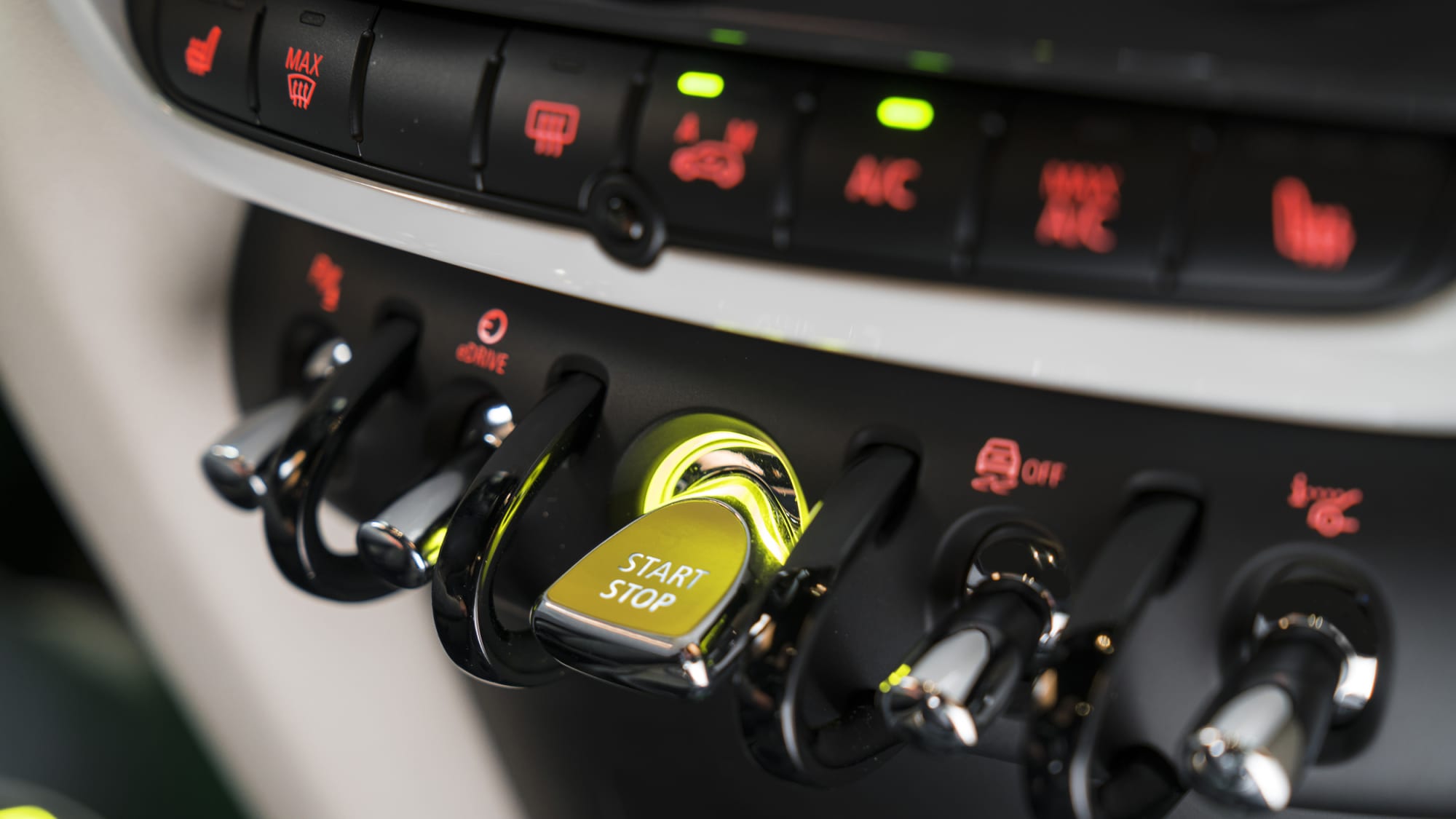 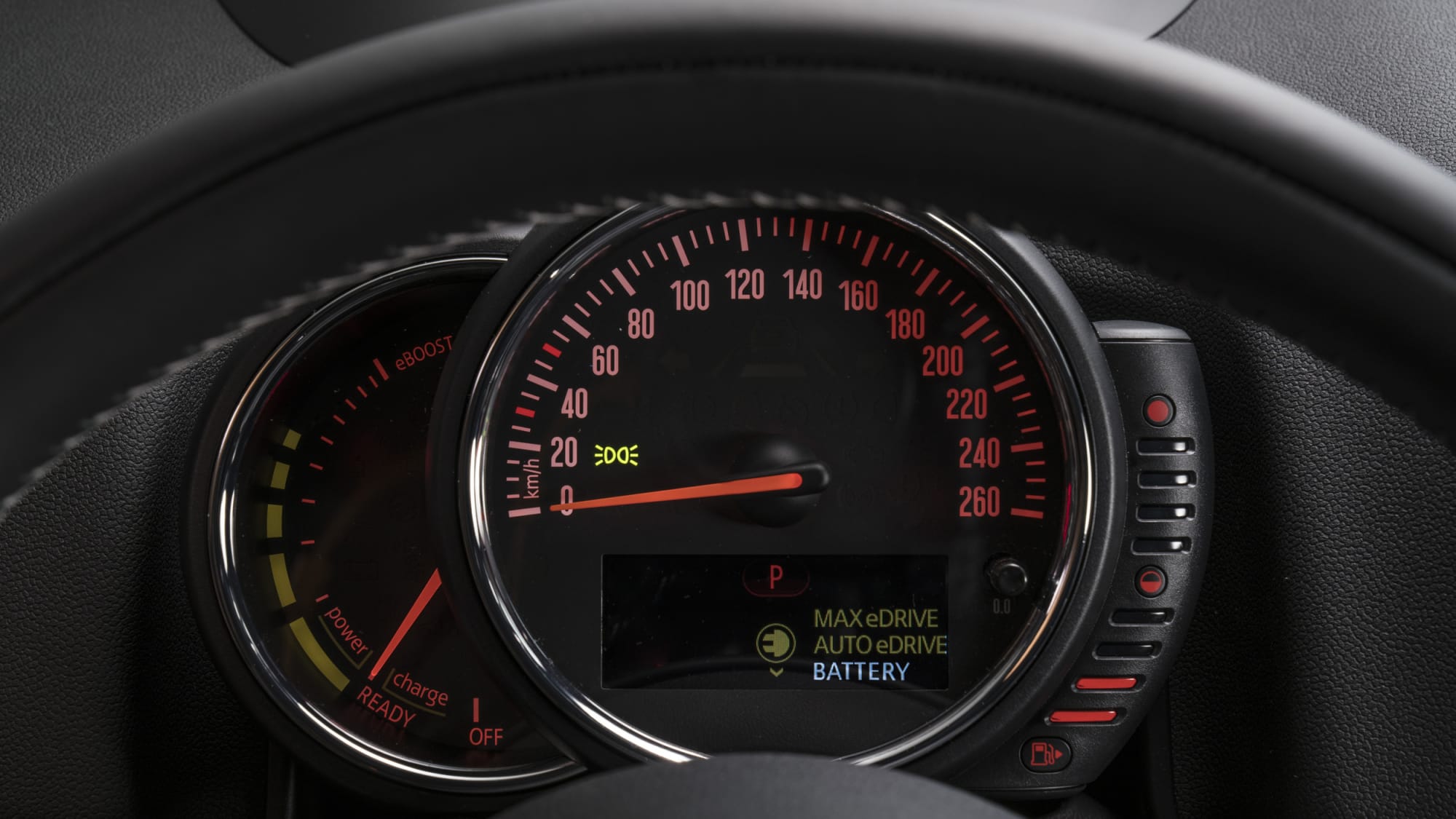 So, there's a good chance you'll be saving money to fill/charge it, but what about that price premium? A five-year payback for a plug-in hybrid (the PHEV's price premium relative a Countryman ALL4 S divided by $750) actually isn't that bad comparatively, but it's still five years, and you also have to consider the not insignificant reduction in cargo practicality mentioned above. That said, you might get even better fuel economy than I did, and it's important to note that an E Countryman won't really cost what the MSRP says.

For starters, there is a $4,001 federal tax credit, which effectively wipes out that price premium immediately and puts you into the green (figuratively in two ways). However, the E Countryman actually gets even cheaper (at least until April 30, 2019). Mini Financial Services is offering another $4,000 on the purchase of the Countryman plug-in hybrid, versus only $1,000 for all other models. Alternatively, if you're considering a lease, the estimated monthly payment is $349 with $2,999 due at signing. That is exactly the same as the front-drive Countryman S and $10 cheaper per month than the all-wheel-drive Countryman S ALL4.

So, at least at this particular moment, the plug-in hybrid is cheaper to buy/lease and run than a comparable Countryman S. I also found it just as enjoyable to drive, if even more so in particular ways related to the acceleration feel of its electric motor. I went into this test pretty dismissive of the E Countryman due to its electric range and price tag, but I ended up pretty darn sold on it. It's certainly not a fuel-saving plug-in hybrid like a Kia Niro or Honda Clarity, but this Mini is a terrific choice if you're will to sacrifice some efficiency (and dollars) for more fun, style and character than they offer.

The #Mini Countryman ALL4 E. Definitely not the best plug-in Hybrid around. Barely squeezes out 10 miles of range and I'm getting 40.3 mpg. But, it's a hoot to drive and the electric power actually makes it better. I also like it's size and packaging — the back seat is quite roomy. Unfortunately, that back seat doesn't slide as in regular Countryman and there's less under floor storage. Shame. At first glance the ALL4 E MSRP is stupid high, but the lease price is the same as an S. Perhaps not one I'd quickly recommend to others, but I could easily see myself getting one of these for myself or wife (she had an 05 Cooper S). 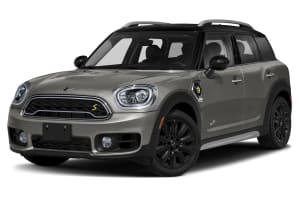