Looking beyond range and MPGe to the car itself

Add a Review
When evaluating electrified vehicles like the 2018 Honda Clarity Plug-In Hybrid, it's easy to become fixated on electric range. Oh, it's certainly one of the most important factors, but there are so many other things one must weigh when choosing one of these new-fangled eco-friendly cars. Things like comfort, quality, feature content, driving experience ... you know, the stuff we use to evaluate every other car out there.

This point is even more important to the Honda Clarity, since it's a considerably different vehicle than the bulk of current plug-in hybrid vehicles. The Toyota Prius Prime, Hyundai Ioniq and Chevrolet Volt all have dimensions similar to those of compact sedans. Interior quality and overall refinement are comparable to that gas-only segment, too.

The Clarity, however, is a midsize sedan. Its back seat is larger and more comfortable than all of the above, especially the Volt. It's considerably quieter and its ride quality is indicative of the bigger, heavier car that it is. If you own a Honda Accord or other midsize sedan, the Prius Prime will probably seem a bit cheap and unsubstantial. You'll feel right at home in the Clarity.

The interior is also a clear step up from other plug-in hybrids. With the Touring trim's leather upholstery and leather-wrapped steering wheel, it is genuinely luxurious, lining up with anything Acura sells. The open-pore wood trim on the center console and doors is lovely, while the rest of the cabin plastics are hard to fault. Given this premium vibe, I was stunned to find that the Clarity Touring ($37,490) actually costs less than a loaded Volt Premier ($38,445). Sure the Chevy has parking sensors, heated steering wheel and rear seats, OnStar and wireless smartphone charging, but when you factor in size, refinement, interior quality and comparable efficiency (more on that later), it's hard to see how the Volt should cost more. 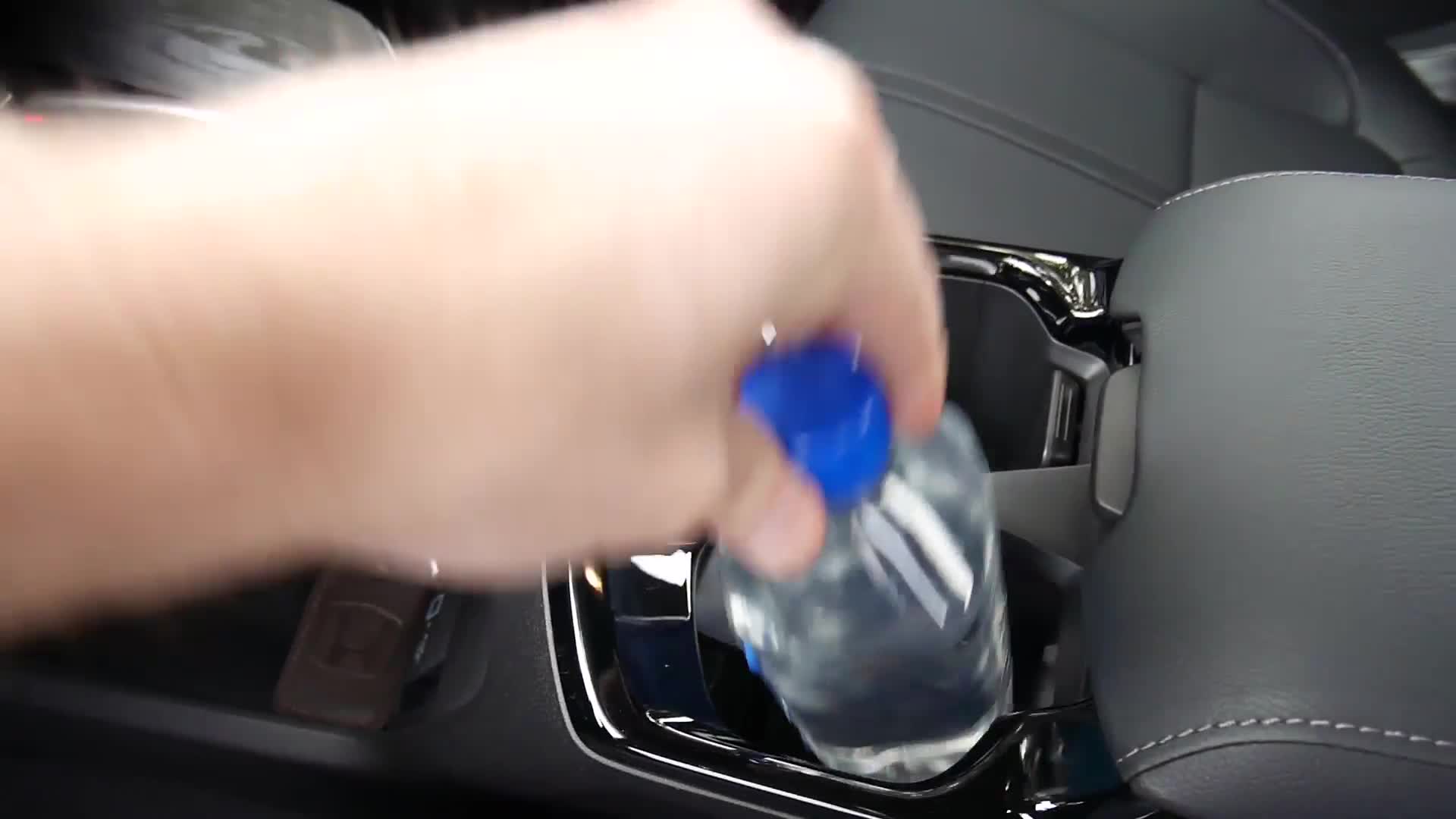 Like other Hondas, the Clarity's front center console impresses with its versatility. The unique cupholders have little tabs that flip up and down to equally accommodate large and small beverages (in this case a Yeti water bottle and a Starbucks tall). Brilliant. The raised "floating" console design also tapers inward to make it easier to access the bin below – in the HR-V and other so-designed cars, it can be tricky to see and grab stuff in what becomes a forgotten cave. One note, though: that bin's bottom is hard plastic, allowing for your phone and whatever else to easily slide around. A rubbery pad would be helpful.

In terms of larger storage, the Clarity Plug-In Hybrid has considerably more trunk space than its hydrogen-powered and all-electric siblings. (Amazing how much space you gain when you reduce battery count and take out a couple of hydrogen tanks.) The resulting 15.5 cubic-feet of space is indicative of a mid-size sedan, and although there's a gradual rise in the aft portion, the trunk itself is quite tall and there's a covered well to store the portable charger and whatever else you'd like to squirrel away. No, it's not a hatchback like the Prius or the Volt, but I'd wager it's just as useful as those for most items – if perhaps even more.

One area of disappointment is tech. Although on paper, the Clarity seems up-to-date for a Honda, it in fact utilizes previous-generation infotainment and safety tech. That means you get the same frustrating, knobless touchscreen found in the Civic, and the same dimwitted, brake-happy adaptive cruise control found in Hondas prior to the current CR-V. Both could be dealbreakers. 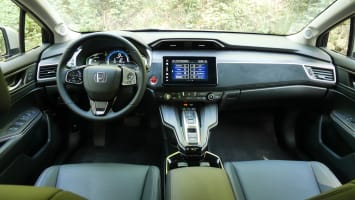 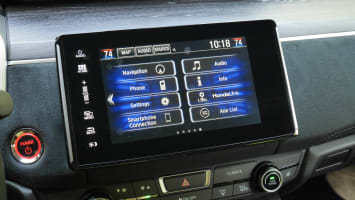 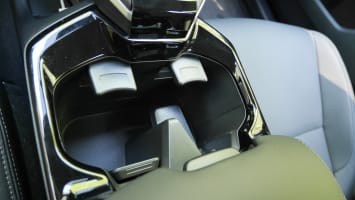 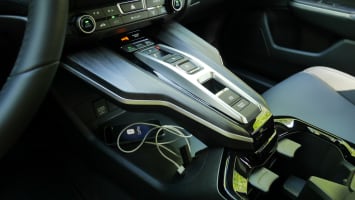 OK, so now, the electric nitty gritty. I managed to go 52.9 miles on a full charge during my 72-mile evaluation drive that consists of some city driving, twisty mountain roads, and rural highway. That beats the EPA's estimate of 48 miles, and given that my driving route doesn't exactly cater to electric cars, color me impressed. I also was NOT using the Clarity's Eco mode, so I theoretically could've done even better. My only other plug-in hybrid data point – the BMW 530e – went only 10.8 miles on electricity alone versus the EPA's estimate of 15.

So, how come the Hyundai and Toyota get better mile-per-gallon-equivalent ratings, yet don't go as far on electricity? The answer, most simply, is that they are more efficient when the all-electric range is exhausted. Theoretically, then, if the Clarity (and Volt's) longer electric range allow you to more frequently drive using electricity alone, you'll spend less money on gas.

Of course, you'll also spend more at the dealer, but as far as the Clarity is concerned, you'll also be getting a car that should cost more. It is bigger, quieter and more refined. When the all-electric range is exhausted, its operation in hybrid mode is impressively not that different. Since the electric motor continues to power the car – the gas engine works as a motor generator, much as it does in the Honda Accord Hybrid – it still feels like an electric car to drive. And, thanks to ample acoustic materials, that engine isn't as noisy and noticeable as those in its competitors. Unless you really gun it, you may not even notice the change-over.

If there is one dynamic beef with this plug-in hybrid it's the lack of one-pedal driving capability, or rather, a heavy regenerative braking setting. Pulling the "shift" paddles activates more aggressive regenerative braking for use on grades, but it immediately shuts off when you apply the throttle. One-pedal driving is one of the best attributes of electrified cars, and it seems like an oversight for the Clarity.

Nevertheless, I'm still quite impressed by the Clarity Plug-In Hybrid and really, of all the Clarities, it's the most relevant. The Electric version taps out at a pathetic 89 miles and the hydrogen Fuel Cell version might as well be powered by dilithium crystals or unicorn dust for the vast majority of people in this country. Therefore, not only is this the strongest Clarity, but it's also one of the strongest and most appealing plug-in hybrids – especially if you care about more than just electric range. 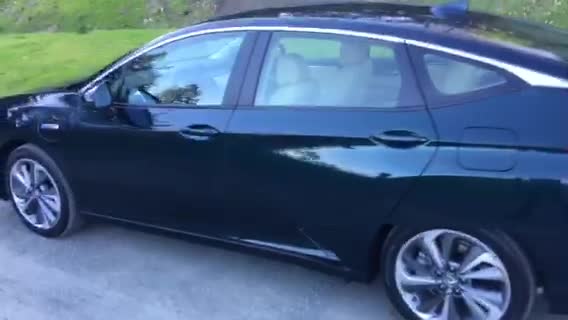 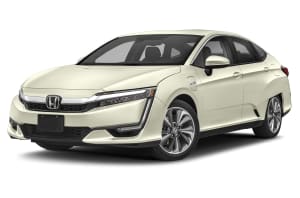