Bronco prices continue to rise and someone bought this one for $291,000

A twist of the key and the world's most expensive Ford Bronco thunders to life inside Icon's 75,000 square foot shop in Chatsworth, California. For a moment the roar of its Coyote V8 drowns out the facility's cacophony of assorted power tools, and then the double-overhead cam 5.0-liter settles into a steady 950 rpm idle. Despite a layer of Dynamat and a thick coating of Line X on the truck's floor, I can feel its Borla exhaust system pulsating beneath my feet.

This is Icon's latest build, and it's a little different than the company's previous efforts. It's Icon's first Old School Edition Bronco, which has a more traditional style than we've seen from the builder in the past. It's mechanically identical to its well-known New School model, but wearing its original painted steel grille, chrome bumpers, and stainless trim instead of all the billet and black. Inside is a period-correct steering wheel, houndstooth upholstery, and classic controls. 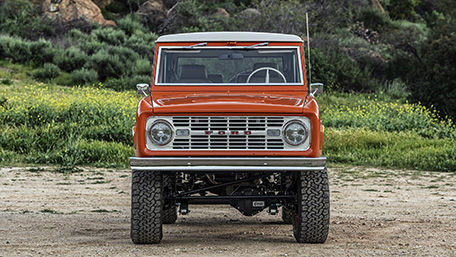 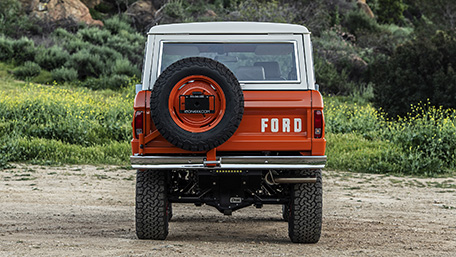 "We wanted to pay homage to the original Bronco and offer something a little less masculine," says Icon's COO Sherif Yassa. "Women have been a small portion of our clientele, but the Old School Edition is raising that drastically."

Half of the trucks it will build this year will be Old School Editions. It has four already in progress, two of which were ordered by women. On top of that, this orange 1966 Bronco recently sold on the online auction site Bring A Trailer for an astounding $291,000. That's believed to be a world record sale for a first-generation Bronco, and ten percent of that purchase price has been donated to the Autotype Emerging Scholarship Program to help young designers expose their work to the world.

Although the truck's new owner has asked to remain anonymous, he has agreed to let us drive his very expensive new toy – before he has. 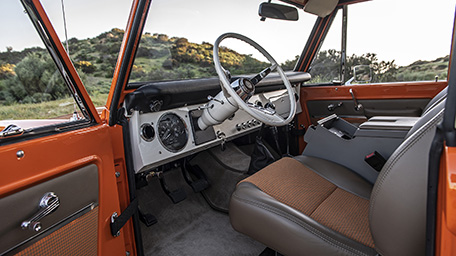 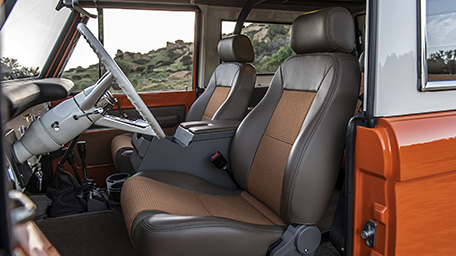 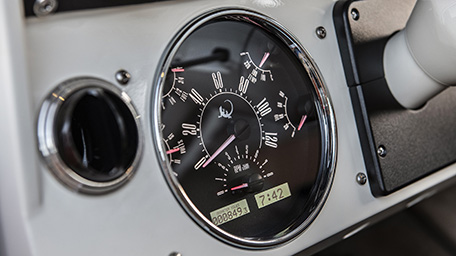 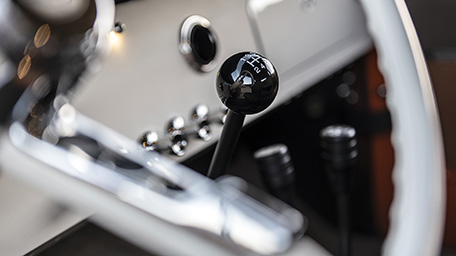 Free from the confines of Icon's shop I turn the orange Bronco north toward the mountains in search of open road. Traffic is light and its 5.0-liter wants to eat. I've driven an Icon Bronco before, and complained about its disappointing acceleration. Its four-speed automatic shifted well enough but seemed to sap a fair amount of the V8's horsepower. But this truck, with its AX-15 5-speed manual and short 4.56 gears, is a completely different driving experience. This Bronco is genuinely fast.

Throttle response is snappy and the truck ready to rock anywhere on the tach. Full throttle pushes you back in the seat as you rip through the gears, the Coyote belching a serious V8 rumble. With this combination the Icon Bronco is part muscle car.

Designed by Aisin, the AX-15 isn't exactly a state of the art gearbox. It was used in Jeeps for a about a decade starting in the late 1980s. We weren't expecting much, but it's perfect for this application and pairs well with the Atlas transfer case. 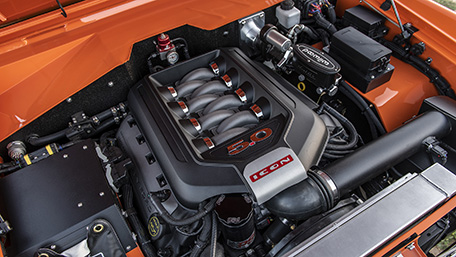 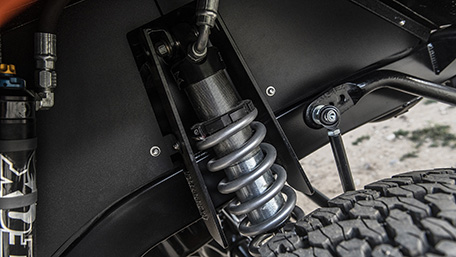 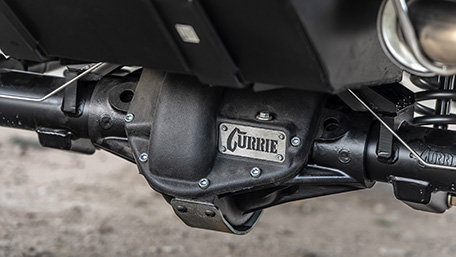 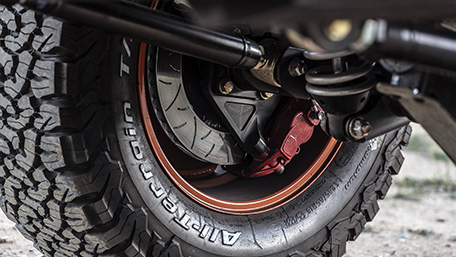 First of all it's robust, with a 23-spline output shaft. It's also geared right for the Icon with a very low 3.83:1 first and a 2.33:1 second gear. Rev it out to seven grand and the Bronco will do over 60 mph in second. Plus, fifth gear is an overdrive, so cruising on the highway at 80 mph is effortless, the 5.0-liter turning just 2500 rpm.

The Icon's hydraulic clutch is light enough for traffic, but feels sturdy and substantial. Shift action is mechanical and a bit heavy. It's all just right for a truck like this, but you don't have to shift much around town. With the V8's 402 lb-ft of torque you can just leave it in third.

Also perfection is the Bronco's long shifter, which is topped with an oversized black ball engraved with a white H-pattern. The Old School Edition also gets a first-generation Mustang steering wheel, a retro-font gauge cluster with a chrome bezel and original looking knobs for the Vintage Air air conditioning, which blows ice cold. Ward has always gotten the details right. That's what Icon is famous for. 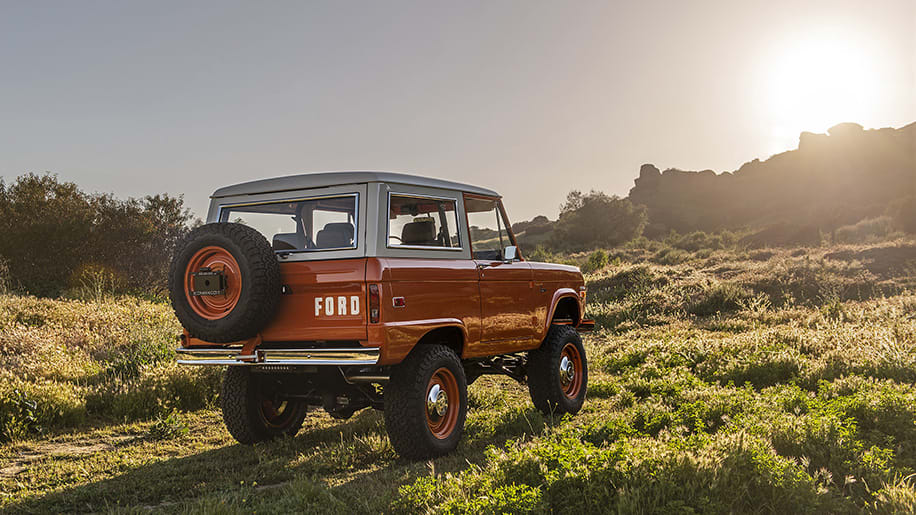 Steering is light and quick with 14.7:1 ratio, but there's a bit more play in the center then there should be. The Icon doesn't ride or steer as well as a new Jeep Wrangler, but it's comfortable enough with very good body control. The remote reservoir coilovers and 285/70R18 BF Goodrich All Terrain T/A KO2 tires soak up the big stuff and there's isn't enough body roll or brake dive to complain about.

We would still prefer smaller wheels and tires, which would lower the Icon's overall height. As it sits the Bronco is nearly seven feet tall and it does feel tippy at first. After a while you get used to it and begin to trust its stability but lowering the trucks center of gravity would go a long way to improving its on road performance. Yassa says smaller diameter wheels aren't an option because of the oversized Brembo brakes.

Regardless of those little gripes, the Old School Edition is the one to get. With its visual simplicity, charming details and all that chrome it's the coolest Bronco Icon has every offered. Ward has always been one step ahead of the market and this is where things are headed. Just make sure you stick with the standard five-speed.