The 2019 Mitsubishi Outlander Sport subcompact crossover may seem like the right type of car for the times, but it falls short in its execution. Brand new tiny crossovers have been popping up left and right from other manufacturers, but the Outlander Sport feels like it's stuck in the past.

If we're looking at it with the glass of water half full, the exterior styling sets itself apart from the rest of the homogeneous little ones out there. It's taut, angular, a little muscular and has some great looking wheel options. Unfortunately, that expressive exterior styling isn't carried over inside. Even in its most expensive form, the entire interior is a black plastic paradise. Powertrain options are a mixed bag with a lot more choices than most other subcompacts provide.

Not much is new for the 2019 model year. SE trim models now have more standard safety equipment, including blind-spot and rear cross-traffic warning. The highest-priced GT trim adds forward collision mitigation, lane departure warning and automatic brights. This Outlander Sport belongs to the first-generation model, which debuted for the 2011 model year. 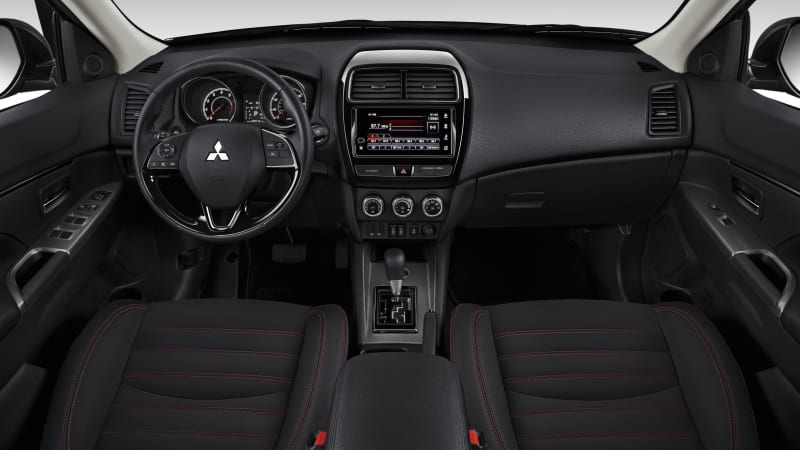 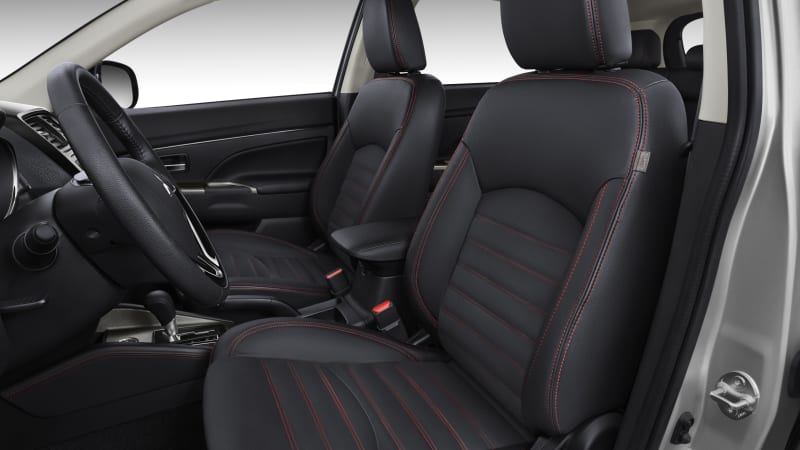 It's difficult to find a more drab and boring interior in a new car today than the Outlander Sport's. Even all the trim and contrasting accents are made of plastic that's hard and unpleasant to touch. Mitsubishi inexplicably put glossy plastic along the inner rim of the steering wheel in the GT model we drove, and it's terrible to hold for longer periods of time. One neat touch is the big "4WD" button sitting in front of the shifter to turn on all-wheel drive. Mitsubishi takes great all-wheel drive seriously (RIP the Evo) so it's nice to see some recognition of the brand's heritage. One other sporting touch found on the GT is the suede inserts on the seats that looked good and make sure you don't slide around.

One thing this crossover has going for it is the tech update it received for the 2018 model year. A 7-inch touchscreen that supports Apple CarPlay and Android Auto is included on the higher trims. Other features like heated seats and an auto-dimming mirror are available, but this is not a high-tech car by any means. 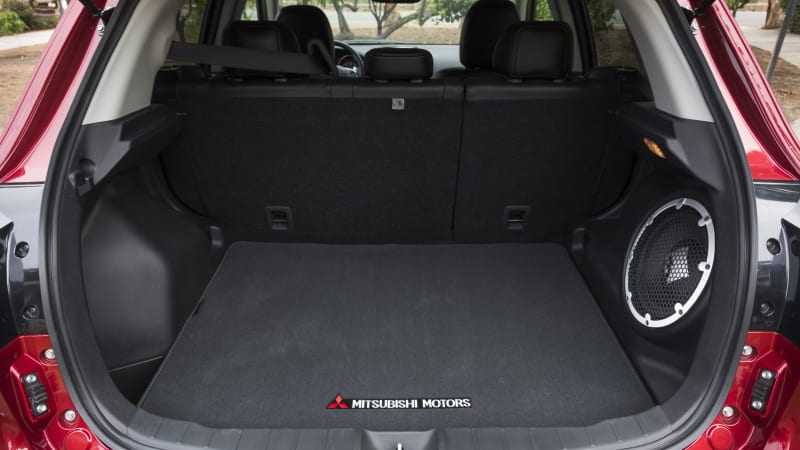 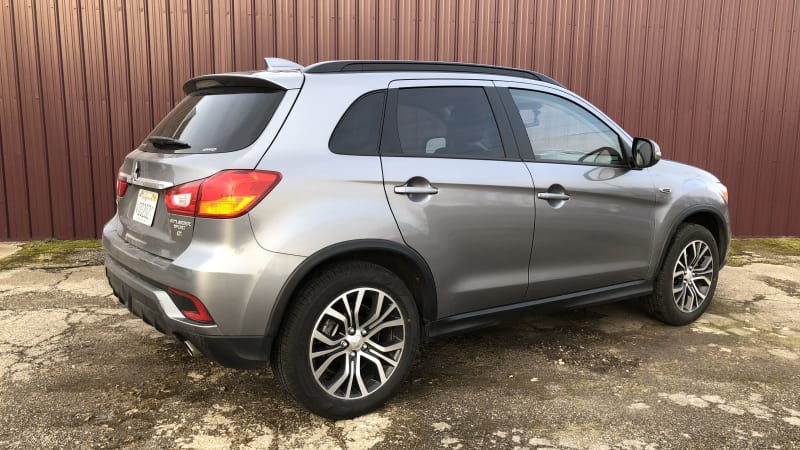 The Mitsubishi Outlander Sport is on the bigger side of subcompact crossovers at 171.9 inches in length. Competitors like the Hyundai Kona, Honda HR-V, Mazda CX-3 and Jeep Renegade are all shorter, but the Subaru Crosstrek is actually a hair longer. Due to the slightly larger dimensions and relatively practical shape, the Outlander Sport has above average cargo space, too. There is 21.7 cu-ft of space behind the back seat (one of the most generous in its segment) and it goes up to a competitive 49.5 cu-ft with the back seat folded.

All that space is generally pretty usable due to the crossover's tall, hatchback profile. The roof doesn't encroach upon the luggage too much, but keep in mind that this is still a small vehicle. We packed the hatch area full with only a weekend's worth of luggage for two people and ended up using the back seat for a backpack that didn't want to fit under the cargo cover.

Performance isn't a strong suit for vehicles in this class, but the Outlander Sport comes through in this category with a couple intriguing powertrain options. For starters, it's one of the only vehicles in its class that still offers a manual transmission in the 2019 model year. This five-speed transmission is only pairable with the base 2.0-liter four-cylinder engine that makes 148 horsepower and 145 pound-feet of torque. A CVT is optional and the most common spec. Maximum fuel economy is achieved with this engine, the CVT and front-wheel drive: an EPA-estimated 24 mpg city, 30 mpg highway and 27 mph combined. Opting for all-wheel drive brings those figures down by 1 mpg each. The manual is rated at 23/29/25 mpg.

Not many manufacturers offer a second powertrain option in this class, but a larger 2.4-liter four-cylinder is available that produces 168 horsepower and 167 pound-feet of torque. Unlike the 2.0-liter, this engine is only paired with the CVT. A front-wheel drive 2.4-liter Outlander Sport gets the same 23/29/25 mpg ratings as the manual, whereas an all-wheel drive model drops down to 23/28/25 mpg. These are some of the worst fuel economy figures in the segment, even if its power output is one of the strongest. 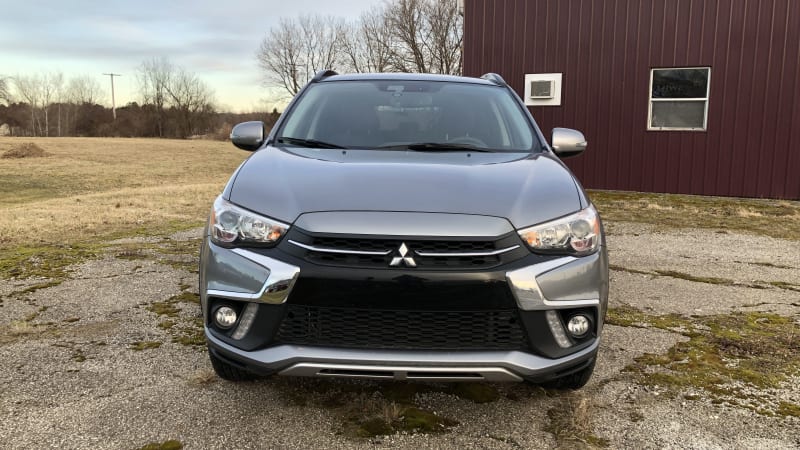 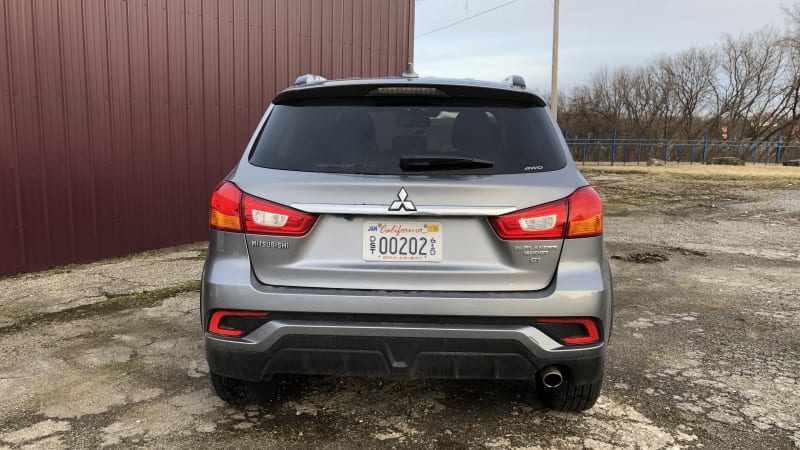 The Outlander Sport looks like it has some potential to be fun from the specs sheet, but it's stale and drab to drive. Acceleration is plenty brisk for a car of its size, but any fun is sucked out of it by the CVT. Unlike newer, more lively CVTs that simulate gear shifts, this one just revs up to redline and hangs out there. The engine sounds stressed, and doesn't produce a rewarding sound when pegged at the top of the tachometer. Even in mundane driving, there's lots of engine droning because of the CVT.

Handling is less than stellar, too. The car drives bigger and heavier than its 3,285 pounds suggests. Ride quality suffers as a result of the short wheelbase, coming off as unnecessarily brittle on the GT trim. Some of that might be curable by fitting wheels smaller than the unnecessarily large 18-inch wheels found on our GT with the 2.4-liter. The shape is easily influenced and buffeted about by strong winds, and fuel economy wasn't the best, either. We got just over 25 mpg in a couple hundred miles of highway driving, which leaves it a few short of our test car's 28 mpg rating.

What more can I read about the Mitsubishi Outlander Sport? 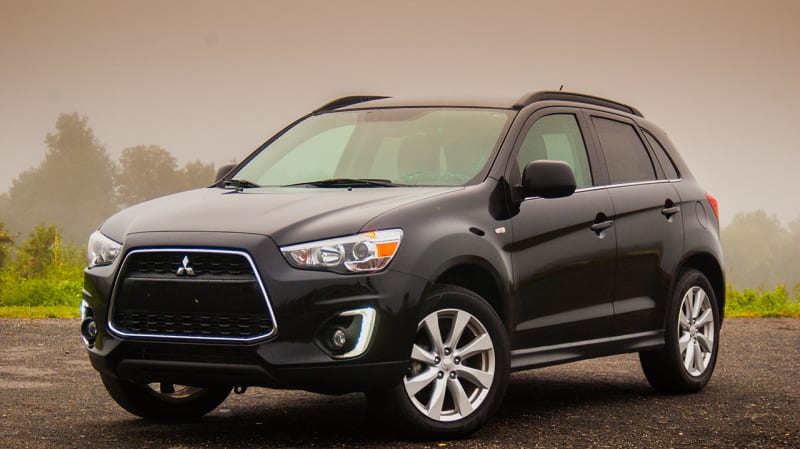 Pricing for the 2019 Mitsubishi Outlander Sport starts with the ES trim level equipped with a manual transmission for $22,040, including the $1,095 destination fee.

Standard features include 18-inch alloy wheels, remote keyless entry, automatic climate control and a 7-inch touchscreen infotainment display. It costs $1,200 more to get the CVT for a final price of $23,240. All-wheel drive is another $1,500 on top of that.

The 2019 Mitsubishi Outlander Sport doesn't make its active safety tech standard, but there's a fair amount available on the SE and GT trim levels. Systems on the SE and GT include blind-spot and rear cross traffic warning. Step up to the GT and you get forward collision warning with pedestrian detection, lane departure warning and automatic brights.

Safety ratings for the Outlander Sport are OK but certainly not the best. It received an overall 4-star crash rating from the government. The Outlander Sport received mostly Good but some Moderate ratings from the Insurance Institute for Highway Safety. It was not awarded a Top Safety Pick, either. 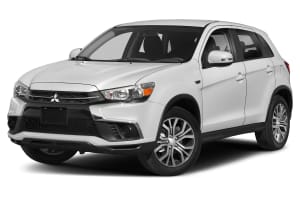