Because Someone Has To Come In Last View All Specs
The Mitsubishi Outlander Sport is not new. It is also not sporty. Despite it all, the Outlander Sport is selling better than ever. Between 3,000 and 5,000 people take one of these crossovers home each month. That's good for Mitsubishi, a company clinging to life in the US market. But the Outlander's sales are a mere blip; that's about a week's worth of handshakes and signatures on Ford Escapes, at best.

Until new product arrives, this is the stuff Mitsubishi has on the ground to sell, and the company has said it's committed to sticking around. That means I got to spend some time recently with a 2015 Outlander Sport SE with AWC (All-Wheel Control – you know, all-wheel drive). There are updates and changes for 2015, including an available 168-horsepower, 2.4-liter engine for ES and GT models, revised CVT, LED running lamps, thicker glass, better sound insulation, and electric power steering. But because I drove an E, I was locked into the 2.0 liter engine. It's the 4B11, a version of the GEMA engine, co-developed with Hyundai and DaimlerChrysler back in the Cretaceous.


The Outlander Sport is an economy car that's been given some new gingerbread to help keep it enticing. At the end of the day, though, it's not competitive with the much newer hardware flooding into the small crossover segment. Mitsubishi's dealer network is small, and the brand's presence is all but non-existent in terms of top-of-mind awareness. Put it all together, and nearly 20 consecutive months of increased sales numbers look like the effects of a recovering economy more than demand for a stellar product. 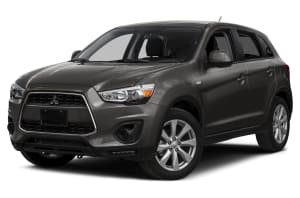