Could the old nameplate return to the U.S.?

Jonathon Ramsey
Know what's crazier than finding out on April 1 that General Motors filed trademark applications for " Cavalier" and " Chevrolet Cavalier?" Finding out that this is the second time GM has done so in 3.5 years. Of course we thought the April 1 report on The Drive was just more horseplay for ignoramuses. But no, on March 27 this year GM besought the U.S. Patent and Trademark Office for both trademarks to apply to "motor land vehicles, namely, automobiles, sport utility vehicles, trucks, vans, engines therefor and structural parts thereof."

And shiver our timbers when we found out GM made the same two requests on Sept. 9, 2015. GM let those first requests lapse before approval, but now the carmaker's back at the same window lodging the same request.

Although you could find the erstwhile U.S.-market Cavalier in every state in the Union from 1982 to 2005, the compact made the Midwest its native habitat. By the time of its demise, the third-generation model sold as a four-door sedan, a coupe, and a two-door convertible. Mostly unloved since its debut, almost always abused and driven into the bedrock, it had its adherents, and just one of the current Facebook enthusiast clubs has a lot more members than we expected.

In 2005, Chevrolet replaced the Cavalier with the Cobalt. In 2016, GM introduced a fourth-generation Cavalier to China. It was slotted below the second-generation Cruze but built on the same platform as the first-generation Cruze (the Ford Escort lives on in China, too, built on an old Focus platform). In 2018, the China-built Cavalier added Mexico as an export market, where it replaced the Sonic.

As GM Authority wrote concerning the 2015 submissions, trademarks must be used in commerce on a product or service to be granted and remain in force. This has everyone, including us, wondering if GM would really bring the Cavalier as a discrete model to the U.S.

To certain people of a certain age, a U.S. Cavalier return is like saying, "What if we brought smallpox back?" But we're sure there are plenty of buyers who'd like an inexpensive compact domestic. The Cruze is dead, the Sonic is seven years old, all the competition's been tied in a sack and thrown in the river. The fourth-gen Cavalier is five inches shorter than the Cruze, on a wheelbase four inches shorter, but about the same width and height.

But why not just keep building the Cruze, you ask? GM said it couldn't sustain the Cruze because sales and U.S. production at the Lordstown plant — which used to build the Cavalier! — didn't add up. If GM could work up "more efficient" Cavalier production, well ... who knows. Or, we could be a new export market for the Chinese car.

That's all speculation. But if a new Cavalier does come back to the U.S., please please please Chevrolet, bring it back in purple. We'll be there at the dock with cassettes of Great White's "Once Bitten Twice Shy" to meet it. 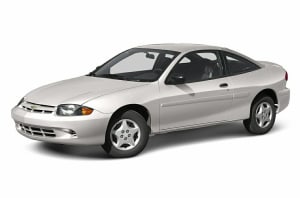