Tony Markovich
The large body-on-frame off-road-capable Kia Borrego died in the United States years ago when it was replaced by the cushy family-friendly Sorento, but it carried on in other markets under the name Mohave. Kia has made minimal changes to the Mohave since then, and it's overdue for a complete overhaul. Kia previewed what that could look like when it unveiled the Mohave Masterpiece Concept at the 2019 Seoul Motor Show.

Kia brought three different concepts to the Seoul show, each with different design languages that could influence future vehicles. We have already seen the Imagine electric sports sedan, which features a smooth body, a slim greenhouse, and a Ninja Turtle-like facemask. Making its global debut, the SP Signature showed a very production-ready-looking compact crossover that is expected to eventually hit showrooms, including in America. It falls in line with many of the current trends, with stacked LED lighting, a two-tone body and roof, and chunky plastic cladding.

The third concept, the Mohave Masterpiece, also made its international debut with yet a different style approach. It shows an evolution of Kia's signature Tiger Nose grille with a massively wide design that integrates a busy lighting pattern and helps shape a muscular fascia and hood.

Kia bills the Masterpiece as a large rugged all-wheel-drive SUV, and it looks the part. Its raised, upright body gives it an imposing presence, and the boxy lines harken to stereotypical off-road SUV design. The rear features a large illuminated MOHAVE nameplate and taillights that mimic the design seen in the headlights. 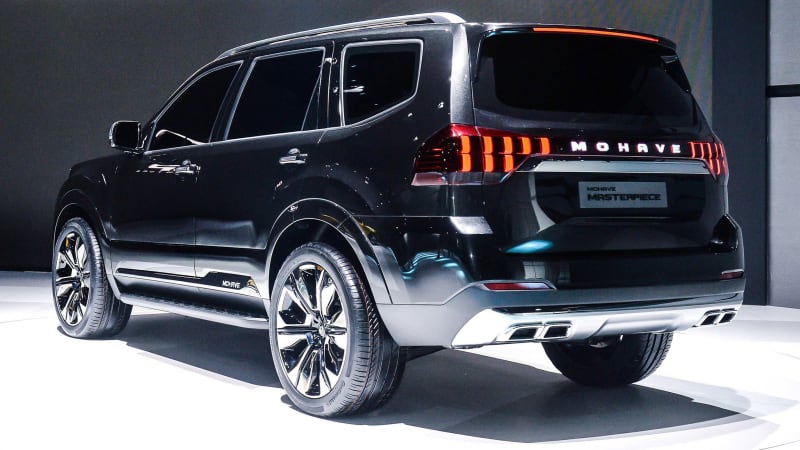 Unfortunately, Kia provided just two photos, and gave no information about the interior or the powertrain. Still, this thing looks properly burly and we're a bit jealous, even after Kia launched the Telluride here in America. Look for production versions of the Mohave and SP Signature to arrive in the near future.