2020 Kia Soul vs. subcompact crossovers: How they compare on paper

The Soul beat the boxes, can it kick the crossovers?

Joel Stocksdale
At 10 years old, the 2020 Kia Soul has entered its third, and potentially best, generation yet. To get here, it fought off other boxy hatchbacks such as the Scion xB and Nissan Cube. But now it faces all new competition: subcompact crossovers. They offer similar sizes, prices and flexibility as the Soul, but with a veneer of ruggedness. But the Soul is ready with its own rugged trim, the X-Line, plus the return of its powerful turbocharged variant. To see how the Soul stacks up to the fresh competition, we've compiled vital stats on all the tall hatches.

Considering the prodigious size of the subcompact crossover segment, we've limited our selection to a few options that are similarly priced and sized to the Soul, and that offer a bit of funky styling. They include the Toyota C-HR, Nissan Kicks, Hyundai Kona and Honda HR-V. There are of course many more options, and you can create your own comparisons using our Compare Cars feature. (You can also check out our Mitsubishi Eclipse Cross comparison that includes a few larger choices). In the meantime, though, check out all the numbers on our selected vehicles in the chart below, followed by analysis after. 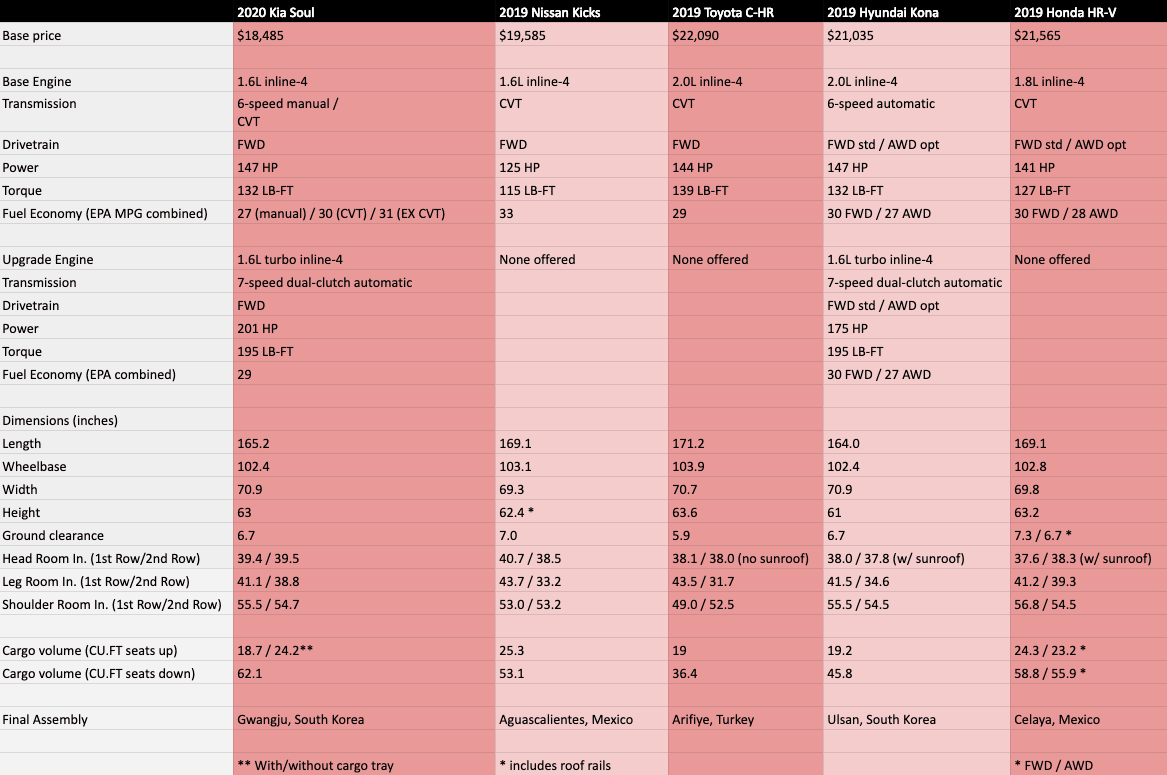 The crossover segment is diverse when it comes to powertrains, with all different displacements, induction systems and drive wheels. A surprising number of these supposedly rugged and off-road-oriented vehicles (at least more than normal cars) are front-drive only. These include the Nissan Kicks, Toyota C-HR and Kia Soul. But the Kona and HR-V offer all-wheel drive, with the Hyundai offering it on both engine options.

Speaking of engine options, only the Kia and Hyundai have two possibilities, either a base 2.0-liter naturally aspirated engine, or a turbocharged 1.6-liter engine. The base engines have identical outputs of 147 horsepower and 132 pound-feet of torque, but the turbo engines differ. The Soul has 201 horsepower to the Hyundai's 175, but both make the same 195 pound-feet of torque.

All of these vehicles send power through CVTs with the exception of the Soul and Kona. The Soul has an available six-speed manual transmission on the 2.0-liter engine, and the 2.0-liter Kona uses a traditional torque converter automatic. Both turbocharged variants also use seven-speed dual-clutch automatic transmissions. Of course the other big reason people like hatchbacks and crossovers is for their practicality. Starting with passenger space, the Nissan Kicks is the king of noggin clearance, just edging out the Soul. The Kicks also offers the most front leg room, followed by the C-HR. But for rear passengers, the Soul and HR-V are the places to stretch out. Broadly built people will also appreciate the shoulder room leaders Soul, Kona and HR-V.

When you need to carry stuff and things, the ultimate winner is the Soul. It's only about one cubic foot behind the Nissan's cargo space behind the rear seats, but has nine more cubic feet with the seats down. With the seats down, the Soul even beats the next most capacious crossover, the HR-V, by about three cubic feet. The C-HR is by far the least capable at carrying cargo, with less space than any other crossover with the seats up and down.

Fuel economy is a practical consideration, too, and the Nissan Kicks wins here at 33 mpg combined. The Kia Soul in EX trim comes in second with 31 mpg combined. The losers at the frugal game are the manual-equipped Soul, and the all-wheel-drive Kona models. 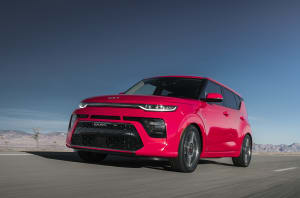 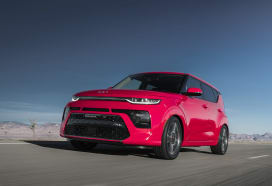 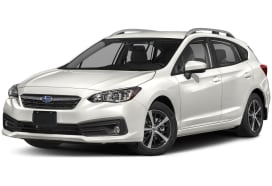 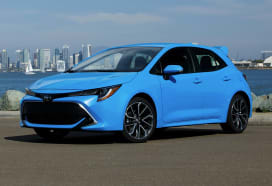