Sure, it costs a little more, but it improves across the board

Add a Review
SAVANNAH, Ga. — Since the model's introduction in 1966, more Toyota Corollas have been sold than any other nameplate in the world. In 2018, the Corolla got a big makeover when Toyota introduced the 2019 Corolla Hatchback as a replacement to the Corolla iM. That was our first promising taste of what was to come from the newest generation. Now, the rest of the Corolla lineup has arrived in sedan form. It's also the first time Toyota is offering a hybrid version of its affordable Everyman's commuter.

Despite sales figures, the Corolla hasn't always been the most exciting. As we've said in the past, "It's basically the official car of people who literally could not care any less about cars or driving." Now, on a new platform, with new powertrain offerings and new technology, that could change. The hatchback showed promise. Perhaps the rest of the lineup can, too. 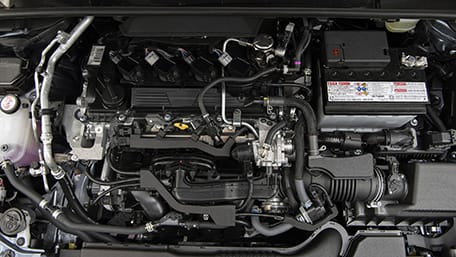 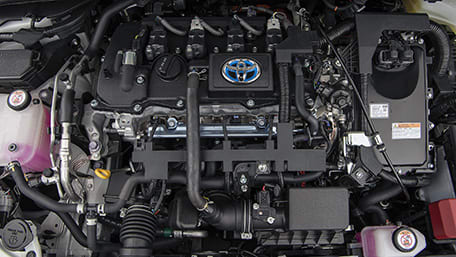 The first Corolla we drove over the course of the day was a Corolla XSE in the new Celestite Grey Metallic paint color. It's powered by Toyota's 2.0-liter Dynamic Force engine, providing 169 horsepower and 151 pound-feet of torque, driving the front wheels via the company's innovative CVT with an actual, traditional first "launch" gear. This new engine is smaller and lighter than before, with a higher compression ratio that helps produce more power while using less fuel. It also achieves a thermal efficiency of 40 percent, which is about as high as we've seen in a production car.

Settling in, I spent some time adjusting the driver seat and steering wheel. At 6 feet tall, no matter what we did, it just didn't feel right — either the steering wheel was too far away, or legs were too bent, and my head was too close to the roof regardless. Eventually I called the seating position good enough and got underway. It wasn't ideal, but I quickly got used to it after a few miles.

Despite the position, the seats were actually quite comfortable, supportive but forgiving of the stuff we carried in our pockets. While driving, I took stock of the interior. The blue stripes on the seat back and cushion of the XSE's "Premium Sport Seats" look a lot nicer in person than in photos. The matching blue stitching throughout the cockpit helps liven up the simple space. From the driver seat, the view is nice, with the rim of our tester's leather steering wheel framing the instrument cluster behind it. From the passenger seat, the view is a bit more drab, with the level, flat dash extending in a black plane of grained plastic. 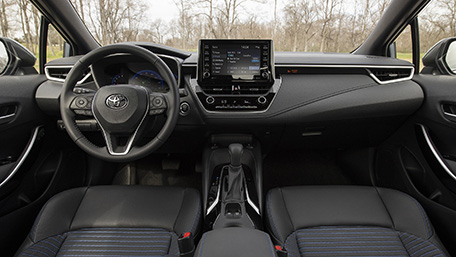 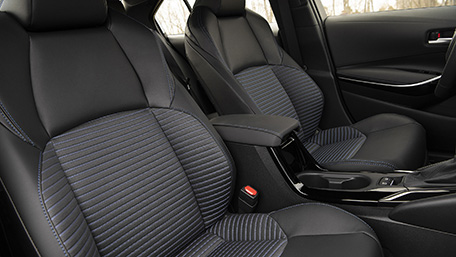 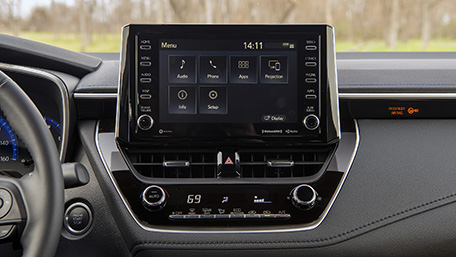 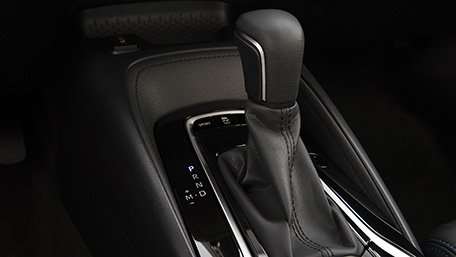 As we took off through the streets of Savannah, the Corolla was mostly unremarkable, as it should be. It's easy and calm to drive. It's not loud or rough. As we got onto more open roads, we found the 2.0-liter engine's extra power to be a welcome improvement over the previous generation's 1.8-liter mill (which still powers the lesser L, LE and XLE trims). It made passing other vehicles on an uphill grade feel more an act of habit than a challenge. While the CVT does cause the engine to get groany when pushed, using the paddle shifters to simulate shifts helps to avoid that, if you care enough to make the extra effort.

Later in the day, we had the opportunity drive the sole do-it-yourself transmission on hand at the event. The six-speed manual is available in the SE trim, and it adds a layer of engagement to the drive, providing the satisfaction of a well-timed downshift and the ability to play more directly with the motor. When allowed to run up through the revs, the 2.0-liter engine actually sounds nice. The clutch took a little getting used to, as the take-up point was high and late in the pedal's travel, but not to the point of being cumbersome. As we played with the transmission and loaded up the new suspension in some of the few corners we found, we noticed we were actually having fun. In a Corolla.

The SE manual also has a little button labeled "iMT," or "Intelligent Manual Transmission" — Toyota-speak for a suite of trick features. There's automatic rev-matching and a feature that helps prevent stalling by providing a little more engine torque if you're too quick to let off the clutch and the car is in danger of stalling. The rev matching works seamlessly in traffic, but we'll have to get back to you about the stalling part. Seeing as the Corolla will be many a driver's first car, this could certainly be helpful for folks just learning to drive stick. 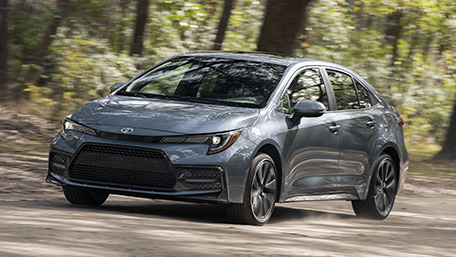 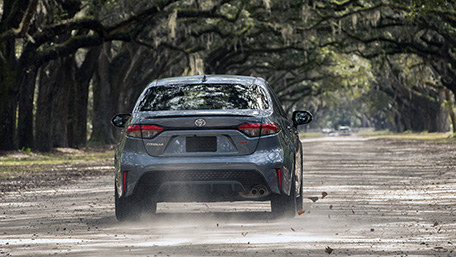 For 2020, Toyota also improved the Corolla's suspension, replacing the torsion beam with a multi-link setup in the rear. When we put the car through some brisk corners, it felt sturdy and stable, not soft or wallowy. The ride is comfortable, too — smooth with a nice amount of tautness to give a feel for the shape of the road without transmitting every little bump into the cabin.

A great selling point for the new Corolla is the amount of technology that comes standard (including the Hybrid). They all get Toyota Safety Sense 2.0, which includes a pre-collision system that detects pedestrians day or night, and daytime cyclist detection. Also standard is lane tracing assist and a lane departure warning system complete with steering assist and road edge detection. Likewise, "Active Cornering Assist" is standard on every Corolla, which uses the brake system to maintain grip and fight understeer. Every Corolla gets automatic high beams, as well as a road sign assist that recognizes stop, yield, do not enter and speed-limit signs, and display them on the instrument cluster. The safety suite also includes adaptive radar cruise control, which covers the entire range of speeds in all CVT-equipped cars.

For the 2020 model year, Corolla gets its first hybrid option. As you'd expect, the powertrain is borrowed from the Prius. It's a 1.8-liter four-cylinder engine with a 53-kW electric motor for a sidekick. It uses nickel-metal hydride chemistry in its batteries, like the Prius AWD-e, which are typically larger than lithium-ion packs but are cheaper and tolerate extreme temperatures better. Together, the powertrain produces 121 horsepower, and helps the Corolla Hybrid achieve an EPA rating of 53 mpg city / 52 highway. As such, the Corolla provides a nice alternative for the driver who wants easy economy, but doesn't like the look of the Prius. The Corolla Hybrid is available in the LE trim, with a starting price of $23,880. Our condolences if you liked the Prius C, though — it is being discontinued with the introduction of the Corolla Hybrid. 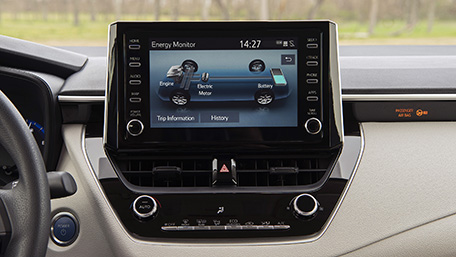 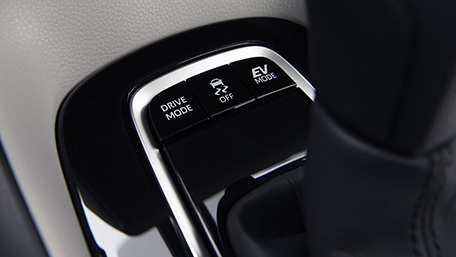 Our Corolla Hybrid tester was a "Blizzard Pearl" white, with a cream interior. From the outside, it looks nearly identical to the standard Corolla apart from badging, though those with a keen eye might notice the smaller 15-inch wheels. The interior is similar, too, but we were immediately struck with how much cheaper it looks in this lighter interior color. The black hides the artificial-looking texture of the plastic, but the cream color amplifies it.

The Corolla Hybrid is impressively quiet, with a little tire noise and a faint engine rumble under acceleration. But most of the time it was hard to tell whether the engine was running without looking at the display.

The Corolla Hybrid has a number of driving modes: Eco, Normal, Power and an EV mode, all selected via buttons above the gear lever. You can also move the gear selector to "B" to add in a little more regen feel. While Eco mode has you feeling a bit like you're driving through molasses, Power really allows you to forget this isn't just your ordinary Corolla. Though rated at 52 combined mpg, we saw an indicated average of about 60 mpg, and found it hard to do worse than the EPA rating in our time in the car. 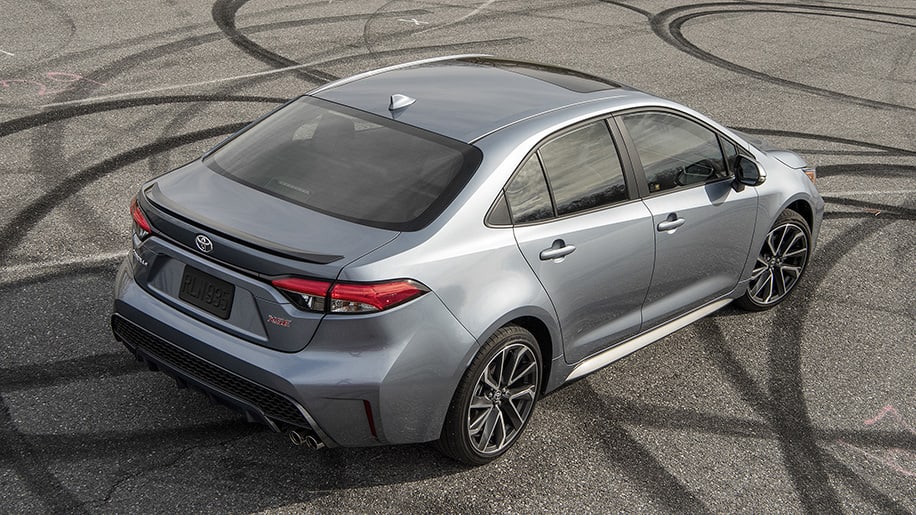 Toyota is raising the price for the Corolla a bit, with a base starting price of $20,430 for the L trim level, up $800 from the year prior, which is apparently what you pay for a car that looks better, drives better and has improved technology over the previous generation — this Corolla includes wi-fi, Apple CarPlay and Amazon Alexa compatibility as standard. Our time in the Corolla was mostly spent in cars with the newly offered 2.0-liter: the SE ($22,880 with CVT, or $23,580 with the manual transmission) and the XSE ($26,380).

While we liked the look of the higher-trim Corollas' interiors better, as well as the extra power and manual transmission option, we'd find it extremely difficult to opt for that over the Corolla Hybrid, simply because it's so efficient. Especially when the buy-in is easily under $25,000 out the door, the Corolla Hybrid becomes very compelling. Plus, again, it doesn't look like a Prius.


Throughout the day, we found ourselves checking out the spec sheets, and always being surprised by the price. The Corolla may not be our favorite non-hybrid car to drive in this price range — that would probably go to the VW Golf, Mazda3 or maybe even the Honda Civic. That said, Toyota's offering moves closer to the top of the pack with this well-rounded sedan. For those who care about standard safety equipment at a low price, the Corolla is a worthy choice. It's not the enthusiast's choice, but it's closer to it than ever before. For everyone else, it's a smart buy. Toyota has done a lot to make the new Corolla safe, comfortable and convenient, without straining your wallet from dealer to crusher.

And for those who want a no-fuss hybrid powertrain for an affordable price, the Corolla Hybrid is a winning prospect. It's superior to the Prius C it replaces in terms of content, quality and drivability. While we still like the Hyundai Ioniq Hybrid in this segment for its 58 combined mpg rating, the Corolla is more refined, with more standard content. We're glad to see Toyota inject some serious, mainstream competition into the compact hybrid segment. And with the Corolla nameplate, this hybrid is bound to sell. 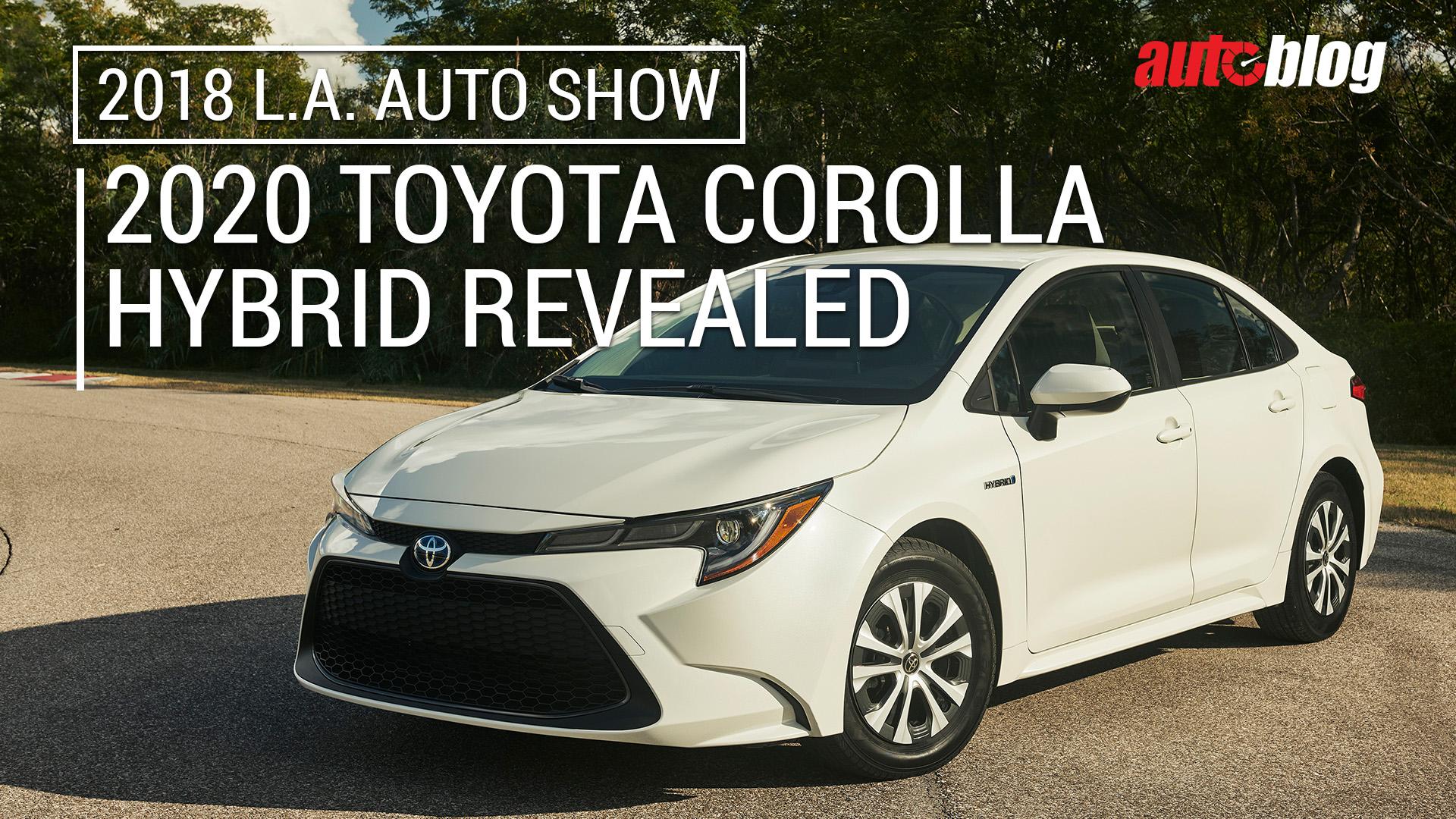 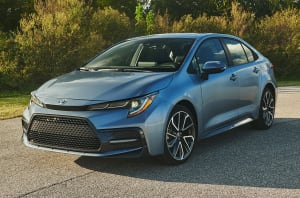 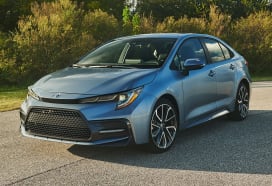 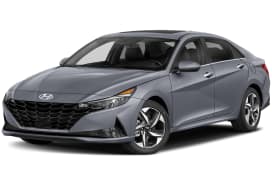