Not a hot hatch, but an enjoyable – even fun – commuter

The gold Corolla. You know the one: missing three of its wheel covers, hasn't been washed in a decade, bumper damage assured. It's basically the official car of people who literally could not care any less about cars or driving. This is mentioned because we got stuck behind one during the 2019 Toyota Corolla Hatchback first drive, and it was about a mile before it sunk in that the two vehicles actually shared a name and common lineage — it was inconceivable. The car we were driving was painted a Polestar-like "Blue Flame," wore 18-inch wheels and had impressed with its composure and driver involvement. The bumpers remained unscathed.

This new Corolla could actually be owned by someone who cares about cars and driving. Perhaps not as their top priority in life or behind the wheel, but there's also enough here in terms of style, character and driver engagement to actually put the 2019 Corolla on the map for those with more discerning compact-car tastes. And, moving beyond comparisons to that gold Corolla currently parked 23 inches from the curb across the street, the latest version is also a definite improvement over its immediate predecessor and showcases what we can expect when its sedan sibling arrives in the not-so-distant future. ( Here's a comparison with the Corolla iM and other compact hatchbacks.)

To be clear, this Corolla Hatchback is indeed an all-new car on the same TNGA platform that underpins the Prius, Camry and Avalon in various guises, plus whatever else comes down the front-drive Toyota pipeline. Exterior dimensions are a smidge greater in some areas, less in others. 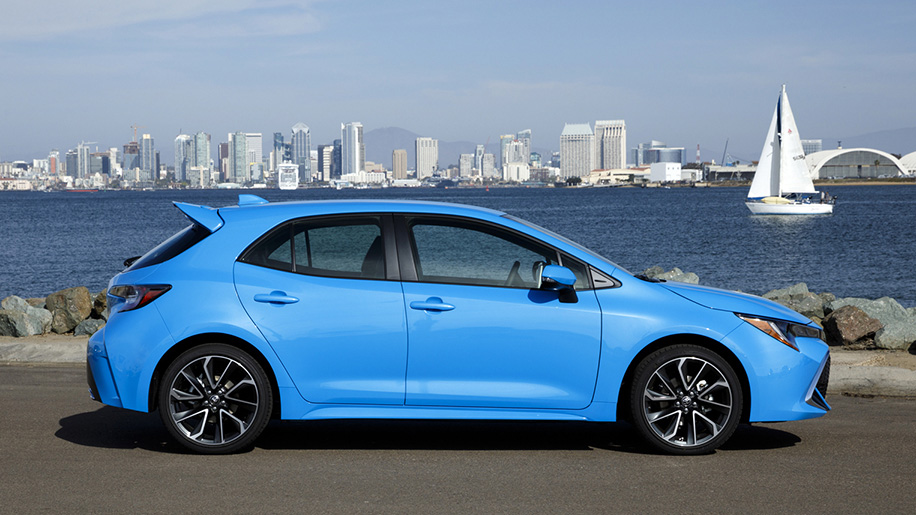 Toyota didn't release full interior specs, most notably legroom figures, but there has been a reduction in headroom (not really a problem, at 6-foot-3 I was fine both in front and back) and in cargo capacity. The latter might be the new Corolla Hatchback's primary demerit, because at 18.1 cubic feet, it's not only smaller than the Corolla iM's unremarkable cargo area (20.8), but less than the Honda Civic (25.7) and Mazda 3 (20.2). There's so little space above the cargo cover that this is likely one of the least utilitarian hatchbacks.

At least it looks quite snazzy. Check out the below video for the SE and XSE trim's visual differences, but regardless of trim, the grille is better integrated into the car's design than on other Toyotas (you know, like this) and there's a tastefully sporty pertness to the rear that evokes French hot hatches. People seemed to dig it at the New York Auto Show. Well, except the fake trapezoidal exhaust outlets. Those are extremely lame, but in totality, this is a pretty cool compact car. And it's called Corolla. How about that?

Great, but how is it to drive? Well, for starters, the transmissions are pretty cool. The standard six-speed manual is the first car in its segment to feature rev-matched downshifting. As in a Corvette or 370Z, it'll make you seem like a slick-shifting driving god, but even if you're an honest do-it-yourself type, the Corolla doesn't suffer from the ultra-light flywheel that can make certain Japanese cars a bit difficult to drive smoothly. Its pedals are also a bit closer together for heel-toeing than those in the Civic. The shifter itself is light in effort and direct in its motion. It's all very good. 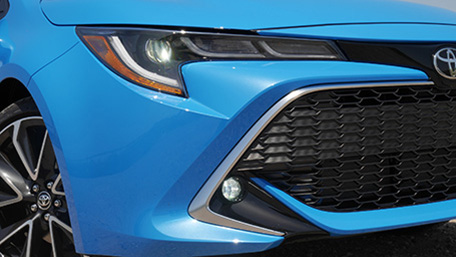 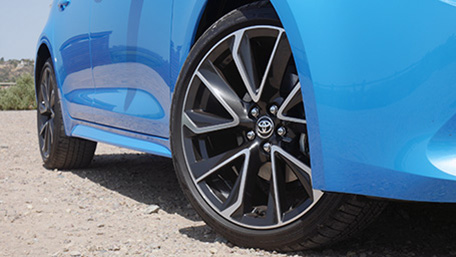 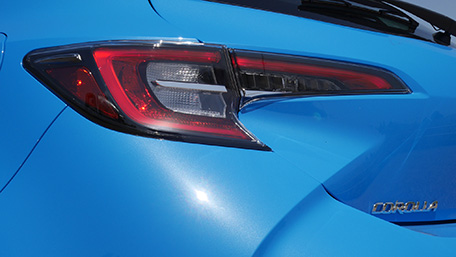 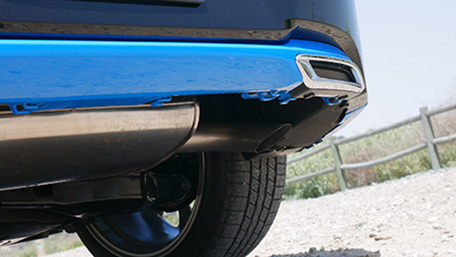 So too, quite surprisingly, is the optional CVT that not only mimics the fixed ratios of a normal automatic (nothing new, the current Corolla does that), but it has a literal first gear. As in there's a cog in the transmission that handles acceleration from a stop before seamlessly turning things over (up to around 25 mph) to the CVT belt. According to chief engineer Yoshiki Konishi, a traditional automatic transmission is more efficient from a stop than a CVT, which is in turn more efficient the rest of the time. We couldn't detect any trace of the switchover.

From there, the 10 fixed ratios adequately simulate a typical automatic under-hood. There's a bit more slurring between shifts, but nothing objectionable. Plus, Konishi says that the ratios are actually different in normal and Sport mode, meaning that the Corolla, in a very broadly defined way, offers its driver a choice of two 10-speed automatic transmissions and, given the standard manual shift paddles, one 10-speed automated manual, too. Its "shifts" are pulled off with lightning-quick immediacy, the result of that first gear also allowing for a smaller CVT belt to be used. Even if you're a manual-or-nothing kind of person, this is some pretty neat stuff here.

The engine is new as well, displacing 2.0-liters and putting out 168 horsepower and 151 pound-feet of torque. The current 137-hp Corolla, be it iM or sedan, is slow, and you don't need 0-60 times to know it. The new one certainly won't be threatening the turbocharged Honda Civic or Volkswagen Golf, but it's now sufficient and perfectly competitive given that the segment's other base engines typically have less power. And should you want more, Toyota is "gauging interest" for a sportier Corolla GR model. Its engineers would clearly like to be given that challenge. 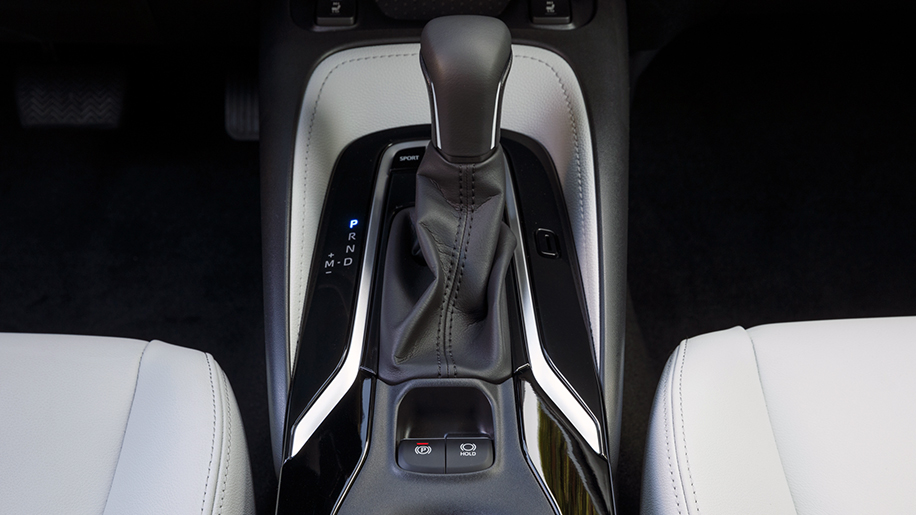 As for the rest of the dynamic package, the new TNGA platform has yielded a stiffer, lighter structure. The suspension once again features MacPherson struts up front and a multi-link rear with stabilizer bar, but the geometry has been altered, the shocks and springs updated, and some componentry relocated. The net result is a suspension that feels spot-on for this segment, imparting a responsive overall feel and a playful nature. The steering is well-connected, appropriately weighted and provides enough feedback. This is a Corolla that actually encourages you to have some fun, whereas the current sedan sadly sags its shoulders and wonders what it did to deserve this kind of treatment.

This is not a hot hatch, though, so don't expect it to be. The Mazda 3 and Honda Civic could still bring more zing to your daily drive. The 2019 Corolla is just a more balanced package now. It still impressively soaked up poor pavement around San Diego despite the XSE wearing 18-inch wheels. The SE and its 16's weren't notably suppler. It really is a well-damped ride, and if it's too firm and exciting for the gold Corolla crowd, oh well.

At least the cabin should have more of a universal appeal. Besides the liberally applied SofTex synthetic leather and cross stitching, other materials are nicely textured, and Toyota's latest switchgear looks and feels top dollar. It's also worth noting that the XSE has real leather, in either black or a stain-attracting, but way-cool white accented by a rich gray fabric.

The interior itself is pleasingly minimalist for a Toyota. It's also less upright and confining than the current Corolla's design. The focal point is the standard 8-inch touchscreen bordered by actual shortcut buttons and volume/tuning knobs. It's Toyota's latest Entune 3.0 system, complete with Apple CarPlay, and it works quite well. Given that the Civic and Mazda 3 systems can frustrate, the new Corolla should have a leg-up for both tech enthusiasts and those who just want an easy-to-use radio. 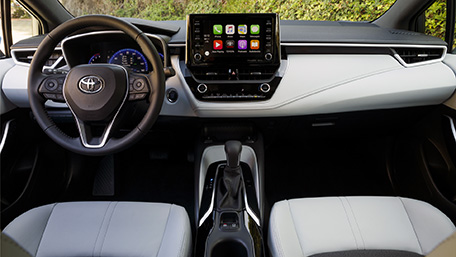 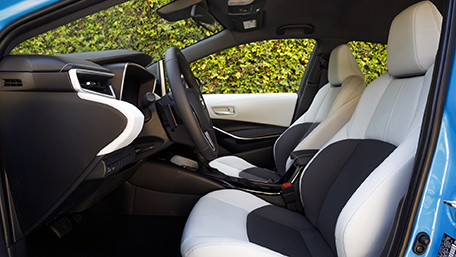 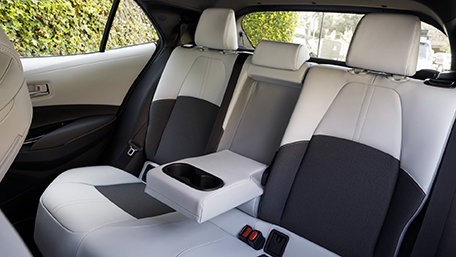 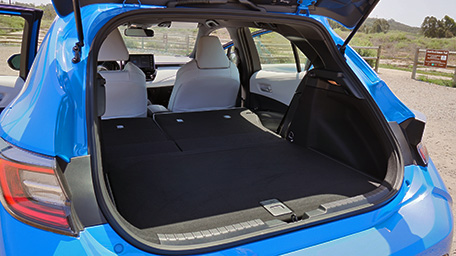 Other noteworthy standard features include two USB ports and WiFi capability, while the XSE adds a part-digital gauge cluster, a JBL audio system and an eight-way power driver seat that provides more than enough adjustability for even tall drivers. Actually, the SE's manually adjustable six-way seat was sufficient as well, providing notably more under-thigh support than the current Corolla does. The seats' lateral support is quite good as well.

A full suite of accident avoidance tech is also standard, and the 2019 Corolla is the first Toyota to get increased speed reduction for the automatic braking system, bicycle detection, and a lane-keeping assist system (Lane Tracing Assist) that factors in the movement of the vehicle ahead should lane markers disappear. Full-speed adaptive cruise control with stop-and-go capability is included on CVT models, while the manual's ACC will shut itself off around 15 mph. That's understandable, but curiously, you can't get blind-spot warning or Lane Tracing Assist with the manual (or wireless smartphone charging). That's because of a packaging decision, not a technical hindrance. Odd.

As for how many may choose the manual, the current Corolla iM has a 5 percent take. That's typically dismal, but it's a Corolla iM. Are you surprised? Perhaps a better data set is that of the Honda Civic. A surprising 20 percent of Civics sold last year were hatchbacks, and of those, a significant (and exciting) 12 percent were manuals. That could signal a slight and welcome change in buyer tastes, which could certainly bode well for the 2019 Toyota Corolla Hatchback. It may not be the hot hatch some hope for, but we'd say it looks better than the Civic, involves its driver to a comparable degree, and deserves to be taken seriously. And, for the record, you can't get it in gold. There is a bronze, however. May want to avoid that one. 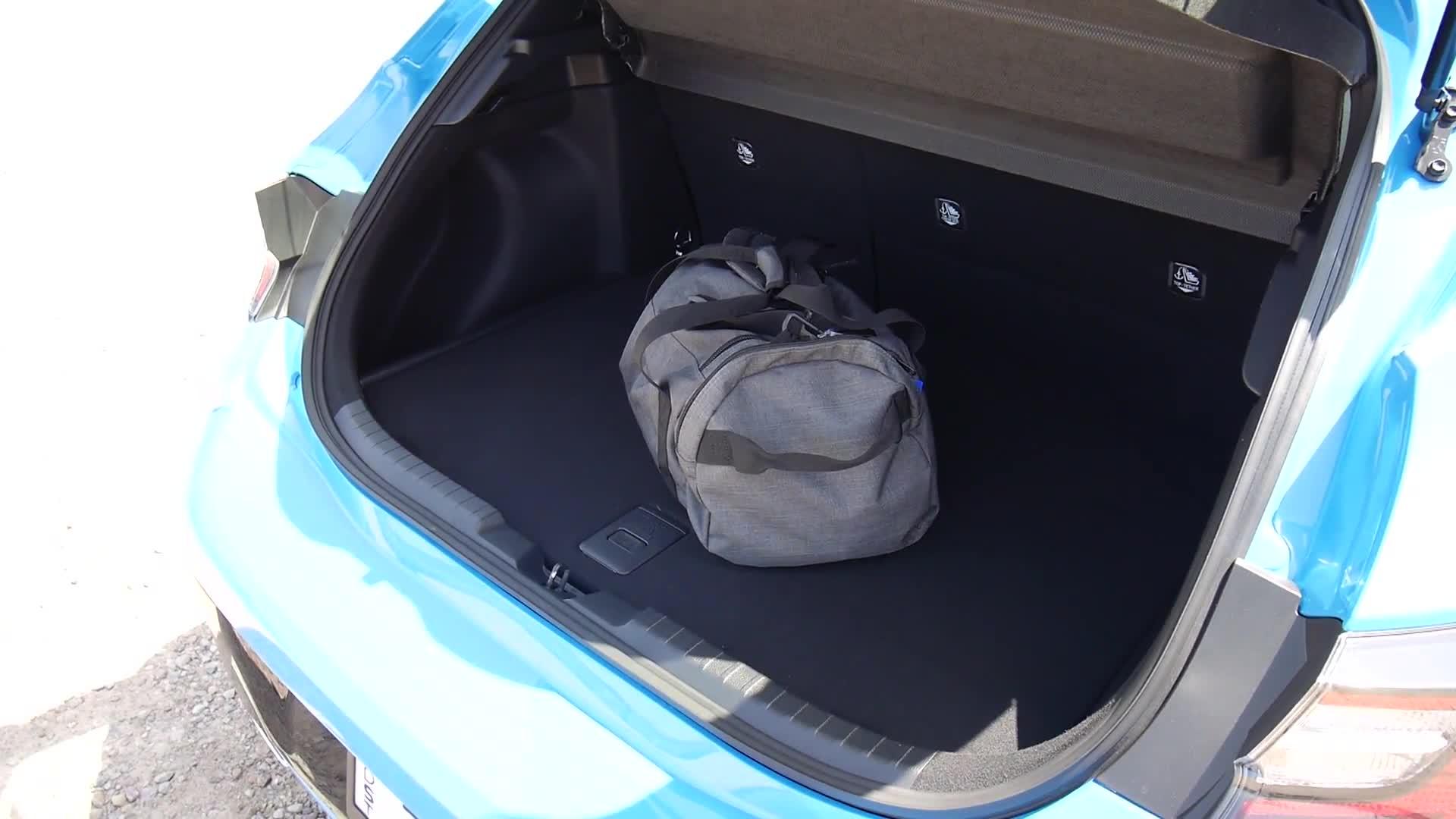