The baby Prius hatchback has been sold since 2012

Antti Kautonen
The Toyota Prius c is in its last days. Toyota has confirmed to Autoblog that its smallest and cheapest hybrid, on sale since 2012, will be leaving the line-up to make way for the slightly larger and more frugal 2020 Toyota Corolla Hybrid.

A Toyota spokesperson confirmed earlier reports and added that 2019 Prius c stock is already limited, with approximately 700 left in stock. "The transition to Corolla Hybrid (should be) in the next couple of months." Toyota had already reduced the number of Prius c trim levels for 2019.

While it makes sense in theory that one Toyota hybrid will replace another, the Corolla Hybrid is a much different vehicle than the Prius c, and in fact, much closer in size and refinement to the regular Prius. Assuming pricing isn't considerably lower, Toyota will be selling two vehicles that are awfully similar on paper. In person, they'll be very different in style as well as body style, so perhaps that's enough justification for Toyota hybrid buyers. The negative reaction to the current Prius' styling could certainly play a role in the decision to provide a more conventionally styled Prius alternative. 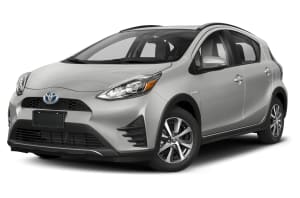