Don’t be shy. You won’t look smug (or confused) in these hybrids. The Ioniq is a green car for the masses. Excellent efficiency, useful technology and safety are all bundled into an affordable and approachable package. It's not completely boring to drive, either.

8
View All Specs
The Ioniq is Hyundai's "golden medal project," conceived from the outset as a car to beat the Toyota Prius and be the most efficient on the market. Ki-Sang Lee, Hyundai's senior vice president in charge of eco R&D, promised that if they could accomplish that feat, he'd give every single engineer on the project a gold medal. The result of their work is an attractive trio – hybrid, plug-in hybrid, and electric – built on the company's first dedicated green vehicle platform. And Lee gave out more than 500 gold medals to his engineers.

With a growing number of drivers – bolstered by Millenials replacing the buying power of baby boomers – who value efficiency and consider the environmental impact of their purchases, hybrids and electric cars should be a popular choice, right? While cheap gas has not helped to encourage people to make the switch to greener vehicles in the last couple years, the added cost and complexity of electrified cars have also been barriers to wider adoption. Hyundai's approach appears solid. The Ioniq hybrids are straightforward, affordable, and something drivers would be proud to own without appearing smug.

So Hyundai has built the car people claim to want, but will the drivers show up at dealerships? 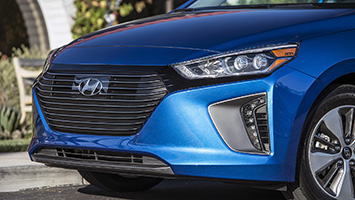 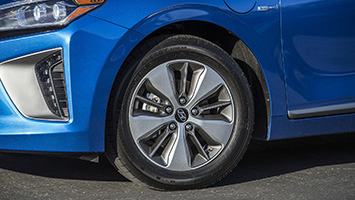 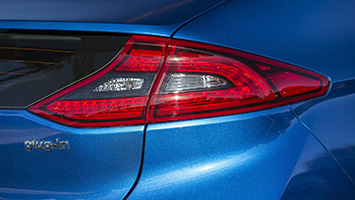 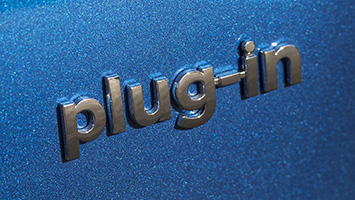 The Ioniq is attractive for a number of reasons, not the least of which is pricing. The Ioniq Hybrid starts at $23,035, undercutting the Toyota Prius by $2,535 (with its base MSRP of $25,570). It's also more efficient, with EPA mpg figures of 57 city/59 highway/58 combined. The most efficient Prius (the Two Eco trim level) falls slightly short at 58 city/53 highway/56 combined. While the Ioniq Plug-In Hybrid doesn't have price or fuel economy figures yet – it doesn't go on sale until the fourth quarter of 2017 – we do know its 8.9-kW battery pack offers over 27 miles of all-electric range and can be topped off in 2.5 hours on a Level 2 charger.

The Ioniq's green cred doesn't stop at its efficient powertrain. Sitting inside the cabin, you wouldn't realize that the soft plastics contain 25 percent sugar cane, or that the headliner and carpet contain about 20 percent of the same renewable plant material. There's no way to tell by look or feel that door trim uses recycled plastics mixed with wood powder and volcanic stone, making it 20 percent lighter. Interior metallic paints use soybean oil to lessen their environmental impact. Even better, it all agrees with the senses. The interior comes together nicely, and doesn't sacrifice a sense of quality or comfort for the sake of eco responsibility or, for that matter, value. These materials would be right at home in the cockpit of a car a class or two up.

From behind the wheel, the Ioniq Hybrid and Plug-In Hybrid are nearly identical in their driving experience, with the PHEV feeling much more akin to its plugless twin than to the all-electric model. They share the same 1.6-liter four-cylinder gasoline engine (with an impressive thermal efficiency of 40 percent), mated to a six-speed dual-clutch transmission. The PHEV has a slightly more powerful 44.5-kW electric motor, compared to the Hybrid's 32 kW. That means the PHEV can rely on the electric motor under more aggressive driving without calling up the gas engine for assistance. 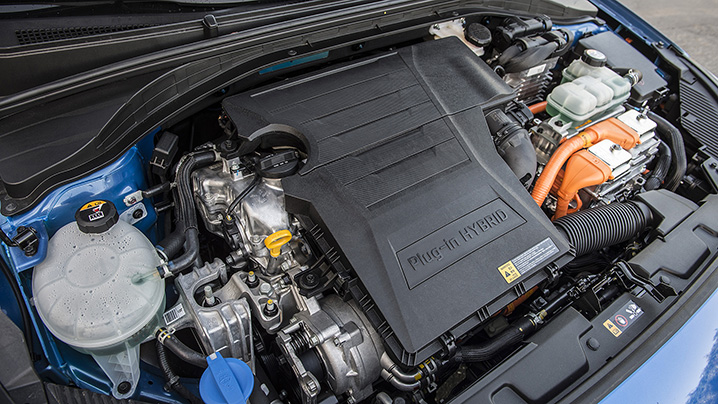 But hybrids are so boring, right? First of all, they're slow. Neither Ioniq hybrid will be winning many drag races, with their 0-60 mph times of a little under 11 seconds. In talking up the Ioniq, Hyundai promised a car that is fun to drive. We were slightly skeptical, though, that something so efficient could be fun too.

Without counting the seconds, the Ioniq Plug-In Hybrid (the first of the cars we sampled) felt plenty quick for everyday driving. There was no problem getting up to merging speed on the highway, and it cruised along pretty effortlessly in Eco mode. Slicing so quietly through the coastal air conjured up the childhood image of sticking a hand out the window of a moving vehicle, angling it to minimize resistance. This car really felt slippery and calm at speed. The smooth, nearly silent ride made it easy to carry on a conversation inside the cabin.

And, at least on the highway, there wasn't much else to do while behind the wheel than just drive and chat. Apparently drawing on wisdom garnered by none other than the US Navy, Hyundai has followed the tried and true principle of " Keep it simple, stupid," when it comes to interfacing with the Hybrid and Plug-In Hybrid. With electrified vehicles, there can be a learning curve for drivers new to the technology. When should I use EV mode? What is the "B" position on the shift lever? What are these leaves growing and disappearing on the instrument cluster? Is this a game? Because it feels like I'm losing. 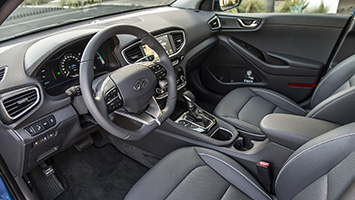 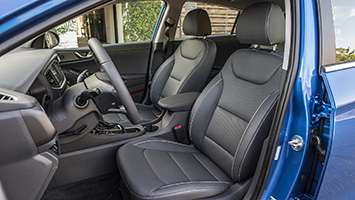 While EV modes, regeneration controls, and gamified coaching techniques are great for the more eager hypermilers out there, a lot of drivers simply won't or don't want to use those, and may even find them intimidating. They just want what's familiar, and to have the "green" part be passive. Hyundai has made both hybrid versions of the Ioniq as straightforward as can be. Neither have regenerative braking controls apart from the left pedal (or by setting the cruise control). The Plug-In Hybrid has a single button next to the shifter that toggles between the (mostly) EV mode and a hybrid mode that will retain more of the charge. The standard Hybrid doesn't even have that. It does all the thinking for you, using the electric motor and gas engine as it sees fit.

In the PHEV, even when the engine kicked in on uphill grades or under heavy acceleration, the sound from the four-cylinder engine was minimal. We were more aware of the vibration coming through the floor than the actual buzz of the engine in our ears, and we found the same to be true when driving the plugless Hybrid. Here's where the average driver will benefit from the six-speed transmission. For many, the drone of a CVT-mated engine under heavy load is a nuisance, something weird and noisy that doesn't fit into their idea of what a car should sound like. The dual-clutch transmission avoids that, and has the benefit of quick, seamless shifts. 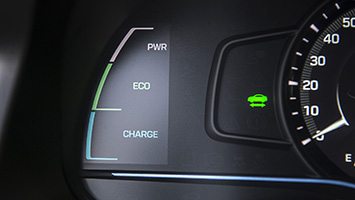 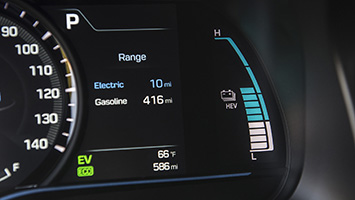 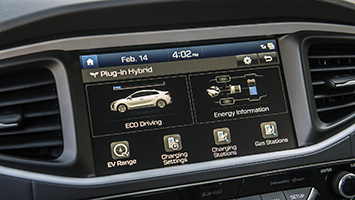 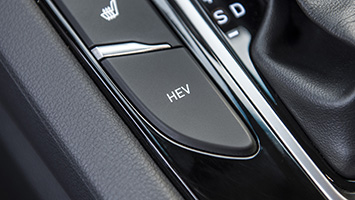 Having proven themselves as dandy little commuters, we also got to drive the pair of Ioniq hybrids in the curvy roads in the hills of Southern California. It was there that we realized Hyundai was right, that the Ioniq could, in fact, be fun to drive. Pushing the shift lever over into sport mode, the central gauge transforms from a speedometer to a tachometer. The gas motor keeps running, throttle response is markedly sharper, and the transmission holds onto gears longer. While the steering retains the same flat, numb feel on center, it weights up progressively as you push the car through the curves.

A confluence of a low center of gravity, tidy proportions, and a well-tuned suspension (McPherson strut front, multi-link in the rear) gives the car a flat, planted feel when sawing it back and forth through a string of turns. The supportive seats also do a fine job of holding the driver in place. When you need to bring the car to a halt, or to set up for the next corner, the brakes feel solid and predictably progressive, slowing the car down smoothly but swiftly. You probably don't want to try to push the limits of the Ioniq with its low-rolling-resistance tires, but the car is willing to play as long as you play nice.

That's right, we actually had fun driving a hybrid that gets better gas mileage than a Prius. 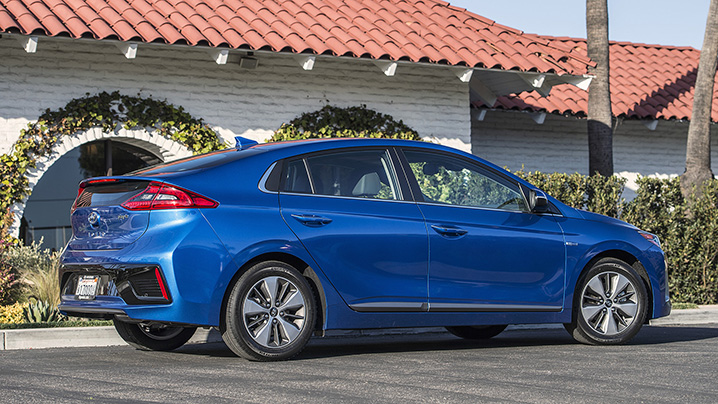 From a driver's standpoint, the differences between the Hybrid and Plug-In Hybrid are few, and mostly insignificant. The road noise was slightly greater with the 17-inch Michelin Primacy MXM4 tires that come on the Limited trim level of the Hybrid. Being able to spend more time in EV mode in the PHEV is certainly nice, too. When the other option is a quiet, naturally aspirated four-cylinder, driving under electric power is more exciting. Especially with the NVH so polished, the silent whooshing is really satisfying. The PHEV's slightly bigger battery means more weight, but an even lower center of gravity, but the difference in the way it feels on the road is nearly imperceptible.

The real contrast would be in living with the car. Do you mind more frequent trips to the pump, or do you prefer to plug in every night? Do you care whether or not you get to choose when you get to use EV mode?

Hyundai ticks a lot of important boxes with the hybrid Ioniqs: price, efficiency, comfort... yes, even fun. They provide a great deal of what the green car market demands. The Toyota Prius has long been the hybrid that people turn to when efficiency matters. Some people find the Prius's styling a bit off (that rear end – woof!), and have a hard time stomaching its (admittedly outdated) reputation as a boring transportation appliance for smug dullards. Now, you can get a perky hybrid from Hyundai that is easy on the eyes, feels super smooth and polished, and will save you even more both at the dealership and at the pump. Will the customers show up? We think they will. 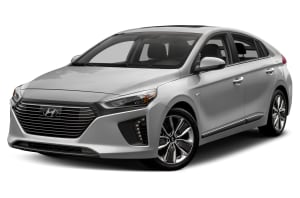