It's not simply a short Honda Pilot – it's more than that View All Specs
MOAB, Utah — The 2019 Honda Passport graces dealer lots on Feb. 4, and we can pinpoint 35,002 reasons for the debutante's arrival. The blatant, bottom-line rationale was that about 35,000 buyers defected from the brand every year because Honda had nothing to serve "adventure-seekers who want ... the more personal and rugged character of a five-passenger SUV." The Honda Pilot looks too much like it has a large family to support, the CR-V looks too much like the central piece in a My First Family Starter Kit.

Watching the population of a small American city abandon the brood every year is awful enough. Beyond that, according to Honda's numbers, the Passport's segment will grow 25 percent in the next five years to about 725,000 vehicles. At the soft-core end, Ford sold 134,122 Edges in the U.S. last year. Among the hardcore set, Toyota rang up 139,694 4Runner sales in 2018. The Jeep Grand Cherokee triggered the "TILT!" sign with 224,908 sales. Numbers of that magnitude cast a tall shadow, and Honda got tired of living in it.

The last reason is that Honda didn't need to drop a billion developing a new vehicle. The automaker already had the core component cut-and-trimmed into the Passport. The recipe for adventure was, take one Pilot, lop 6.2 inches off the rear, and tune it to enjoy tougher terrain. From grille to B-pillar, the Passport and Pilot are fundamentally one vehicle; same 110-inch wheelbase; same powertrain based around the 3.5-liter V6 with 282 horsepower and 262 pound-feet of torque; same updated nine-speed transmission; same tow ratings; same Intelligent Variable Torque Management (iVTM-4) all-wheel-drive system; same Intelligent Traction Management drive modes of Normal, Snow, Sand, and Mud; same Honda Sensing driver assistance suite; same acoustic glass windshield and, in upper trims, acoustic glass side windows. Honda made good on the detailing, though. The Passport sends a wildly different signal than six inches off the back suggests, with the new face and black wheels taking most of the responsibility. Designers straightened the Passport's kinked headlights, carved a squared-off bumper form, and placed fog lamps and turn signals in a pronounced rectangular contour down low. By painting the area black, including the headlight surrounds, designers gave the Passport a vivid, rugged mask. The black, 20-inch wheels on our Elite trim tester, and 0.8-inch higher ride height compared to the Pilot, reinforce the impression that it is one determined-looking crossover. 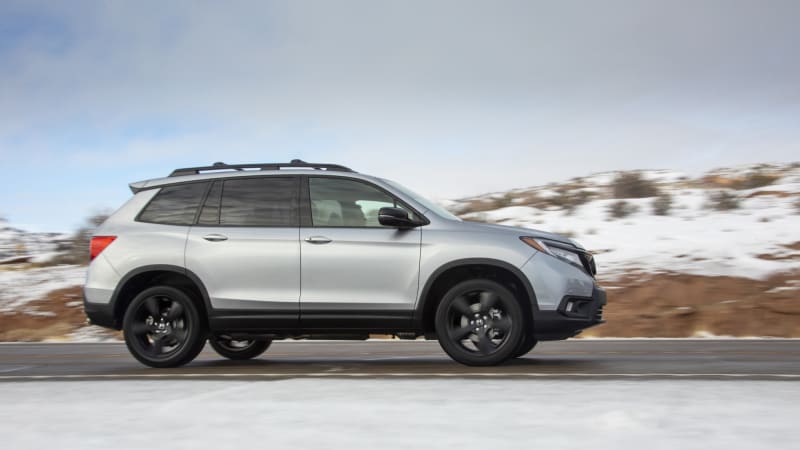 In back, the Passport omits the Pilot's tailgate-mounted taillight section. A black wing motif across the tailgate echoes the corporate grille, and emphasizes width. The bumper includes a scooped-out handhold for the tailgate, above a thick black bumper embossed with angular shapes.

A couple more modifications enhance the Passport's stance. On AWD models, the track widens by 0.4 inches compared to the Pilot, and the Passport AWD wears 265/40 R20 Continental CrossContact tires, which are 20 millimeters wider than any Pilot tire. On 2WD Passports, track widens by 0.7 inches, with the same 245/50-section hoops as on an AWD Pilot.

If you've seen the first two rows of the Pilot interior, you've seen the Passport interior. The Passport's steering wheel adopts perforated leather at 10 and 2 o'clock, and the rear compartment gains 1.2 inches of legroom by going without the Pilot's third-row seating. 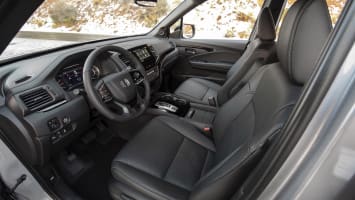 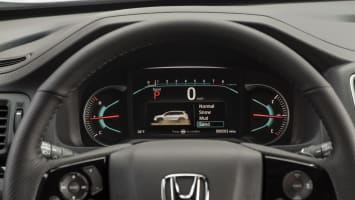 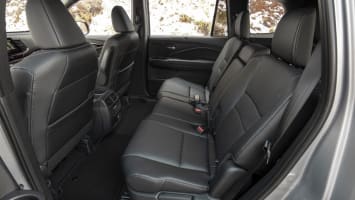 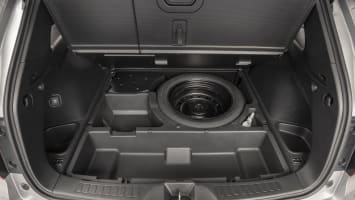 Behind the Passport's second row, designers extracted all the functionality they could. With the rear seats up, the mid-sizer swallows 41.2 cubic feet of gear. Press the button in the load area to put the rear seats down, and it reveals 77.7 cubic feet of void. Those numbers include the 2.5 cu.-ft. of storage under the floor, scooped out around the space-saver spare. They represent a little more area than is available in the Ford Edge, appreciably more than in the Jeep Grand Cherokee, and appreciably less than in the Toyota 4Runner.

Since almost all adventure vehicles spend almost all their time on paved roads, Honda didn't compromise on the urban ride. In our review of the 2019 Pilot, we critiqued the suspension as too soft for the 4,319-pound curb weight of the Elite trim, "causing the body to heave in slow motion like a pirate ship." The Passport, fitted with slightly stiffer springs and weighing 4,237 pounds in Elite spec, has the same reluctance to being hustled around corners as most of its competitors. Nevertheless, active torque vectoring at the iVTM rear differential by way of two clutches works noticeably to get the back end placed so the front end can do its job, and we didn't detect any off-putting roll. Drive it like the crossover it is, and all is well.

All Passports get 20-inch wheels, gray on the middle EX-L and Touring trims or black on the base Sport and top Elite trims. The nicely tuned adaptive dampers keep those large feet from tripping over imperfections and forestall any rollicking inside the cabin. Tiny tweaks like the fractionally faster steering rack — the Pilot's ratio is 16:1, the Passport AWD is 15.76:1 — make the driving experience slightly more stern than in the Pilot. 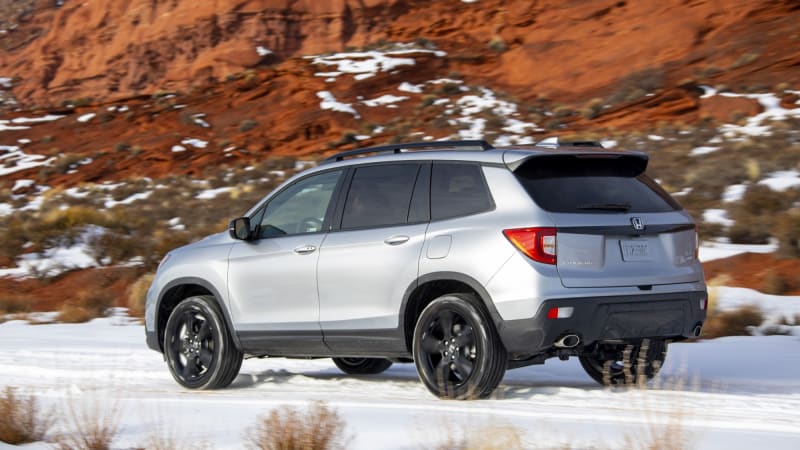 Gas mileage strays from the Pilot by a similar percentage. In 2WD, the Passport returns 20 city, 25 highway, 22 combined. In AWD trim, an owner gets 19 city, 24 highway, and 21 combined. The AWD combined figure is one fewer mile per gallon than in a Honda Pilot, two fewer than in an Edge with the 2.0-liter four-cylinder, and three fewer than in a 2019 Nissan Murano.

With 8.3 inches of ground clearance, the Passport is the tallest Honda, 0.3 inches higher than the Edge, half-inch shy of the Grand Cherokee. Put that to work with a 21.4-degree approach angle, 17.3-degree breakover angle, and 27.6-degree departure angle on the AWD model, and Honda pegs the Passport as its most rugged light truck, surpassing even the Ridgeline.

Off-road, some lengthy excursions into Arches National Monument proved the Passport is surprisingly game to work up a dirty lather the old-fashioned way. The unusual choice of 20-inch wheels on an adventure-focused crossover doesn't interrupt the backroad party. The stiffer springs and adaptive dampers sponge up jittery hardpack, the toughest surface that most Passports will confront. Swapping drive modes when the trail goes mucky loosens throttle and brake inputs, shifting, and slip angles to maintain the driver's edge. 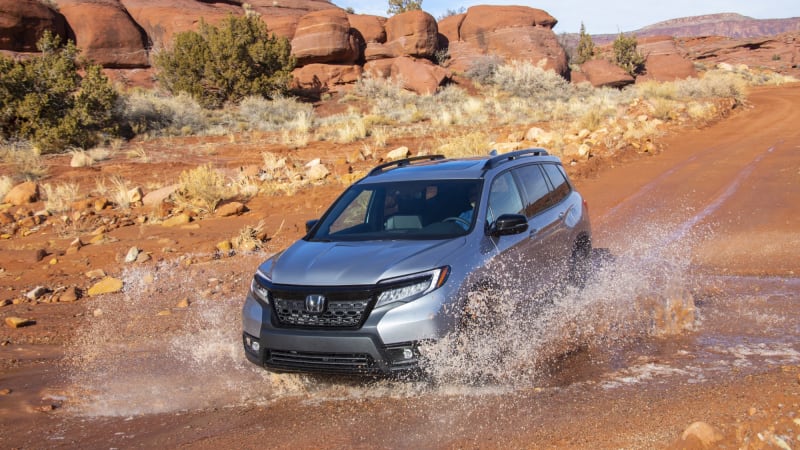 In our First Drive of the 2019 Pilot, we wrote, "any trails with exposed rocks larger than a football will have to be avoided." The Passport suffers no such restrictions. Drivers that know how to choose a line can thread the kinds of rock gardens and moderate slab steps that separate tourist heavy trailheads and faraway, first-rate vistas. Plenty of drivers among the assembled press didn't practice any fineness of line, however. This writer was, more than once, restrained by the passenger's seat belt as the Passport's bow dropped off a berm and its stern bucked. The Passport didn't complain or come undone.

The only noteworthy omission is Hill Descent Control. When we asked Honda why that feature hadn't been included, we were told in an e-mail, "We feel the i-VTM4 and ITM systems available on the Passport provide the best all-wheel drive system attributes for how the vast majority, and certainly the Passport target customers, will use their vehicle off road." We don't disagree, and to be fair, almost all of the Passport's competitors don't have it. We're surprised not to see it just because it usually comes with "Adventure!" branding. 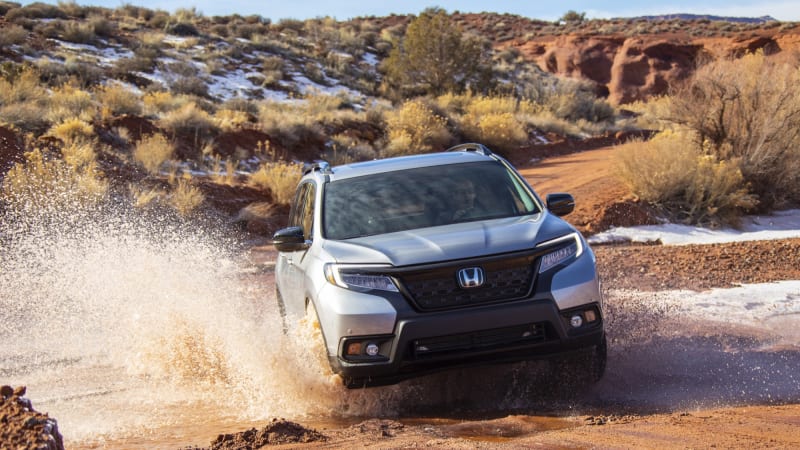 The price for this kind of adventure starts at $33,085, including $1,095 destination fee, for the Sport trim with two-wheel drive. Above that, the EX-L commands $37,455, the Touring $40,325. Those are all two-wheel-drive prices — adding AWD costs $1,900. The top-tier Elite, which comes with AWD, starts at $44,725. Because Honda Sensing comes standard, MSRP savings on the volume-model Passport EX-L versus similarly optioned competitor builds range from about $3,000 on an Edge to $7,000 on a 4Runner. In one instance of piling on, all Passports come with LED low-beams, and the Elite trim gets LED high beams, too. No manner of LED headlight can be ordered from the factory on the Grand Cherokee, Chevrolet Blazer, or 4Runner. LED headlights are standard on the Murano, optional on the Edge.

Stepping back off-road for a moment: We must admit that a Pilot and a Ridgeline shadowed us along the same Arches National Monument trails. This makes the point that the Passport doesn't exist to prove a capability currently lacking in the Honda lineup. Yes, the Passport's approach angle, and especially its departure angle, best the Pilot and Ridgeline, but the Passport exists to provide such capability in the packaging customers want, and price won't be the all-conquering factor.

As one could say of any of the competitors, there is no electrifying revelation in the Passport. The novelty here is that Honda finally has a competitor in the segment, one that's worthy of halting the customer exodus. It doesn't cover new ground, but it does look the part. 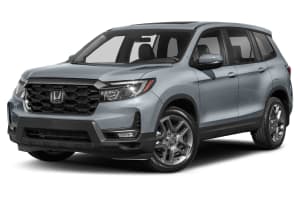 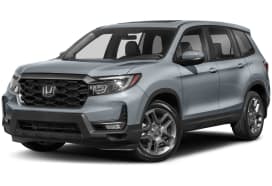