Out-vans the vans, without standing out

WESTLAKE VILLAGE, Calif. – No one expected the SUV craze of the 1990s to be as big as it was, least of all Honda. To capture the rapidly expanding market, Honda, which had traditionally kept to best-selling sedans, superbly handling sports cars, and motorcycles, was forced to partner with Isuzu and rebadge its Rodeo as the Passport. It was a smart move, because SUVs quickly supplanted sports cars as the cool cars to have for image-conscious drivers, putting models like the Camaro and Nissan Z on hiatus, and killing off models like the Mazda RX-7 altogether. Meanwhile, Honda quickly got to work developing an SUV of their own.

Since Honda didn't have much experience building large vehicles, they went with a unibody and a drivetrain shared with the Odyssey minivan. The Pilot debuted in 2003, and oh, how the makers of body-on-frame SUVs laughed. It's not a real truck, they said. It can't go off-road, they said. But as it turns out, a car-based SUV, or crossover in today's parlance, with three rows and plush sedan-like ride, was what the majority of SUV buyers truly wanted anyway. Honda laughed all the way to the bank.

Honda was first-to-market with a three-row car-based SUV – specifically the MDX, which was related to but slightly predated the Pilot – and has been refining that formula ever since. And now, as even sedan sales are facing the wrath of America's insatiable appetite for crossovers, the Pilot is well-poised to find the class's sales sweet spot. The 2019 mid-generational refresh has changed little with regards to the Pilot's hardware, but product planners crammed each of its five trim levels chock-full of features like Steve Jobs launching a new iPhone. 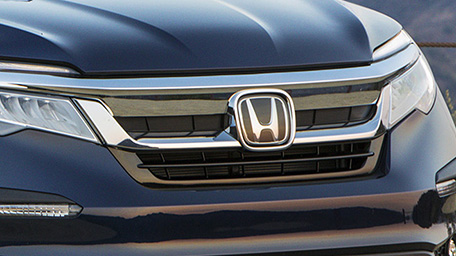 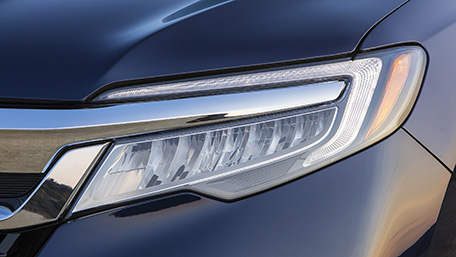 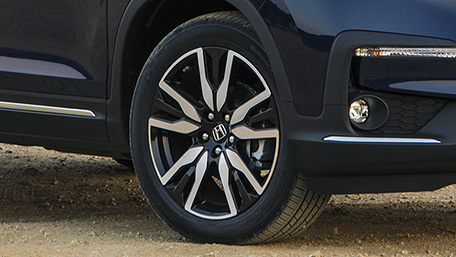 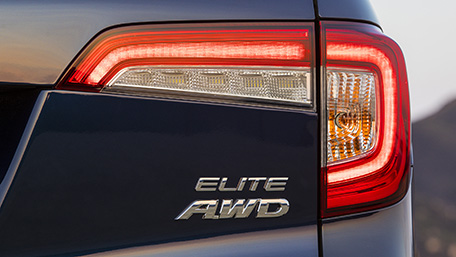 Perhaps the biggest development — and the one most important to families who can't bring themselves to pull the minivan trigger — is the standardization of Honda Sensing on all trims, from the entry-level LX to the top-of-the-line Elite. The suite of electronic safety features —adaptive cruise control, pre-collision braking, road departure mitigation, and lane-centering assistance — brings the Pilot in line with competitors like the Subaru Ascent and Toyota Highlander, and one-ups models like the Ford Explorer, Mazda CX-9 and Volkswagen Atlas, on which these features are either only available on higher trim levels or as optional extras.

For 2019, Honda's plucked several features from its Odyssey minivan that were previously unavailable on the Pilot. EX and higher trims now have CabinControl, the ability to turn up to seven smartphones into remotes for the infotainment system. With the optional Rear Entertainment System selected, the popular EX-L trim adds CabinTalk, allowing parents in front to broadcast the "voice of God" into back rows via speaker or directly into rugrats' headphones. Touring and higher trims get the HondaLink telematics system and 4G LTE mobile hotspot, while Elite models receive wireless phone charging compatible with both Powermat and Qi, as well as power-folding auto-dimming side mirrors.

In fact, most of the Pilot's improvements have been geared towards making life more convenient when you're hauling a brood. For example, chief engineer Lara Harrington told us that one of the most requested features was the hands-free tailgate, available on Touring and higher trims. It's activated with a kick under the rear bumper if the key fob is on your person, but on competitors' cars "people didn't know where to wave their foot," she explained. "So we made our sensor wider, as wide as the rear skid plate." 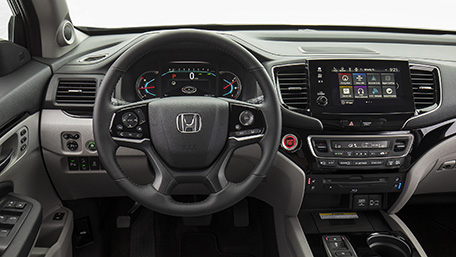 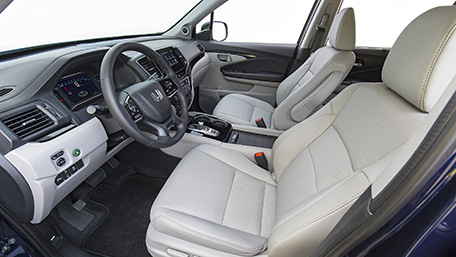 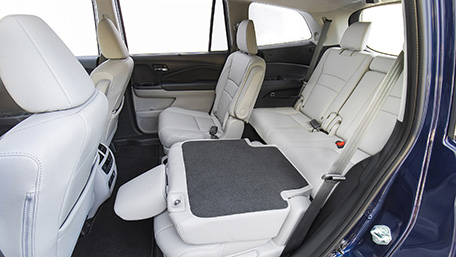 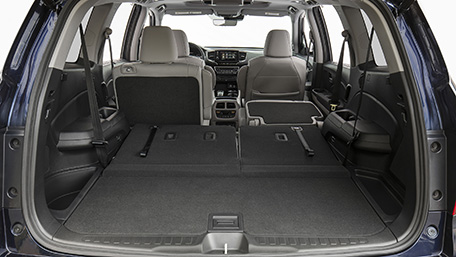 Even the center console had some serious thought behind it. "That thin, sliding cover was engineered to sustain the weight of a six-year-old," PR manager Jimmy Jenkins revealed. "It was also designed so that if you spill any liquids on top, it would run into a catch tray at the console's base, rather than drip into the compartment," he explained.

Some of the best design results in things that you don't have to think about. Harrington added, "[The console's] shape and position relative to the armrests is such that you can reach back to the second row much easier." Indeed, during our test drive a rearward grab for a heavy backpack was so easy, we didn't even notice.

Keeping with that spirit, a volume knob has returned to much fanfare on the infotainment display. You no longer have to take your eyes off the road and fiddle with a touchscreen menu simply to turn up the music. It seems Honda's learned the lesson, "If it ain't broke, don't fix it," but we wish the same could be said for the gear selector. The array of buttons takes up just as much area on the console as a traditional shifter, but is unintuitive and requires focus to figure out, as opposed to just slapping a lever into position.

The easiest way to distinguish a 2019 Pilot from the pre-facelift model is by looking at the front. LED headlights are now standard, and the grille has been redesigned to conform to Honda's "flying wing" corporate look. Combined with a reshaped fascia, the Pilot now bears a closer family resemblance to the popular CR-V and the Ridgeline pickup. The taillights and rear bumper have been redrawn too, exuding a hint of extra class. Still, we found the overall shape fairly amorphous, lacking a distinct identity or the minimalist elegance Honda design was once known for. Nearly all of the Pilot's rivals have stronger presence so if you buy one, don't be surprised if you walk past it in the Costco parking lot several times before finding it. 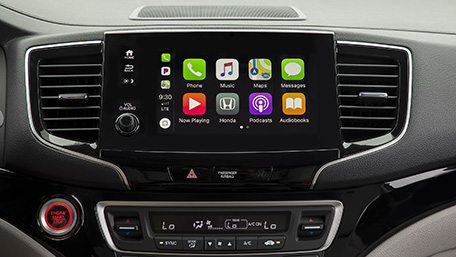 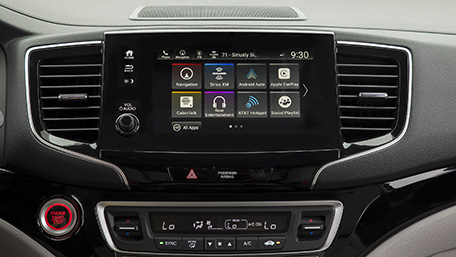 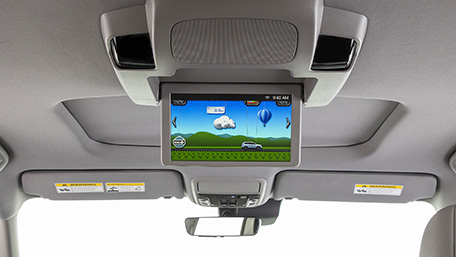 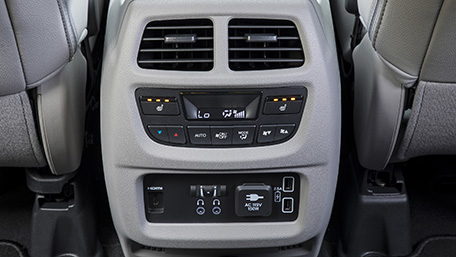 Honda, for its part, says that the redesign was intended to emphasize the Pilot's toughness on non-asphalt surfaces. They even let us drive onto an off-road course. Just by dint of its ground clearance, it was able to clear moguls and berms far more aggressive than what most Pilot pilots would dare tackle. With a three-second hill-holding assist it feels secure on steep grades. However, any trails with exposed rocks larger than a football will have to be avoided due to an independent front suspension and the low-hanging oil pan in between.

Where the Pilot shines, though, is on loose surfaces. Honda has a trick all-wheel-drive system with an "intelligent" variable torque management system called i-VTM4. Not only does it apportion rotational force front to back (up to 70 percent can be directed rearward), but side to side as well (with up to 100 percent of rear torque to either rear wheel), making it quite handy for see-saw situations where one wheel was completely off the ground. Furthermore, AWD Pilots come with Honda's traction management modes for surfaces like snow, mud or sand. The system changes the electronic throttle response, shift points, and rear-wheel bias, letting even the most ham-footed driver navigate tricky terrain.

The 280-horsepower 3.5-liter V6 with cylinder deactivation carries on unchanged. A 6-speed automatic comes standard, but Touring trims and higher have a 9-speed. We didn't experience the gear hunting found in the 2016 model this time, so perhaps the shift map has been updated. At 4,319 pounds, though, the Pilot is no S2000. Steering is tighter than that of, say, a Nissan Pathfinder, but the suspension tuning is just a tad too soft. We always felt the weight of the vehicle fighting against it, causing the body to heave in slow motion like a pirate ship. The same drivetrain in a Ridgeline Black Edition, heavier by nearly 200 pounds, feels sportier. 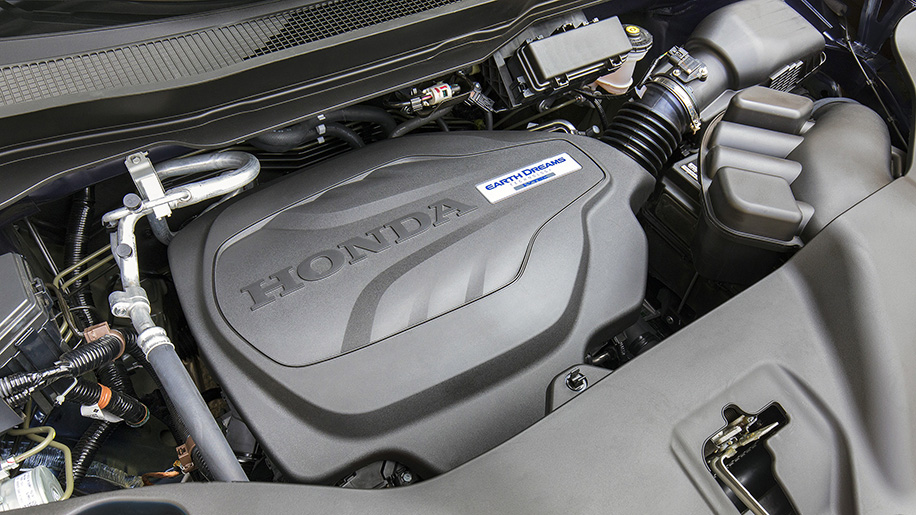 The Pilot can pull up to 3,500 pounds, or 5,000 pounds with the optional towing package which adds a transmission cooler, hitch, trailer brakes and wiring hookups. With a double-axle trailer and a Civic Si race car in tow, the Pilot was surprisingly composed despite its short wheelbase relative to full-size SUVs and as long as we didn't make any sudden movements. The capacity betters that of a CX-9 by 1,500 pounds, is equal to that of a Highlander, Explorer and Ascent, and 1,000 pounds less than that of a Pathfinder.

Our Elite AWD tester rang in at $49,015, inclusive of destination charges. That lands it right in the middle of the class, at $715 more than a loaded Toyota Highlander Limited Platinum, $1,710 pricier than a maxed out Mazda CX-9 Signature, and $3,345 and dearer than a fully equipped Subaru Ascent Touring. It remains $720 cheaper than a Volkswagen Atlas SEL Premium, and almost $5,000 less than a Ford Explorer Platinum.

It'd be easy to dismiss a crossover like the Pilot as a minivan in everything but name, but the Pilot is more than a minivan. The 2019 Pilot now has all the features of the Odyssey, plus i-VTM4 AWD and some light trail and towing capability – and none of the metaphorical baggage. And just like the original Pilot, its combination of family-friendly features, the addition of a standard suite of safety tech, and the ability to tackle light SUV duties is what buyers – including minivan shoppers – really want.