GMC Envoy could be returning as GM files for 'Envoy' trademark

Could it be a Blazer-based crossover?

Zac Palmer
The GMC Envoy could be on its way back, if a recent GM trademark filing is any indication of the future. To be exact, GM's trademark filing is for the name "Envoy," and is applicable to "motor vehicles, namely, sport utility vehicles, engines therefor and structural parts thereof."

A victim of the recession and high gas prices, the original Envoy – related to the Blazer, and more recently the TrailBlazer and similar GM SUVs – was discontinued after the 2009 model year. In today's SUV-happy market of low gas prices, unearthing the somewhat familiar Envoy name makes a certain amount of sense. As soon as gas prices start trending in the other direction, we'll all be saying the opposite, though.

What this SUV will take shape as is the big question now. With the Chevrolet Blazer well and truly on its way, there's every reason for a GMC version of Chevy's stylish new crossover sporting the Envoy name. Another, less likely, possibility is a Traverse-sized vehicle to slot between the shorter Acadia (10 inches shorter than the Chevy Traverse) and the body-on-frame Yukon.

GM could come out of left field and make the Envoy a Buick too. It fits the bill with the "En" beginning, and Buick undoubtedly has crossovers in the works. We think that's even more unlikely, but it's important to remember that we're still in the speculation phase. Soon we'll drive Chevy's new Blazer, and perhaps have more news then. Check in next week for that. 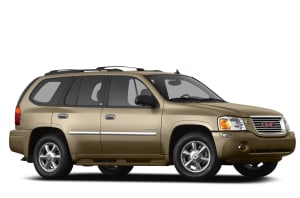