The red-badged Civic finally makes its way to the States. It does not disappoint. Getting into Montreal ahead of the 2017 Formula 1 Canadian Grand Prix, the city is alive with the sounds of pedestrians, house music, and the revving of expensive cars echoing off the stone facades and cobblestone streets of Old Montreal. On Thursday night, I eat dinner on a fourth-floor terrace overlooking Place Jaques-Cartier. A few feet away on this rooftop is the 2017 Honda Civic Type R, placed up there by crane, and we give it a good look over before we sit down to eat.

From the outside, the Type R is compelling, if complicated. There's a lot going on, what with the many lines and vents and the giant wing in the back. It's wider than the standard Civic, with a wider wheel package as well. It's really a nice car to inspect closely, as there are many small, attractive features to catch one's eye.

The aerodynamics make up a big part of the visual package, and it all serves a function. The hood scoop feeds cool air to the entire engine bay. Vents at the front channel air into the engine, over the brakes, and past the wheels. A front splitter morphs into a pair of winglets at the car's front corners. Vortex generators at the top of the car direct airflow over that large rear wing (which is so tall, in fact, that it doesn't block the view out of the rear window). Side skirts step up into another set of channeled winglets in front of the rear wheels, which also help produce downforce. 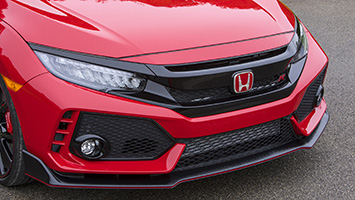 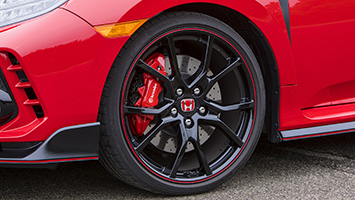 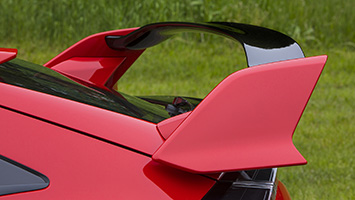 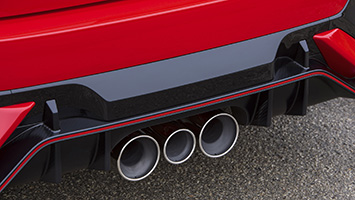 The next morning, we head out to ICar Mirabel, away from the clamor of the city, and our first driving impressions of the Type R take place on a portion of an airport that's been converted into a track facility. When it's our turn, we put on our balaclava and helmet, step into the pit lane, and hop into the driver's seat with a pro sitting shotgun and the car set to its most aggressive drive mode.

Shifting the car into gear, we're reminded just how good Honda manual transmissions feel to use, and swapping gears with the Type R's six-speed is a joy. The clutch pedal is light and easy to modulate. The aluminum shift knob feels good in hand, and throws from one gear to another are short and precise, falling into place with a palpable, metallic clack. Automatic rev matching blips feel heroic, ensuring smooth downshifts as fast as you can move your right hand. If you're one of those people who just has to do everything yourself, you can turn that feature off when you want to practice your heel-toe shifting.

Taking off with 306 horsepower and 295 pound-feet of torque, this 2.0-liter turbocharged engine steers well clear of any potential nags about the Civic Si's power. The Type R pulls quickly and smoothly up to its 7,000-rpm redline, with turbo lag and torque steer almost imperceptible. Honda has sharpened the throttle response compared to the last Type R sold in Europe, and a low-inertia turbocharger with electric wastegate helps build and control boost pressure, which maxes out at 23.3 psi. We didn't get anywhere near the Type R's impressive top speed, which Honda says is about 170 miles per hour. 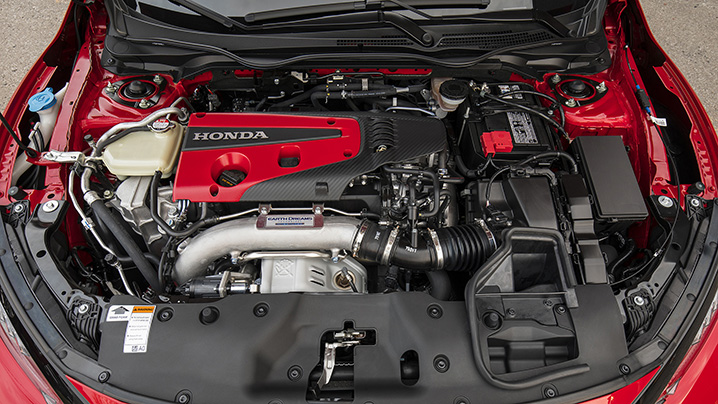 The Type R sounds appropriately burly, too. The center-mounted triple exhaust out back not only looks different, it works a neat trick, too. That odd-looking, slightly smaller pipe in the middle is a resonator, which allowed Honda to tune the exhaust note to its deep, throaty song. Higher in the rev range, though, the resonator provides negative pressure, which actually reduces the exhaust noise. While that might sadden those of us who crave the banshee scream of ripping the car to the top of each gear, the NVH improvement makes it a little less exhausting to live with in relaxed, real-world driving.

For a front-drive car, it's really stable. We don't notice any torque steer thanks in great part to the front suspension setup, which separates the steering axis from the stroke access, moving the former as close as possible to the centerline of the front wheels. I didn't encounter any understeer in the corners, either. It helps that the car provides a lot of feedback about lateral grip levels, and with the wide, 20-inch wheels, there are oodles. A limited-slip differential helps sort out wheelspin in the turns as well, rounding out the Type R's impressively calm cornering capabilities.

In +R mode, the steering effort is dialed way up, as is its directness. It feels very pointy and precise, and, with the help of a well-tuned chassis, it goes where you want it on the course. Even for a far-less-than-perfect track driver like your author, it was really easy to place the Type R right where I visualized it going. Variable ratio steering means it's easy to keep it stable at high speeds, and its track precision translates to easy lane placement in real-world driving, which we got to experience after finishing up our session at ICar. 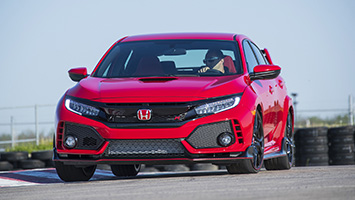 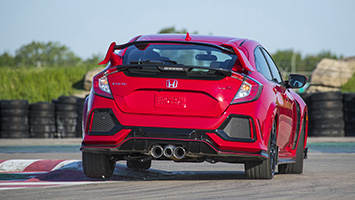 The Type R has a total of three drive modes that manage steering, suspension, throttle response, the color scheme on the instrument cluster, and even the sharpness of the rev matching. The car defaults to Sport mode, but offers a Comfort mode for more relaxed driving, as well as the +R mode we experienced on the track.

Compared to the average hatchback, the adaptive suspension in Comfort mode is still pretty darn sporty. Its communicative, which it's always going to be on those big, 20-inch shoes, but not as flat in the corners as in the more aggressive modes. Sport mode provides good stability through the suspension when turning, and gives a lot more sense of what the road surface is like, particularly the smaller undulations. In +R, you feel more of the tinier road imperfections, but we didn't find it to be uncomfortable, at least not on the fairly smooth forest roads we drove.

Though the steering effort in +R is great on the track, it's a little too much for driving on regular roads. Sport mode is a bit more appropriate, especially in the sweeping curves on our drive route between ICar and a little lunch spot called Le Snack Shack (yes, they had poutine on the menu). Still, we found the steering effort in Sport to be more on the firm side than was comfortable for a long drive. It's a rare car that feels tight enough for tying a few corners together in Comfort mode, but the Type R pulls it off. 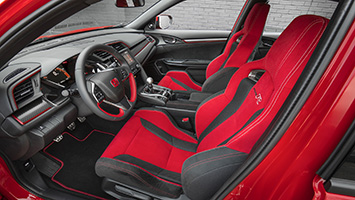 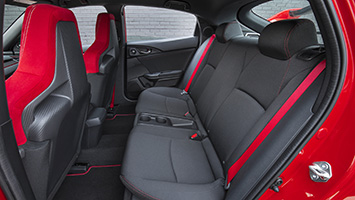 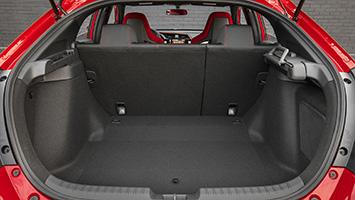 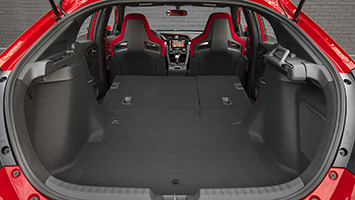 On the instrument panel, between the two round gauges is a digital display that offers a number of useful pieces of information. It can show the practical audio, directional, or mpg features for your normal, daily driving. When you're having a bit more fun with the car, though, that display can provide data about turbo boost pressure, brake and throttle input, G-forces, or even a lap timer.

The seats are super supportive, designed race-ready by Honda. When getting into the car, you might get goosed by the high side bolstering on the seat cushion, but once you're in, you're in. They do a great job of keeping you in place as you dial in steering toward an apex or accelerate around an onramp. The comfort and support holds up in longer drives, and we still felt perfectly cozy after spending a couple hours on the road. 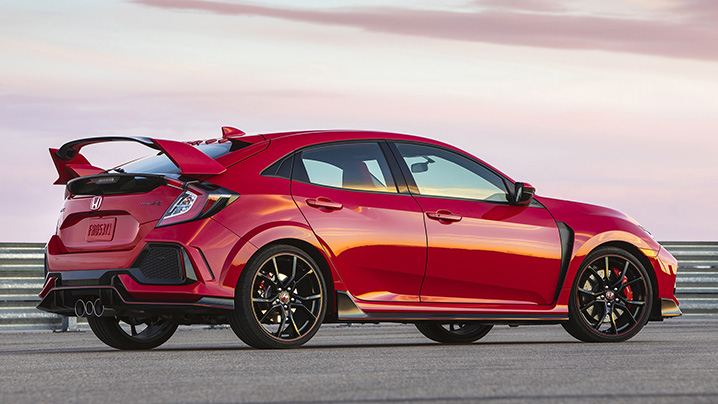 At $34,775, the Civic Type R is equipped at the equivalent of the Touring trim level, and there are no other trims or options – apart from a list of accessories – that can raise the price. At its base MSRP, the Type R comes with seven-inch touchscreen navigation, Apple Carplay and Android Auto, LED lighting, auto on/off headlights, as well as those 20-inch wheels and adaptive damping we talked about earlier. Your toughest choice is the exterior color, of which you have five options: red, white, black, grey, or blue.

Despite its looks, power, and overall athletic capability, the Civic Type R's behavior never crosses the line into the realm of hardcore. Even in +R mode, it's a civilized, compliant, and pleasantly comfortable vehicle. At the same time, its most easygoing, dialed-back setting is sporty enough to be constantly entertaining. After our single day driving the Type R, we got caught up in the momentum of the F1 race weekend, but our thoughts kept returning to the hottest of Civics even as we watched dedicated race cars defy physics at Circuit Gilles Villeneuve. We're looking forward to our next chance to get behind the wheel.