Brett Berk
HIROSHIMA, Japan — When visiting the Mazda Museum in Hiroshima, housed amidst the company's main manufacturing site on the shore of the Enko River, you can follow Jujiro Matsuda's early 20th century entrepreneurial path from artificial cork manufacturer to machine and machine toolmaker, to motor vehicle producer. But probe a bit deeper into the exhibits, and you can uncover more than just a chronicle of corporate achievements: delightfully weird outliers, paragons of oddball design, engineering and marketing solutions

It's looking at these delightful misfits that really illustrates Mazda's tale. You can also see precisely how many of these vintage conveyances led directly (or indirectly, or obtusely) to Mazda's most iconic American-market cars and trucks. Our seven favorite precursors, and their lovable successors, are listed below. 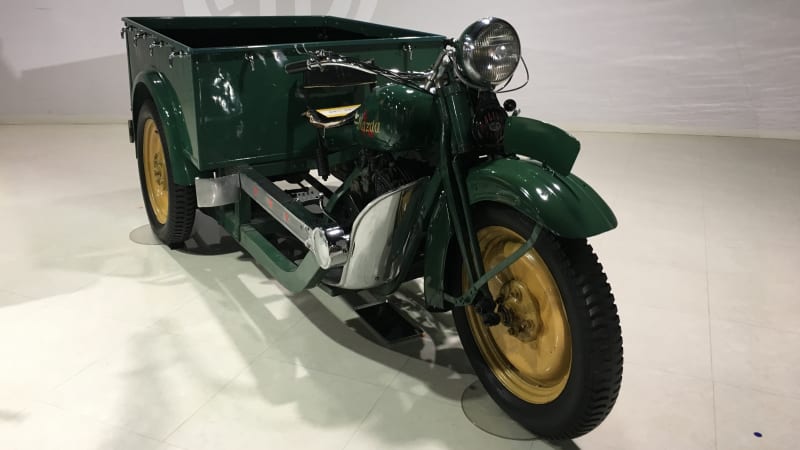 Mazda's first vehicle was this little three-wheeler, powered by an air-cooled, one-cylinder motor. Because the company lacked a distribution network at the time, the trucklet was marketed by Mitsubishi; hence the three-diamond pattern on its side. All of this is very reminiscent of the company's eventual foray into the U.S. market, where its sales were spearheaded by compact pickups. 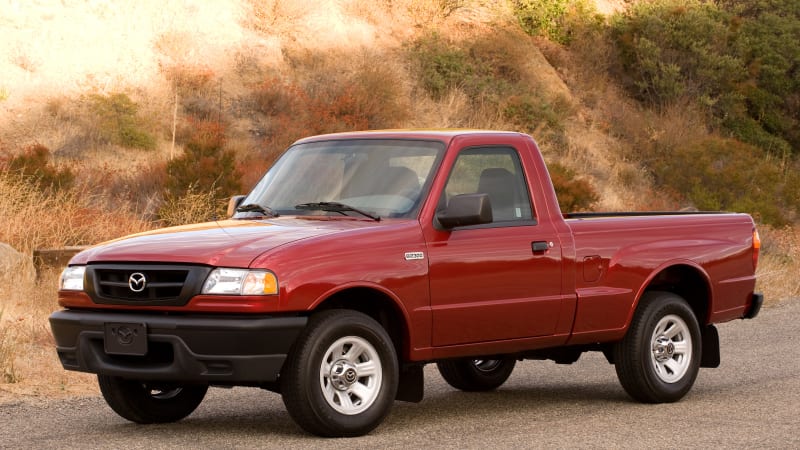 The B-Series, which was one of the first Mazda vehicles available in the U.S., arrived in 1972, and stuck around through the first decade of the 21st century. Like its partnership with Mitsubishi, Mazda teamed up with stakeholder Ford to market this little truck as Ford's first small pickup, the Courier, the precursor to the Ranger. There was even a rotary-powered B-Series for a few years, but we're getting ahead of ourselves. 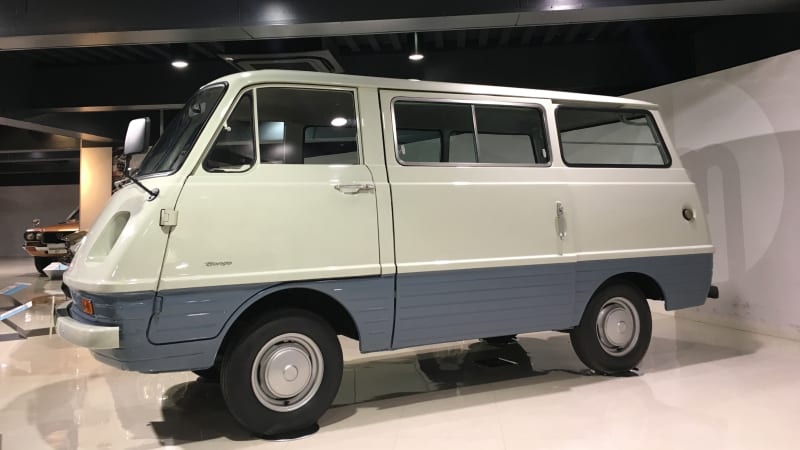 The Bongo allegedly was the first one-box van design in Japan, and apparently it was so popular that the name Bongo became, for a period of time, the generic metonym for the category—the way that Kleenex is a stand-in for all facial tissue. With a tiny rear-mounted engine and a planar expanse of metal to push around, it was not particularly fast, but it was both spacious and innovative. 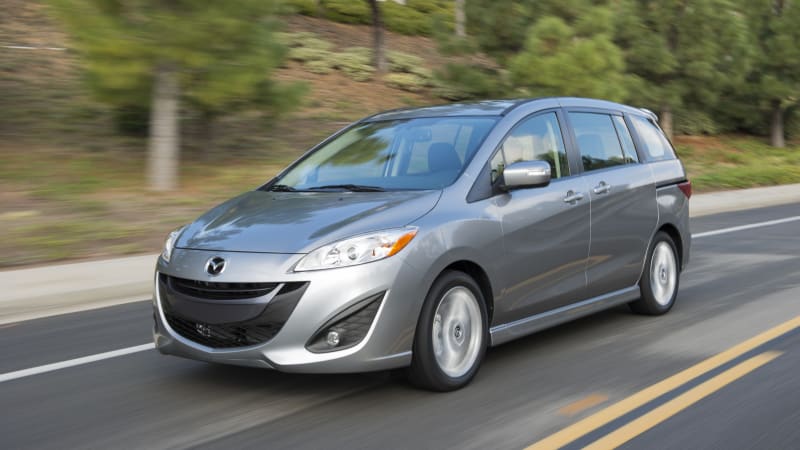 The same could be said of the brand's mini-minivan, the Mazda5, which was available for a couple of generations in the States in the Aughties. Sadly, the name 5 never caught on as a synonym for fun-to-drive family hauler, at least not yet, and the category itself (like nearly every other car category) was crushed in America by the rise of the crossover. 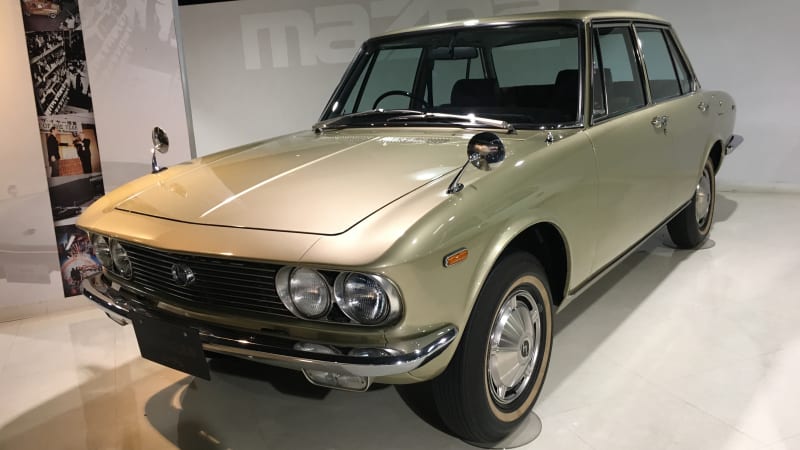 The Luce was Mazda's first larger car, a compact in the day's parlance, but more akin to a midsize vehicle today. To help create a compelling design for this flagship, the company went to legendary Italian carrozzeria Bertone for assistance. This explains the slight Lancia-esque appearance and the upright but curvaceous passione in its stance. 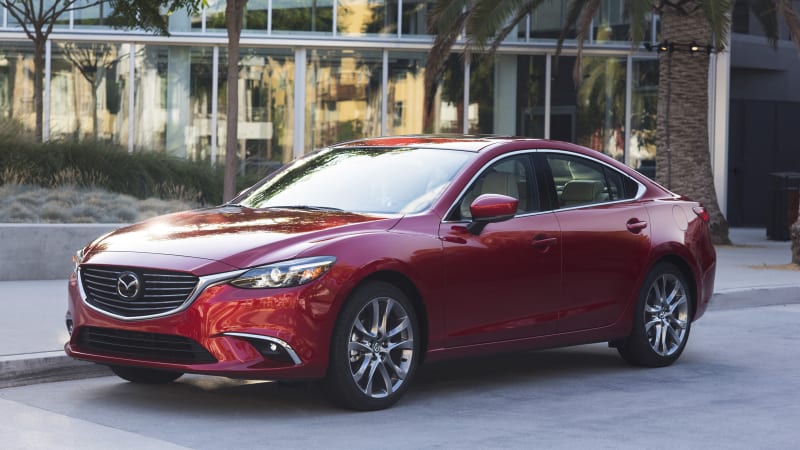 Decades later, Mazda would use this same formula in its Mazda6, applying the brand's "Stylish, Insightful and Spirited" tagline for the first time. It stood out from the competition with noteworthily swoopy, Italianesque styling as well as driving dynamics, making it somewhat of a modern-day Lancia Fulvia. 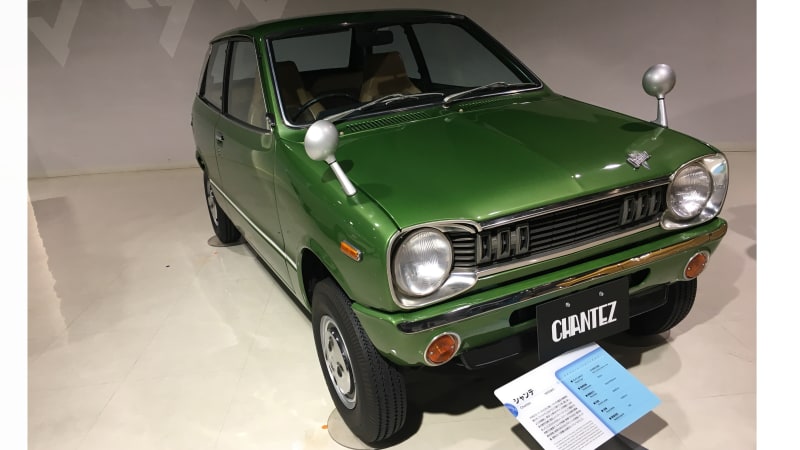 The adorable, amphibian-green Chantez was only Mazda's third passenger car, a water-cooled, two-cylinder hatchback. Slightly larger and more potent than most of the tiny Japanese kei cars on the market at the time, the Chantez was pitched as a somewhat sportier option when compared with its competitors (though a sprint from 0 to 60 still took more than 30 seconds.) With a French name and somewhat Gallic styling, it also stood out among its peers. 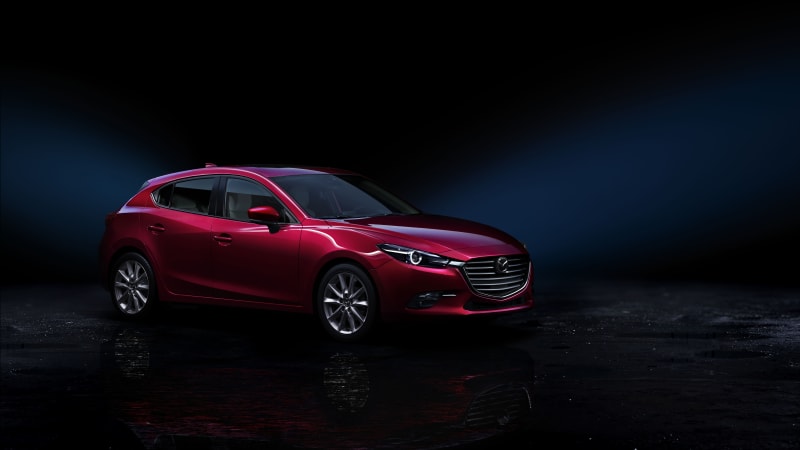 If this recipe—more fun and more style than just about anything in the category—puts you in mind of the contemporary Mazda3, you are not alone. That feeling is very intentional. 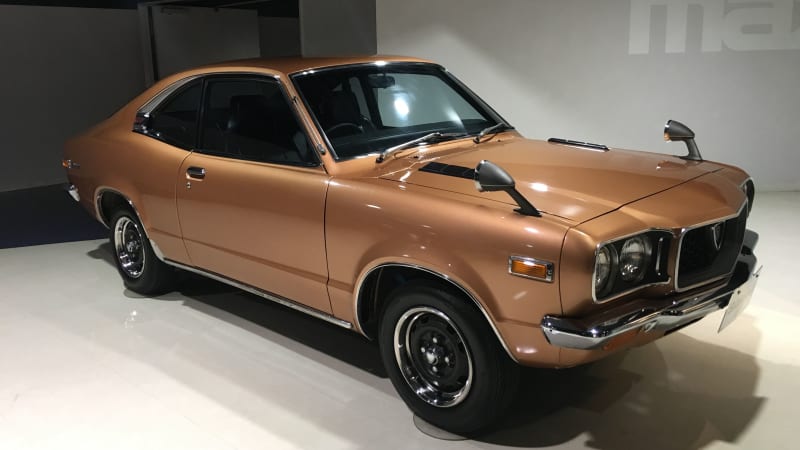 The connection in lineage is rather direct here, but still worthwhile. The Savana GT was the first Wankel-powered Mazda RX sports coupe exported to the U.S., back in the early '70s. It was known here as the RX-3. Featuring a water-cooled, up-powered twin-rotor engine with a five-speed stick, a sleek bullet shape (enunciated by this cupric hue) and blacked-out trim inside and out, it set the template for successive RX vehicles, including three generations of the RX-7 and one of the clamshell-doored, four-seat RX-8. 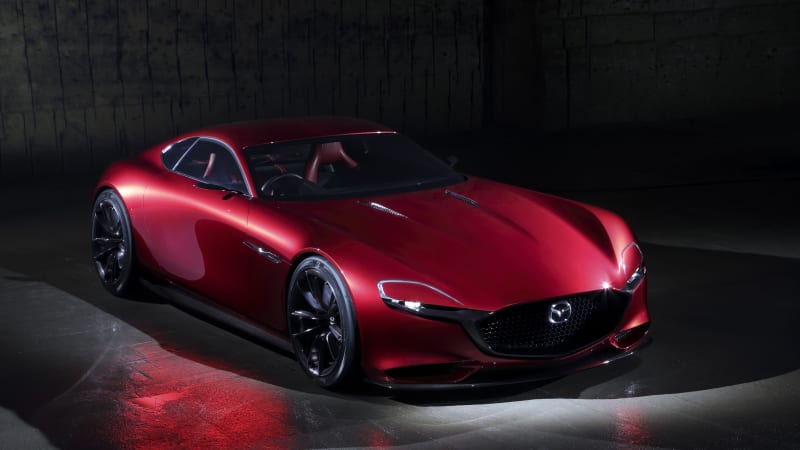 Sprouting out from the same family tree is the 2015 RX-Vision concept, purportedly a study for a future ellipsoid-engined sports car, perhaps called the RX-9, and perhaps to be released for the brand's 100th anniversary in 2020. 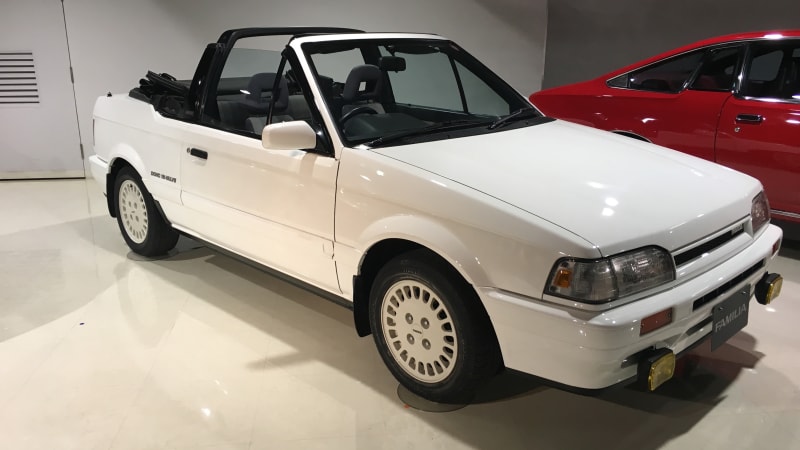 We admit that we're stretching it here a bit, but bear with us. The Familia, known as the 323 here in the States, was an econobox with occasional sporting pretensions. There was even a version with all-wheel drive and a turbocharged engine that competed with aplomb in Group A rally events, the 1980s racer version of everything. This particular armature-equipped convertible model had a slightly detuned and downsized version of that motor, but still provided an airy and fun-to-drive experience with some (perhaps illusory) rollover protection. 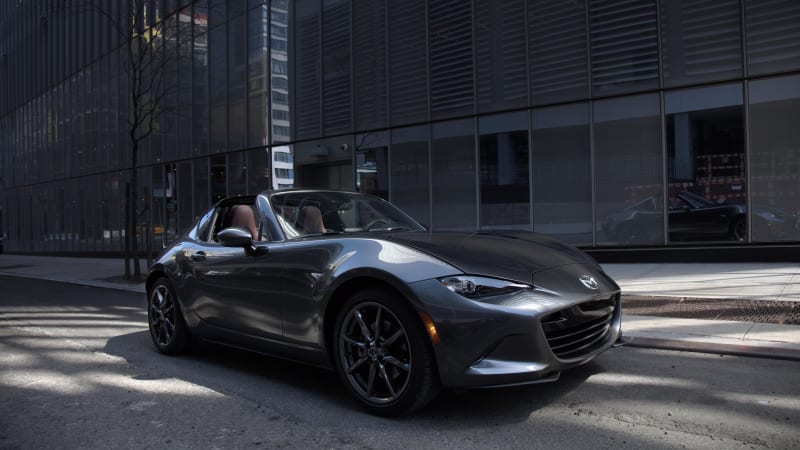 This not only makes it the only Mazda convertible we can think of outside of the Miata—which was first released just a couple years later—but the one that is also closest to the lovely, delightful, targa-topped RF version released last year. 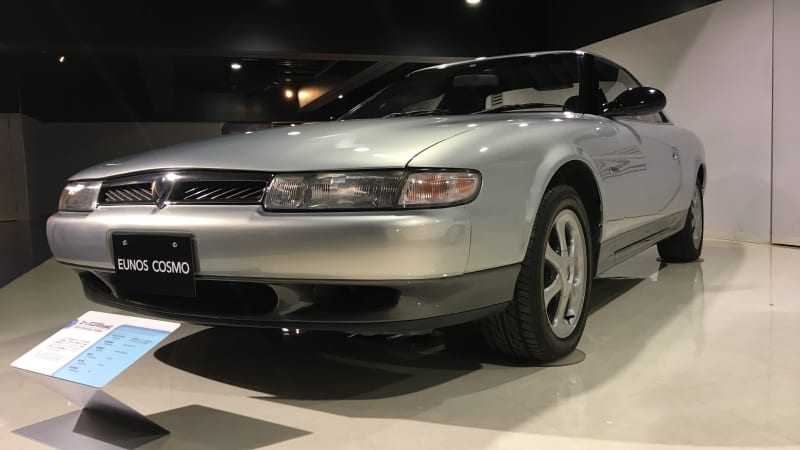 We had to save the best for last. The outlier of outliers. Leave it to a group of former fake corkmakers to uncork this lusciously sleek full-size sports coupe. Featuring the world's only production triple-rotor engine, it was intended to be the middle child in the launch of a Lexus-like upscale brand, Amati. (A honking, W12-powered, full-size sedan was supposed to sit atop that pyramid!) Instead, it was just the successor to the glorious Cosmo coupe of the late 1960s, the world's only six-figure collectible Mazda. 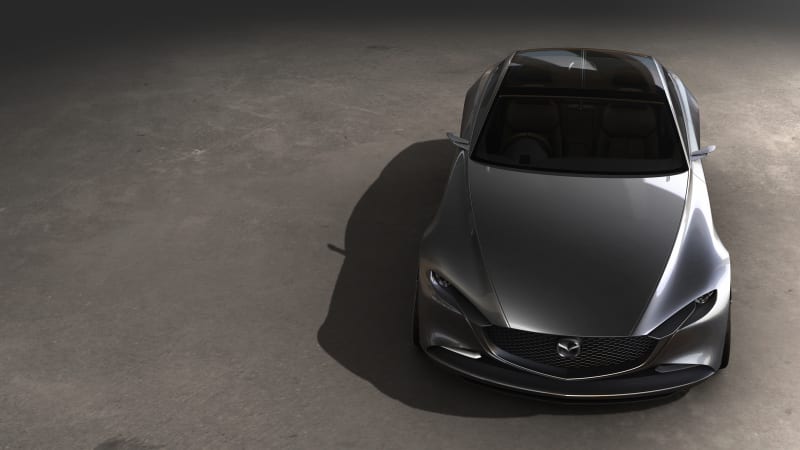 When Mazda unveiled its stunning, minimalist, range-topping Vision Coupe four-door concept last year in Tokyo, we heard Amati bells tolling. Pray for a triple rotor, hope for a hybrid, but our W12 illusions are already dashed.