2019 BMW X7 is BMW's biggest SUV with its biggest grille

The 2019 BMW X7 flagship SUV is finally here, and, boy, is it big. It's the largest crossover in BMW's lineup by far, at about 9 inches longer than the X5. It's actually just 3 inches shorter than the standard-wheelbase 7 Series. And in the words of BMW, it has "the largest kidney grille ever designed for a BMW model." As for how these literal great lengths look in practice, well, it's a mixed bag. Most of the SUV looks pretty sharp. It has clean, elegant lines, and a refreshingly upright, traditional SUV profile. The nose is where things get messy. The slender headlights look modern and menacing, but the grille seems a bit much. It's just so tall, and the small lights exaggerate the size even further. BMW probably hoped it would look proud and stately, but we can't shake how reminiscent it is of beaver teeth.

Whether you love or hate the looks, they wrap a rather practical package. All X7s come standard with three rows of seating. With the standard second-row bench, it will seat seven, but there's an option for a second row of captain's chairs that bring seating down to six, and they introduce the same seating adjustments that front passengers receive. Interestingly, BMW has not announced any sort of executive model with just two rows and wild, luxurious reclining seats and other accoutrements, but that might be something that comes later. In addition to the standard three-row seating, the X7 has a healthy 48.6 cubic feet of cargo space behind the third row and 90.4 cubic feet with both rear rows folded.

The interior looks quite plush, at least in the example the company showed. It features twin 12.3-inch screens for the instruments and the infotainment. The shape of the dashboard is pretty conventional BMW, but every surface appears to be eligible for leather and wood that look very attractive and expensive. The blue and gray color combination of the display car looks lovely. The blue suede roof really helps bring things together. Occupants get to enjoy sunroof panels over every row of seating, along with four-zone climate control. There are high-end options available, too, such as a 1,500-watt Harmon Kardon sound system and an LED-illuminated sunroof that can display different patterns and colors against the glass, and can even simulate a starry sky. 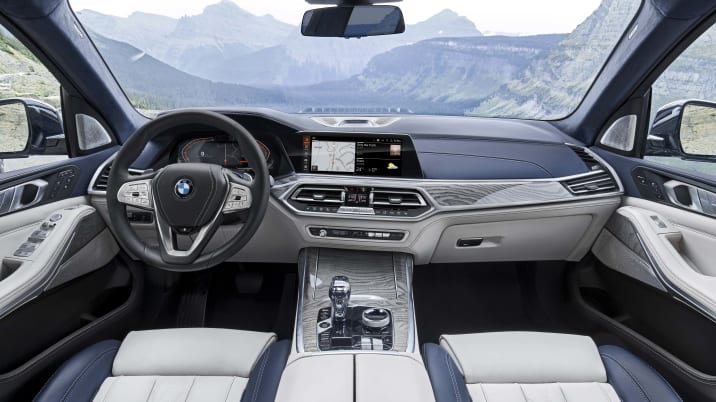 Powering the new X7 is the buyer's choice of a single-turbo 3.0-liter inline-6 in the xDrive40i or a twin-turbo 4.4-liter V8 in the xDrive50i. The six-cylinder makes 335 horsepower and 330 pound-feet of torque, and the V8 makes 456 horsepower and 479 pound-feet of torque. Both are connected to an eight-speed automatic and all-wheel drive. The all-wheel-drive system can send 100 percent of the power to the rear wheels, and there's an electronically controlled rear limited-slip differential available with the Dynamic Handling Package and the Off-Road Package.

Suspension on all X7s is fully independent with dual wishbones at the front and a five-link setup at the back. They're coupled with air springs that can raise and lower the ride height. It will even lower for easier loading if you wish. BMW also adds some trick handling features with the Dynamic Handling Package, including rear-wheel steering, active roll mitigation, and an adaptive suspension system that uses a forward camera to firm things up for corners and to prepare it for road imperfections.

The 2019 BMW X7 hits dealers this coming March, but BMW will start taking pre-orders this month. Those who take advantage of early ordering, a first for a BMW product, will be able to spec the car as desired and have it be a priority vehicle when production begins. Speaking of which, production will be in Spartanburg, South Carolina alongside several other X models. Pricing starts at $74,895 for the xDrive40i, and the xDrive50i starts at $93,595.