Ford is going all in on crossovers

PARK CITY, Utah — The central Rockies are a wonderful place to visit any time of the year, but the scenery in early fall is particularly striking. I'm in Utah to drive the 2019 Ford Edge, and all I want to do is hike and take photos of the foliage — thin air and brisk wind be damned. The drive from the Salt Lake City airport across the mountains to Park City was a stunning blur of red and yellows leaves, all accented by the white trunks of thousands of birch trees.

The changing colors brought on by the new season really helped set the mood. In a radical announcement earlier this year, Ford said it was discontinuing sales of all cars in the U.S. save for the Mustang and Focus Active, to focus its time and energy on CUVs, SUVs and trucks, the three hottest segments on the market. A few months later, the company reversed course on the Focus Active, too. While the company does have a wide stable of crossovers, if the plan is to go all-in on them, Ford needs to rework and renew its lineup.

Despite Ford's liberal use of the phrase "all-new" in reference to the 2019 Edge in both press and marketing material, this is a mid-cycle refresh for the second-gen Edge that debuted in 2015. Sales of the current Edge have been increasing year over year since it was launched. Though there have been some notable alterations, most of what you see here is a carryover from that model. The big news, of course, is the Ford Performance-tuned 2019 Edge ST (a model that replaces the Edge Sport), but we'll cover it in a separate review soon.

The 2019 Edge gets new front and rear fascias, drawing influence from the lame-duck Ford Fusion. The grill is wider than before, though the corners no longer meet the headlights. A front air curtain — standard on all models — helps improve fuel efficiency. The tailgate and rear bumper have been redesigned, too, with sharper lines and fewer reflectors. The new taillights are now separate units connected by a gloss black panel. LED lighting is standard both front and rear. There are a number of new color and wheel options available for 2019. Overall, it's a small but handsome update. 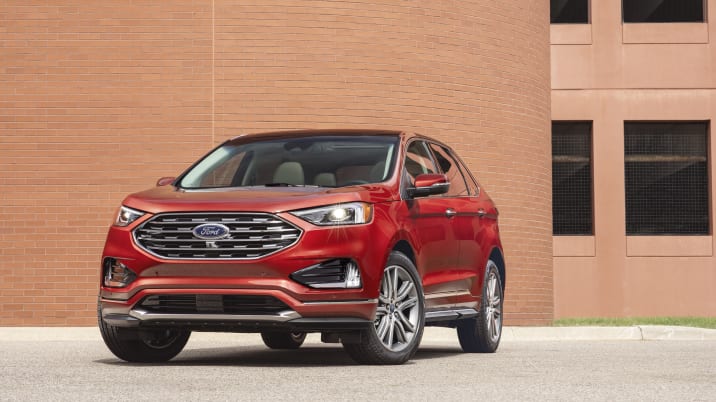 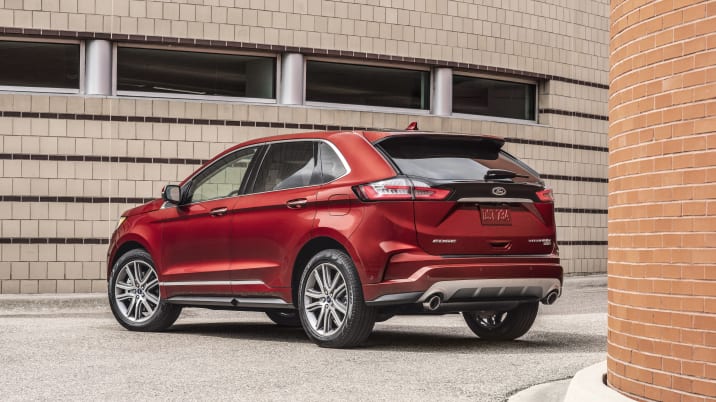 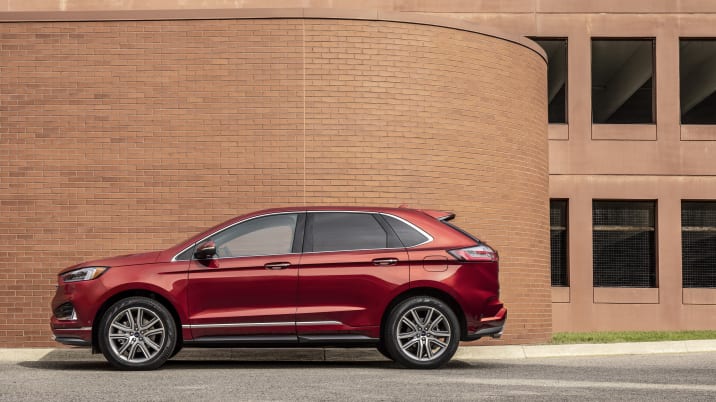 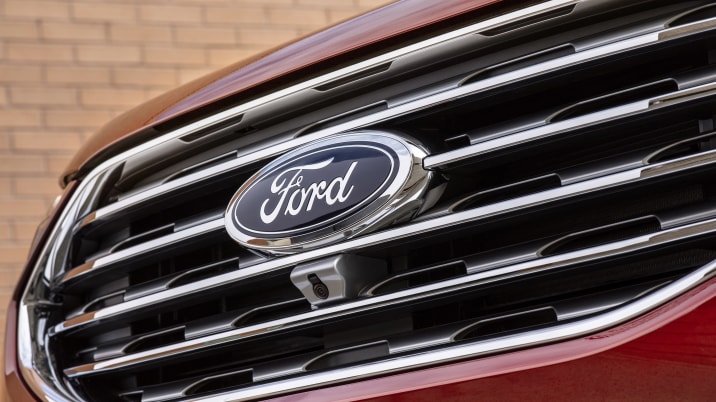 Conversely, the interior carries over nearly unchanged. The center console has been revised, with the new rotary gearshift making room for some additional storage, and a wireless charging pad (standard on the Titanium and optional on the SEL). Aside from the optional panoramic moonroof, there's not much else new inside. The general design is fine, but there's too much cheap plastic, especially along the console. The instrument cluster's digital displays are small and lack the sharpness of some of the competition. And even with the update, there just isn't as much storage as you expect from a modern crossover.

But there are a number of new features available on the 2019 Edge. Standard equipment includes automatic emergency braking, blind-spot monitoring with cross-traffic alert, lane-keeping assist, keyless entry with push-button start, rain-sensing windshield wipers, automatic high beams and a 4G WiFi (though you'll have to shell out monthly payments to AT&T if you want to take advantage of it).

Optional features include an enhanced driver assistance suite that adds adaptive cruise control, lane centering, park assist and evasive steering assist. We had a chance to try all of these out. The lane centering and park assist were particularly impressive. The former keeps the Edge centered on the road, even through a corner, without the ping-pong effect you get with standard lane keeping. Using park assist, the 2019 Edge can park itself, even in parallel spots. It's not new, but it is handy. Other options included heated and ventilated seats, an upgraded audio system, a 180-degree front camera and a hands-free foot-activated tailgate.

Using the 4G modem, the 2019 Edge can also integrate with Amazon Alexa. As someone who owns no fewer than four Amazon Echos, it's great to see automakers take advantage of smart-home capabilities. You can monitor your fuel level, use remote start and unlock the car using an Echo or other Alexa-enabled devices. When you're in the vehicle, you can use Alexa voice commands to open and close your garage door, check your home security system or play music or audiobooks. It still feels somewhat gimmicky and redundant, but the list of features and skills is improving.

There is plenty of room for passengers and cargo. The front seats are soft, wide and comfortable. The rear seats had plenty of leg and headroom, even in models fitted with the panoramic moonroof. I could comfortably sit in the second row, behind a front seat adjusted to fit my long-legged, 6-foot-tall self. The cargo area is low and wide and fits in between competitors like the GMC Acadia and Chevy Blazer in terms of space.

The Edge gets an updated 2.0-liter EcoBoost turbocharged inline four making 250 horsepower and 275 pound-feet of torque. The 3.5-liter V6 has been dropped altogether. Power is sent to the wheels through a new eight-speed automatic transmission. Front-wheel drive is standard, though a new all-wheel drive system is optional. The system allows all the power to be sent to the front wheels, decoupling the rear axle automatically (as opposed to the manual decoupling on some GM products) to reduce parasitic loss. Fuel economy improves to 22 city, 29 highway, and 25 combined for front-drive models and 21 city, 28 highway and 23 combined with all-wheel drive. For reference, the pre-refresh 2.0-liter Edge with front-wheel drive was rated at 21 city, 29 highway and 24 combined and 20 city, 27 highway and 23 combined with all-wheel drive. 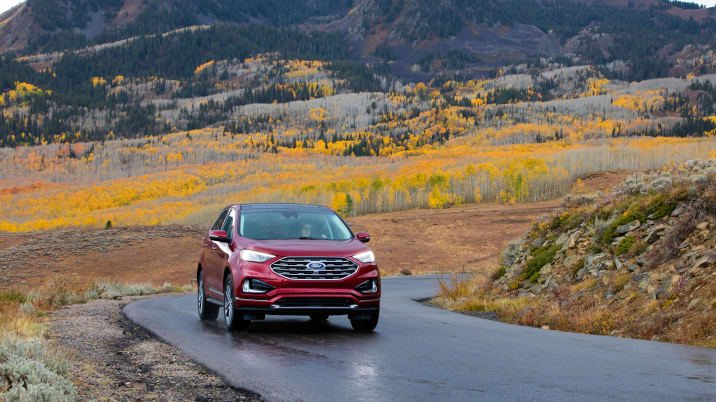 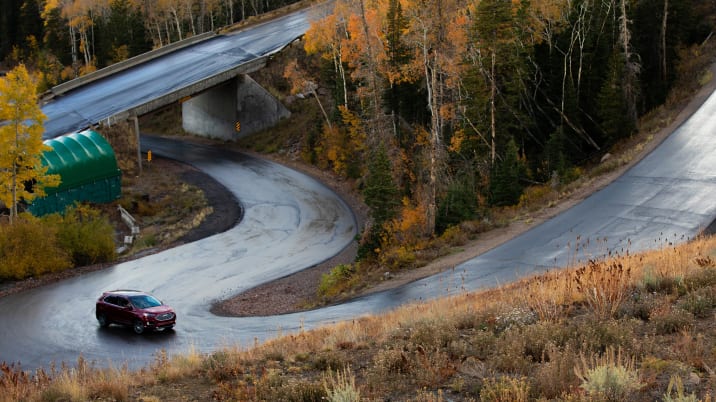 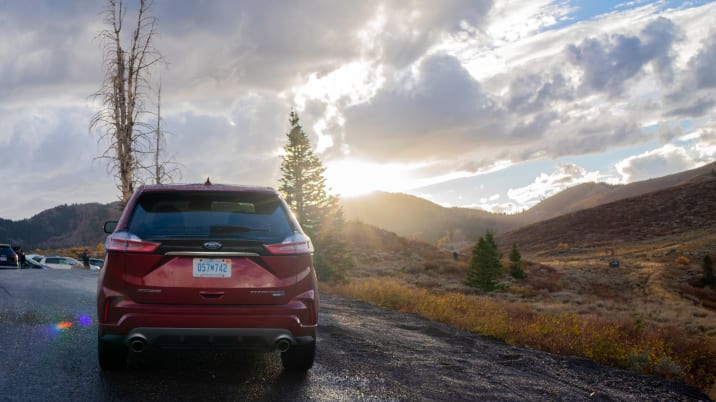 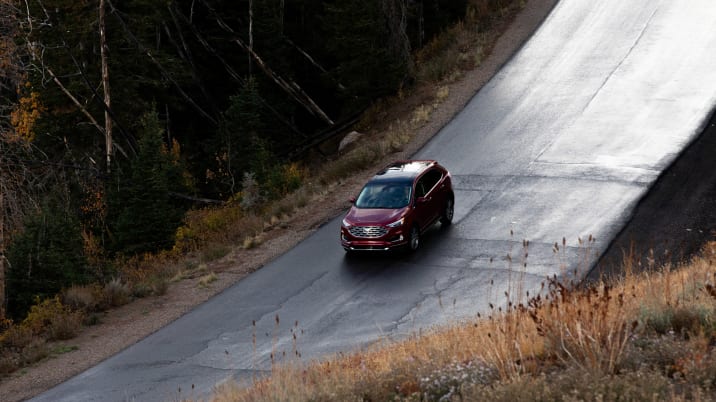 On the road, the Edge moves with the refined grace you'd expect from crossovers with substantially higher price tags. It's remarkable just how quiet the Edge is, thanks to improved sound deadening, laminated windows and improved aero. There's a little wind noise from the A-pillar, but it's really not too bad. At full throttle, the engine emits a small but smooth exhaust note, but it's obvious Ford left the sporty pretenses to the Edge ST.

The ride itself is relaxed but composed, soaking up bumps without wallowing about. Even with some of the larger wheel options, the Edge didn't crash on rough pavement, a problem common among vehicles with such little sidewall. There are moderate amounts of body roll and brake dive, expected but not unpleasant. The steering itself is light and direct, though the lane-centering feature does occasionally tug a little too much on the highway. It can easily be toggled on or off with a switch on the steering wheel.

The powertrain is great, delivering smooth, low-end torque off the line. Turbo lag is nearly nonexistent. Even at Utah's elevation — we were more than 8,000 feet up at some points — the Edge never felt taxed. It's not lightning quick, but thanks to shorter gearing there's ample power for most people's needs. The transmission tuning was excellent, and shifts were mostly seamless. Unlike some transmissions with eight or more gears, the unit in the Edge never felt like it was upshifting early to chase better fuel economy. The transmission always seemed to be right where you needed it when you put your foot down.

It may not be all new, but the 2019 Edge is a marked improvement over the one that debuted back in 2015. The powertrain is smoother and more efficient than before and is balanced by a comfortable yet composed chassis. Factor in the extra standard equipment and you have a compelling offering for those who don't want or need a large three-row vehicle like the Explorer or Expedition. The interior is still a bit disappointing, but it is a comfortable and quiet place to be.

The 2019 Edge is on sale now with a base MSRP of $30,990 for a base, front-wheel drive SE. That's just about the same as the GMC Acadia, the closest competitor in terms of pricing and size. All-wheel drive is a $1,995 option. Prices go up from there, though you can still get a pretty well-equipped Titanium for under $40,000. Those wanting a bit more grunt will have to step up to the $43,350 Edge ST.

Interior complaints aside, the 2019 Edge looks and feels like Ford's most premium product not fitted with a Lincoln badge. That's been the general consensus for a while, but the update really drives that point home. It's quiet and comfortable and the refreshed styling gives it a more premium appearance than either the Escape or Explorer. The loss of the naturally-aspirated V6 is no big deal, as the EcoBoost engine and new transmission offer plenty of refined power.

With Ford dropping passenger cars, it had to reinvigorate the rest of its lineup. Year-to-date sales are down for all Ford crossovers and SUVs, a trend the company can't afford to let continue. Even if it isn't all new, the 2019 Edge forms a solid center to Ford's core lineup. 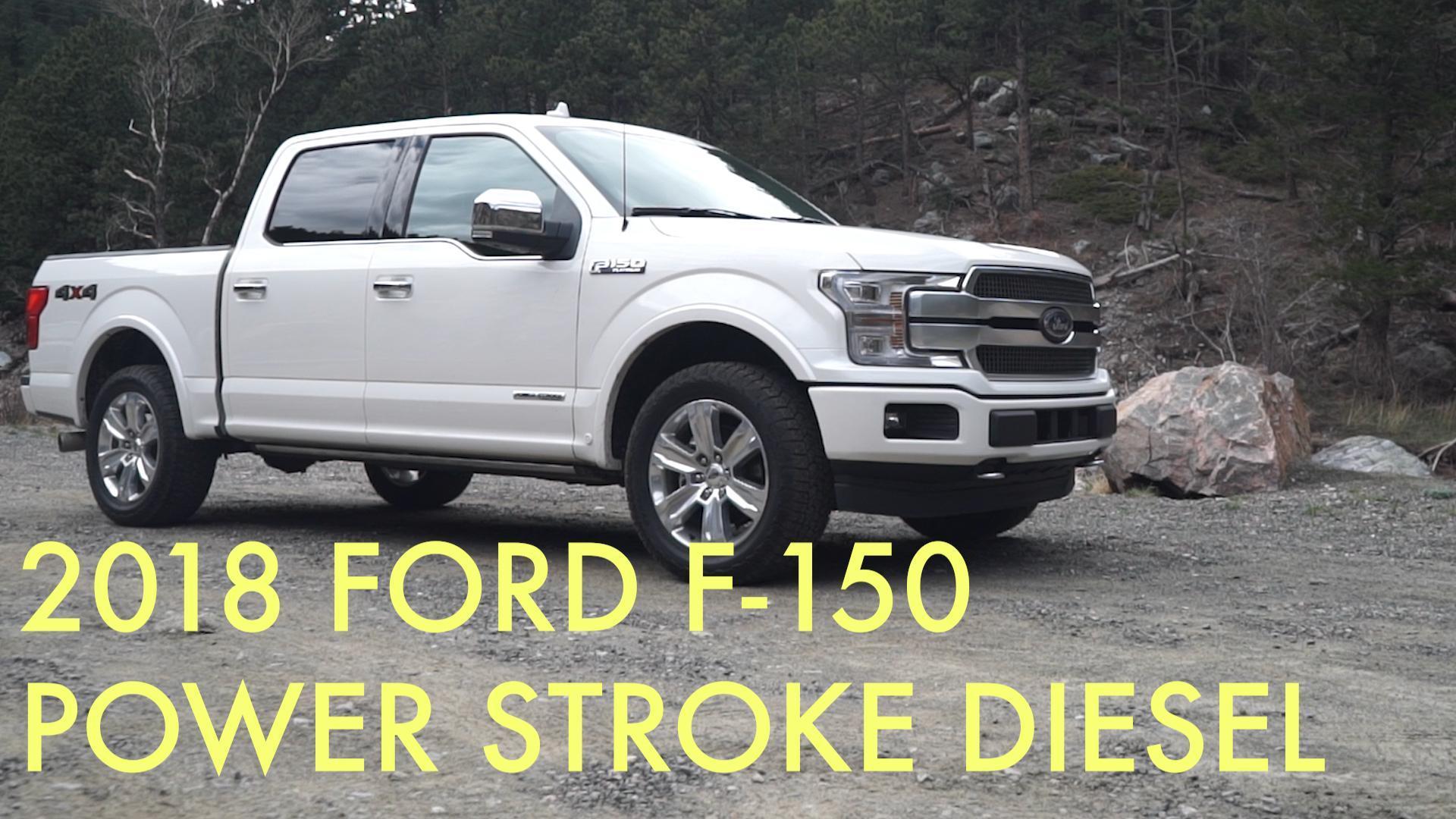