LOS ANGELES — Years ago, when the 2020 Ford Bronco was still just a glimmer in a future PowerPoint presentation, Ford's executives and engineers sought advice from a handful of Bronco and off-road industry influencers to discuss concepts for the coming SUV. According to Icon, company founder Jonathan Ward was in the room to tell Ford what he thought the 2020 Bronco should be. He undoubtedly had some strong opinions on the topic, since his company has been building hand-crafted restomod classic 1966-1977 Broncos that cost an average of $240,000 since 2011.

This wasn't the first time an automaker tapped Ward's brain about a future 4x4. His other company, TLC, began restoring and restomodding Toyota FJ Land Cruisers in the 1990s, and Ward was consulted by Toyota on a project that would eventually become the FJ Cruiser.

Icon is partially credited with igniting the current first-gen Bronco Fever that is fixating the collector car hobby. Classic Bronco prices have been jumping for the last five years, becoming a status symbol for Hollywood celebs like Simon Cowell, Jeremy Piven and Kiefer Sutherland. David Letterman owns an Icon, and it's in the process of building a truck for Joe Rogan. 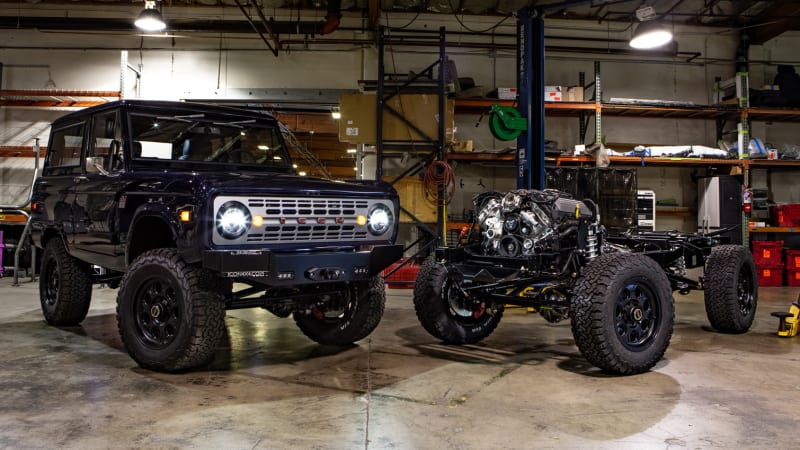 Even so, Icon COO Sherif Yassa doesn't feel Icon's customers will have that much interest in the new Bronco regardless of the execution.

"There's a certain nostalgic appeal to the name Bronco," he tells us in his office at Icon headquarters in Chatsworth, Calif. "But when you get into this price point you want more than nostalgic appeal."

"For some an Icon Bronco is a trophy vehicle that'll never get dirty," says Yassa. "But we have many customers that take their trucks off-road. There's one doctor in Vegas. I don't think his truck has ever seen pavement."

According to Yassa, an Icon build consumes $120,000 in parts alone and 750 man-hours of labor. Icon and TLC build about 50 trucks a year in its 75,000-square-foot shop, including 12 to 15 Broncos. But Icon also does extreme custom builds that cost millions. In process right now is a Hellcat-powered 1970 Plymouth Superbird tribute and a Tesla-powered 1949 Mercury coupe. In the last seven years, it has built 50 Broncos, and there's a waiting list. In the last five years, the company has tripled in size and now employs 50. Order your Bronco today, and plop down the $50,000 deposit, and they'll start creating your Icon in a year. You'll take delivery five months later. 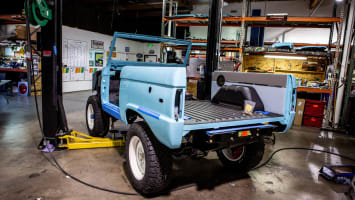 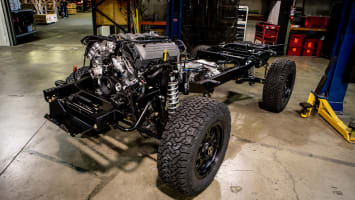 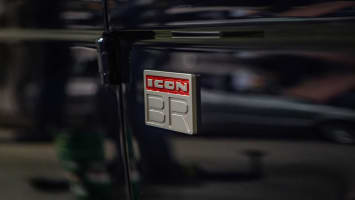 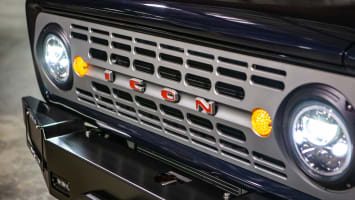 Only the body is used from the donor vehicle, everything else is replaced and the parts list includes an all-aluminum 435-horsepower Coyote crate engine from Ford, air conditioning from Vintage Air, coilover shocks, four-wheel-disc brakes, Dynatrac/Dana 60/44 axles, an Atlas transfer case and a powder-coated Art Morrison Chassis built to Icon specs. Buyers can choose between a five-speed manual or a four-speed automatic, and add other options like remote reservoir shocks from Fox racing, Brembo brakes, ARB air locking front and rear differentials, custom leather upholstery, and various audio and nav systems. And every Icon is shaken down for 750 miles before its new owner lays hands on it.

With 12 inches of shock travel and 47-degree approach and 43-degree departure angles, the Icon's off-road specs are impressive. And with its 87: 1 crawl ratio and big V8 with 400 lb-ft of torque, it should be able to climb the Hillary Step. There's also a winch in the front bumper, but before taking your quarter-million-dollar Bronco rock crawling you may want to install some rock sliders to protect its body.

Before climbing into the company's newest, fully-optioned build, the spectacular paintwork is impossible to miss. The Bronco's big, flat body panels have been sanded perfectly smooth. The panel gaps are tight and even. No Bronco in history left a Ford factory looking this good. 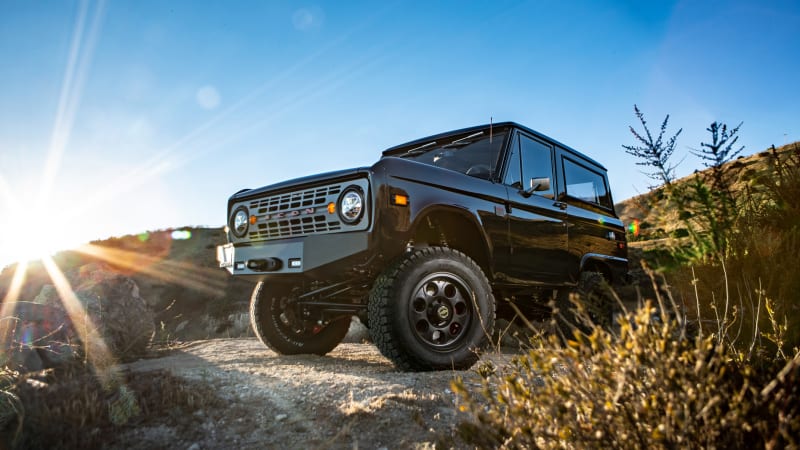 Open the door and a step drops down silently from underneath the rocker. The Icon Bronco, sitting on its beefy 18-inch wheels wrapped in 33-inch BFGoodrich All-Terrain T/As, is nearly 7 feet tall, and it takes some effort to pull yourself into its firm driver's seat, which is manufactured by Bestop.

Inside, the truck is just as finely finished as it is on the outside. The layout remains true to the original and Icon keeps the painted dash, but everything is new and crafted with an artistic eye. You sit tall and look through the top of the windshield. There's a roll bar, a tilt steering column with a column shifter, a fire extinguisher mounted to the floor, power windows and three-point seat belts. Key in and twist and the 5.0-liter double-overhead-cam V8 rumbles through a mandrel-bent Borla exhaust, which can be felt pulsing through the floor.

At 76 inches, the Bronco is nearly as wide as it is high, and at first it feels tipsy on the road, like a stiff wind or an abrupt turn of its steering wheel will put it on its roof. The power steering is very light but quick with a 14.7:1 ratio. The custom gauge cluster by Dakota Digital is down by your left knee. Checking the tach or speed means looking down through the steering wheel spokes and the column stalks. With a firm pedal, the Brembo brakes are perfect — easy to modulate and there's plenty of stop. 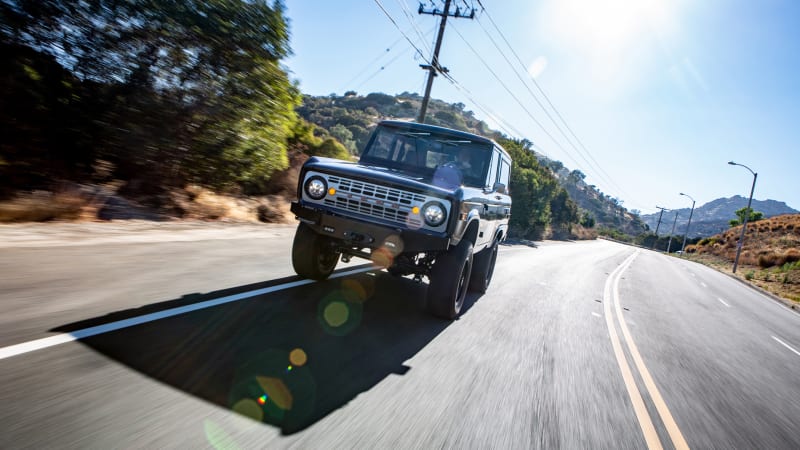 Around town, the Icon is comfortable to drive, but if you're expecting it to feel like a new Range Rover, or even a new Jeep Wrangler, you're going to be disappointed. It still feels like an old Bronco, albeit refined and reengineered. It feels solid, there are no squeaks or rattles. Looking down at the odometer, the truck says it's only been driven 519 miles.

At full throttle there's more rumble and good acceleration. It's not exactly fast, but it moves out well and the four-speed automatic clicks off firm upshifts at 6,500 rpm. Merging onto the freeway is effortless, but the ride gets a little rough above 70 mph and the hood starts to vibrate in the breeze. The Bronco has the aerodynamics of a park bench and the wind noise cranks up accordingly. With its ice-cold air conditioning, nav system and modern powertrain, you could drive the Icon cross country without any drama. I'm just not sure I would want to. 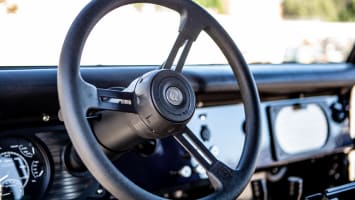 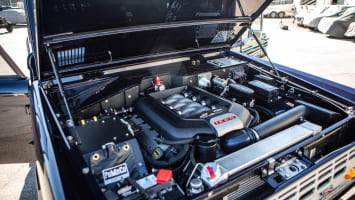 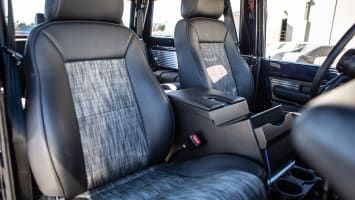 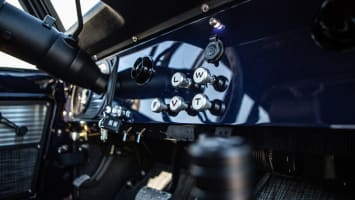 Clearly you can buy or build an old Bronco with similar performance and capability as the Icon for much less money. It will not, however, have the build quality, attention to detail and the artistic execution of the Icon. That's really what you're paying for. That's what Jonathan Ward and his employees do best. You either buy into the Icon mythos or you don't.

As for the 2020 Ford Bronco, we now know it won't be another limp car-based crossover like the new Chevy Blazer. The Bronco will be based on the new Ranger pickup and will have body-on-frame construction — like the originals rebuilt by Icon. Ford has also said the new Bronco will be a "no-compromise midsize 4x4 utility for thrill seekers who want to venture way beyond the city."

Hopefully that's true and the Bronco, which is expected to be unveiled in January in Detroit, will be what it should be: a badass off-roader with an old school vibe to take on the hot-selling Jeep Wrangler.