But don't worry, the driver side back door is still M.I.A.

7.5
View All Specs
Hyundai finally seems to be figuring out driving dynamics. You know, suspensions that don't become flummoxed after hitting a mid-corner heave. Steering that does more than simply exist. A general driving experience that you may actually remember.

Indeed, I'm going to remember the 2019 Hyundai Veloster Turbo, the latest Hyundai group car to demonstrate newfound dynamic talents. Fully redesigned, it picks up its predecessor's funky mantle, bringing over its unique three-door count and unusual hatchback rear, but actually satisfies the "velo" bit of its name. The old car was a dud, this one is not. Well, at least in Turbo guise, as no amount of chassis improvements can make the base 147-horsepower version go anywhere with immediacy.

The Turbo packs Hyundai's 1.6-liter four-cylinder with 201 horsepower and 195 pound-feet of torque. That's pretty much equal to the Honda Civic Si Coupe, as is its curb weight of 2,899 pounds. Though it doesn't sing the same melodically mechanical song as the Honda's, the Veloster's turbo four-cylinder nevertheless delivers a satisfying punch. It responds and feels like it belongs in a vehicle with sporting intentions.

On a mountain road, the new Veloster is capable, poised and legitimately fun. When completing my local mountain road evaluation route, I was compelled to turn around and run it again — the usual indication of a dynamic job well-done. This handling boon also doesn't come at the expense of ride quality. Sure, it's on the firm side, but it's also not crashy or tiresome relative other sporty compact cars. 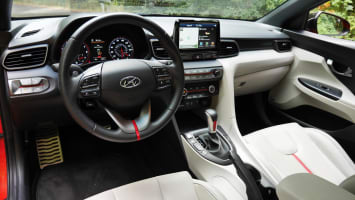 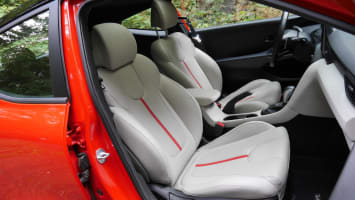 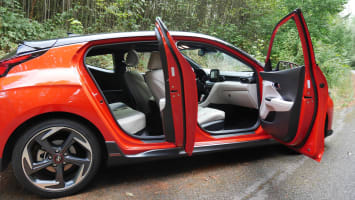 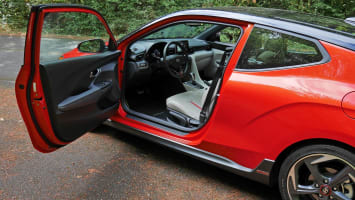 I'd be curious to try it with the Veloster Turbo R-Spec's manual transmission, though, as the regular Turbo's seven-speed dual-clutch automated manual lacks the precision and smarts of VW's DSG and other such transmissions. In Smart or Sport mode, it's not quick enough to respond to throttle or braking inputs, let alone anticipate the need for them. In manual mode, the engine oddly hangs onto revs when upshifting. The tachometer drops down to a lower rev count, but the engine continues to sing for a split-second. It's unusual. Though this transmission performed well enough in a compact crossover like the Kona, a wannabe hot hatch like the Veloster might be asking too much.

That, however, is not why the Veloster ultimately left me cold. While it excels on a mountain road, it is merely OK everywhere else. It just isn't alive and involving enough to make mundane drives a joy — much as a Civic Si or VW GTI can. Comfort and general ambiance are also lacking, and road noise is excessive. The manual-operated driver seat lacks sufficient height or tilt adjustment for taller drivers. The cabin, while it looks great, doesn't possess a surface that's not hard, seemingly cheap plastic. Then again, the Veloster Turbo is about $1,200 less when similarly equipped as a Civic Si, so maybe these deficits would be acceptable to some.

And of course, you can uniquely compare the Veloster to either version of the Civic Si, with its driver side put up against the Si Coupe, while the passenger side takes on the sedan. I've never entirely understood the appeal of this wackadoo three-door body style, but whatever, I'm also not opposed to wackadoo cars. At least I can report that putting a friend in the back seat was easier than if the Veloster was just a coupe. Space back there is also sufficient, although head- and legroom are notably worse than the surprisingly cavernous Civic.

Then there's the styling. Its dimensions are virtually identical to the outgoing car, but it nevertheless appears much longer, lower and sleeker than the stubby and rather bug-like original. There's also something unusual about its profile, and specifically the short rear overhang, that reminds of a Citroen DS. Unusual, in this case, isn't necessarily a bad thing. Neither is the contrasting black roof. Though overused throughout the industry, it works here.

Ultimately, the Veloster Turbo is oh-so-close to being excellent. It's cool and characterful. It can be fun to drive. It's well-equipped for a price that deeply undercuts the competition. However, if paying a little extra meant a higher quality interior, less noise and a more sophisticated automatic transmission, it would be money well spent.