Volkswagen's hot hatch is as good as ever, combining fun and utility in a sharp German package. The interior is starting to show its age, but the GTI is still one of the best compacts around.

9.5
View All Specs
The 2018 Volkswagen Golf GTI, like its forerunners, promises to be all things to all people. It's a quiet and comfortable commuter one day and a corner carving riot the next. It does both of those things without compromising either too much. It's part of the reason that it has remained as popular as it has. It's refined, grown up and far more than the sum of its parts.

Our test car is as basic as it comes. We have a no-option base S model, ringing up for $27,265. That means no leather, no sunroof, no automatic climate control and no upgraded limited-slip differential or brakes. It's powered by Volkswagen's 2.0-liter turbocharged inline-four making 220 horsepower and 258 pound-feet of torque. Power is sent to the front wheels through a six-speed manual transmission.

Editor-in-chief Greg Migliore: The GTI is one of the best values for an enthusiast. It really is. For $27,265, including destination, this VW hatch gives you sharp design, a strong turbo four and an excellent six-speed manual. It's everything you need.

I enjoyed batting around town, whipping through the gears, keeping the revs high and cornering with plenty of speed. It's simply engagement, but it's a feel you don't find in many cars these days. Everything is either over-sanitized or 'roided up. There's not much middle ground for enthusiasts. The GTI fills it nicely. The car is accessible to nearly everyone. Even if you're loaded, you should consider this humble VW hatch for its dynamics. Just get a few more options.

I really like the exterior design. The 18-inch alloy wheels and snappy headlights accent the hatch silhouette nicely. It's tasteful but it stands out. Inside is solid. A touch dated, especially the infotainment, but it's intuitive and clean, which matters more than over-baked touchscreens. The Golf line was just refreshed for 2018 and it remains a solid part of VW's identity. The GTI extends that to enthusiasts.

Associate Editor Reese Counts: One night in this car makes me regret selling my MkV GTI. I mean, I don't really regret selling it (I wasn't driving it as much as it deserved), but I sure as hell miss it. Nothing else combines this level of fun and practicality at this price point. We're testing a base S model and it's nearly perfect. It comes with the tartan seats, no sunroof and the same horsepower as the upper trim models. If you're really going to be pushing the car, the SE adds bigger brakes and a mechanical limited-slip diff.


Goodbye, friend. You will be missed. I hope your new owner loves you half as much as I do. It wasn't easy to let y... https://t.co/Ggv4MFz8ME pic.twitter.com/Y4WIzGYpDT


The GTI so effortlessly quick and fun. The gearing is short and the turbo on the 2.0-liter inline-four spools up quickly. With the windows down, you can hear the nice whoosh sound coming from under the hood. The exhaust makes a nice noise, too. The shifter is smooth and precise. Lay on it and you can consistently bark the front tires on the 1-2 shift. The steering is quick and light, but provides a decent amount of feedback. My biggest complaint is the slightly spongy clutch pedal.

I'm a big fan of the interior, too. Everyone knows the seats are fantastic, but the design is clean and the materials might be the best in the class. There aren't as many storage areas as some competitors — especially the Honda Civic — but that's not a huge deal.

If I gave up driving press cars tomorrow, I think the first place I'd head to would be a Volkswagen dealer. It's quick when you want it to be quick. It's relaxed and quiet when you're cruising. For this price, there are faster cars, there are cars that are better to drive and there are cars that are more comfortable. None of them combine those traits as well as the GTI.

I have two favorites for under $30,000. The first is the Mazda Miata. The other is the GTI.

Associate Editor Joel Stocksdale: There's not a lot I can say here that my colleagues haven't touched on already. The engine is a charmer. It takes a moment sometimes to hit full boost from low rpm, but it has a deep rorty voice and about the perfect amount of power. It's enough that it genuinely feels quick, but not so much that you have to be breaking the speed limit to fully enjoy it. The engine is packed into a playful chassis with loads of grip and composure. Still, you can feel that the tail will play a bit when you want, but not without your say and with plenty of warning. Oh, and of course it's all impressively compliant. For those used to luxury cars, it's a bit stiff, but on the whole, it's quite comfortable.

The interior is mostly nice. You can't not love the plaid seats, which also pack bolstering that keeps you secure, but comfortable. The illuminated red lines on the door trim is a nice nod to the red trim line on the grille. I'll be honest, though, the Golf's dash design has never really done much for me. It's a little too boring, I don't like the weird step down in the plastic surround on the center stack, and as both Reese and I lamented, the power button on the volume knob spins as you turn it, meaning it can perpetually be askew.

Personal nitpicking aside, I do have a more genuine issue with the GTI, and it's that it's a bit pricey. Our base model S, which came with no options, rang up a price of just over $27,000. While it comes well-equipped, there are at least two features we would really like to see included that are only available on the next highest SE trim: LED lights and a mechanical limited-slip differential. Neither are truly necessary, but the LED lights are a massive improvement over the standard halogen lights, and if you plan on doing any autocrossing or track driving, you'll want that differential. And moving up to the SE brings the price to just over $31,000. So the GTI is an all-around excellent car, but you're paying for it, too. 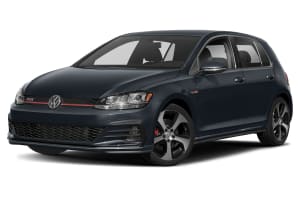