8
The 2018 Hyundai Kona sure is a breath of fresh air. To date, if you were looking for a subcompact or "B-segment" SUV, it was probably going to be a bit dreary to drive with a slow, undesirable powertrain. Mazda's CX-3 is an exception, but its tiny interior is even more Miata-inspired than its driving experience. Really, everything in the segment has at least one fundamental flaw that makes it tough to recommend, and although the new Kona certainly isn't flawless, it's the first member of the segment to provide abundant power, all-wheel drive and a transmission that isn't depressing. After driving a Kona 1.6T AWD for a week, I found it to be pleasantly well-rounded, surprisingly good to drive, and just as competitive as our on-paper comparison suggested it might be.

First, though, the engine. The Kona's standard 147-horsepower naturally aspirated four-cylinder is perfectly competitive in terms of power, and isn't saddled with a CVT or the Jeep Renegade/Fiat 500X's nine-speed box of highly confused gears. That amounts to a win, but the engine to get is the 1.6-liter turbo-four good for 175 hp and 195 pound-feet of torque. That's more than a Volkswagen Golf, and although this Hyundai mill sounds too much like a growly sewing machine under light acceleration, it's an acceptable tradeoff for acceleration that blows the doors off everything in the segment except the 201-hp Kia Soul "!" trim (and that car is front-wheel drive only). Testing from various publications indicates 0-60-mph times in the mid-to-upper-6-seconds range, which would be about 3 seconds quicker than just about everything else in the segment. Some are even in the 10s.

That vast difference is one you'll immediately notice on back-to-back test drives, and an advantage you'll be happy to have in the long run when you consider its estimated fuel economy of 27 mpg combined is equal to the 147-hp base engine – and better than most in the segment. It's paired to a seven-speed dual clutch automated manual that's been been smoothed over from earlier Hyundai/Kia applications, no longer herking and jerking at low speeds, and more responsive to throttle inputs. 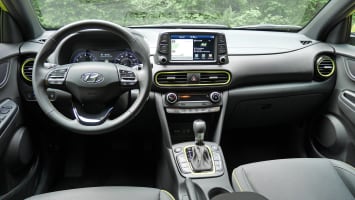 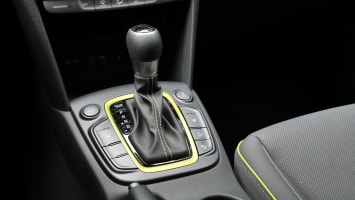 That's the case regardless of the selected driving mode. In past Hyundai/Kia efforts, Normal could be too lethargic, while Sport could feel over-caffeinated. Here, they're actually appropriate for the situations their names imply. I was perfectly happy leaving the Kona in Normal around town, and in Sport, I was truly impressed by how adeptly the Kona zinged through the winding backroad portion of my evaluation route, eagerly responding to throttle inputs, downshifting readily, and perfectly increasing steering heft.
Indeed, the Kona's entire driving experience is yet another example of Hyundai taking great leaps in terms of steering and suspension tuning (corresponding with the arrival of new verhicle dynamics guru Albert Bierrman, formerly of BMW M). Not only is this sub-compact SUV not dreary, it's actually quite fun. Fancy that.

The cabin is both attractively styled and functional. The cupholders and multi-tier smartphone bin are useful, and as a tall person (6-foot-3), I particularly appreciate that the eight-way power seat provides enough adjustability while maintaining an easy reach to the large, easy-to-use touchscreen. In typical Hyundai fashion, you get a ton of features for your money.

Unfortunately, there are a lot of hard, scratchy plastics, even for this segment. The Lime Twist accents that came in our test car help draw your eyes away from those plastics, but you have to order Lime Twist paint to get them. No other color trim is available and without the splash of color, the Kona is likely a bit drab with nothing to distract from those plastics.

Then there's the matter of space. Just as our comparison indicated, back seat legroom is midpack for the segment. I certainly couldn't sit behind myself, but that's to be expected. Headroom was sufficient and those of average height should be fine. Unlike a C-HR, it doesn't feel like a dungeon back there. 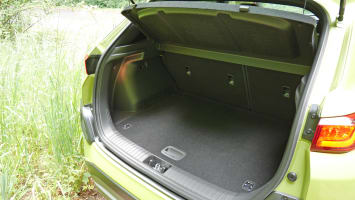 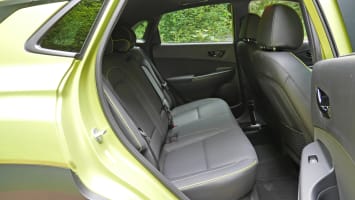 Cargo room is interesting, however. According to the specs, there is about 19 cubic-feet of space behind the Kona's raised back seat. That's only 2 cubes less than the Subaru Crosstrek, which isn't much on paper, but in practice, the difference is immense. I managed to fit two mid-size suitcases, three roll-aboard-size carry-on bags, and a small cooler bag in the back of the Crosstrek. In the Kona, one of the mid-sizers and a roll-aboard had to stay behind. Its cargo area just isn't as deep or useful. Now, I haven't done this same test with everything in the segment, but in my general experience most are closer to the Kona than the Crosstrek – something the specs indicate. Considering that roughly half the Crosstreks I see here in Portland have roof-mounted storage boxes on them, I wouldn't be surprised if Konas will often be similarly adorned.

Then there's the matter of value. You get Hyundai's lengthy warranty and a reasonable price that starts at $25,680 for the Limited trim – the lowest trim that includes the turbo engine. Our Ultimate trim test car with all-wheel drive hit the register at an eye-popping $29,805, but included leather, LED headlights, a sunroof, an Infinity sound system, Apple CarPlay and Android Auto, and a full suite of accident avoidance tech. A loaded Crosstrek doesn't come with as much equipment and costs $30,655. A comparable Jeep Renegade Limited would be at least $31,000. You can't add enough equipment to a Honda HR-V or Toyota C-HR to provide a close enough comparison.

In total, the 2018 Hyundai Kona truly is a sub-compact SUV worth recommending. It may share a common problem with most of its segment brethren – a lack of space – but it easily schools them all with its strong engine and enjoyable driving experience. It also offers abundant value and distinctive style, two things that don't always go together.