CINCINNATI — Kroger Co and Silicon Valley startup Nuro will begin this autumn what they call the first real-world road test of an unmanned delivery vehicle, as the largest U.S. supermarket operator battles Amazon and others for U.S. dominance in fresh grocery delivery.

The test of Nuro's "R1" van, which is shaped like a rounded, silver lunch box, comes as Kroger and other store-based food retailers are racing to catch up with or gain an advantage over online retailer Amazon, which sent grocery sellers scrambling to add home delivery after its $13.7 billion acquisition of Whole Foods Market last year.

Kroger is experimenting with ways to lower the cost of grocery delivery by automating different labor- and cost-intensive aspects of the service, from picking and packing orders to dropping them at homes. Just last month, it struck a deal with British online grocer Ocado to build highly automated warehouses.

Kroger Chief Executive Officer Rodney McMullen told Reuters that the non-exclusive partnership with Nuro, announced ahead of the company's annual shareholder meeting on Thursday, will help shape the grocer's strategy for giving shoppers at its 2,800 stores in 35 states "anything, anytime and anywhere."

"It's one more piece of that puzzle," McMullen said of the Nuro test. No money exchanged hands, and the location of the test city has yet to be announced.

Nuro said it is in the process of gaining regulatory approval for the project.

Nuro co-founder Dave Ferguson called the battery-operated R1 a "considerate, conservative" road user. It is half the width and about two-thirds the length of a Toyota Corolla and will travel at a maximum speed of 25 miles per hour, he said. 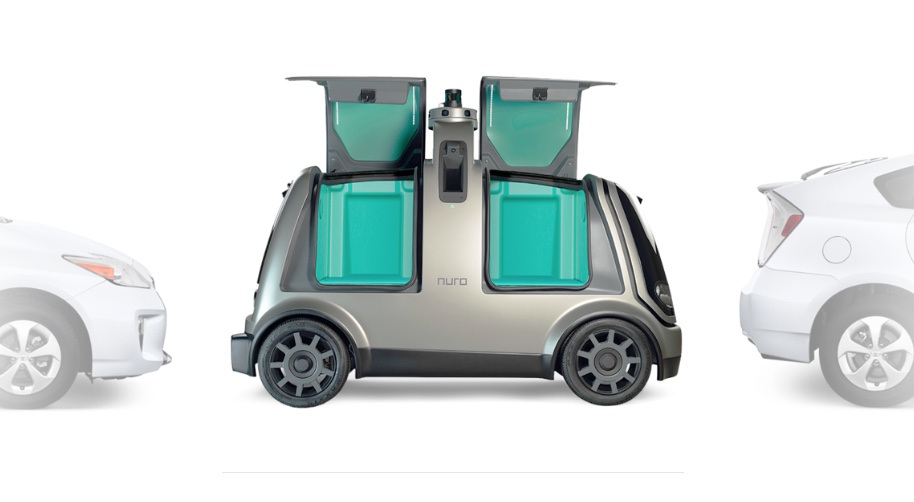 The R1 is larger than the slow-speed sidewalk delivery robots that Starship Technologies has been testing in cities around the world and, unlike many other driverless vehicles, it has no seats for humans.

Customers in the test market will have the option to select driverless delivery when they order groceries from their local Kroger supermarket's website. Kroger and Nuro will tell users when R1 leaves the store and give updates on its journey. They also will provide a code to open the compartment containing their order.

Kroger offers its own delivery service in Denver and works with a broad variety of third-party providers in other markets. Delivery is popular, in part, because it takes the effort and hassle out of carrying bulky or heavy items like large packages of toilet paper or cases of bottled water to and from a car and into the home — something Nuro vans will not do.

Its competitors include Ford, which has partnered with Domino's Pizza and Postmates to test deliveries with its own self-driving cars.