And yeah, it's probably true

Auto sales figures are sort of fuzzy numbers, no matter how you slice them and no matter which manufacturer you're talking about. Unless you're specifically tracking vehicle registrations, automakers generally self-report the figures. So, you have to trust that they aren't doing anything too tricky. Plus, not every sale is equal, as some are logged as dealership loaners or demo models, some go to fleets (like to a rental car agency), and still others are, of course, bought by traditional customers looking for a new daily driver.

With that preamble out of the way, when we saw a tweet from Tesla claiming that the all-electric Model 3 is the best-selling midsize premium sedan in America, our interest was piqued. According to Tesla, market share of the Model 3 has just surpassed the Mercedes-Benz C-Class, which had up until now led the Audi A4, BMW 3 Series, and Lexus IS as the best-selling sedan in its class. Note that the graph from Tesla below is, we think, specific to four-door models. 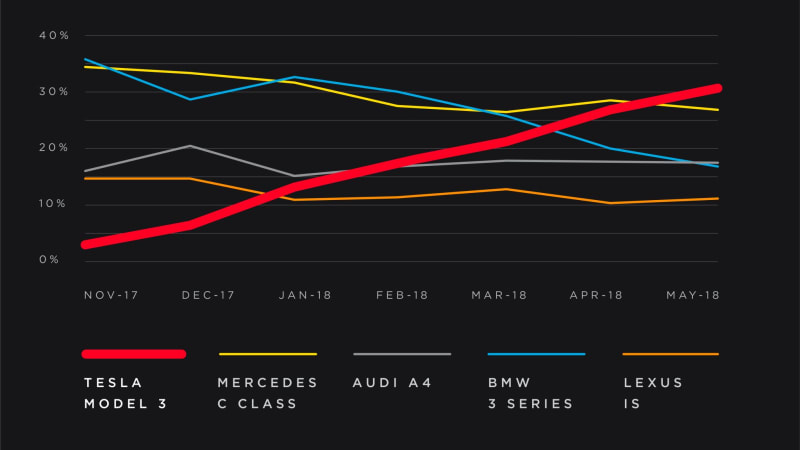 So, is it true? Judging by the numbers we can find, including some from Bloomberg, which has a running chart to track Model 3 registrations, the answer is... probably. We don't know exactly how many Model 3 sedans Tesla is currently cranking out, but Bloomberg estimates production at about 2,560 units per week, and total sales for 2018 at 34,414. We know the number is increasing regularly, though, and Elon Musk has said most recently production sits around 500 units per day, which, on a seven-day cycle, would be 3,500 per week.

We looked up Mercedes' sales figures for the month of May, 2018, and found that the German brand sold 5,419 C-Class models last month, for a total of 23,917 for the year (incidentally, that's down more than 30 percent from the year prior). While the bulk of those sales would surely be made up of sedans, it would also include a small percentage of coupes. Either way, it's likely that Tesla is currently producing and selling more Model 3s than Mercedes is C-Classes.

Now, it's also worth considering if the C-Class is the only vehicle from Mercedes that directly competes with the Model 3. We'd guess customers may also cross-shop the CLA sedan with the Tesla, and if that's the case, you might decide it's worth adding in Mercedes' 2,527 CLA-Class sales last month and 9,622 so far for the year. The same argument could be made for certain versions of the BMW 2 and 4 Series. Still, if you're looking for a direct model-to-model comparison of sales, the Tesla Model 3 probably is the best-selling single nameplate in its class.

Perhaps the most important factoid worth remembering is that Tesla has a massive backlog of Model 3 orders to work through, and even if a quarter of the 450,000 reservations back out – a number that's been reported but we can't confirm – that's a waiting line that any of Tesla's competitors would love to see at the door to its virtual showroom.

Put simply, production of the Model 3 will very likely continue to ramp up, and the vehicle will indeed outsell rivals like the Audi A4, BMW 3 Series, Mercedes C-Class, and Lexus IS by the end of the year. And probably by a significant margin. That's not really news. Still, seeing its market share in a hotly contested vehicle segment pass industry stalwarts has got to feel like a victory for Tesla. And if you're waiting patiently in line for a Model 3 of your very own, confirmation that production numbers are rapidly increasing is even better.