2019 Mercedes-Benz G-Class vs big luxury off-roaders: How they compare on paper

James Riswick
During our first drive of the 2019 Mercedes-Benz G-Class, the all-new SUV's product manager was asked to identify competitors that might have been benchmarked in its development. The look on his face was about the same as if someone had asked him to recite King Lear in Klingon. As far as Andreas Hoeppel was concerned, the G 550 and AMG G 63 doesn't actually have a rival, or at least something the engineers and designers thought to compare it against. The G-Class is a G-Class, who cares what the other guys are doing?

Well, in case you care, we figured we'd plug the new G-Class' specs into the old Autoblog Comparo Generator 3000 (TM) to see how the G 550 and AMG G 63 compare to the Range Rover and its mightiest SVAutobiography Dynamic model, plus the Lexus LX 570 and Bentley Bentayga V8. Frankly, Heir Hoeppel was onto something as each of these is wildly different. But, they do share some common elements: giant size and weight, ultra-lux interiors, and far more off-roading capability than other luxury SUVs offer and any of its owners are likely to ever utilize. Sad.

So enjoy this trip down specification lane, and if you're still left hungry, you can always check out our Range Rover comparison or create your very own comparo. 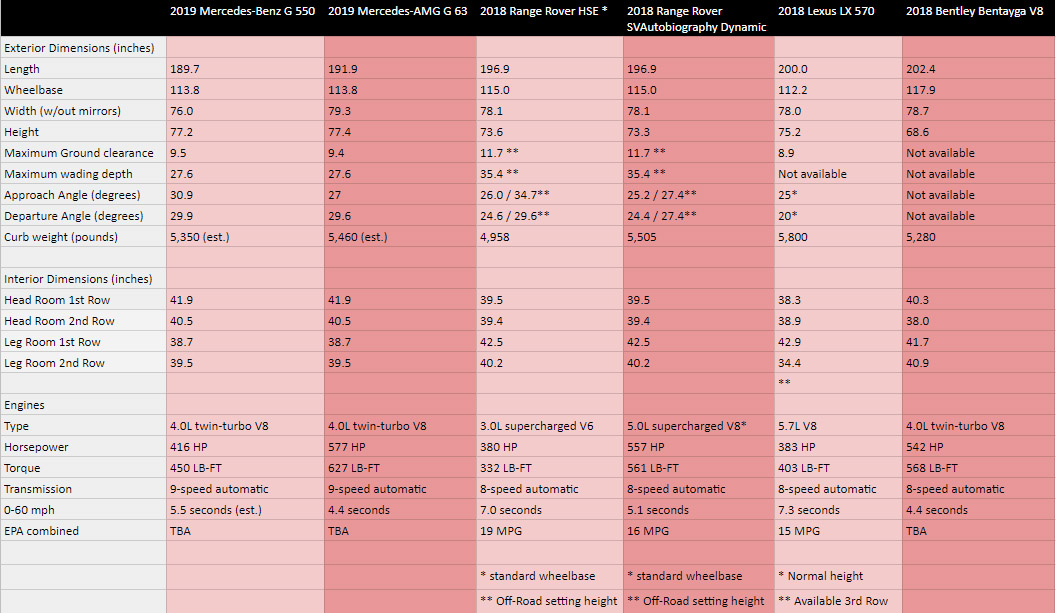 All the fancy off-roading software and special cameras in the world won't do you a lick of good if your SUV is too close to the ground or has low-hanging body work that'll get easily ripped off. As such, check out each of these uber-SUV's ground clearance, approach and departure angles, and wading/fording depths. In this case, the Range Rover has an advantage due to its air suspension that can raise itself into an Off-Roading height that's a whopping 2 inches higher than the new G-Wagen. Sadly for itself, Lexus only provides figures for its air suspension when in normal height. It could match or surpass the Range Rover for all we know (but doubt it).

As Land Rover does provide figures for the Range Rover's approach and departure angles in normal and Off-Road height, you can get an idea of just how much clearance the new G-Wagen has without any fancy (and expensive to fix) raising and lowering air suspension hardware. In fact, its departure angle is better than even the Range Rover's Off-Road height. Bentley doesn't provide any such information despite touting the Bentayga's surprising off-roading talents.

Interior Opulence, They Has It

And now for a break from the facts and figures, some pictures of fancy SUV interiors. Cow and tree lovers look away.

The Range Rover offers a long-wheelbase model that would dwarf the interior dimensions of everything else here. Including it would've also made that comparison chart really confusing, so just know that if you're carting around Dikembe Mutumbo or live in Beijing, it might be the one to consider.

Otherwise, take a look at the new G's rear seat legroom. It increases by a whopping 5.9 inches for 2019, bringing it within an inch of the Range Rover and greatly surpasses the LX 570. We can't underline enough how much of a difference that makes for interior comfort. Front seat legroom also increased by about 2 inches for 2019, but as you can see from the numbers, it's still considerably less than other SUVs and may indeed feel a little squishy for taller drivers. Mr. Mutumbo should definitely stay in the back.

Mercedes-Benz didn't release cargo area dimensions, so we left those out entirely. It's still a giant cube, however, so there's a very good chance it could be the most functional behind its second-row seat regardless of what numbers might say. That seat doesn't fold flat, however, so longer items might be better placed in the others. But who are we kidding? If you can afford a G-Class, just pay for delivery.

As for exterior dimensions, the G-Class is still the tallest thing around and its added width for 2019 makes it more comparable to the other SUVs here. It's a bit longer too, though, it still falls considerably short of the Range Rover (let along the LWB version), the LX 570 and the H.M.S. Bentayga.

The Range Rover is offered with more engines than those listed here, which you can read about here, but we opted to include those that most closely align with the G 550 and AMG G 63. There's also a W12 Bentayga available, but it considerably outclasses even the G 63 in both power and price. Perhaps if Mercedes makes another G 65, though officials made it clear there are no official plans.

How Do They Compare in Pictures?