CIRCUIT DU CHATEAU DE LASTOURS, France — The road ahead is unpaved, rock-strewn and rut-rich. Deep puddles blast murky water across the windshield. Colossal three-blade windmills tower overhead, perilously sprouting like whitewashed redwoods at the outer edges of corners. The urge is to play it safe, to tackle this rally proving ground with the sort of caution you'd normally take off road. But, this is the 2019 Mercedes-Benz G-Class, and to dawdle would be to miss out on the massive capabilities it possesses, which the majority of its buyers will waste on cart-strewn acres of posh parking lots.

So, the foot goes to the floor, the twin side pipes of this Mercedes-AMG G 63 rumble and bark, and we're doing 45 mph. If you're not Sébastien Loeb, driving along seemingly 9 feet in the air while careening across rocks, 45 is damned fast. From the passenger seat, it feels like a ride, which suddenly makes the decision to keep the old G-Wagen's dash-mounted grab handle a sensibly functional feature rather than a vestigial nod to the past. One tends to grab it instinctually as if about to plummet down Splash Mountain.

On this actual mountain in southern France, the new G-Class demonstrates astonishing control. Frankly, the old G could've tackled this same course — literally, as it was used for the original, luxury-lined 500 GE's press launch back in 1990. The G-Wagens produced in the past decade (or the three prior to that) wouldn't remotely encourage the same confidence as the new 2019 G-Class. Its recirculating ball hydraulically assisted steering was heavy at slow speeds, sloppy at higher ones, and the speedometer was vaguer than a questioned politician. The old solid front axle, which was rightly hailed for its rock-crawling ability, has been replaced by a fully independent, double-wishbone suspension that does an exponentially better job at placing the front wheels, maintaining control, and increasing confidence. 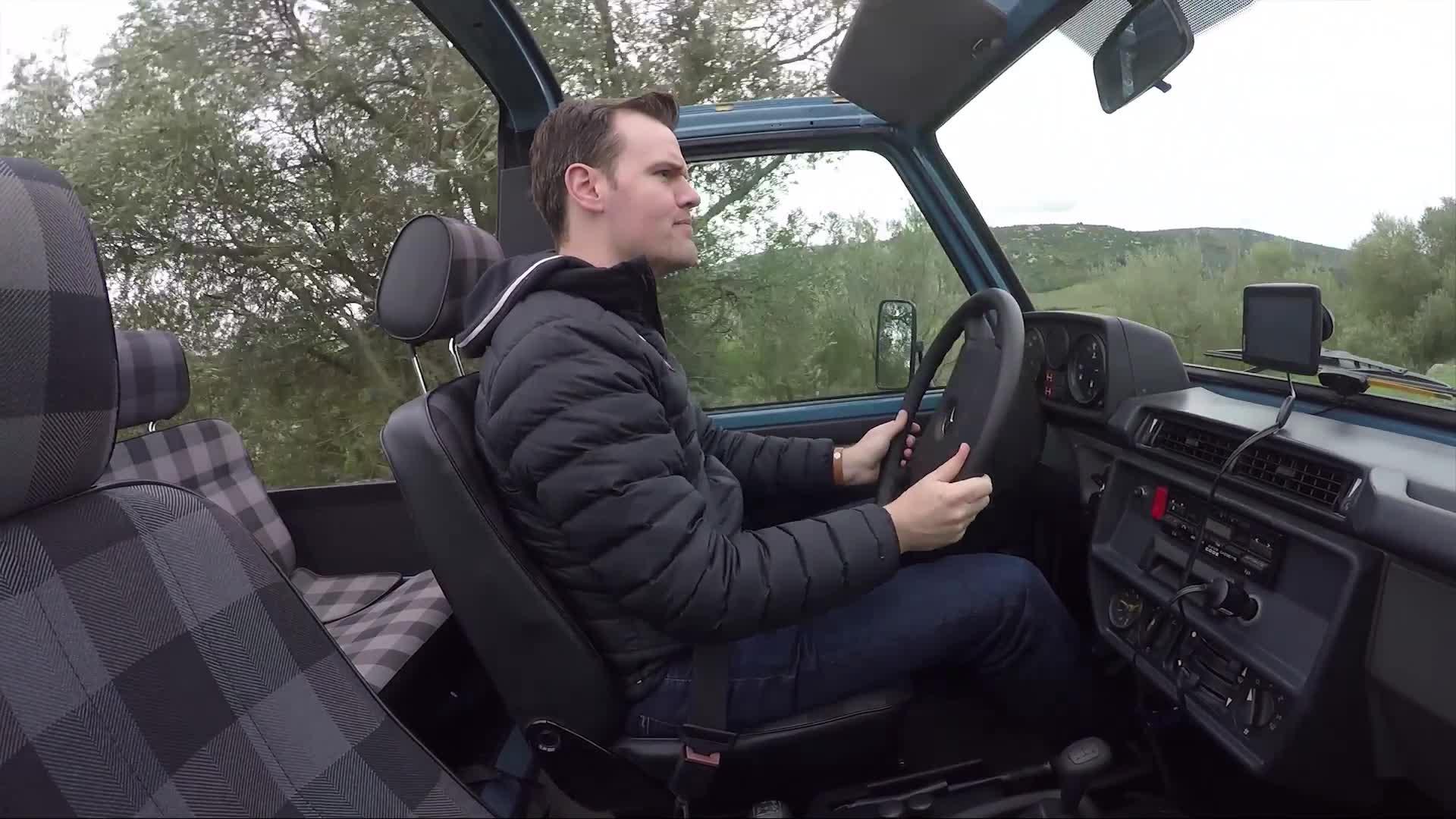 Plus, with a strut tower brace that snakes around the V8 under the hood, front rigidity has been improved. Overall, the all-new G-Class is a whopping 55 percent stiffer than its predecessor, which didn't just look like a bank vault but felt like one too. Massive impacts that would send cringe-worthy shudders through nearly any other vehicle are met with an impregnable solidity. There's no other way to describe it besides "astonishing."

OK, so what about the slower, rock-crawling, go-literally-anywhere capability the G has been known for since the Carter administration? Well, engineers managed to mount that double wishbone front suspension as high as possible to the ladder frame, ultimately increasing ground clearance (9.5 inches, up by a quarter inch), maximum fording depth (27.6 inches, up by nearly 4 inches), breakover angle and approach angle (both by 1 degree). Departure angle stays the same.

A solid rear axle has been maintained, but four trailing arms contribute to improved ride and handling on road (more on that later). Low range also makes its return, as do the locking center, rear and front differentials, which are now electrically rather than pneumatically controlled. The 2019 Mercedes-Benz G 550 does get a new "G" driving mode that adapts the steering, prevents unnecessary gear shifts and manages the throttle to be more appropriate off-road. The G 550 is still an off-road vehicle for off-roading enthusiasts who'll know what all of the above means, and how, when and why to use it. Keen newbie owners should really consider an off-roading course. 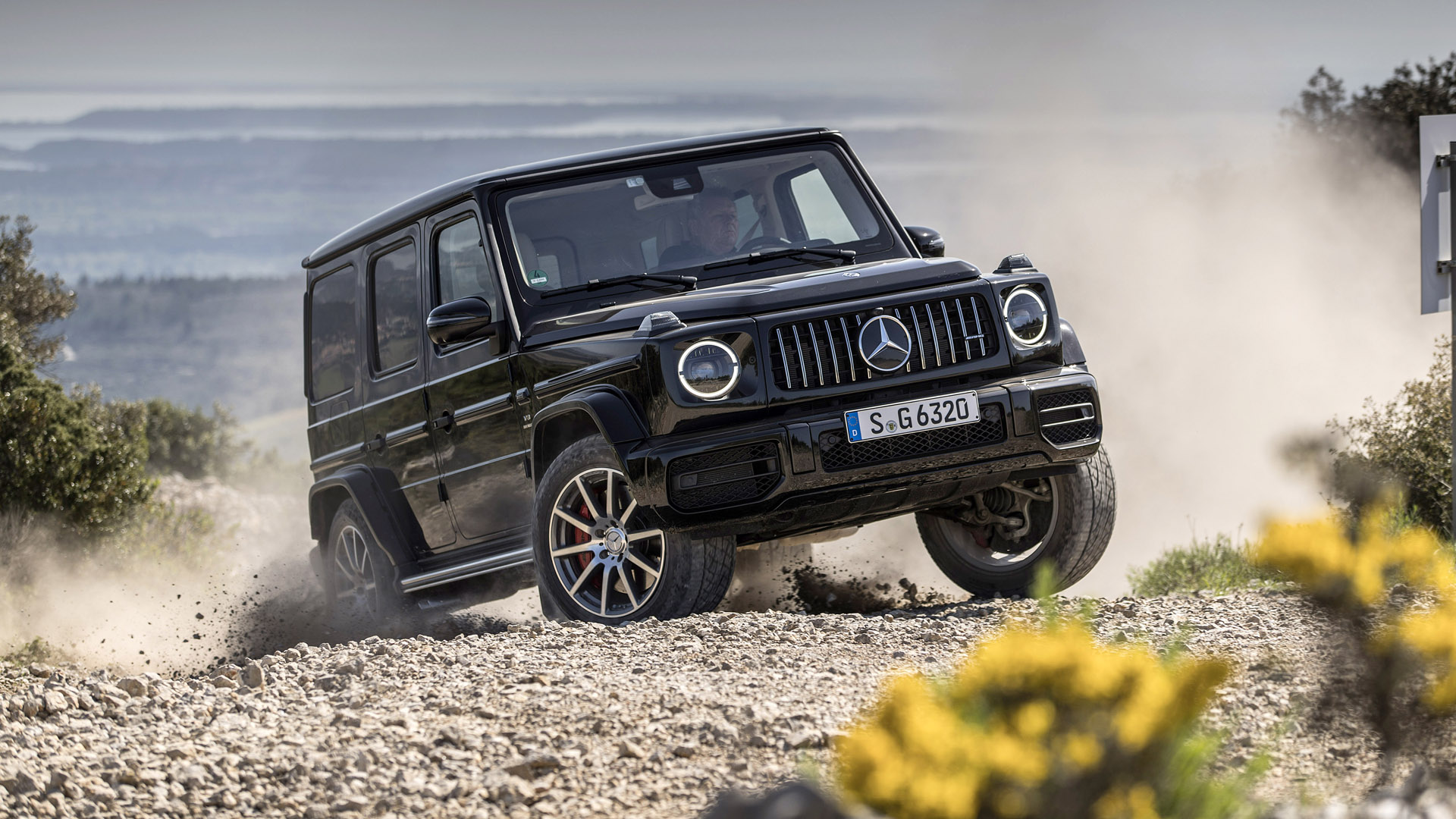 As for the AMG G 63, it has mostly the same hardware and roughly the same clearances (mind those side pipes), but instead of the single G mode, it has Land Rover-style off-road settings of Trail, Sand and Rocks. The changes to the adaptive suspension and steering are particularly noticeable. The G 63 gets this since it's more likely to be purchased by less devoted off-roaders (poseurs, if you must) who would probably be better off with more obviously labeled off-roading choices.

And frankly, regardless of G 550 or AMG G 63, those of the "less devoted" variety will continue to be the majority buyer. For them, it can't be underlined enough how the independent front suspension, improved solid axle and electric steering have radically transformed and modernized what was, to be blunt, a terrible vehicle to drive on-road. Oh sure, it was amusing, and plenty of people put up with it because they liked the look, the impenetrability and the sky-high visibility. 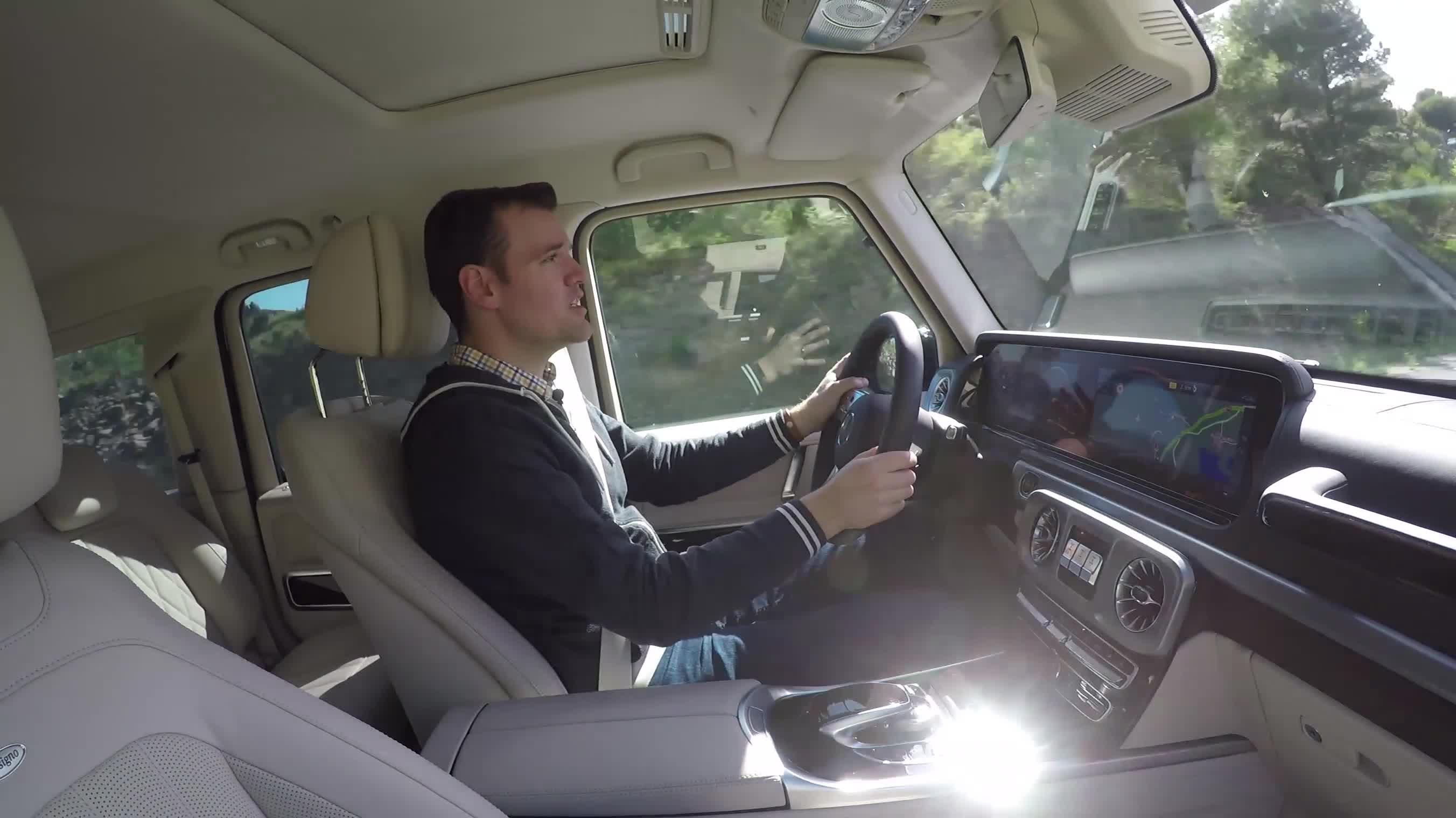 Now, though, those attributes come in a far more civilized and controllable vehicle. Highway stability and low-speed maneuverability are drastically improved. Indeed, those who thought twice about the G-Class before because of its dynamic, uh, "quaintness," will probably give it the green light now. Sure, it's still tall and tippy, the steering is slow, and a GLS is ultimately the easier big Benz to drive, but the trade-offs are no longer egregious.

Now, if that prior dynamic quaintness was the main reason buyers went elsewhere, the old interior was probably the second biggest reason. Extra emphasis on "old." The back seat was cramped, driver legroom could be ankle wrenching, and ergonomics were challenged. One of the cupholders was a mesh sack attached to the center console affectionately, but unofficially, known as the jock strap. That's gone now, replaced by a useful pair of cupholders along with the rest of a cabin that now feels like a genuine member of the modern Mercedes fleet rather than grandpa dressed up in the grandkids' clothes.

The same massive 12.3-inch COMAND display makes its way from the S- and E-Class, along with a second 12.3-inch display that can replace the standard double-binnacle gauge cluster. The rest of Mercedes' extensive infotainment and safety tech menu brings the G fully into the 21st century. The materials are exceptional, with buttery soft leather creatively stitched everywhere in the cabin – even the bank vault swing-gate has diamond-quilted leather trim. Despite this massive lurch toward modernity, a few nods to the past remain. Besides that passenger grab bar, the diff lock buttons are still placed front and center.

Perhaps most important, though, the new G is longer and wider. Its back seat gets a massive 5.9 extra inches of legroom and a luxurious amount of recline. Front seat legroom also increases by 1.5 inches, and although still a bit tight for the tallest drivers, it should no longer be a literal pain point. The new seats are also sumptuously divine when you select the heated, ventilated, massaging and dynamically bolstering Active Multicontour Seat package. As the press release eagerly points out, they come highly recommended by the German spinal health organization "Aktion Gesunder Rücken e.V." So there you go.

Pushing you into those seats are a choice of 4.0-liter, twin-turbo V8 engines paired to nine-speed automatic transmissions (up from seven). The G 550's V8 has been retuned but produces the same 416 horsepower and 450 pound-feet, eliciting a sensuously deep rumble when you prod the accelerator from a stop or move out to pass. It's seriously intoxicating, and the accompanying thrust can make you giggle. Mercedes didn't release a 0-60 time, but given the old, equally powered G weighed about 375 pounds more and hit 60 in 5.8 seconds, well, the new one should be quicker. 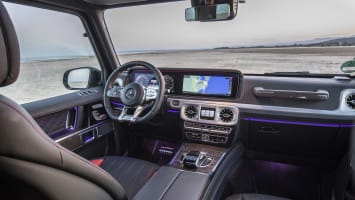 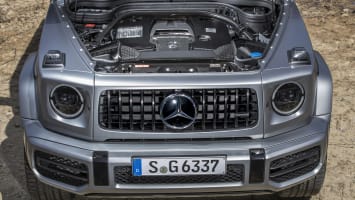 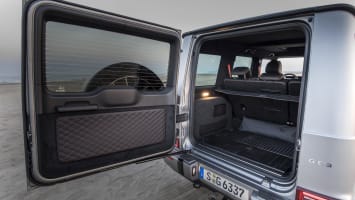 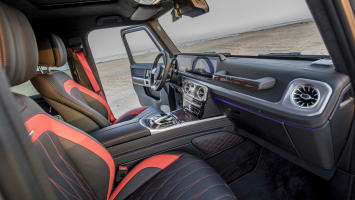 The 2019 AMG G 63 is definitely quicker, as it boasts 577 hp and 627 lb-ft — up by 14 hp and 66 lb-ft from the old 5.5-liter twin-turbo V8. Its 0-60 time goes from an estimated 5.3 seconds to a neck-snapping, Aktion Gesunder Rücken e.V-unapproved 4.4 seconds. Its soundtrack is dirtier, angrier and abundantly bombastic. It gets even more so when you press the side exhaust's "loud button."

Yet, the AMG just doesn't feel right on road. It's hard to complain about extra power, but it's unnecessary, and the AMG's firmer ride and stiffer steering actually make the G worse to drive — the standard 22-inch wheels definitely don't help. It's conflicted, frankly a bit silly (the new red exterior accents really drive that point home), and it's still so tall, tippy and heavy to realistically appreciate any semblance of a handling advantage. Perhaps if you have 56 miles of rally track at your disposal in the south of France the G 63 could prove its worth, but even then, the G 550 is more than capable of enthusiastically attacking the same intimidating terrain on more sensible 20-inch rubber.

As such, it's the cheaper G that's the true masterpiece here: a truck that manages to evoke its iconic predecessor, better its immense capabilities off-road and radically improve its drivability and functionality. Oh, and crucially, it's every bit as cool. 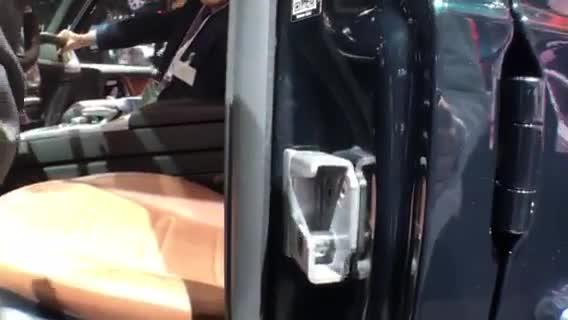